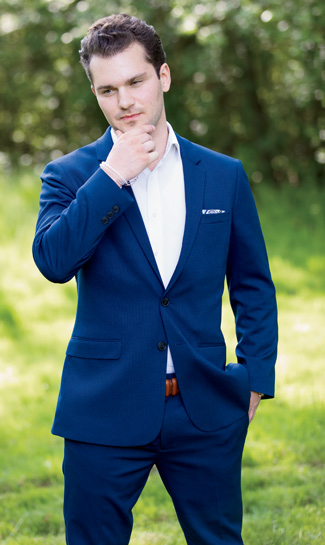 Loud noises rattle Mitchell Hill more than most. At 24-years-old, the Wilmette native endured 42 (and counting) MRI tests to ensure that a brain tumor, discovered when he was 2-years-old, has not returned.

As anyone who’s had an MRI knows, the experience is jarring—stuffed into a tube, unable to move, nothing to distract your mind from the noise.

The majority of Hill’s MRIs were done at Ann & Robert H. Lurie Children’s Hospital of Chicago Outpatient Center in Lincoln Park. The MRI room had sterile white walls and a looming massive MRI machine that rattled nerves as it stopped and started.

“The tests were a very traumatic part of my childhood,” Hill recalls.

Hill thought about how this process could be improved— not only for himself but for others. He knew several members of Lurie Children’s staff and began to ask them questions. 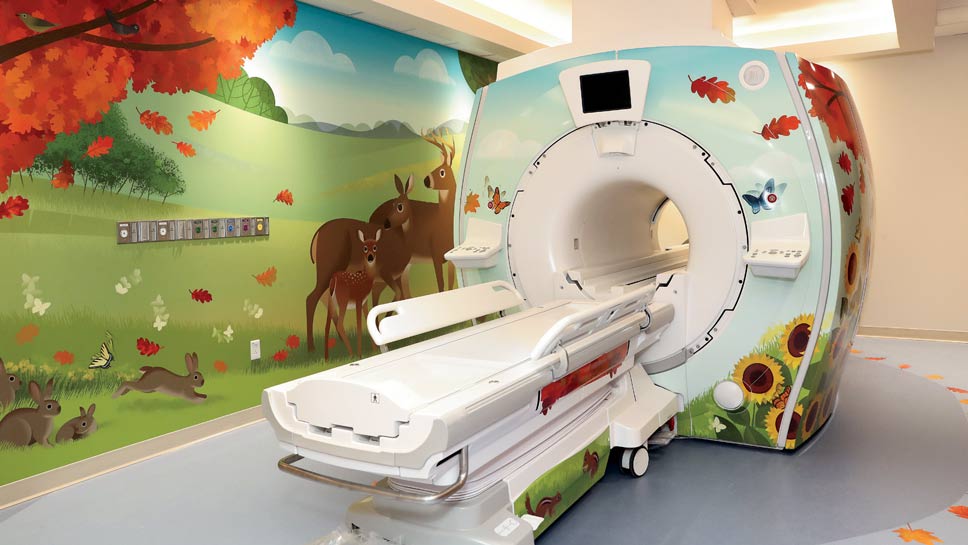 In 2017, he met with a member of the Lurie Children’s Foundation team. They embraced his idea of a more “child-friendly” MRI room but at the time were unable to take on the project.

“So I wrote that one off and thought, ‘okay, it’s a good idea, but it’s not going to happen,’” Hill says.

Lurie Children’s Foundation called Hill and expressed an interest in using similar murals around the MRI machines at its Lincoln Park Outpatient Center. The Foundation gave Hill a dollar figure he needed in order to fund the installation—and he was on it.

Lisa Mulvaney, Arts in Medicine Coordinator at Lurie Children’s, likens the installation process to being a conductor. She coordinates with artists, clinical teams, and vendors who fabricate and print the designs.

“It’s challenging to design illustrations around an MRI machine,” Mulvaney says. “The goal was to transform the entire feel of the room, and most importantly, the child’s first impression.”

“The idea of transforming spaces and making the hospital feel less clinical and more child-friendly is something that has been part of Lurie Children’s mission from day one,” explains Mulvaney.

As Lurie Children’s plans blossomed, so did Hill’s fundraising efforts. He turned to family and friends for the initial funds and managed to raise the dollars necessary for the Lincoln Park installation. He thought that was the end of it. 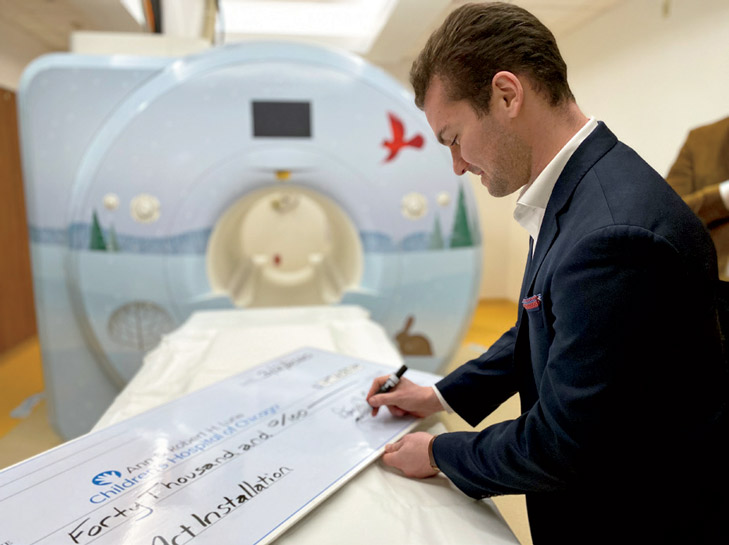 Then Hill got another call from Lurie Children’s. They were inspired by the project’s impact on patients and families and were beginning a renovation of their MRI suites at the main hospital. The rooms were bigger and so were the fundraising goals—$10,000 per room. At the end of the project, there would be 4 MRI rooms.

“I told them ‘yes’ and then got off the phone,” Hill recalls. “I thought, this just went from a reasonable project to a project five times that amount. How am I going to pull this off?”

He realized it would be better to partner with a corporate donor. At the time he worked for Revolution Brewing in Chicago.

“If I was going to reach out to Chicago corporations, I might as well start with my employer,” Hill says.

So he pitched Revolution Brewing’s CFO Doug Veliky. Veliky’s son was struggling with medical issues at the time and he was acquainted with the sterility of MRI rooms. In Veliky, Hill found someone who understood his mission. Veliky became a huge advocate and fundraised 76 percent of the project’s goal.

As of now, Hill says he and Veliky have helped transform five MRI rooms at Lurie Children’s.

“For 25 of my 40 tests, I had to be sedated because I was so anxious,” Hill says. “And coming off the anesthesia, as my mom will attest, was pretty extreme.”

“We want the designs to appeal to kids of all ages,” Mulvaney elaborates. “There’s also walking the fine line of making the designs friendly and engaging, but not overstimulating for kids who may have sensory issues,” she explains.

This past September, Hill’s journey came full circle when he needed an MRI at the Outpatient Center in Lincoln Park, the first location that he helped transform.

“There’s a big window that leads to a room full of doctors controlling the machine you’re about to go into—almost as if you’re the subject of an experiment,” he notes. “With a fox decal, you can’t see the doctors in the other room, which I thought was quite pleasing.”

It appears that Hill has out-foxed some of the MRI room anxiety.