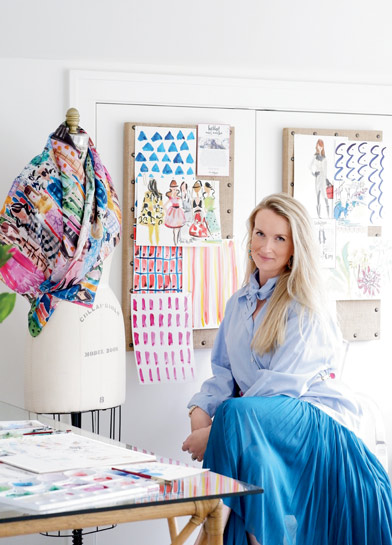 Nippert in her studio PHOTOGRAPHY BY MARTHA NIPPERT/MARNANI DESIGN STUDIO

In 2014, while living and working in Manhattan as a designer for celebrated luxury fashion label Michael Kors, Midwest-native Martha Nippert found herself live-painting, street-style outside Lincoln Center during New York Fashion Week. Her work went viral on social media and less than two weeks later, the legendary late fashion photographer Bill Cunningham caught Nippert through his lens outside a show. The rest, as they say, is history. 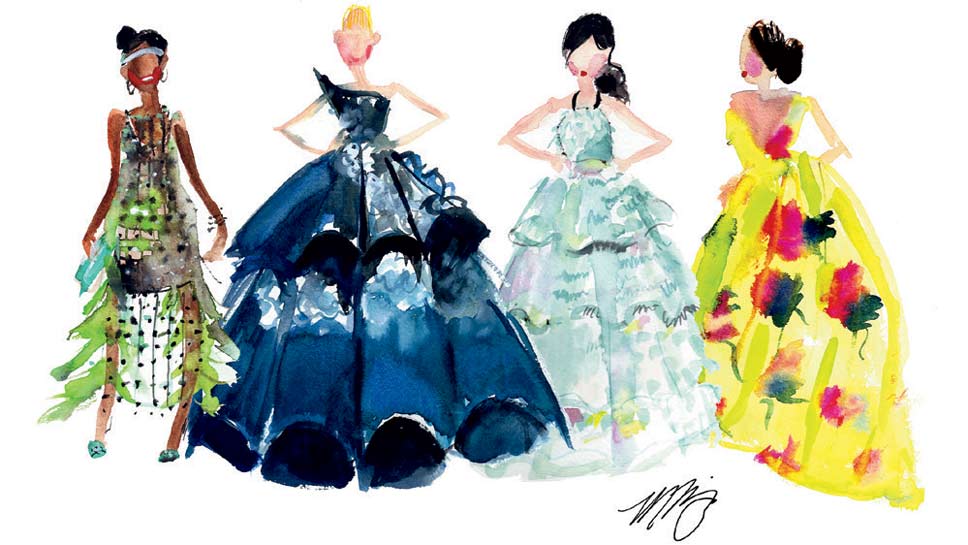 But Nippert’s illustrious career as a professional artist, illustrator, and designer was not predestined. In fact, although she received a Presidential Art Scholarship to Wake Forest University, she enrolled with plans to study medicine before eventually switching gears to pursue fine arts. In 2009, she moved to New York City post-graduation for an advanced degree at Parsons School of Design.

And after landing a coveted internship with Michael Kors, she got hired, and quickly rose through the ranks and was soon promoted to Senior Designer.

“I worked long hours and found time to illustrate at night and on the weekend as a side hustle,” says Nippert. “Working at Michael Kors was an incredibly valuable experience and gave me a lot of credibility in the industry but, ultimately, the role was not as hands-on creative as I would have liked and was more about reinventing the successes of the previous season.” 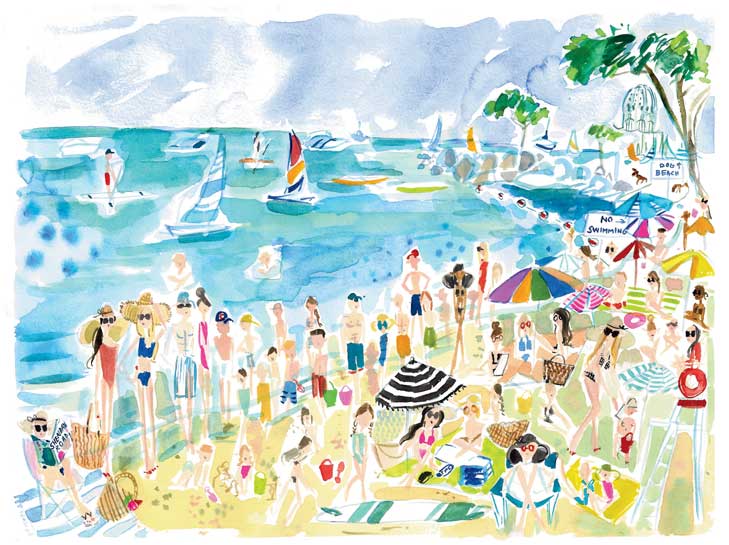 All that’s to say Nippert successfully capitalized on the momentum from Fashion Week, leaving her stable position with Michael Kors to relocate to Wilmette and pursue full-time entrepreneurship with her namesake brand Marnani Design. Today her watercolor work has been seen in national advertising campaigns, on apparel, and in privately commissioned family portraits.

She counts brands ranging from David Yurman and Gap to Barneys New York and Neiman Marcus as clients, and she’s become known for her sophisticated use of color, whimsy, and joyful expression.

“I have always been attracted to color,” she says. “Not every day is rainbows, and we all face challenges in life, but the way I escape from that is through color. I love walking through the Impressionism wing at the Art Institute of Chicago. My work is meant to be fun, and I try my best to capture happy energy.” 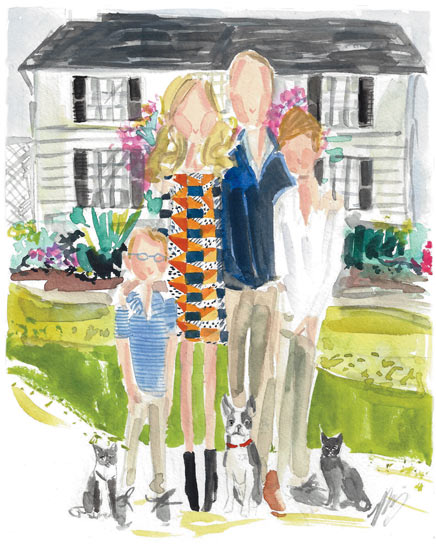 That said, in the home Nippert shares with her husband and two daughters, ages 1 and 4, Nippert added an attic studio space that she describes as light and airy. Perhaps the blank canvas is what allows her work to pop and creativity to flow, although Nippert explains there is a wall dedicated to her children’s artwork. They, of course, love to paint with Mom.

“I was honestly caught off guard by how much I love being a mom,” says Nippert. “My biggest challenge is how to fulfill my role as a mom and be fully present for my kids while still showing up and maintaining my career as part of my identity. Being an artist is part of who I am and is not just a paycheck. I want them to see that.”

Nippert’s connection to motherhood and her bond with her own mother made a recent collaboration with Old Navy that much more special. In honor of the 101st Mother’s Day, the brand approached Nippert to illustrate 101 portraits within a two-week period. The pool of submissions included women’s shared memories with their moms or memories of being a mom for Mother’s Day. Tasked with translating a brief prompt and a few photos into a keepsake memory, Nippert drew upon her human connection to the project. 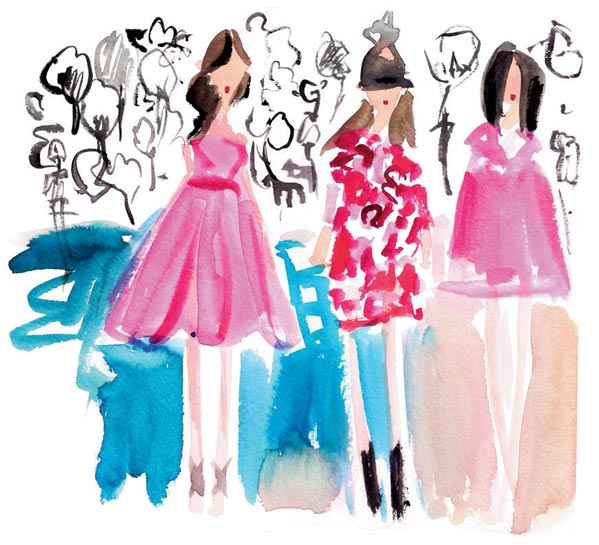 Another meaningful partnership came from women’s fashion retailer Talbots and breast cancer organization Susan G. Komen, one that allowed Nippert to honor her mother as a breast cancer survivor with a limited-edition ‘Martha’ scarf in a custom design that benefitted the nonprofit.

“It was a highlight of my career thus far to walk into Talbots with my children and tell them that they can grow up to see their work on a national stage someday, too,” she shares. “My mom has been cancer-free for more than 20 years and is the strongest person I know. The collection ended up selling out in stores and online but, to be fair, I think my mom bought most of the stock.”

Oh, and did we mention that Nippert has been commissioned by the First Lady, not once but four times? She was so surprised by the initial request that she thought it was a prank call. Nippert has now designed the official poster for the White House’s annual Easter Egg Roll for four years running. She also let us in on a little secret—each year she includes her daughter’s fingerprints in the poster masquerading as colorful eggs on the White House lawn. She hopes that the girls will always have that memory and be a part of history. 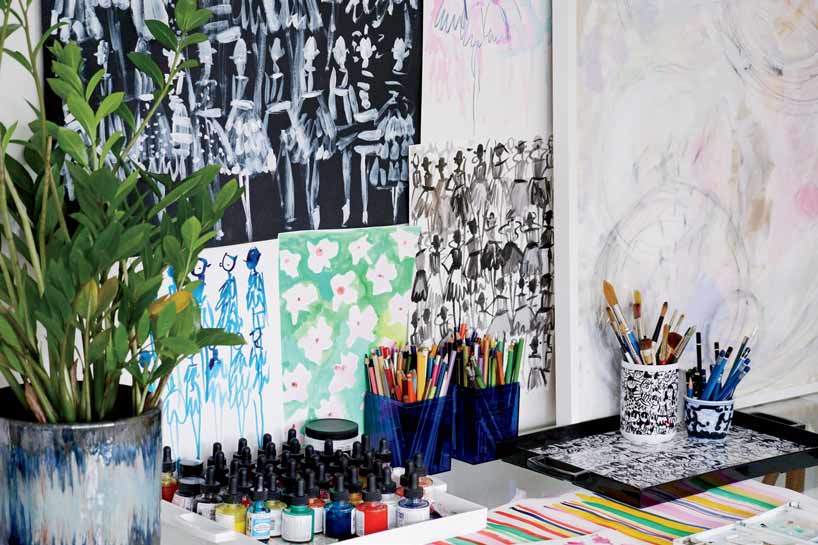 In addition to her corporate clients, Nippert also has her own collection of homewares, apparel, and paper products with plans to “blow up that part of the business” and expand the line into the apparel, textile, and kids’ categories soon.

“The ball keeps moving, and I am always evolving,” says Nippert. “I continually ask myself what’s next and still consider myself at the beginning of my career, not the end. I’m not yet ready to peak.”

You heard it here first: Nippert’s one to watch.