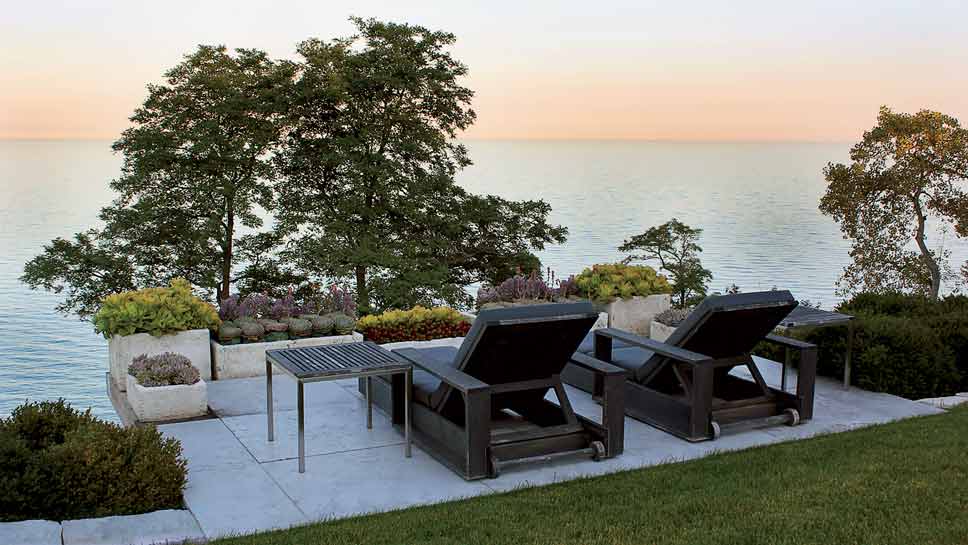 The bluestone overlook is framed by custom made planters filled with succulents, creating an unobstructed view of Lake Michigan. PHOTOGRAPHY COURTESY OF ROCCO FIORE & SONS

It is not often that one defines a successful business as operating in only a 15-mile corridor, but that unique aspect truly defines local landscapers, Rocco Fiore & Sons. A notable presence on the North Shore since 1947, their story is one that embodies centuries-old European ideals.

Immigrating to America from Italy in 1938 at 17-years-old, Rocco Fiore brought with him a passion for horticulture and a natural sense of space. Raised in Valenzano (in Italy’s Puglia region), Rocco’s interest in plants developed “in the old country, where they grew grapes, olives, and figs to sell at the open-air markets,” his sons Rocco Jr. and Steve explain. Settling in Highwood, Rocco initially worked at his uncle’s nursery. After noticing the increasing popularity of family-oriented suburban neighborhoods, Rocco seized the opportunity and started his own residential landscape design and maintenance company in 1947. 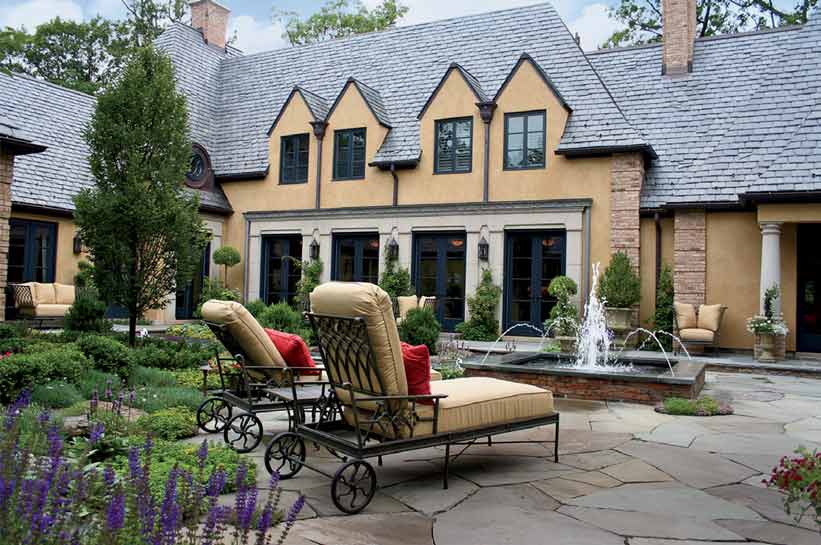 Rocco’s business began as a small venture run out of his home. In that era before the ease and efficiency of modern machinery, “it could take two days to mow the large lawns common to the North Shore,” his sons note. Truly a family business, Rocco’s wife, Rose, was an integral part of the operation. “Mom was dad’s bookkeeper, receptionist, and scheduler—she did everything,” says Steve, including caring for their three children Rocco Jr., Steve, and JoAnn.

In the nascent days of the company, formal training was non-existent—a hurdle which proved unproblematic for the innate talents of Rocco, who learned as he went and was a natural at all things plant-related. Tapping sugar maple trees in his nursery, Rocco would boil down the amber liquid in his kitchen until maple syrup emerged ready to accompany family breakfasts. After dinner, his sons recall their father heading to the backyard nursery to work on grafting plants. And every winter, Rocco would make wine and paint landscape scenes. “The Italian way of life which revolves around family, was so prevalent in our childhood,” remembers Steve. “It centered around the dinner table and the outside garden, where half the land was devoted to color and the other half to vegetables.” 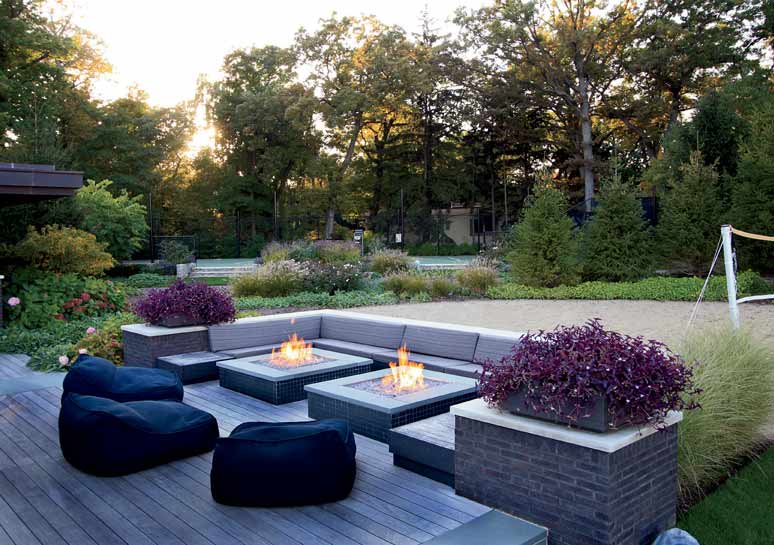 “We still do things the old-fashioned way,” says Steve. “We want landscapes to evolve and look great 20 years from now, not to look great for 5 years and then start again.” To achieve this, designs are environmentally sensitive and focus on the use of native plants. Planting plans are full of depth achieved through layers of groundcover, shrubs, perennials, and trees; bare soil can rarely be seen. Each element coming out of their talented mason shop, from bluestone walks to custom garden features, is constructed with the old-world craftsmanship and knowledge that Rocco brought from Italy.

Rocco Jr. believes the guiding principles of the company, originating with his father, are what contribute to their longevity and set them apart in the industry: produce the ultimate quality of work, deliver the highest standard of service, and assure good value through cost-effective design. This ethos has led the company to serve families across three generations, truly a remarkable feat. “In some cases,” says Rocco Jr., “we’ve been on a property for 70 years, through three or four owners. I remember seeing kids in diapers who are our clients now.” 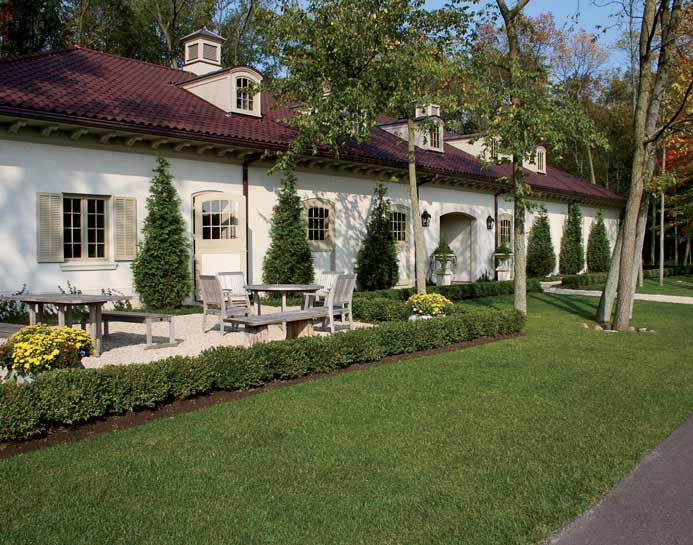 Trimmed boxwood hedges frame the horse stables and enclose the crushed stone terraces where spectator seating can overflow into the lawn panels during the owner’s polo matches.

From history-making events attended by Presidents Kennedy and Nixon to intimate garden weddings, Rocco Fiore & Sons has ensured their clients’ landscapes are well-prepared and polished to a sheen, ensuring a picture-perfect environment. The company also places an emphasis on giving back to the local community. For their 60th anniversary ten years ago, the company donated shade trees to local communities along the North Shore—beautifying the towns entrusted to them by their clients.

Rocco Fiore & Sons is now a sizable operation with more than 300 employees, run by Rocco Jr. and Steve. Following their father’s vision, the sons have cultivated a group of talented employees. The company, with the dedication of this group has received national and state awards based on design, construction, and maintenance. Owning and managing a nursery operation with 20 acres of plant material in Antioch and 200 acres of shade trees in Bristol, Wisconsin, the company encompasses all aspects of the landscaping business. Abiding by Rocco’s motto of, “Take your time, do it right the first time,” surely guarantees the company will be serving a fourth generation of clients.