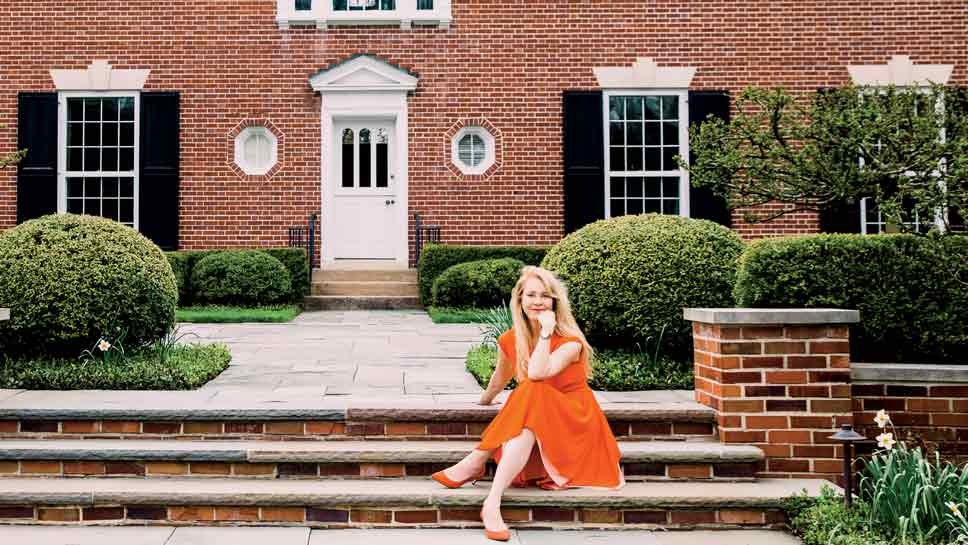 The North Shore’s Elizabeth “Liza” Yntema descends from a storied line of relatives best described as, Yntema tells it, “life-long troublemakers.” Take Yntema’s ancestor John Proctor, who was hung as a witch in Salem. Yntema notes that the family maintains it was a “land dispute.” Or her grandmother Jean Busey, an early environmental and civil rights activist who referred to herself as a suffragist, and very rare for the times, graduated from the University of Illinois in 1920 with a Bachelor of Science degree in chemistry.

One of the stories that most dominated Yntema’s childhood, however, stems from her great grandfather, who helped found the Busey Bank in Champaign-Urbana. Prior to the Great Depression, he paid out his depositors on at least three occasions during financial panics. “I was told that story repeatedly growing up as a reminder of what integrity looks like,” says Yntema.

Later generations will likely hear tales of innate integrity within Yntema herself. When we were first introduced to Yntema for her 2017 profile in Sheridan Road, we learned of her commitment to philanthropy and dogged pursuit of gender equity, especially in the arts community. She has been a long-time supporter of organizations from the Chicago Park District, the Joffrey Ballet, and Hubbard Street Dance Company, to the Harris and Auditorium Theaters, and Holy Trinity High School. She also currently serves on the Board of WTTW, the Chicago Shakespeare Theater, and the Advisory Council for the Trust for Public Land. Yntema is also a sponsor of the ABT Women’s Movement program, a multi year initiative to support women in choreography. 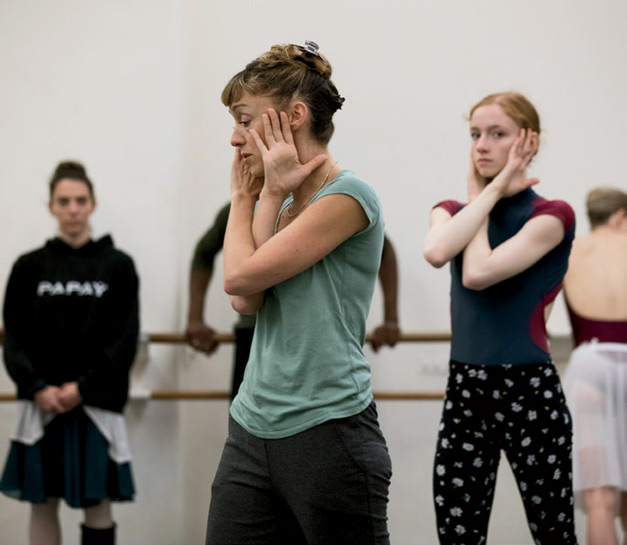 And, although she initially resisted starting her own nonprofit, she launched the Dance Data Project® (DDP), in 2015 to highlight the persistent gender opportunity and funding inequalities in classically based dance.

“No one else was producing the data demonstrating the lack of female equality in ballet—an across the board phenomenon in the arts sector generally,” explains Yntema. “Deciding to create DDP was grounded in a systematic needs-based analysis—although I was, and still am—“good and mad.” Yntema offers, “I am not even close to brilliant, I just listen carefully, and respond well to new information and better ideas.”

This spring, DDP released its second, updated Artistic & Executive Leadership Report, which demonstrates persistent gender inequity among artistic and executive directors of the largest 50 ballet based companies in the U.S.

The new report shows women earn only an average of 63 cents for every dollar their male counterparts receive as artistic directors. In addition to being significantly underpaid compared to men, DDP’s updated study demonstrates that women are underrepresented in artistic leadership, holding only 25 percent of positions within the largest 50 companies. That number drops to 10 percent for the biggest ballet companies, who together account for 62 percent of the overall top 50 company combined budgets. 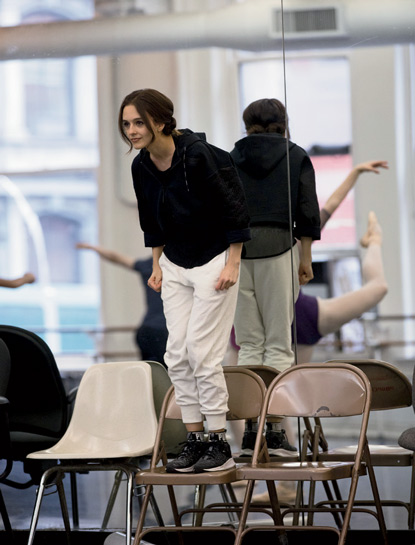 Choreographer Lauren Lovette in rehearsal with ABT Studio Company. Photography by Rosalie O’Connor

“Now that we have provided the statistics, our next hill to climb, is to jump-start a discussion that encourages donors to consider gender equity when making gifts,” says Yntema. “That doesn’t mean things will change right away, but what it does mean is those who deny there is an industry-wide problem are out of excuses.”

Passionate about being an agent for change, versus simply writing a check, Yntema and her husband Mark Ferguson approach their philanthropic portfolio as they do their financial investments, and advise others to do the same. In fact, through DDP, Yntema has created a template titled #AskB4UGive, that highlights what donors should consider before giving away time or money. The idea? You can, and should, ask questions.

“How will my money be used? Is the organization run efficiently? Does it learn from its mistakes or execute on its Mission Statement? Does it promote women or engage communities of color? How does it deploy its resources? Does it utilize volunteer time well?”—all fair game, says Yntema.

“The problems in the world seem unending and overwhelming, and one response is to declare matters hopeless and refuse to donate at all,” explains Yntema. “A second approach is to reflexively give when asked without an overall strategy.”

The best way, she goes on to say, involves developing a philanthropic budget, clarifying areas of particular interest, deciding how much time, talent, and treasure you and your family can devote, and then sticking to your guns and saying “no” when necessary.

The framework is one that will be even more important as the world recovers from the impact of the COVID-19 outbreak. “You are not paying attention if you don’t care about what happens to women in this economy—they represent the sole, co-, or primary breadwinners in 64 percent of U.S. households.”

The performing arts industry, one dependent on the public’s willingness to gather, may never look the same. What ballet needs to survive, says Yntema, “is new voices and female perspectives that will attract younger audiences.”

“Women respond to stories told by women,” she says. “They show up, spend money, get enthusiastic, and then bring their friends.” 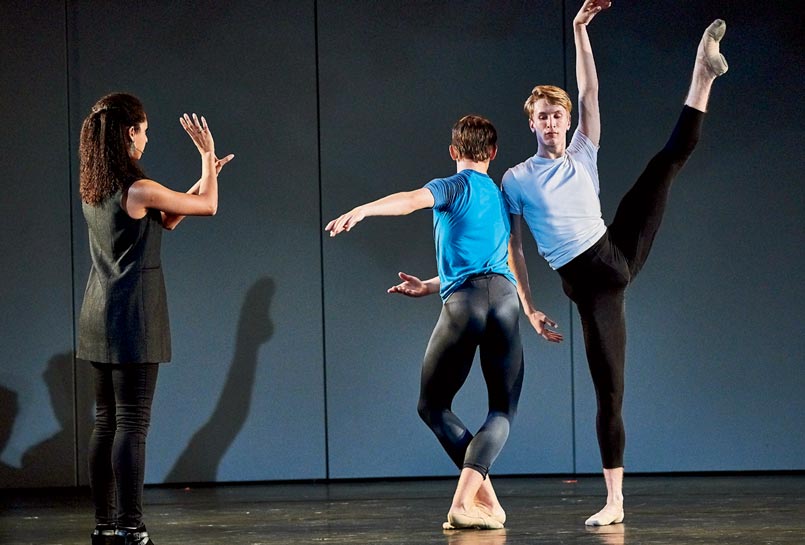 Choreographer Claudia Schreier in rehearsal with ABT Studio Company. Photography by Robert Altman

Yntema found her community of women when she moved to Chicago (for love) and joined the Junior League of Chicago (“JLC”). She counts former JLC President Judy Bross as a continuing inspiration, along with Winnetka philanthropists Ambassador Fay Hartog-Levin (Ret.) and fellow arts patron Alexandra Nichols. In the nonprofit sphere, she admires the transparency, integrity, and managerial approach of Barbara Gaines (founding Artistic Director of the Chicago Shakespeare Theater), Sandra Cordova Micek (CEO of WTTW/WFMT), and the late Patricia Barretto of the Harris Theater.

“What these women have in common is a clarity of vision, greatness of spirit, and the ability to drill down within minutes to the problem at hand, while making everyone in the room feel included in the solution moving forward.”

“Philanthropy for Liza is an ‘all in’ thing,” shares Hartog-Levin. She gives her energy, passion, intelligence, and resources. And her insights into what a nonprofit needs are always impressive. She is also an unusually generous friend and is lavish with her appreciation, time, and encouragement.”

A career consultant once recommended that Yntema not to be so “all in” and to instead focus solely on one issue, advice Yntema calls “well-meaning but 100 percent wrong” given that “life is not always either linear nor specialized.”

At no time is that clearer than today, which is something Yntema has already been thinking through.

“We are living in a new world and if your philanthropy doesn’t shift to acknowledge that, then you aren’t spending your money well,” she says. “It’s a serious moral decision about what is most necessary now. Art is essential to human life, but so is having enough to eat.”

Ultimately, Yntema leaves us with these words to live by, “Simple kindness is a radical and important act.”

For more information about the Dance Data Project, visit dancedataproject.com.