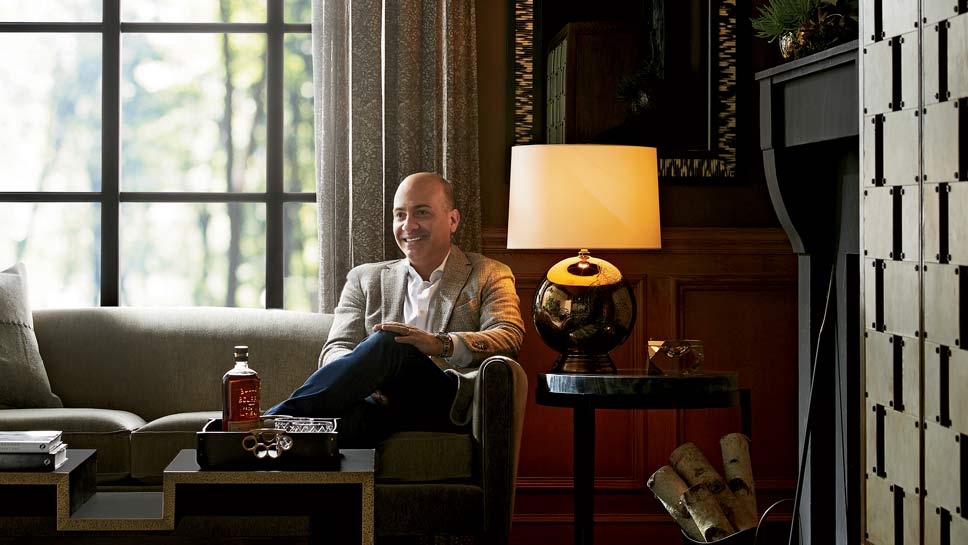 In 2019, celebrated Lake Forest-based interior designer Frank Ponterio launched a collection for the legendary textile purveyor Clarence House—it followed past successful product design collaborations with brands like Arteriors on furniture, lighting, and accessories; Lee Jofa on upholstery; and Charleston-based Avrett on handcrafted furniture and fixtures. These lines are now available to the trade in more than 100 countries.

Growing up, Ponterio spent summers at his family’s farm in southern Italy, and it was during this time—along with the weeklong jaunts his family would take to locales like Rome, Venice, or Milan—that Ponterio developed an appreciation for artistry and craftsmanship.

“I certainly didn’t know how this would shape my perspective at the time,” he says. “when designing the new collection for Clarence House I shared family photos, travel images, and other inspiration when presenting my initial ideas. Images like the underside of a timber and clay-tiled roof became a plaid; cobblestone streets became paisleys; and images of mushrooms growing on the farm all eventually became part of my designs.” 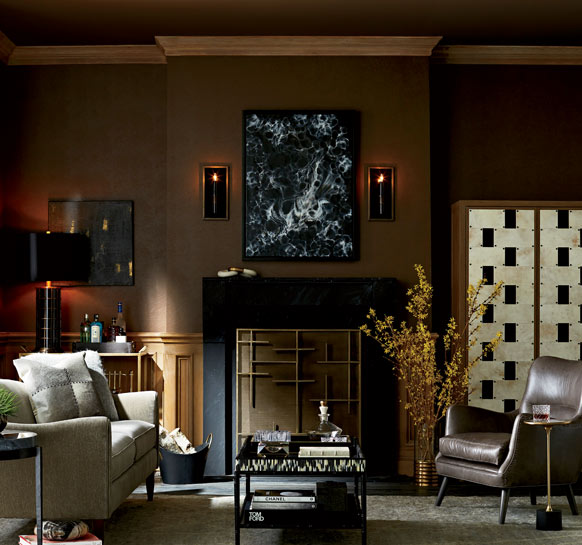 Founded in 1994 when Ponterio was just 23 years old, his namesake firm is now full-service with expertise in everything from interior architecture and historic preservation to interior design and product design. The mission? To create unique environments that are a physical embodiment of the life his clients want to live.

“I was young and making nothing working for other people so figured why not be broke working for myself,” says Ponterio. “I took a chance and opened a small office in Market Square. Fast forward 25 years, and we now have the office in Lake Forest, a 4,000-square-foot space in River North with 14 team members; we opened in Nashville last year, and we are opening later this year in Naples.” 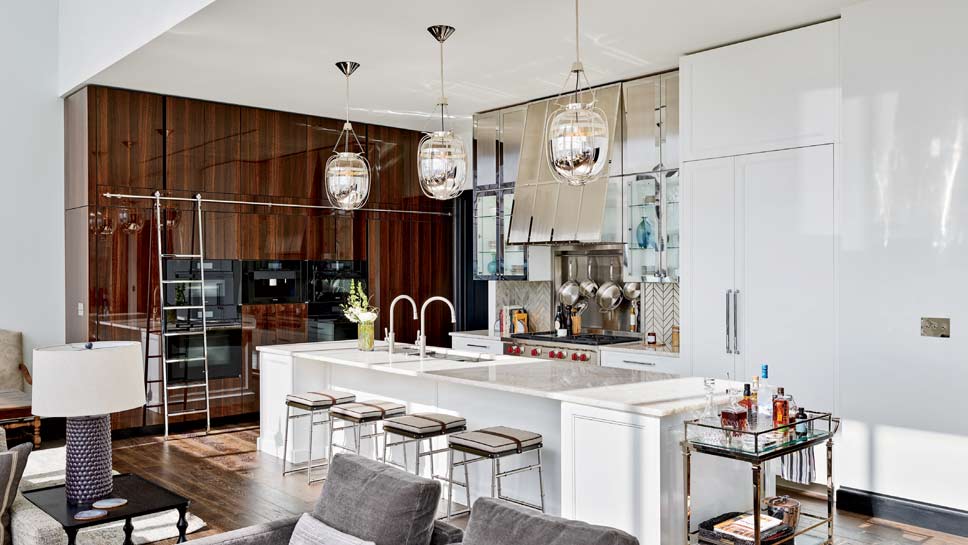 Ponterio is a longtime supporter of the Lake Forest Showhouse & Gardens, benefitting the Infant Welfare Society of Chicago,  and in his first year designing for the project, he asked to work on the living room. “They basically said ‘no chance,’” laughs Ponterio.  He was given a staircase. The next year, the attic, where he created a rooftop terrace with a bar and music to draw attention. Then finally the next year, he was handed the living room. The space was published nationally and helped propel his career.

What stands out about Ponterio’s work is the idea that he doesn’t play within just one aesthetic and easily transitions from projects like an upscale penthouse in Nashville to legacy estates, to boutique hotels, and now on to the interior of private jets, the most recent inspired by an Alfa Romeo GTV. “Aviation is so much fun,” says Ponterio. “The client happens to be a good friend of mine, so every once in a while, I’m lucky enough to be invited to pop on the plane and go somewhere great.” 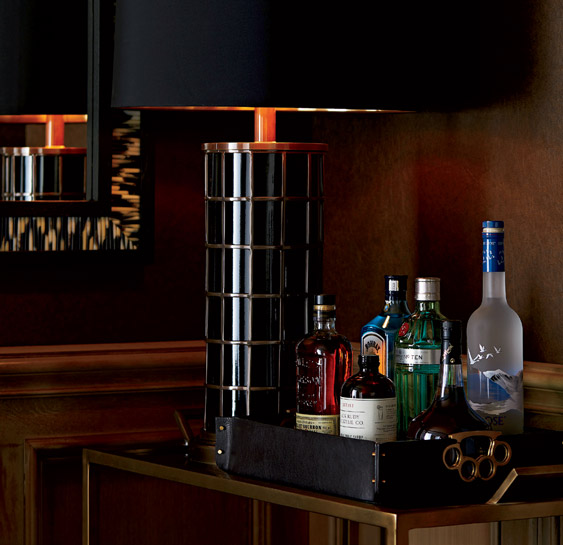 Personally, he, his wife, and daughter, and their beloved dogs live in a David Adler-designed home. It was awarded an historic preservation award from the Lake Forest Preservation Foundation and exemplifies all that Ponterio’s work represents: classic heritage, thoughtful restoration, architectural integrity, incredible details, and an inviting atmosphere.

Speaking to life in an historic home, Ponterio notes “Nobody lives the way they used to; it’s great to have a ballroom, but really the kids just roller skate in it. Preservation is important because these buildings are beautiful and significant, a testament to craftsmanship. Remember, they didn’t have power tools back then. All was done by hand creating a completely bespoke home. Though, while historic preservation is important, good design is even more important.” 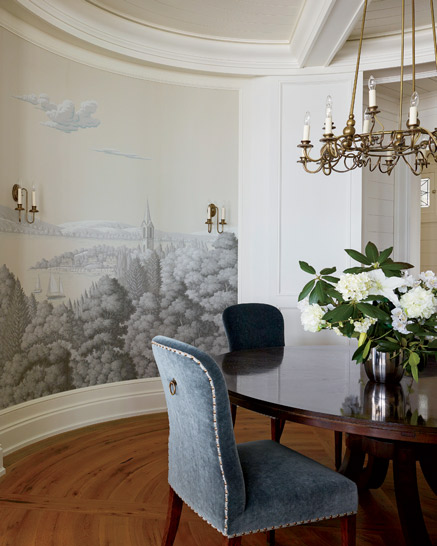 To that end, Ponterio gives his time and expertise as a board member of the Design Leadership Network, a group of more than 300 professionals that seeks to promote growth and best practices in the high-end design world. Additionally, he’s on the board of directors of the Children’s Brittle Bone Foundation, co-chairing the group’s largest fundraiser every year.

“My parents were both immigrants and neither had higher education,” says Ponterio. “I realize how fortunate I am and sometimes can’t believe this is all actually happening. I believe if you can give back, then you should. And thankfully we can.” 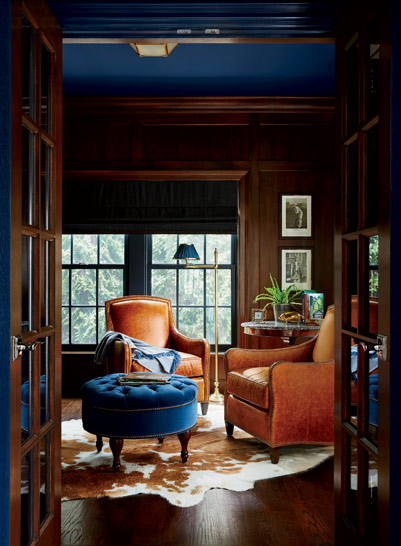 We caught up at Ponterio’s home studio after he’d spent the week traveling with back-to-back meetings to promote the Clarence House collection and visiting clients in multiple locations—we asked how he spends his rare spare time: Ponterio frequents the bar at Deer Path Inn, loves brunch at Guildhall, and has been going to Miramar for 20 years. In the city, he’s a big fan of Le Colonial and the view offered by Gibson’s Italia.

“I’m also a really bad golfer, so I keep thinking my game will improve and we travel … a lot—our favorite is of course Italy where we go at least twice a year,” explains Ponterio. 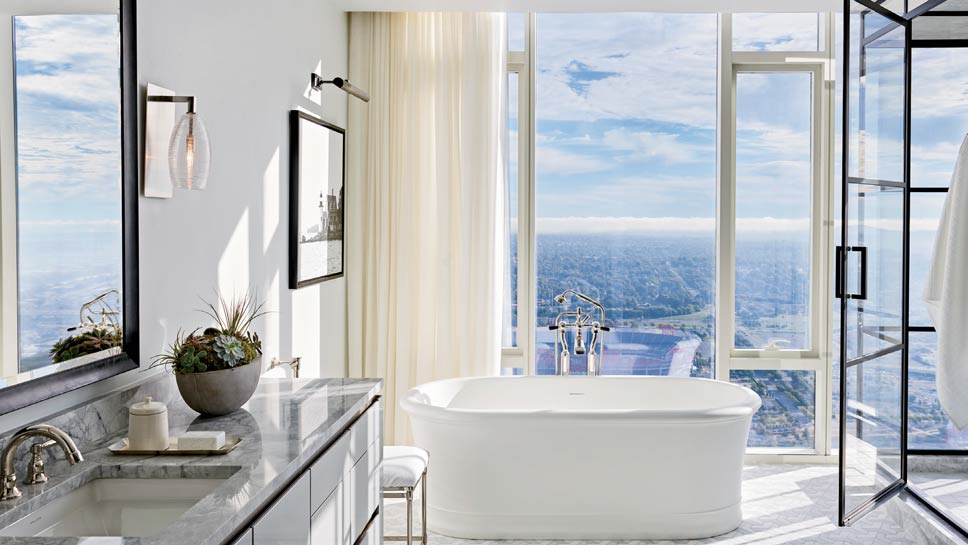 Right now, he’s enjoying mentoring the younger designers in his office and soaking up their excitement, and he is looking forward to escaping Chicago winters in the forthcoming Naples office.

“Just like any designer, I don’t really know what’s next, as you never know when the phone will ring or when you’ll meet someone who wants you to be a part of something great,” he says. “But as I get older, the Chicago winters seem longer, so our expansion into new markets is very exciting. Though, the heavy lifting will always still happen in my hometown, Chicago.”