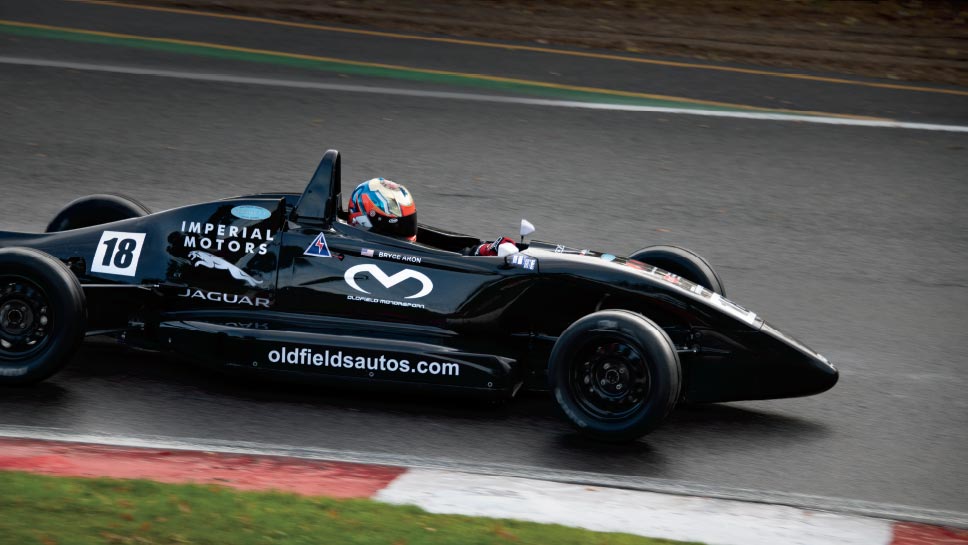 The day Bryce Aron turned 16, he not only got his Illinois Driver’s License, he got his Fédération Internationale de l’Automobile (FIA)-sanctioned professional car racing license.

“It’s true,” smiles Aron, explaining that he had to have both to compete in England’s iconic Formula Ford Festival, where he was the youngest race car driver on the track. One of three drivers chosen to represent America as part of Team USA in the World Cup there, Aron’s participation came at the conclusion of a brilliant first year in professional racing: He placed third in the U.S. National 2019 Pro Formula 1600 series, among a host of other racing wins.

Such a strong first showing earned Aron an invitation to drive with the Cliff Dempsey Racing team in the U.K., where he will compete for the 2020 season. Running from April to October, the U.K. racing year culminates with the Formula Ford Festival and the Walter Hayes Trophy race. Aron’s dream is to be the first American in history to win the Festival’s main event.

Unusual? Yes. But there’s not a lot that’s usual about this fast, and focused teen.

“I’m ultra-competitive,” laughs the New Trier High School sophomore, who maintains a 4.0 grade average, despite the intensity of commitment that racing requires. Racing cars, and mastering everything about them in the push toward faster speeds, and bigger wins, consumes Aron.

“I’ve always loved cars,” he says. “My parents tell me my first sentence was, ‘I see car.’ So even when I was really little, I wanted to find a way to pursue cars as my passion. I was like, ‘But how do I do that?’ Watching car races on TV—Top Gear, Formula One, Indy Car, my four-year-old self thought: ‘Racing! That’s how I’ll do it!’”

Touring the Lamborghini headquarters with his father during a family vacation in Italy when he was eight years old made a big impression on Aron, who spent the tour asking questions about racing and learned about go-karts—the entry ramp to professional car racing.

“After that visit, I went from, ‘I want to race,’ to ‘I have to race,’” he says. “From then on, it was just me asking, ‘When can I do go-karts? When can I start in go-karts?’ which probably annoyed the heck out of my mom and dad.”

Despite initial reservations, Aron’s parents Alyson and Jordan did research and agreed to take Aron to a recreational indoor go-kart track to try it out. 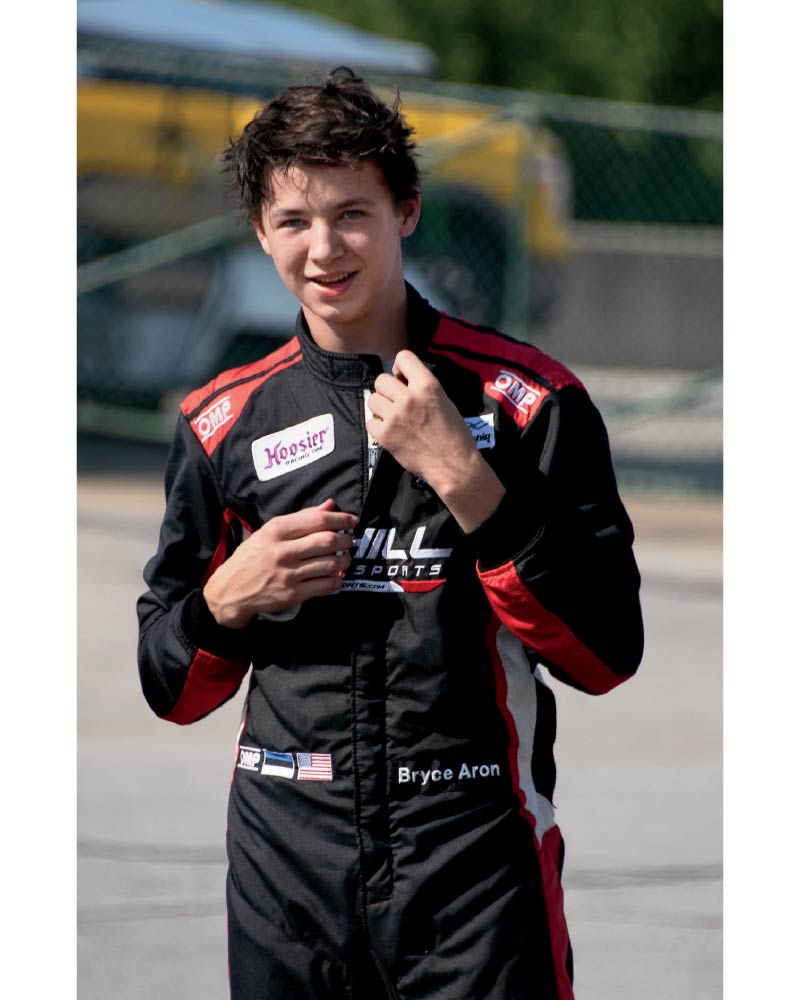 Aron’s ease with speed and maneuverability, and his unrelenting determination to race, eventually led to participation in competitive go-kart racing on an outdoor track when he was ten. That first go-kart race remains one of Aron’s most memorable.

Aron placed fifth in the race, and with each subsequent competition, has learned and improved, advancing from go-karts, to the Formula 1600 cars he races now. Hints of the racing life peek out at the edges of the Aron’s home in Winnetka: Go-karting trophies in one corner stand almost four-feet tall. A half-dozen racing coveralls hang in the coatroom, with two helmets on the shelf. And Aron’s first go-kart—now a battered relic—hangs quietly in the garage. But Aron’s room is the motherlode. Shelves wink and sparkle, lined with trophies, medals, racing swag, and empty champagne bottles (traditionally handed out to winners on the podium and filled with liquid that Aron has been too young to actually drink.) But despite the trove of riches, Aron keeps a quiet profile at school, doesn’t talk much about racing with his friends and maintains the disciplines required to fulfill his dream of one day making it to the top of motor sports.

“Friends know I race, but most do not really understand it,” he says. “They hear racing and think NASCAR, which is on an oval track, and Ricky Bobby. Open wheel, which is what I race with the Formula 1600/Formula Ford cars, is different. These are open cockpit, single-seater cars mostly driven on road courses with right, left, and hairpin curves.”

A great deal of physical strength, and endurance, plus intense mental focus, and strategy are required to succeed. To achieve this, Aron works out daily, with a focus on building shoulder, arm, and abdominal strength. He also analyzes film footage from races—his own, as well as races won by motor sport stars such as Ayrton Senna and Lewis Hamilton.

“People may think of racing as a one-person thing,” says Aron, “Just the driver behind the wheel of a very fast car. But it really is a team effort. I may be in the car by myself, but it’s the team—from the driver coach, to the data engineer, to the engineer, to the mechanics, that leads to success.”

Aron explains that each Formula 1600 car he races is equipped both with an onboard camera, and a data-logging unit that captures the minutiae of everything he does on the track, from throttle, braking, and shifting inputs, to steering. Studying the video footage and data with his coaches and engineers is what helps Aron find ways to correct movements and strategize toward faster times. It’s something he studies every day.

“Am I a little bit too wide in turn three? Or too narrow? Am I taking a late apex? Early apex? Am I on throttle too early? Am I braking too early, or if I’m braking too late—am I overcharging the corner? Studying all of this allows me to break things down to a couple of feet, or even inches.
Because in a race, if I am breaking a foot later than another racer, that could add 1/100th of a second to my time. And in this setting, where races can be won by a couple thousandths of a second, that can mean the difference between a win or a loss.”

Because Aron is a perfectionist, his biggest challenge has been not beating himself up mentally if he makes even the slightest mistake on the track. “If I get down on myself and get stuck there, it affects me in the car. It’s hard to bounce back, but you have to stay out of your head. Because if you get frustrated or angry, it shows immediately in your race performance. If I lock a brake and spin, for example, or get too sideways and lose time on a qualifying lap, I have to brush it out of my mind right away. I can’t say, ‘Dang it! I screwed up!’ I have to immediately say, ‘Okay I made a mistake, now move on!’ And put it to the back of my mind.”

Aron’s mantra is, You either win or if you come in second, you are the first person to lose. “Ultimately? I want to make it to the top of motor sports. I want to be paid to do my dream. So, I’m aiming to make it to Indy Car, or to the absolute pinnacle which would be Formula 1,” he explains.