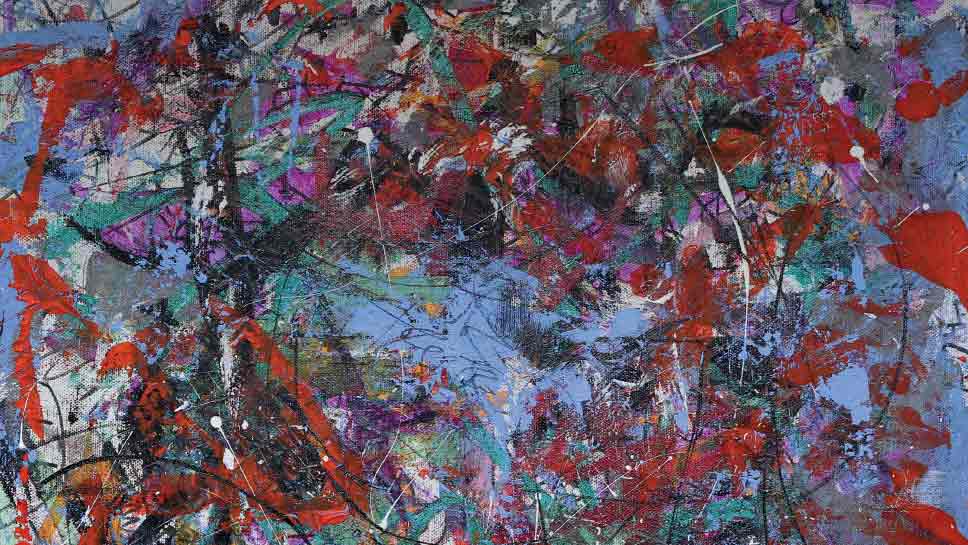 In November 2015, artist Michael Ball flew to Chicago from San Francisco to help his mentor ISz with a gallery exhibition in their joint hometown of Peoria, Illinois. The Friday before the Saturday opening, artist Wendy Thornycroft returned from two weeks in Japan determined to attend the show in support of her friend; that is, ISz.

The rest, as they say, is history. Thornycroft and Ball spent the night talking, then started a texting relationship that eventually graduated to lengthy phone conversations and one year later, in the fall of 2016, the couple married. 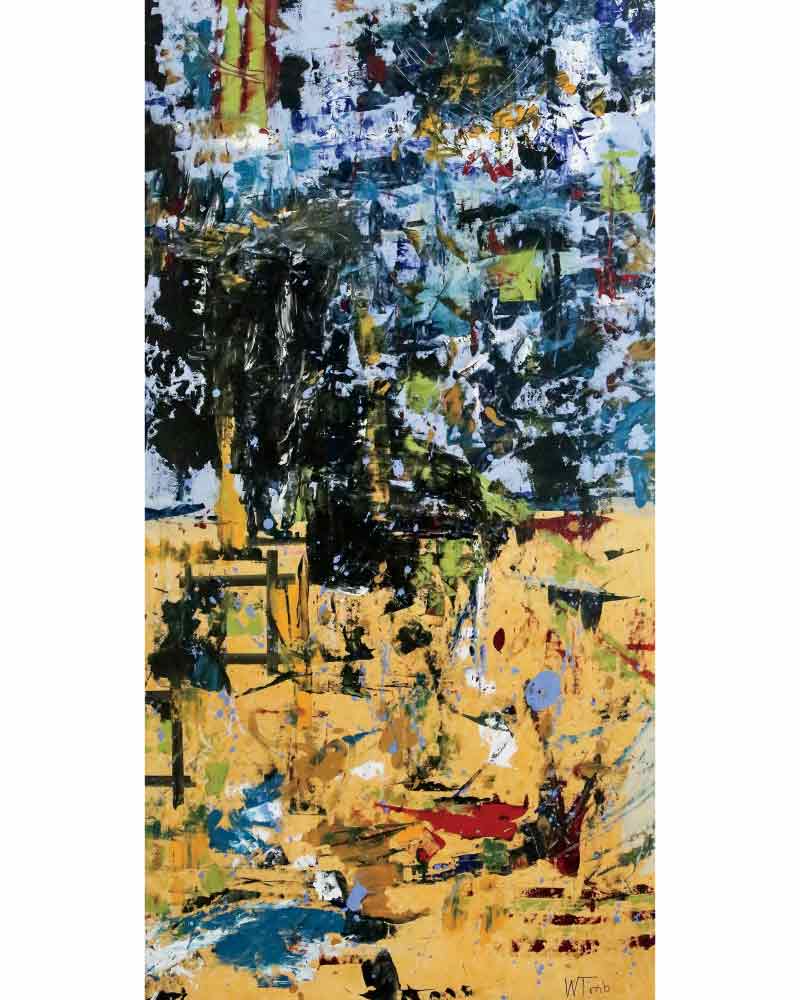 “We’re like George and Lennie,” says Ball. “We’re inseparable and are happy simply being around each other. We enjoy each other’s presence and are very likeminded.”

That translates to their work. After sharing a studio for a short time, the two decided to collaborate and took alternate turns at the canvas until they soon started working on the same piece at the same time in a style all their own, dubbed “fermented modernism.”

“We’re big fans of abstract expressionists from the ‘40s, ‘50s and ‘60s,” says Ball. “We take that older style and ferment, or change, it to be something a little more current and visually new. The style of our work tends toward what Wendy did before we met, which is much more ethereal.” 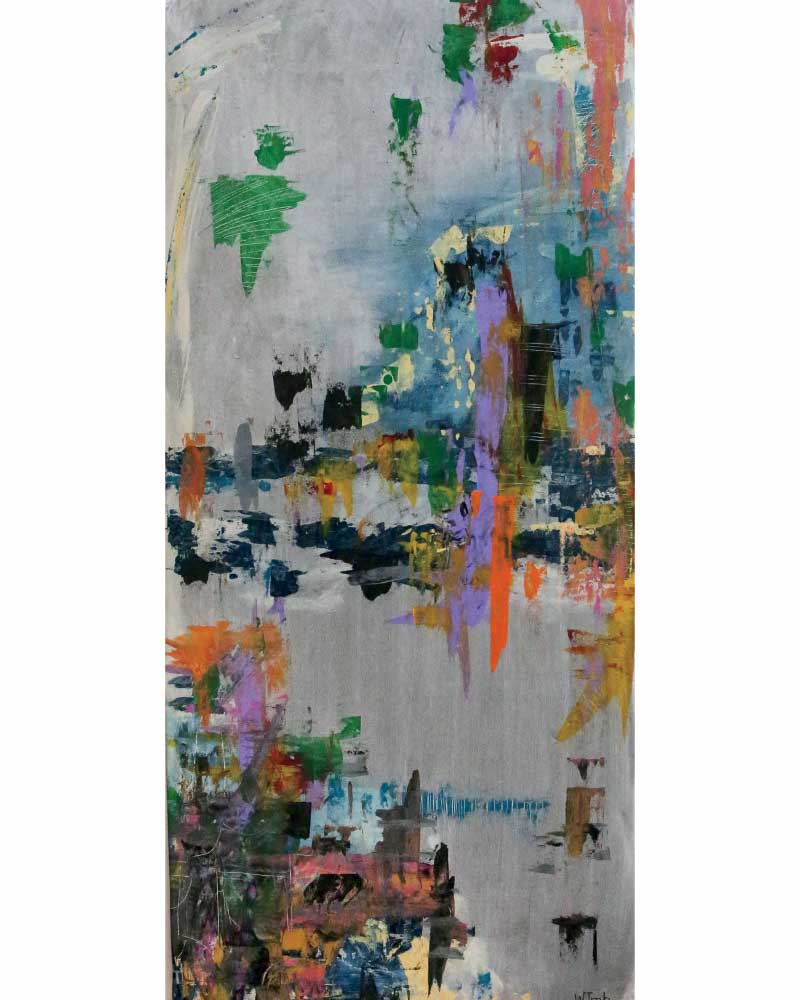 As a high school student at New Trier in Winnetka, Thornycroft says she was “all about art” and would not have graduated without the support of art department chair Lynn Duenow. She later studied at the Minneapolis College of Art & Design and at the San Francisco Art Institute, spending most of her time on sculpture. She’s been said to inherit the American tradition of abstract expressionists but with a personality and style all her own.

For Ball, guidance came from his family and, specifically, his grandfather. Self-taught, Ball started drawing as a little kid and grew up making paintings for his high school friends. In the 1970s, he turned from realism to abstraction, and his style emerged, one punctuated by linear images with color, pattern, and texture between the lines. He credits ISz as his biggest learning influence. 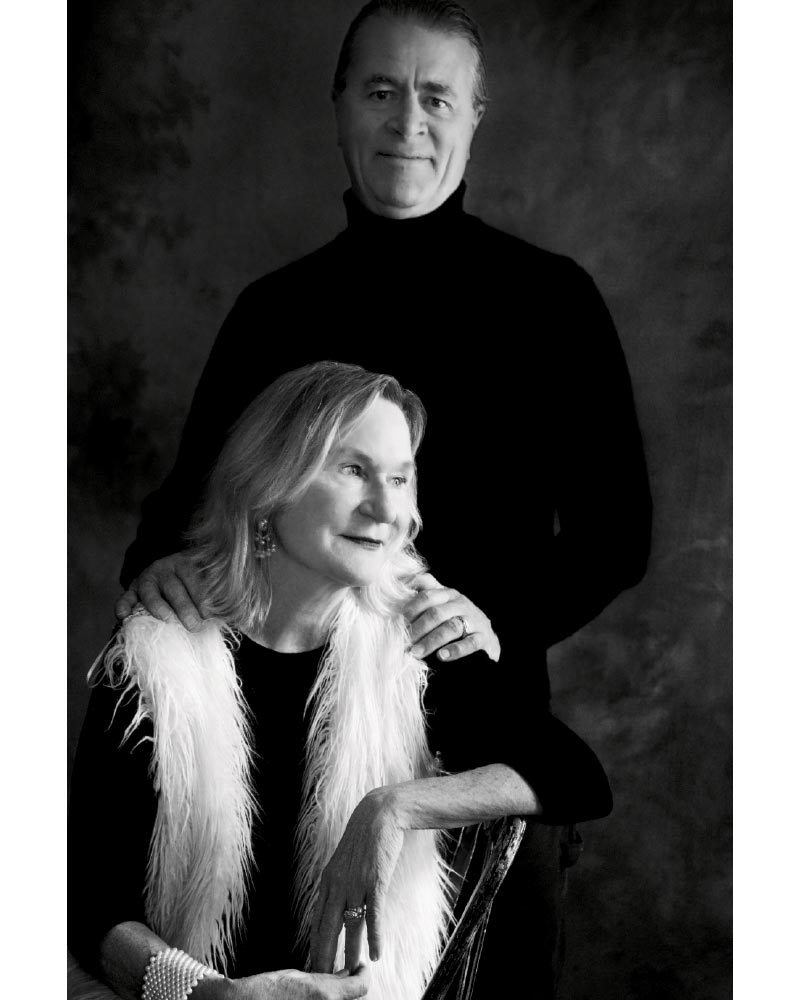 With both Ball and Thornycroft’s work, they’re said to stimulate thought and make the observer live a great variety of different experiences.

“I want the viewer to lose their mind, forget about where they are and let their eyes take them to another place,” says Ball. Adds Thornycroft, “I want people to look at something and hopefully be as moved as I am when I’m working on it. I like to see people have that enthusiasm.”

Thornycroft says working together has helped both of them push past their comfort zones, which she says is always a good thing. “The struggle is anytime Wendy doesn’t do what I tell her to do,” laughs Ball.

Perhaps because of their love, the two say emotion plays a large role in their work, which they describe as passionate. When looking for inspiration, Thornycroft says she finds ideas in traveling, new cultures, and nature. She and Ball went to Bilbao, Spain two years ago to experience the Guggenheim Museum, and Thornycroft even dedicated a series to the Iguazú Falls in Brazil.

“It’s drugs for me,” jokes Ball. “Really, though, it’s very spontaneous. The inspiration is just being alive and still on two feet. The planet, the universe, we’re all part of the same cosmic dust, and my work is a reflection of that. Spiritual, right?”

Thornycroft teases him: “I’m in tears over here.”

Thornycroft counts American painter Joan Mitchell as a favorite artist, joking that it’s because her work is “like mine.” Ball’s favorites include ISz, of course; along with Pablo Picasso, a favorite of Thornycroft’s, too; Jackson Pollock; Mark Rothko; and German painter Albrecht Dürer.

Art permeates everything the couple does. For 20 plus years, Thornycroft has been a member of the North Shore affiliate of the Museum of Contemporary Art and, this April, she and Ball will open their home for the organization’s Board Walk.

“We live in a dollhouse,” says Ball. “Our furniture stylings are eclectic, and we have a whole lot of art on the walls. Our home is small but esoteric.”

In their free time, the pair like to cook and garden—they have a four-foot cast concrete reproduction of the Greek sculpture “Venus de Milo” in their front yard—and visit museums, like Northwestern University’s Block Museum of Art in Evanston.

“I struggled to find my own voice, and it took the better part of the ‘70s and ‘80s before it finally popped for me,” says Ball. “Now this is all ours and nobody else’s, which is pretty groovy.”