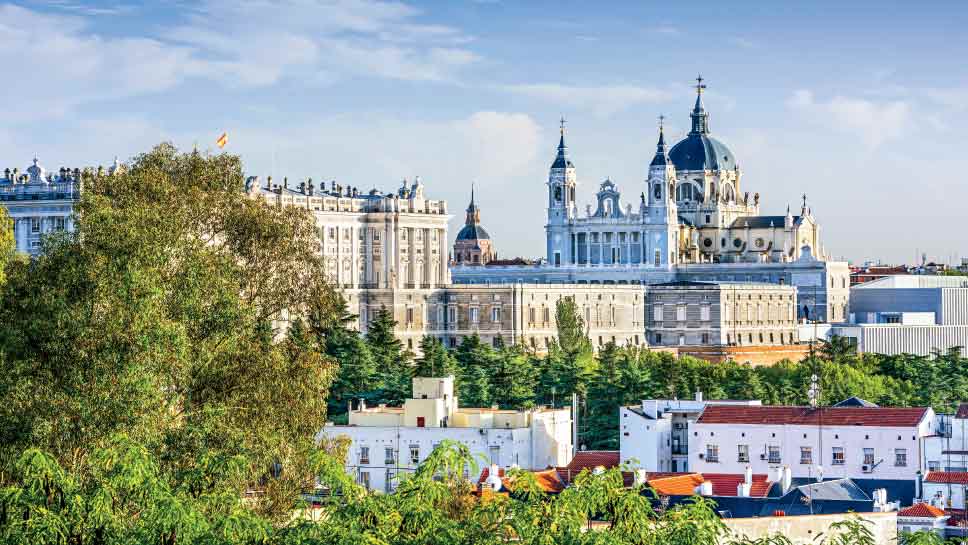 Venture on a journey from Spain’s historic capital city to a beachy Andalusian gem. View of Cathedral la Almudena and the Royal Palace.

Madrid is full of artistic attractions, which mirror the different styles that have left their imprint on the city over the centuries. Beautiful architecture, winding narrow streets, and cultural treasures make it easy to fall in love with this romantic city, and the ability to easily navigate its clean, safe streets is a real plus for visitors. 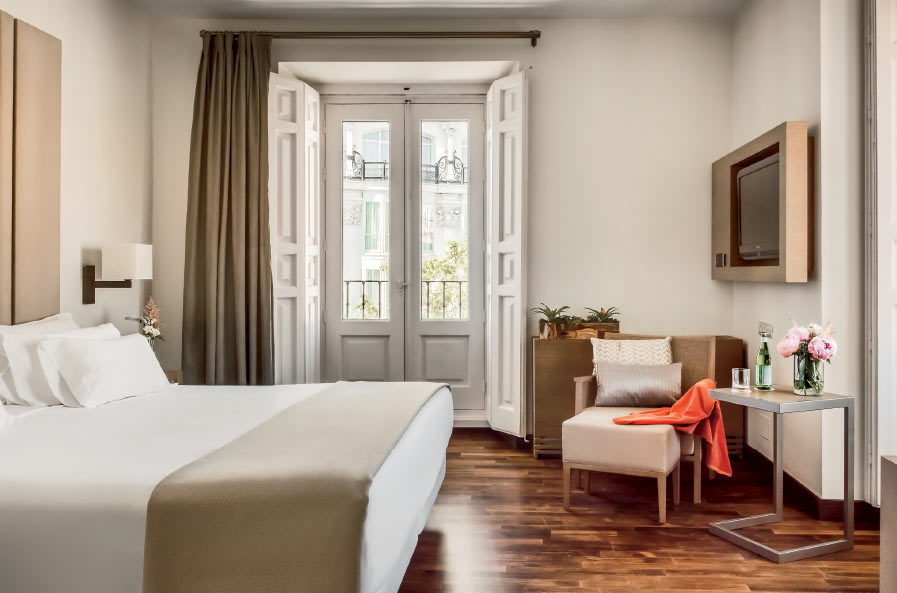 Stay at the five-star luxury NH Collection Palacio de Tepa, which is located in the heart of Madrid’s “Las Letras” district. Housed in a 19th-century palace designed by Juan de Villanueva, the architect of the Prado Museum and Plaza Mayor, Madrid’s main square, the hotel combines a rich history with modern luxury. From the meticulously preserved brick façade to the 16th-century artifacts displayed in the lobby, the hotel transports you back in time. Open the door to your room, however, and you step into the modern era where exposed beams, vaulted ceilings, contemporary furnishings, hi-tech access, and gorgeous views abound. Suites offer a loft sleeping area that my daughter adored. The hotel is a five-minute walk to Plaza Mayor, a 15-minute walk to the Royal Palace, and a 15-minute walk to the Golden Triangle of Art—the nexus of the Prado, Reina Sofia, and Thyssen-Bornemisza museums. 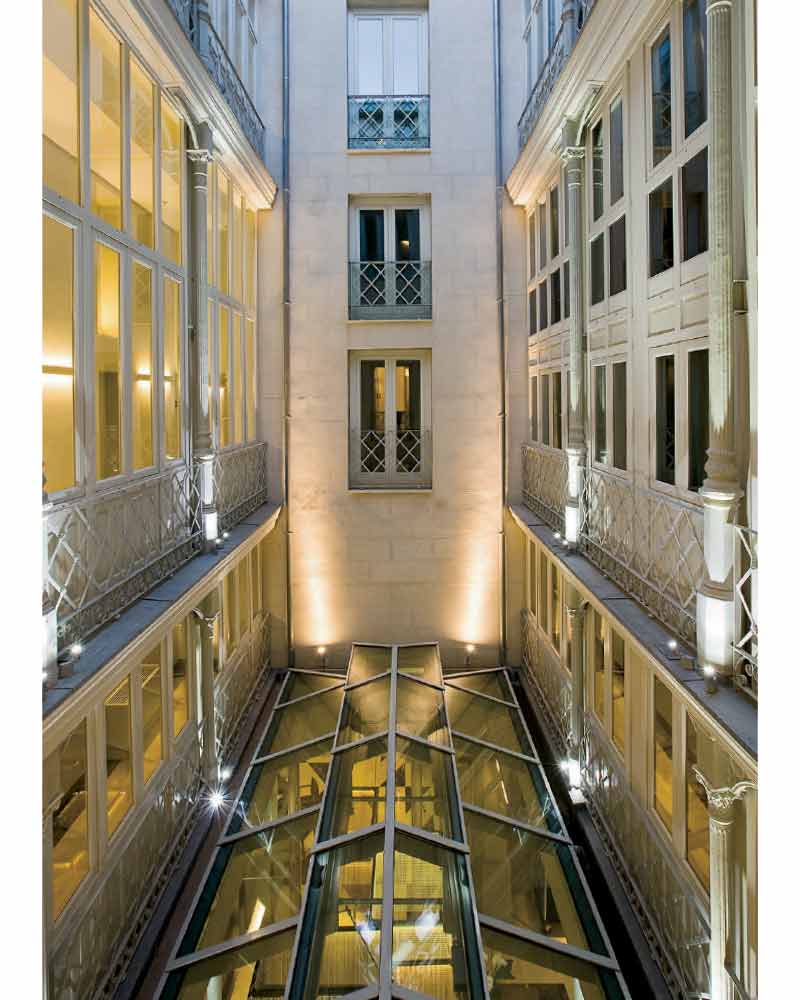 If you have only one or two days in Madrid, start with the museums. The Prado Museum should top your list, as its vast collection lands it a spot as one of the world’s top museums. I was giddy with anticipation as we approached this treasure trove of artwork. Like a kid in a candy store, I hungrily progressed from Sala to Sala to view the work of masters including Velazquez, Goya, Caravaggio, and Reubens. Next, visit Reina Sofía Museum, home to Picasso’s “Guernica.” To complete the trifecta, visit the Thyssen-Bornemisza Museum where you will find a collection of international paintings that perfectly complement the Prado’s old masters and Reina Sofia’s modern and contemporary works. 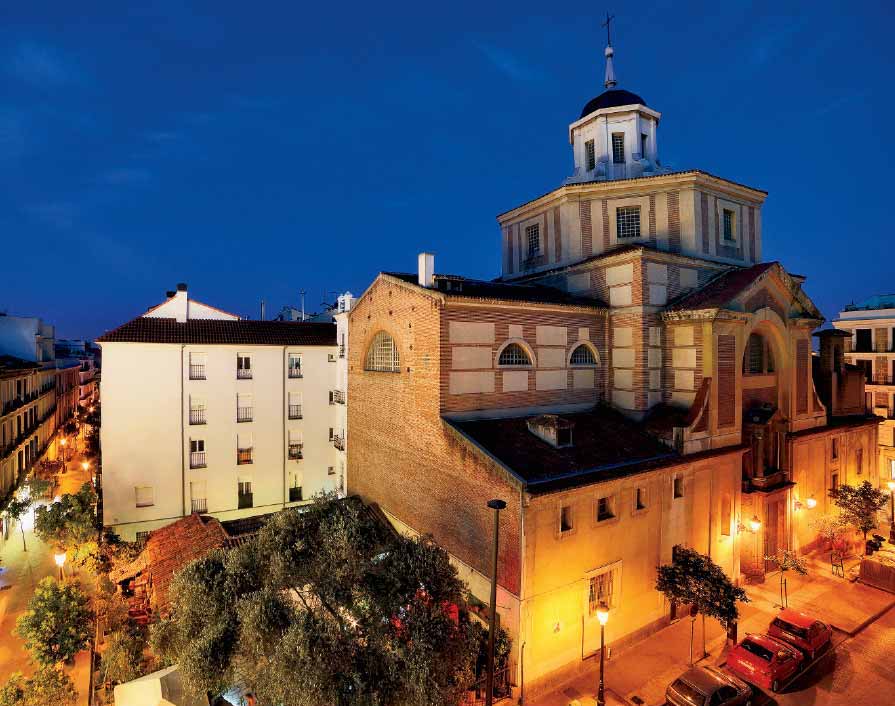 Fully sated with art, take a rest near the Crystal Palace in the Parque de El Retiro and contemplate your visual feast. Once rested, set off to visit the balcony-lined Plaza Mayor to sit among the locals for a coffee and grab a bite to eat at the glass-encased San Mercado market. Just a stone’s throw away is the must-see Royal Palace. Take on the persona of a monarch as you wander through the imperial hallways commissioned in 1738 by the first Bourbon King of Spain, Philip V, and completed nearly thirty years later. The Royal Palace continues as the official residence of their Majesties King Felipe VI and Queen Letizia of Spain.

Next door is the mammoth Cathedral la Almudena and just to the north is the Temple of Debod—an Egyptian temple dating back to the 2nd century that is exquisitely lit in the evening hours. Use all five senses to absorb what the city offers—from the laughter spilling out of open cafe doors to the lively, cartoonish acts in the squares—as you stroll through Madrid’s enchanting streets and squares before returning to the hotel for dinner. 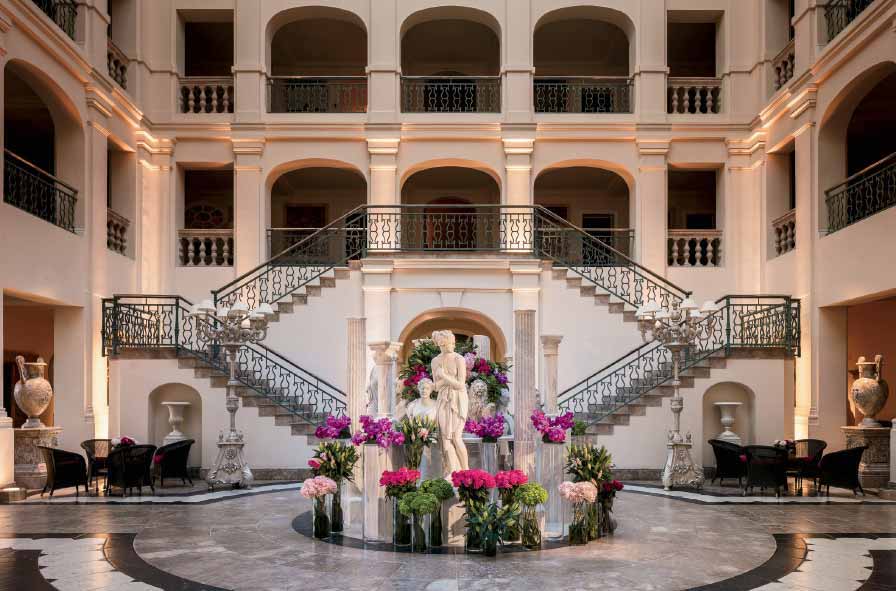 Arrive via bullet train (two and a half hours from Madrid) to Malaga where a one-hour scenic trek west, delivers you to the gem of Andalusia—Marbella and its Anantara Villa Padierna Palace Benahavis Marbella Resort. Entering the glass doors of the blush-colored, Tuscan-style hotel, you find yourself in a lavish lobby and glass-ceilinged courtyard. Stunning grounds, glorious restaurants, three remarkable golf courses, a garden pool, and a heavenly spa complement the hotel’s remarkable art collection—a passion of the husband and wife team who built the Villa in 2003. Michelle Obama and her daughter Sasha enjoyed all of the Villa’s offerings on their visit in 2010 staying in a villa now dubbed the “Obama Villa,” which is the only whitewashed residence (aka “White House”) on the property. 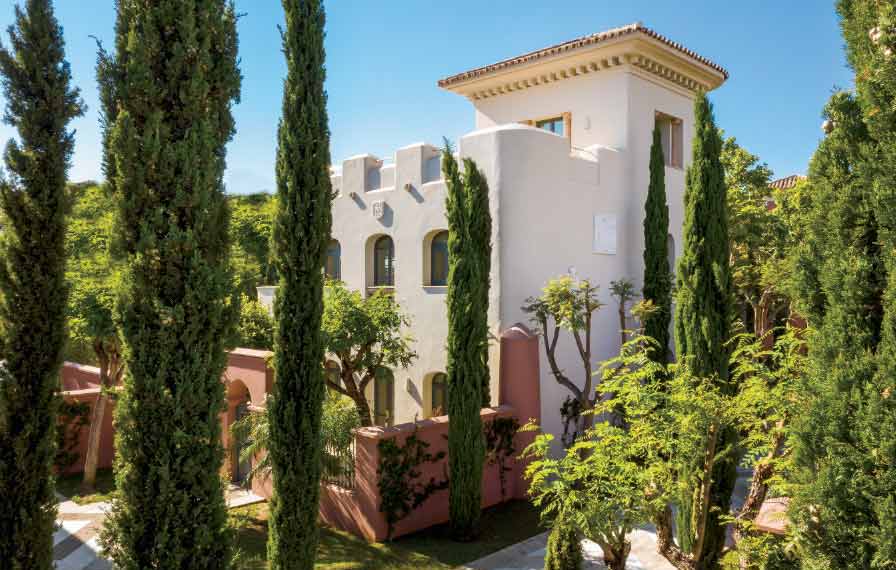 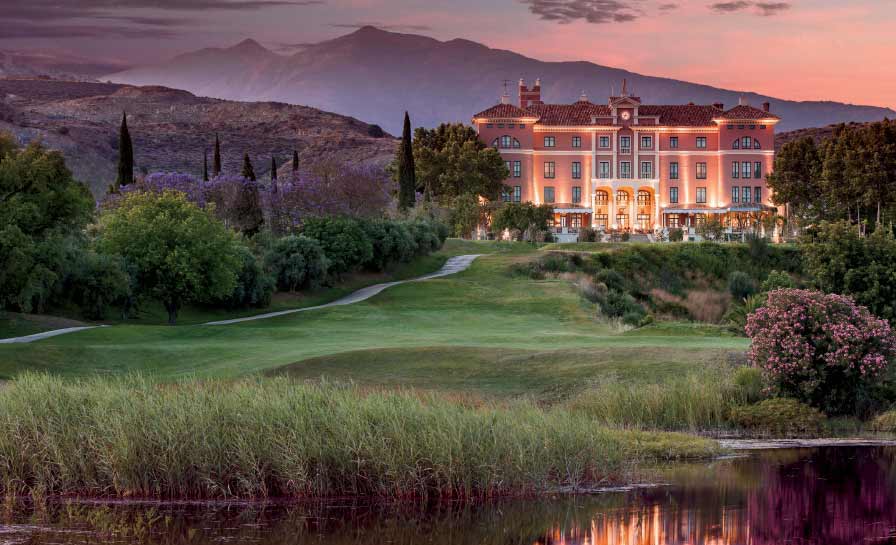 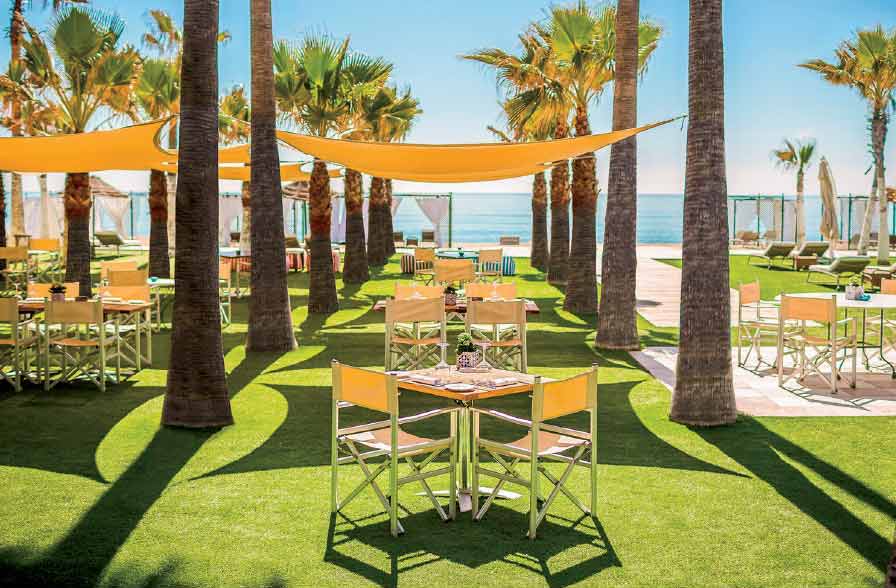 If you have time, take a day trip to visit Ronda—one of the oldest towns in Spain. The one-hour drive takes you along cliff-hugging roads offering views of the Mediterranean Sea, the Strait of Gibraltar, and the African coast. Upon arrival, winding, narrow streets deliver you into the darling city center where whitewashed houses and orange trees adorn the squares. Be sure to see Ronda’s most dramatic element—El Tajo—a deep rocky chasm that splits the town in two. Follow in the path of the Romans, as you cross from one side to the other along an ancient bridge. 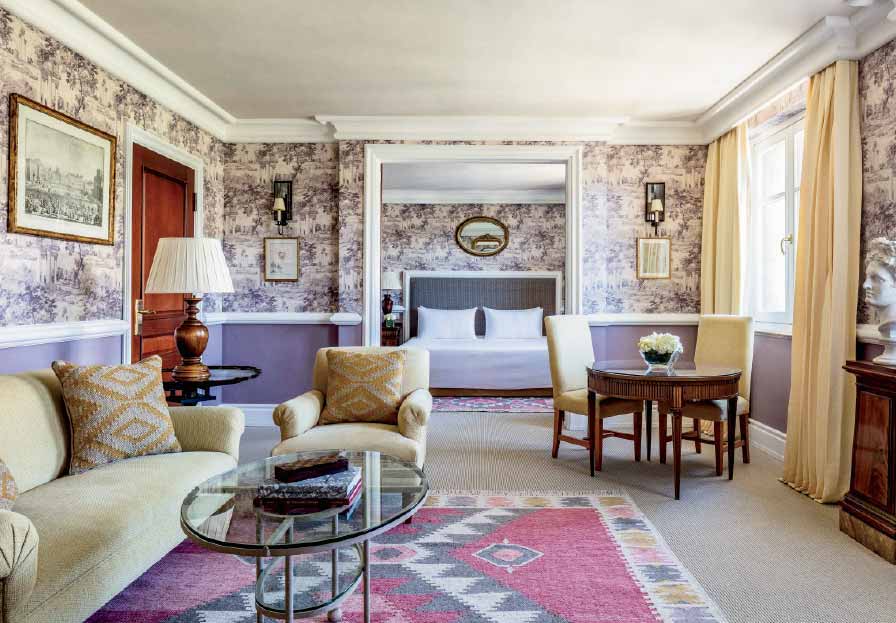 Be sure to stop for a tour at LA ORGANIC, known for its olive oil—internationally referred to as liquid gold. Taste various oils in their modern and pristine tasting room. Founded just over a decade ago, the company has become an “organic beauty pioneer,” promoting the belief that you are what you eat and that the nutrition of food is a result of the soil it came from. Art dots the landscape as LA ORGANIC’s design was developed by French designer, Philippe Starck, one of the world’s most well-known product designers.

One evening be sure to enjoy dinner at La Loggia. In the formal yet cozy dining room you’ll dine on artistically presented seafood and meat dishes surrounded by trump l’oeil garden scenes with a view of vine-covered pergolas.

Every great trip must come to an end. However, Spain leaves visitors with a desire to return again and again. Perhaps to visit another part of the country’s diverse terrain or simply to return to Madrid and Marbella to recreate treasured memories.