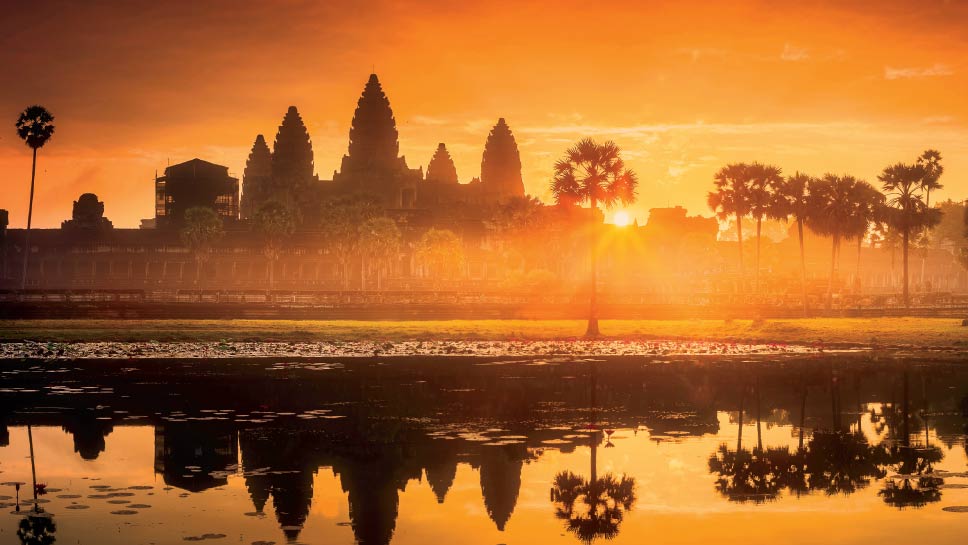 One adjective comes to mind with the mention of Southeast Asia—magical. Perhaps because there is something incredibly special about this part of the world. Its exquisite natural beauty, the gentleness of its residents, ancient temples, and spirituality converge to create an experience that alters something in visitors. 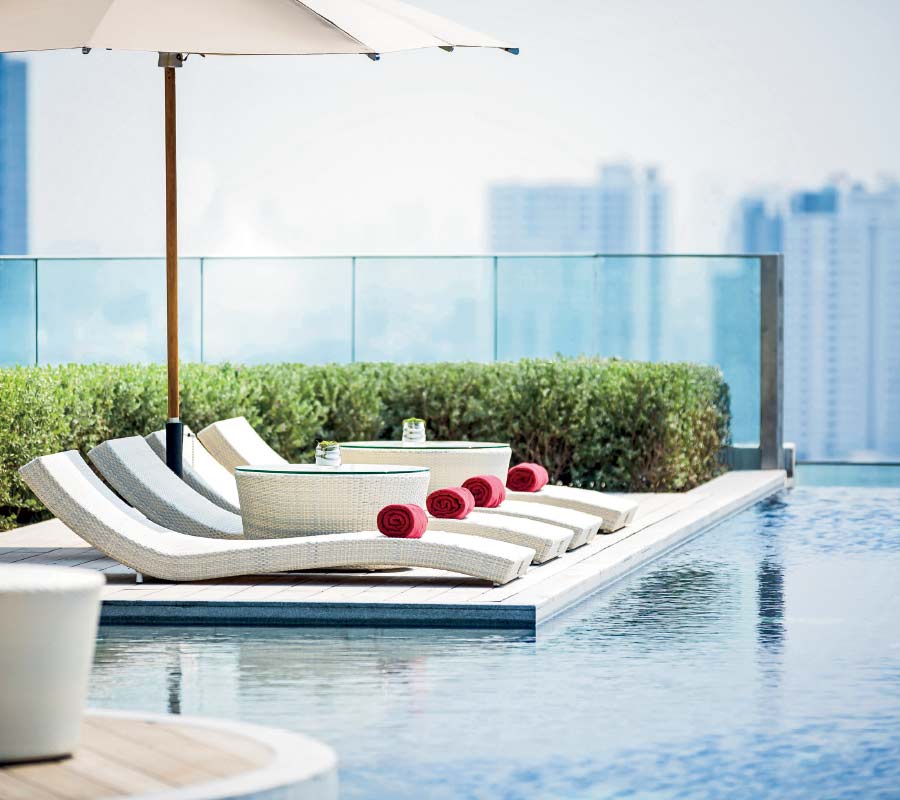 I recently ventured through this area with a group of intrepid companions hailing from all corners of the globe. We dubbed ourselves the “Avani Five”—a reference to the Avani properties we visited in each country. Our extraordinary adventure carried us through Thailand, Laos (pronounced “Lao”), and Cambodia. Although ours was a merry band of travelers, our itinerary is well suited for the lone sightseer seeking introspection, a young couple on a romantic quest, a family hoping to broaden its cultural horizons, or a seasoned pair seeking a history-steeped thrill. 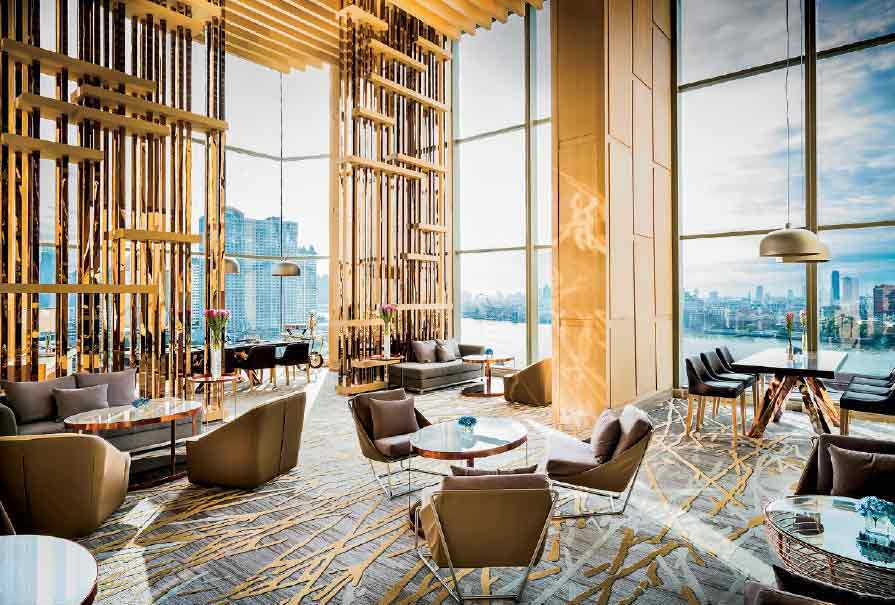 After a 15 hour nonstop flight from Chicago to Hong Kong and a quick jaunt to Bangkok on Cathay Pacific—my new favorite luxury airline—I met my driver who darted through the hustle and bustle of this city of 8 million to arrive at the Avani+ Riverside Bangkok Hotel. Rising above the banks of the lively Chao Phraya River, the hotel boasts a smooth blend of contemporary style and modern warmth while providing a bird’s eye view of the sprawling city. Any hints of jet lag were dispelled by a delicious breakfast of pressed vegetable juices, Singaporean-style noodles, and jackfruit and pitaya—two succulent local fruits. 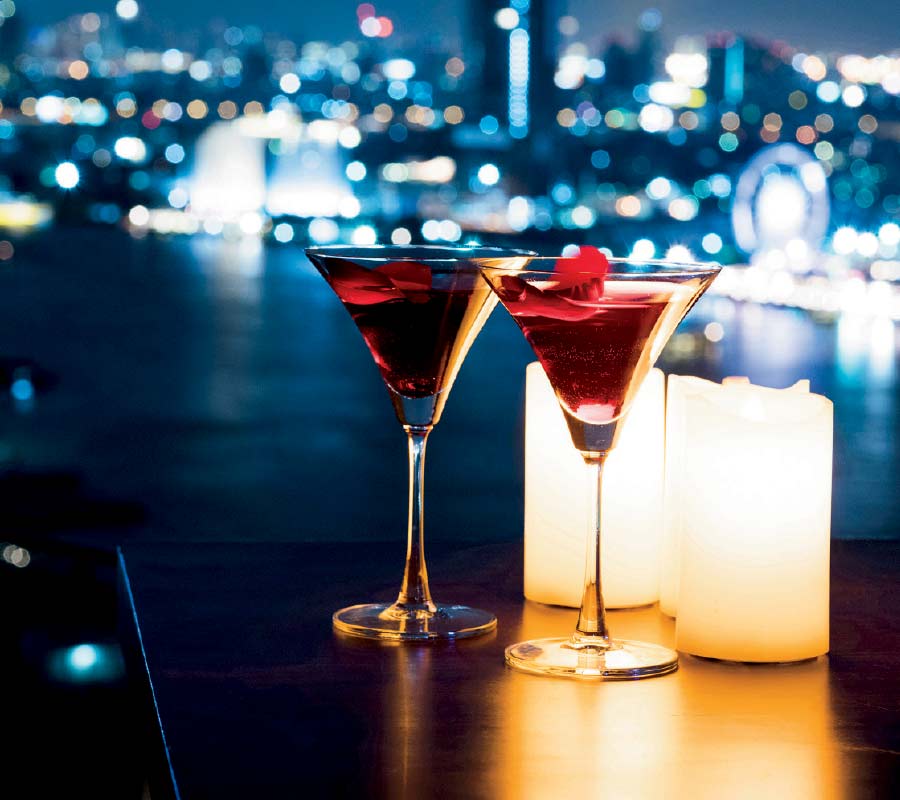 I always say the way to really see a city is with a local. So, in step with our resident guide, we set off to explore ornate ancient temples and traditional flower markets, which vividly contrasted with the hip vintage boutiques and ultra-cool coffee shops in the design district. First-time visitors to Bangkok should certainly explore The Grand Palace complex, home of the fabled Emerald Buddha. Arrive early to beat the crowds and allow ample time to appreciate the acres of gold—you will not be disappointed. 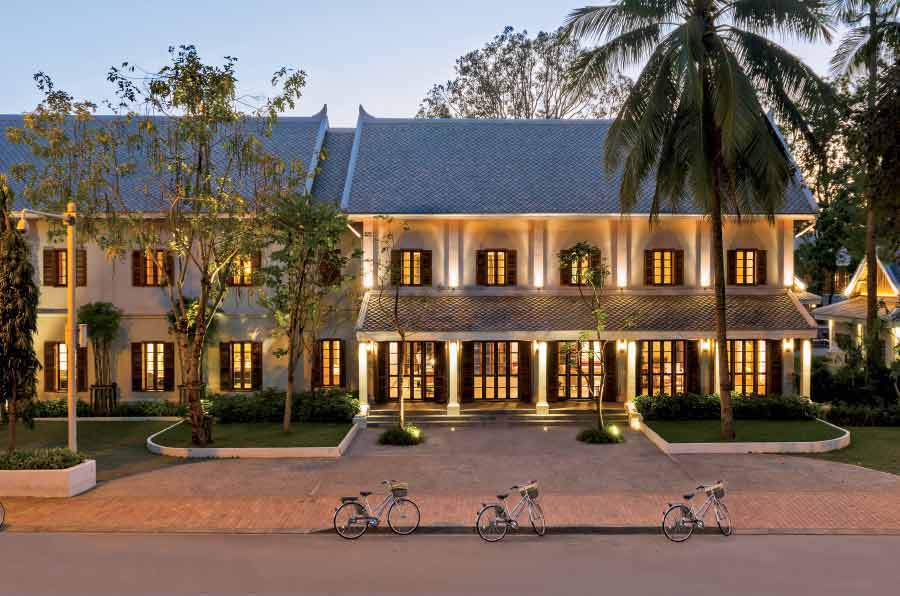 We ended our evenings at the hotel’s rooftop restaurant and bar—the aptly named SEEN as it is the place to be seen in Bangkok. Bespoke cocktails and aromatic cuisine overlooking the brightly lit city affirm the classic 80s lyric, “one night in Bangkok and the world’s your oyster.”

A short flight from Bangkok delivers you to Luang Prabang, Laos’ capital. Located in the north-central part of the country, it’s surrounded by mountains on a narrow peninsula at the intersection of the Nam Khan and Mekong rivers. The Avani+ Luang Prabang Hotel rests in the heart of the city while seemingly existing in a world of its own. Built within a UNESCO World Heritage Site, the intimate 53-room hotel boasts a French neo-classical design erected in the style of the city’s grand villas. 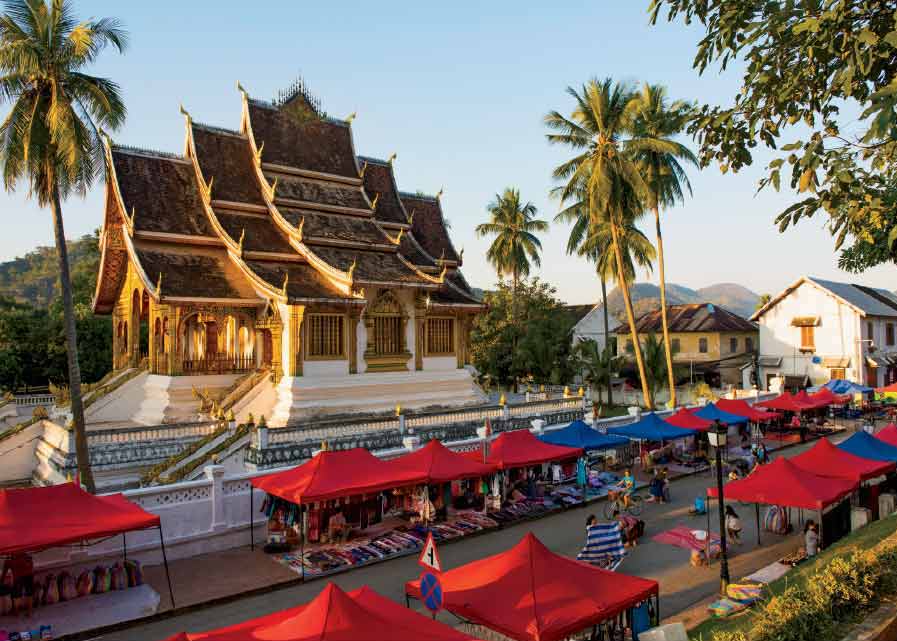 The suites encircle a sparkling black-bottom pool surrounded by flowering trees. During my daily swim, fragrant white flowers often floated down from above. Feeling every bit like Esther Williams, I tucked the fragrant blossoms behind my ear as I glided across the water. Just to the south of the pool—and contributing to the mystique of the surrounding courtyard—stands an enormous ancient tree that, according to local lore, contains spiritual inhabitants. Evidence of the locals’ belief in the tale’s veracity are the remnants of candles surrounding the tree’s trunk, apparently lit to please said residents. 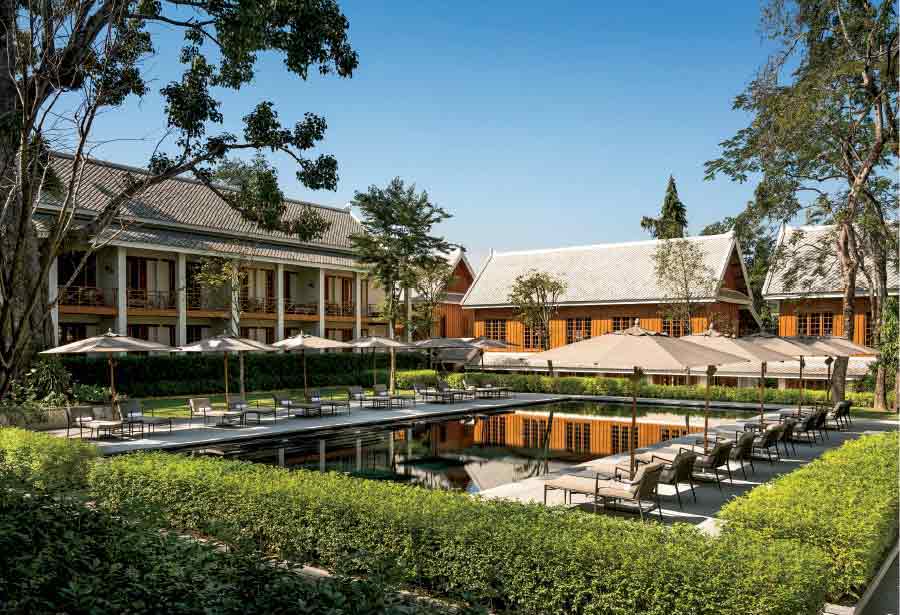 When hunger calls, the hotel’s Main Street Bar and Grill offers a fusion of French colonial and authentic Lao cuisine. After savoring divine desserts like mango sticky rice and chocolate volcano cake, we often ventured out to the night markets. With our wallets full and our bellies fuller, we strolled the stalls in search of gifts for those we had left behind. 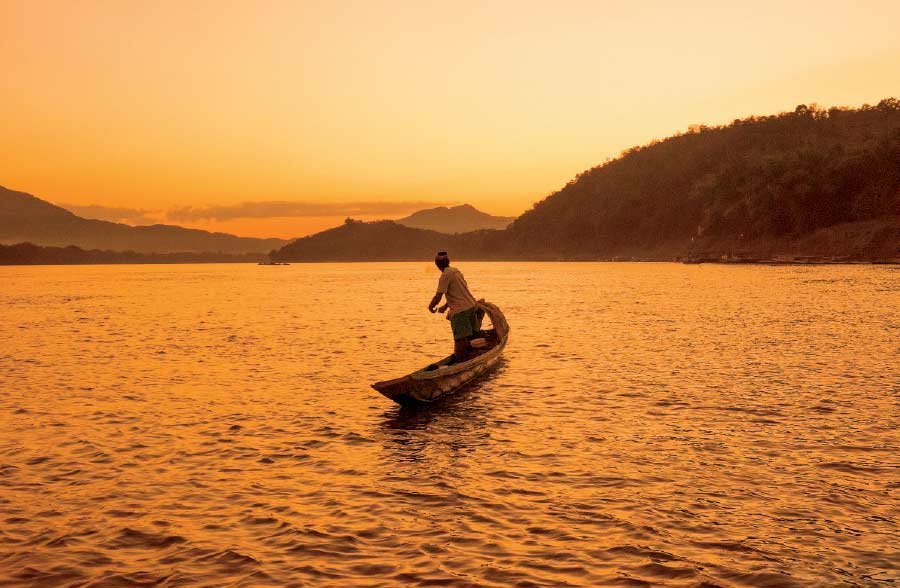 One early morning we donned ceremonial attire, knelt atop mats, and participated in an alms giving ceremony as a silent stream of orange-clad monks passed en route to the temple. We followed this with a trek up Mount Phousi for sweeping views of the lush jungle. At the entrance, we purchased caged birds to release at the mountain-top Buddha’s feet with the promise of good luck. Little cage in hand, I joyfully headed up the mountain. My appreciation of the lush jungle views quickly dimmed when I noticed one of my birds appeared to have taken an unexpected trip to heaven. Horrified at the prospect of bad luck, I hurriedly opened the cage. My heart pounded with relief as both little birds took flight under the gaze of the mammoth Buddha. 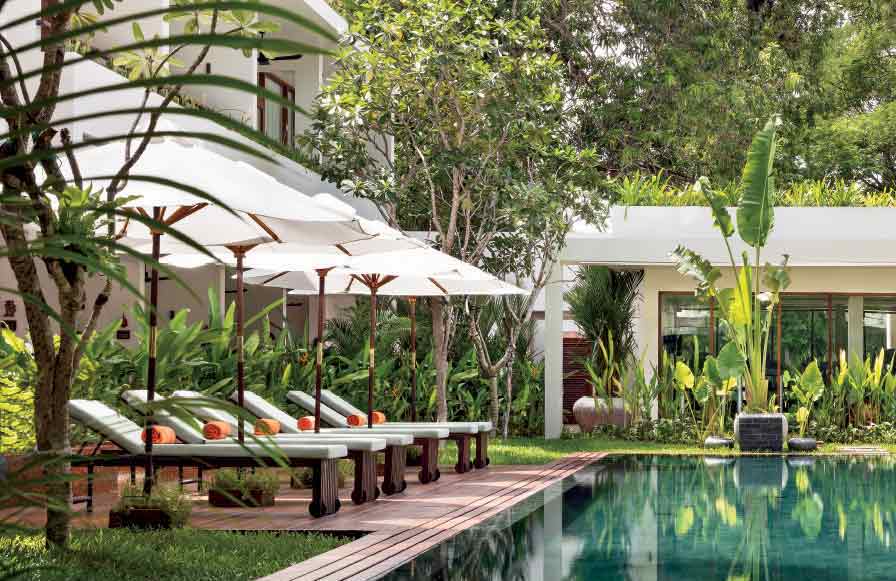 One evening as the sun slowly descended behind the mountains, we drifted down the Mekong River. Passing local fishermen wearing conical hats and silently guiding ancient skiffs, the scene made me wonder—was I an American woman traveling with friends in the 21st century or a French woman floating along the river in the 19th? 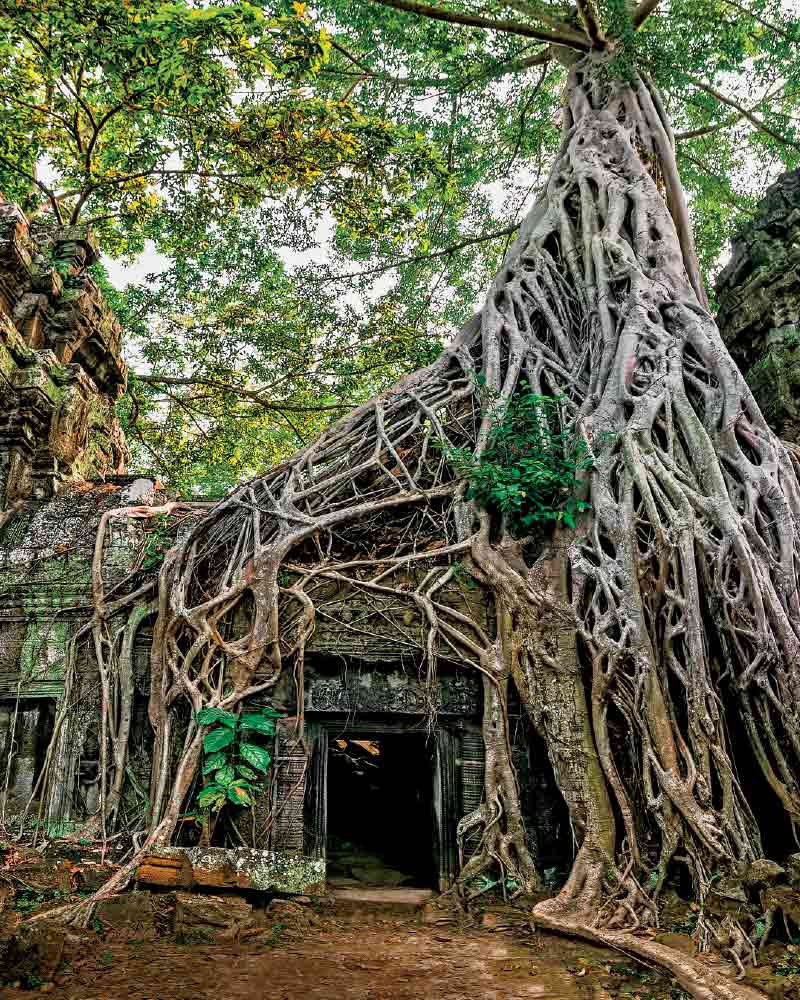 Back on dry land, we dined at a local favorite—Mando de Laos. The restaurant is surrounded by three lily ponds so beautiful they are classified as a UNESCO World Heritage Site. Overlooking floating lilies and dining by candlelight, we devoured local Lao cuisine highlighted by a very spicy mango salad. 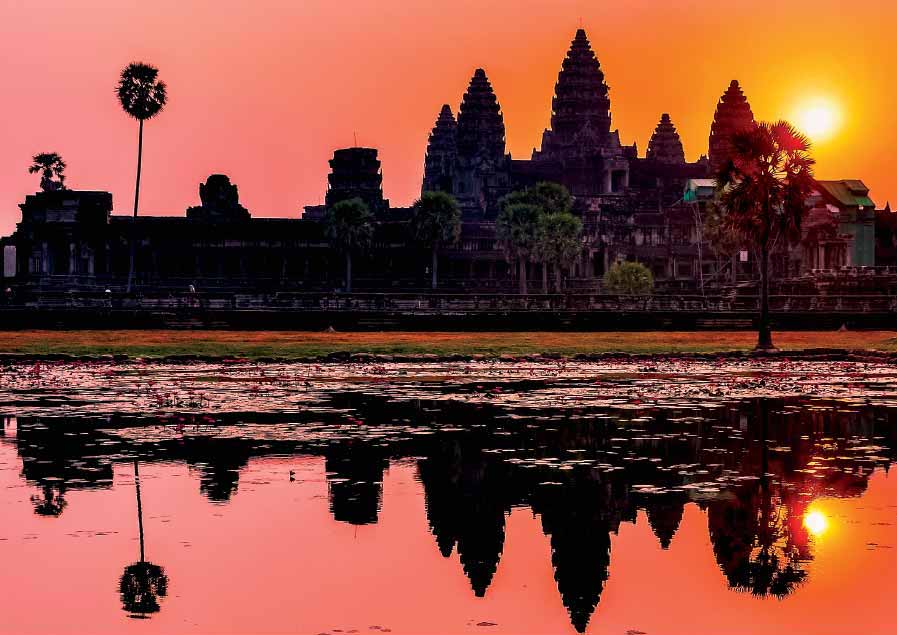 One day in Laos was an explosion of activity, first visiting the Kuang Si Waterfall where we jumped in for a swim. Uproarious laughter followed when we realized the fish were well versed in the art of pedicure. Afterward, we were off to the Laos Buffalo Dairy to sample delicious house-made cheeses, cheesecake, and ice cream all crafted from water buffalo’s milk. Approximately 94 percent of the Asian population is lactose intolerant. Water buffalo milk, however, contains a different protein strain than cow’s milk and can be tolerated. Using this milk, the Lao people can easily add dairy to their diet. The farm’s benefits are not merely dietary; it helps provide a steady income to farmers by renting and caring for their buffalo and offers English classes to school children. 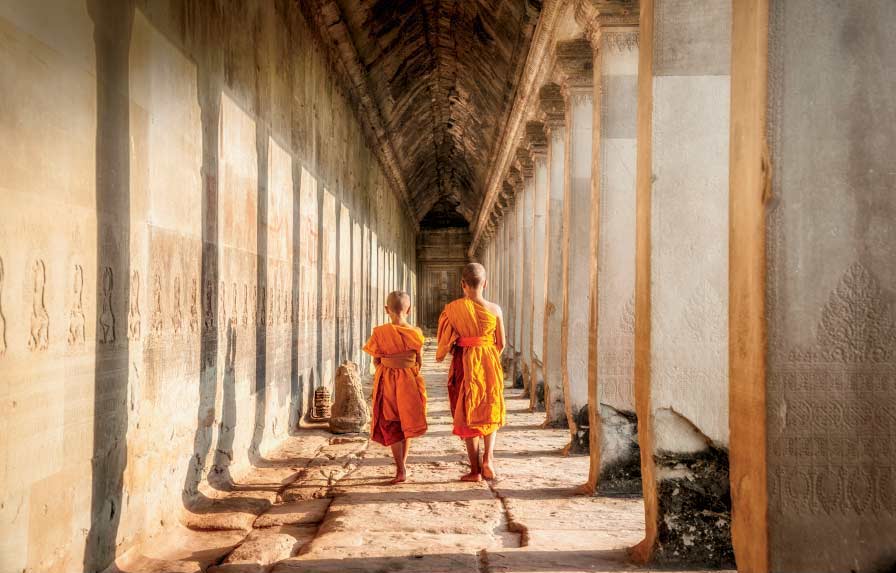 Pha Tad Ke Botanical Garden was the third stop of the day. We arrived on a local fisherman’s skiff because the river’s water level was abnormally low due to Chinese dams to the north. Our initial apprehension about boarding the tiny skiff was quickly forgotten when we encountered the exotic beauty of native Lao flora.

Our final day took us to the riverside Ock Pop Tok Living Crafts Center. Here we learned about the history of silk and the methods employed for weaving and dying. Gifted artisans spun silk before our eyes and all of us took a little something home to remember the experience. That afternoon it was off to Cambodia’s Siem Reap and its famed temples.

“When Angkorian society began, Paris and London were not much more than elaborate villages.” – Kim Fay

As the plane touched down, I was so excited to arrive in this thriving city—and to follow in the footsteps of countless journalists, movie stars, and tomb raiders. Avani’s FCC Angkor, our home base, is nestled alongside the languid Siem Reap River and exudes colonial charm. Journalistic tools of the trade dot the property and hint at the history behind the letters FCC, which stands for Foreign Correspondents’ Club. In my suite, a vintage typewriter held a typed letter welcoming me to Siem Reap—a clever touch. The Mansion (a former residence of the French Governor) houses Scribe, a glorious watering hole offering strong libations and a refurbished restaurant serving authentic Khmer cuisine and Asian fusion dishes.

Bright and early the next morning, we met our guide, a veteran photojournalist, for a tour of Angkor Wat, Ta Prohm, and several other legendary Cambodian temples. Although the 4:45 am start seemed impossibly early, a delightful journey through time ensued as we stood in awe of these ancient masterpieces. Angkor Wat, built over a thousand years ago, was even more impressive than I had imagined. My first glimpse was a faint silhouette through the marsh’s foggy breath. As the fog receded, five lotus bud temples stretching toward the Hindu Gods were revealed. Built by 50,000 artisans and laborers over forty years and constructed with more stone than all the Egyptian pyramids combined, scholars believe Angkor Wat is the world’s largest religious structure. Today it stands as a faded version of its once glorious self, but is awe-inspiring nevertheless.

My favorite temple, Ta Prohm, was both romantic and haunting as fig, banyan, and kapok trees entwined their enormous limbs around the ancient stones—simultaneously holding the temple together and tearing it apart. I left with feelings of awe and admiration for the Khmer people.

Our hunger for history sated, we headed for lunch at HAVEN, where “helping tastes good.” HAVEN is a social enterprise and training restaurant for vulnerable young adults. Students learn valuable work and life skills while patrons are treated to delicious cuisine. This was my favorite meal of the trip—the banana flower salad and fragrant curries were divine. Founder and Swiss native Paul Walliman was the consummate host and with each bite, you feel the love he has for this country, its people, and the community.

Before heading back to our Avani haven, we explored the creative and cool neighborhood of Kandal Village where contemporary art and creative artisans are tucked between the lively Old Market and leafy French Quarter.

We ended our evening and our trip with the fantastical Phare Cambodian circus. Perched ringside, we were dazzled with Cambodian stories brought to life via theater, music, dance, and acrobatics. It was a spellbinding experience, and the perfect farewell to our Southeast Asian adventure.

If you haven’t visited this part of the globe, what are you waiting for? You already have your itinerary. Book your tickets and pack your bags—magic awaits.