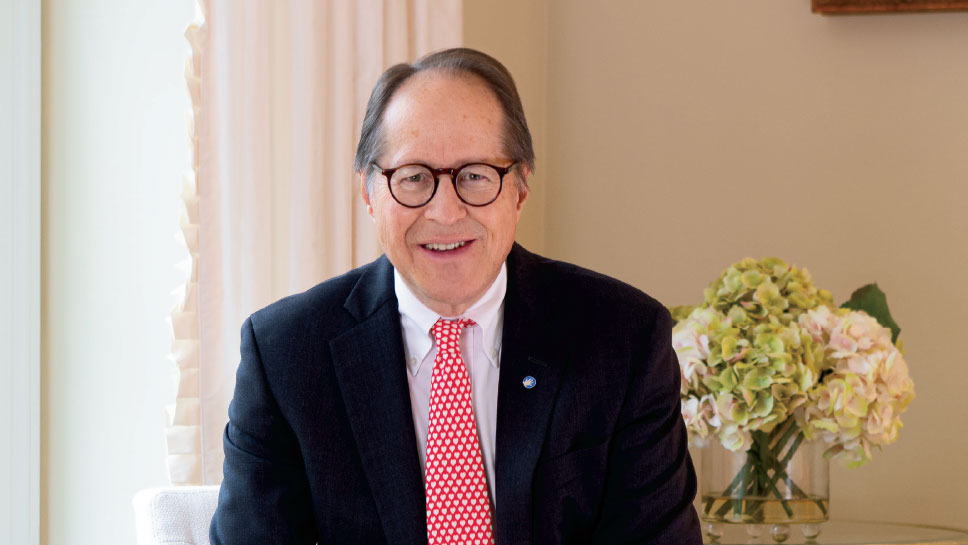 It was the day after Christmas, 2007, a blustery Chicago morning. Dr. Carl Backer was heading to Children’s Memorial Hospital (now the Ann & Robert H. Lurie Children’s Hospital of Chicago) to perform a heart transplant on baby Fintan Schiltz. Grabbing a coffee on the rush to the hospital, Backer glimpsed the cover of the Chicago Sun Times.

“There was Fintan, in a story about his family’s desperate hope for the miracle of a new heart. And here I was, on my way to perform the surgery,” says Backer. “I’ll never forget it. The donor heart call came right before that story appeared, just hours after Cardinal Francis George had made his Christmas visit to the hospital, and given Fintan a blessing.”

The next day, in his morning coffee queue, Backer saw another Sun Times cover, this one emblazoned: “Baby Fintan gets his heart!” with a photo of Backer and his team conducting the intricate, successful surgery.

“The satisfaction that comes from seeing a child come through this, and then watching that child go home with his or her family with all that behind them … it makes a deep impression,” says Backer.

For Backer, who has performed an astounding 300 pediatric heart transplants in the last 30 years, giving children a shot at a healthy life has been at the heart of his existence. That Backer, who resides with his wife Julia and their four children in Winnetka, became a surgeon, has its roots in his childhood. Backer’s father was an eye surgeon who served with the Navy in Seattle and Florida, before settling back in Minnesota. “He was an ophthalmology resident in Rochester,” says Backer, who, as a boy, made rounds with his dad to visit patients. By high school, he would scrub in with his dad on some surgeries, to observe. “I knew by that point that I wanted to become a surgeon,” he recalls. “It seemed a very worthwhile profession, to see people who were sick and then to have a hand in helping them get better.” 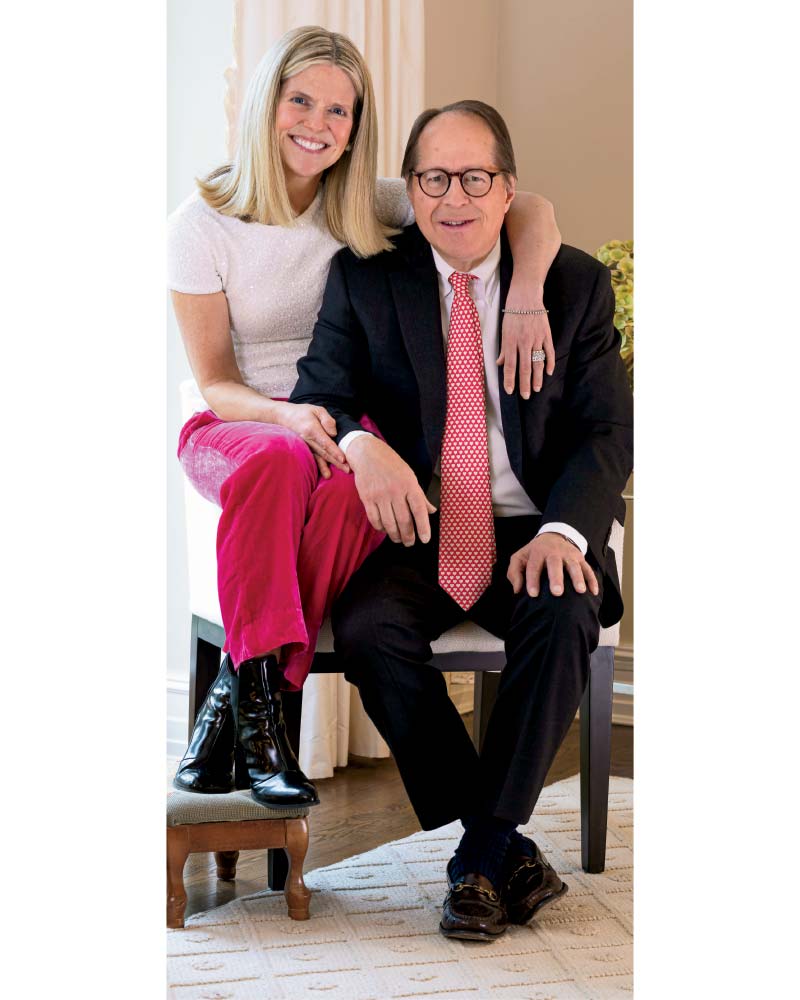 Backer studied first at Northwestern University where he got his B.A. He then completed medical school at Mayo Medical School—an epicenter of congenital heart surgery origins. He returned to Chicago for his internship and residency in cardiothoracic surgery, coming to Children’s Memorial Hospital for his fellowship, and then, longtime career.

In the United States, just over 30,000 patients undergo heart surgery each year, and less than 1,000 of those surgeries are heart transplants. Successful outcomes for those surgeries rest on a host of factors, from the provision of a healthy donor heart to the complicated logistics that have to happen very quickly while the clock is ticking, to the vast team of experts required to get tiny recipients through the surgery and recovery.

Building the teams and the expertise to do pediatric heart transplants, started a long time ago. The first successful neonatal heart transplant was done in 1985 by famed surgeon, Dr. Leonard L. Bailey, in Loma Linda, California. Three years later at Children’s Memorial, Dr. Backer flew to Texas to get the donor heart that Cardiovascular-Thoracic Surgery Chief Dr. Farouk Idriss, transplanted into 18-month-old Shavell Arnold—the first pediatric heart transplant in Illinois. Staying on as part of the team at Children’s, Backer worked in tandem with Dr. Idriss, and then with Dr. Mavroudis, who replaced Idriss in that role in 1990.

“We were on call 24/7 doing surgeries—in the beginning, about five to ten pediatric heart transplants a year,” says Backer, who became chief of the division in 2008.

With each pediatric transplant and heart surgery Backer and the team at Children’s Memorial completed, the crucial base of knowledge and understanding of the intricate procedures grew, forming the solid base upon which successful outcomes rest. At the same time, the hospital built the critical mass of specialists to take care of these very challenging patients—not just the transplants but everything leading up to the surgery, and then the care afterward.

“Technically, it’s extremely challenging,” Backer explains. The tissues of a newborn heart are very delicate. The surgeons use specialized instruments, wear magnifying glasses and head lamps, and use surgical suture filaments fine as silk. In addition, “You have to have a lot of resources … transplant cardiologists, pathologists who can read biopsies, immunologists, infectious disease experts, and more, on the care team,” he notes.

Lurie Children’s, which replaced Children’s Memorial in 2012, is now the only medical center in Illinois that conducts pediatric heart transplants.
Nationwide, Lurie Children’s is ranked as the number two center in volume of children’s heart transplants performed each year. As leaders in the field, Backer and his team have shared their knowledge in forums such as the Congenital Heart Surgeons’ Society, and multiple books. (Backer is currently editing the fifth edition of Pediatric Cardiac Surgery.) With Lurie Children’s new Stanley Manne Children’s Research Institute in place to fuel new medical research in conjunction with Northwestern University, the potential for the development of cures, procedures, and devices, suggests that Lurie Children’s contributions to pediatric heart surgery, and children’s health in general, will continue to grow.

As if to illustrate the advances research can bring, Backer, who became Lurie Children’s Chief of Medical Philanthropy in 2018, places a walnut-sized object in my hand. “That,” he says, “is the exact replica of a neonatal heart.” It is tiny, unimaginably delicate. Then Backer hands me an even tinier, button-shaped disc. “And this,” he says, “is the smallest mechanical heart valve made. It’s been in the works for more than 10 years, and we’ve been working with the team that developed it. We have put this into babies as young as three to four months of age.”

“But frankly,” says Backer, gesturing to an array of ventricular assist devices, at his side, “even though these are better than what we used to have, they are still not perfect, and improved devices are needed.”

The holy grail, in Backer’s opinion, would be the invention of an artificial heart (mechanical or genetically engineered) for children that would make the need for human heart transplants obsolete.

While such a heart does not yet exist, Backer is hopeful. Currently, in addition to performing transplants, Backer places a lot of his energy into raising research funds that make such miracles reality. Lurie Children’s Vision 2025 campaign—a push to raise $500 million—will gather funds that will go to advance pediatric medicine and science through research, and care for more children, in addition to other objectives.

“We raised a lot of money to build Lurie Children’s,” says Backer. “Now, we need to ensure that we have the right experts and resources for the research to create not only new devices, but cures for diseases, and, to do community outreach.” In summary? “We don’t want to just treat sick kids, but to keep kids from getting sick in the first place,” Backer concludes. “The Chicago area has amazing philanthropists who understand the importance of this. The fact that we have such a great hospital is testimony to that.”

For more information on how to support Lurie Children’s Vision 2025, visit luriechildrens.org/en/ways-to-help.