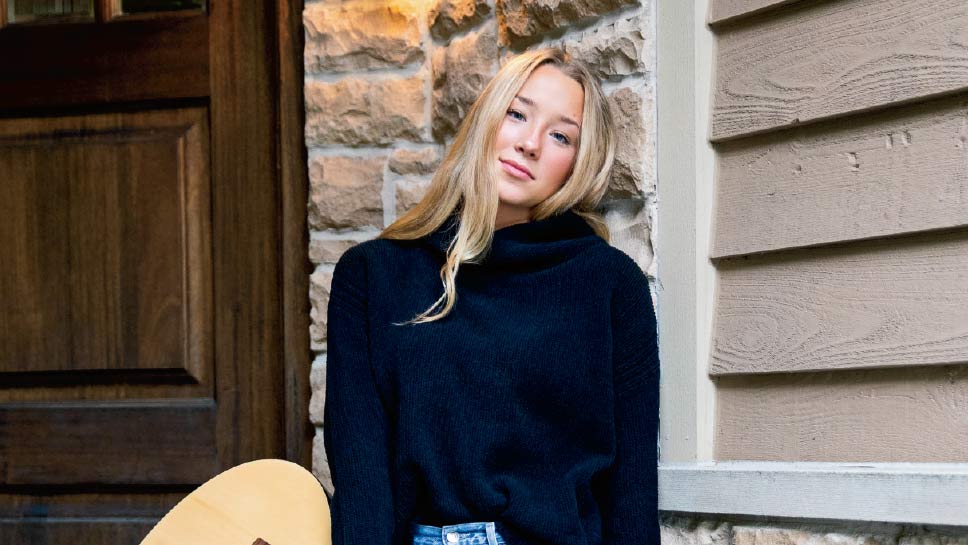 New Trier High School Senior Lauren Gottshall discovers how music can soothe the soul and change the world, one note at a time. PHOTOGRAPHY BY ROBIN SUBAR

Glencoe’s Lauren Gottshall believes a song is only as good as the story it tells, which is why this young singer/songwriter is seeing to it that her music heals whenever it is heard.

Gottshall, a senior at New Trier High School, discovered a deep connection to music and in particular, songwriting while struggling with the emotions that come with life’s ups and downs.

“For as long as I can remember, music always resonated with me. But when my parents divorced, I discovered how music can heal,” Gottshall says. “I found it was easier to put my emotions into a song, rather than just talking about what was troubling me.”

As the dark days grew further and fewer between, Gottshall vowed to use her music as a way to help others. She began performing at charity functions such as the Park Ridge Vine Street BBQ where proceeds benefit multiple charities. Gottshall also became a regular performer at the historic Glencoe Grand Prix—a long-time fundraiser for the school district. By turning her music-making into a philanthropic endeavor, Gottshall discovered a new purpose in life.

“I have grown more and more interested in performing at events that are about giving to others. Music is so universal; you never know how lyrics can impact someone who is struggling. To know I can use my love for songwriting to support worthy causes designed to improve someone else’s life, is very rewarding,” Gottshall shares.

No sooner was Gottshall bitten by the benevolent bug than she learned the heartbreaking news that her grandmother had been diagnosed with lymphoma. Gottshall immediately sprang into action, joining Find a Cure—an organization comprised of Loyola and New Trier students who commit themselves to fighting cancer, particularly Leukemia and Lymphoma.

After organizing one philanthropic event after another on behalf of Find a Cure, Gottshall earned the title of Vice President during her Junior year. She made it her mission to combine her passion for songwriting with her commitment to service.

With her grandmother at the forefront of her mind, she spearheaded an annual Leukemia and Lymphoma fundraiser at the Writers Theatre in Glencoe. This past September was the second annual event, where guests enjoyed performances by a variety of Glencoe Academy of Music students and Gottshall herself. This year, Gottshall excitedly debuted her most recent song, “Better Luck,” an emotional and relatable ballad about being in the right situation, but at the wrong time.

As it pertains to Gottshall’s music career, there is no doubt that the young artist is exactly in the place where she is meant to be at this point. She has overcome emotional hardship, soothed by the solace that notes can provide while discovering new meaning in her young life.

“What I’ve learned from creating these fundraisers is that one person can have a real impact. Getting involved in organizations and causes outside of myself has been truly rewarding,” Gottshall explains. “I realize the importance for all young people to find a cause and commit to it. Knowing I can make a difference for the better is incredibly fulfilling, giving me the same sense of joy that comes from putting a smile on someone’s face with my music.”