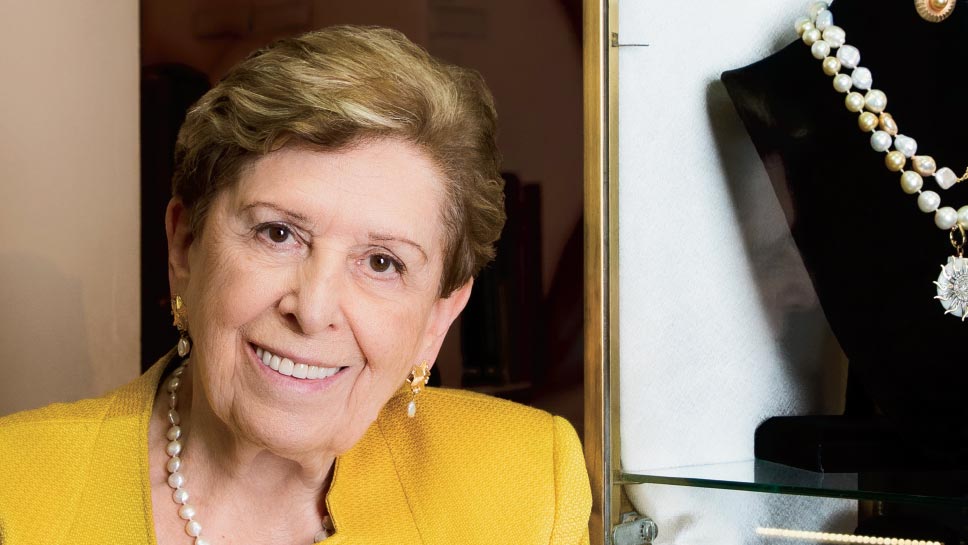 In an era when the jewelry business has been overtaken by big companies with cookie-cutter stores in shopping malls and big-budget advertising campaigns on television, Eve Alfillé is a throwback.

This visitor to her downtown Evanston gallery was treated to a viewing of the tools of her trade, which wouldn’t be found anywhere near today’s lines of mass-produced bling.

“All these tools which used to be ubiquitous, mostly made way back by hand from French and Italian companies, you can’t get these anymore.” Alfillé says. “I used to work in archeology so I really appreciate the link. There are some old Egyption murals that show a goldsmith workshop. It’s fascinating.”

Alfillé’s designs reflect a highly creative, deliberative process that produces unique pieces intended to speak to the souls of her customers. She describes the connection to a piece of jewelry as a “spiritual” one.

“I have friends who are painters and they work very rapidly. They ask me, ‘How can you stand it working so slow?’” she says. “It is painstaking, but to me that’s part of the process. As I work I’m changing the design or going where the design takes me. It’s both physical and intellectual.”

Her path to the fine jewelry business wasn’t as direct as perhaps others in the field. She spent time as a stock broker and also taught Advanced Placement for high school. But all of those experiences provide inspiration.

In addition to doing custom work for clients, including engagement and wedding bands, Alfillé releases two new series each year that draw upon specific themes. In the past these have included an “Undercurrent” series with aquatic touches, a “Pompeii” series based on the ancient Roman architectural site, and a collection inspired by the Medieval Era. Over the years she’s created more than 50 of these special series.

“There’s a lot of experimentation because everything I do is pretty much one-of-a-kind and I challenge myself with each series not just with an idea that I want to convey,” says Alfillé. “I use different techniques and different metals, each of which brings a different challenge.”

Alfillé was born in France and spent her childhood there, which included spells hiding from German soldiers during World War II. These experiences, and her experience as an immigrant, also fuel the inspiration for her designs. She spent time with family this summer in a small town back in France and was taken with the ornate doors on houses that were built centuries ago.

“When you live abroad you learn a different way of looking at things and when you return you’re no longer the same person,” she says. “You see things you wouldn’t have seen otherwise. I took thousands of pictures of these doors. No two of them were alike. We say the French have lots of cheeses but they have even more doors.”

Another feature of Alfillé’s jewelry designs is that they are highly functional. They’re meant to be worn, not to sit in a box. One of her more clever talents is making pieces that can be worn in different ways. A necklace can come apart and its pieces be worn as earrings or a bracelet. She demonstrates with a necklace she’s currently wearing, and it works like an elegant puzzle.

A lot of her custom work involves taking a piece that may have been handed down from a relative and repurposing it based on the new owner’s particular tastes. She offers a new way to wear an old ring or necklace.

One small piece of advice, though, for customers who see something elsewhere, say at Tiffany’s, and want her to reproduce it.

“First of all, somebody else has already designed that,” she says. “I tell them I can make them something else that’s unique to them.”