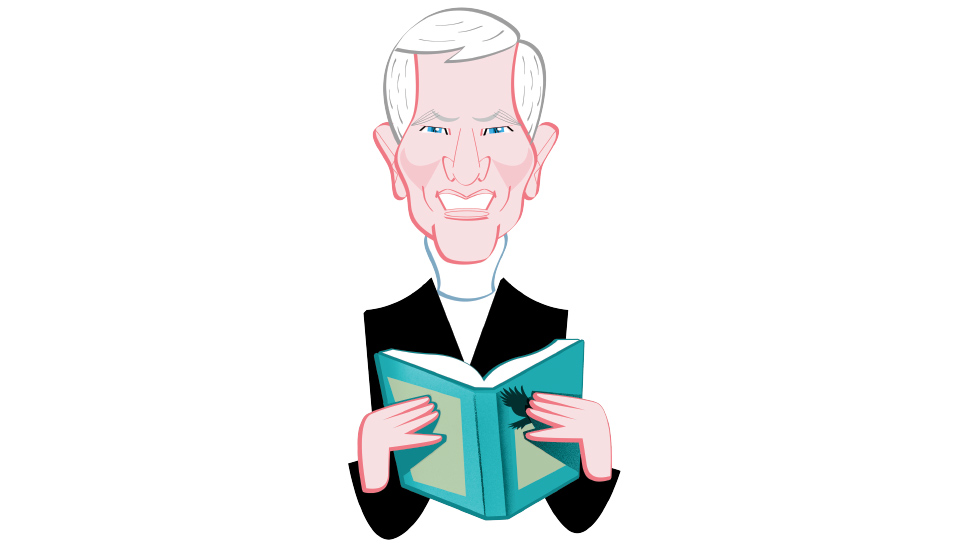 Former lawyer Joe Brown, father to makeup industry powerhouse and former Sheridan Road cover girl Bobbi Brown, embarked on a new career as a children’s book author at the age of 70. Now 84, the author and grandfather is still sparking the imagination of kids across the globe. ILLUSTRATION BY ROBERT RISKO

Marceau is my name and this is my tale… And so begins the story of the now-beloved children’s book character, and more importantly, the tale of his creator, Joe Brown, and his second chapter.

Brown’s own story begins in Chicago. A lawyer at just 21, he practiced for 50 years, taking a few breaks here and there to pursue other adventures when law became too “stuffy,” like taking people all over the world in his chartered airplanes and renting beachfront homes to the rich and famous in Honolulu.

But these business endeavors are not the heart of this story. The really good stuff begins when Brown’s children were young. He began to tuck them into bed with stories he created about a New York taxi driver named Marceau who would share stories with a young passenger in his backseat. In those stories, he has a superpower: he can speak to and interact with animals, using this power to solve problems and help those in need.

Unlike most do-it-yourself bedtime stories, Brown’s were not only more thrilling and far more creative than most, but every single one was told completely in rhyme. “When we were young, my siblings and I used to write rhymes back and forth, teasing each other,” Brown laughs. “Rhyming just comes naturally to me.”

After a while, his children asked him to write these stories down, and they read them together until time went on, as it does, and those sheets of paper ended up in a little white box in the attic and the three children grew up, got married, and had children of their own.

Flipping the pages forward to his 70th birthday, Brown found himself in Telluride with family to celebrate. Daughter Bobbi said she needed to stop in their favorite local bookstore to pick something up. When they arrived Brown saw a book with a very familiar name on its cover—for his birthday, she had gathered those special bedtime stories from the attic and compiled them into a hardcover book, printing 100 copies. “Here I was, all of a sudden an author,” recalls Brown. “I thought, ‘What an incredibly nice thing to be.’”

Brown gave away those 100 books to friends, receiving a great response from all who read them. He quit law and decided to dedicate himself to writing: “The best retirement I could ask for,” he says.

Fairly early on, his stories caught the eye of Scholastic, and the new author and media company developed an inspiring partnership, sending Brown into schools across the globe—from Native American reservations to Ho Chi Minh City—and enough copies for all in attendance to take one home, free of charge.

There Brown reads to the children, usually 100 or more at a time, from 3rd to 6th grade, and talks with them. “There really is such a place called imagination—I show them how to get there,” he explains. “I teach them that imagination is the most important thing in the entire world, that nothing has ever been created without first being imagined, and that it’s the most private place—no one can get in there but you.”

He has worked closely with his illustrators to bring to life his creations, and help transport readers to wherever Marceau must go to save the day, whether the rainforest, or closer to home, during Hurricane Katrina. In addition to the power of imagination, Brown’s books emphasize vocabulary building, through sophisticated word choice (and accompanying definitions), and pronunciation, through their rhyming structure.

The author has included his 13 grandchildren in the writing process over the years and they have also served as namesakes for some of the books’ many animal characters, like Maxwell Moose. Now at 84 years old with nine books published, the Lincolnwood resident says, “I love what I’m doing—it’s my favorite thing in the world to do.” May we all be willing to take the leap to let our imaginations lead the way.