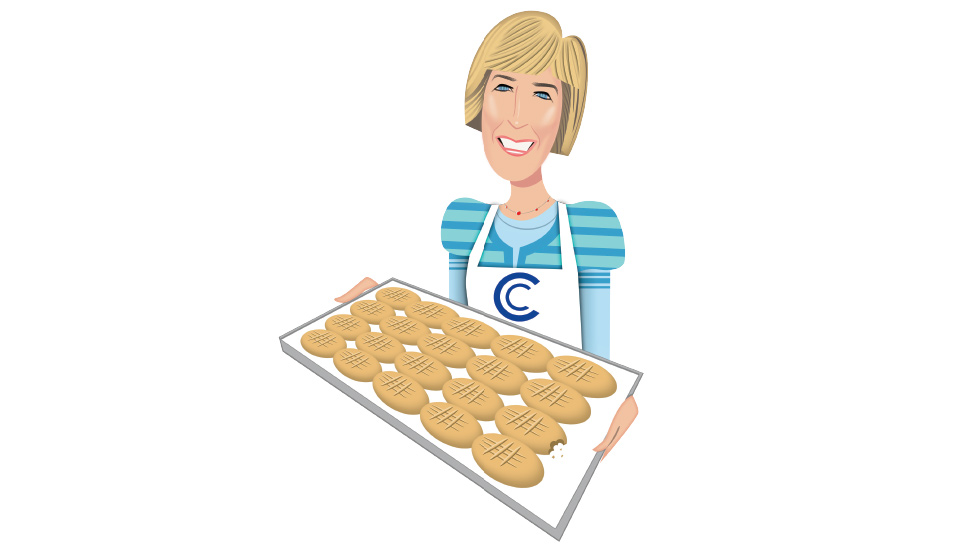 Carol Goldman took a few simple ingredients and made a name for herself coast-to-coast. ILLUSTRATION BY ROBERT RISKO

The 1970s were the heyday of the cookie entrepreneur. But Mrs. Fields was sold to an investment firm in the 1990s and Famous Amos has had several owners since Wally Amos (with a financial assist from Marvin Gaye) started selling cookies from a shop on Sunset Boulevard. Carol Goldman, on the other hand, still helms the business she launched from her Highland Park kitchen in 1979.

A former social worker, Goldman was just an avid home baker when family and friends suggested she go big-time. So, she whipped up a batch for a test run at Sunset Foods and hasn’t stopped since. In 1983, People magazine gave her a shout-out and the orders rolled in. “After that, it was time to move out of the house and build my own bakery,” recalls Goldman. “I knew nothing about marketing or production planning, I just knew how to make a great homemade cookie. But I figured it out and my husband Peter really helped me.”

Today, Carol’s Cookies are sold across the country, available at such outlets as Whole Foods, Sprouts Farmers Market, and Fred Meyer. While Goldman’s business may seem old school compared to the tech-driven start-ups that make headlines now, when we consider the limited landscape for business-minded women in the 1970s, spinning flour into gold was no mean achievement. And while the business took off from the get-go, it’s required more than sugar and spice to fuel ongoing success.

“I had to make a big decision in 1999,” shares Goldman. “Continue to coast along or work at growing the business to a nationwide success.” Her son Jeff had begun helping out the year after graduating from Tulane University and urged Goldman to aim higher. “We had to change our chocolate supplier, our butter supplier, create new packaging, hire more people—it was nerve-wracking,” admits Goldman. “But I trusted Jeff, and as long as he never sacrificed the hand-made quality, I had nothing to lose.” And how. In 2018, the company produced eight million cookies and sold over 30,000 gift boxes.

The food scene has changed dramatically since Goldman sent her first few dozen cookies out into the world. Between low carb diets, the near demonization of sugar, butter, and flour, and the popularity of energy bars and smoothies, it would seem a good old cookie doesn’t stand a chance. “Food trends have come and gone, but the cookie remains a staple,” suggests Goldman, who at 75 still heads into work every day. “We have an expensive cookie. At $3.00, it’s an indulgence, a special treat. But if customers appreciate quality, we should be around for another 40 years.”