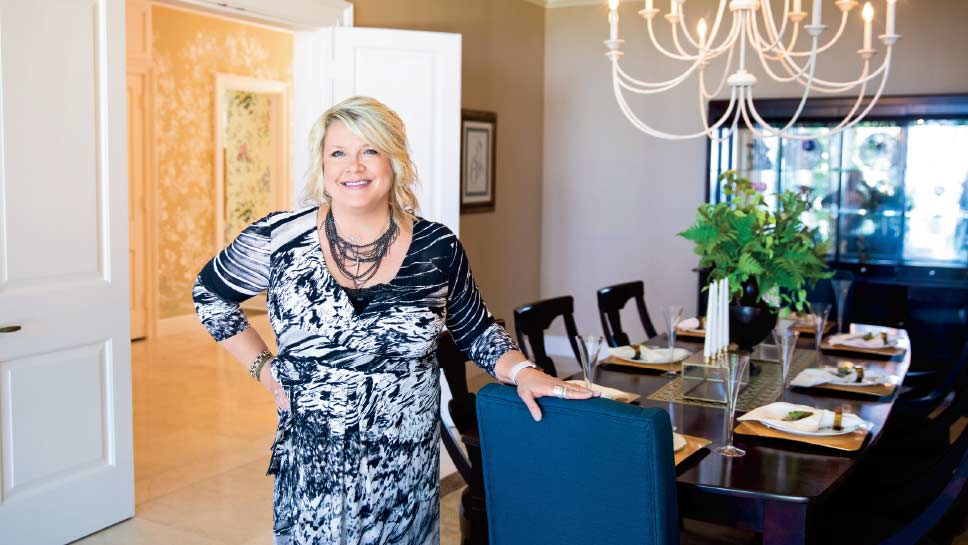 As the 1990s were coming to a close, Barbara Bliss found herself a single mom with three young children and a stack of bills that needed paying.

She had worked for an architect earlier in her career and enjoyed the experience so she obtained her real estate license and began flipping houses. But the volatility in the real estate market eventually led her to seek more stable footing, so she purchased a Showhomes franchise in 2005.

Showhomes is a national home-staging company with franchises throughout the country. Bliss set up shop on the North Shore and she’s been killing it ever since.

“I can go into a house and visualize what it needs,” she says. “I have good intuition.“

With the real estate market becoming increasingly competitive, Bliss says getting a house staged is more important than ever.

“My favorite houses to stage are empty ones,” she says. “I love to just go in and take a house and start all over, stage it, and watch it sell.”

She adds, “The market’s been hit pretty hard here in the Midwest and you can’t leave a house empty because it won’t sell.”

Bliss’s franchise, which covers territory spreading from the North Shore to Barrington is one of the top performing Showhomes franchises in the country. She currently has 30 houses staged and sales volume has exceeded $175 million since she opened her doors.

One of Bliss’s top services is the Showhomes Signature Home Manager product. This unique twist on home staging is designed not just to stage a home, but to make it come to life. Homeowners get peace of mind and pay nothing upfront.

Bliss and her team will carefully stage a house and then bring in an executive to live in the home. The executive must pass a thorough screening process but pays below-market rent and maintains the house until it’s sold significantly faster with higher offers.

Executives might be transferees coming to the area for a new position, empty nesters, or people who’ve just sold their house and are in a transition.

“It’s really a win-win-win,” says Bliss. “For the homeowner, the home manager, and the realtor.”

She adds, “We’re on a really good run with the Home Manager program. It’s brought in significant revenue with the same great staging at a fraction of traditional staging costs paid at closing.”

Bliss has passed on her love of houses to the children she was raising on her own many years ago. Her daughter is an interior designer, and her two sons are a general contractor and a sales representative. She also stays active in the community, with the church, and works with a number of
charities, including some that focus on children in need.

“It’s important for me to help those in need,” she says. “I’m grateful to be successful and passionate about giving back to my community.”

While the path from single mom to successful stager hasn’t always been easy—along the way she even went to school to get a business degree—she knows she’s in the right place.

“I’ve worked my tail off,” she says. “I’m grateful I’ve been able to provide for my family and the community.”

Barbara Bliss and Showhomes can be reached at 847-247-9191 or at [email protected], showhomesnorthshore.com.