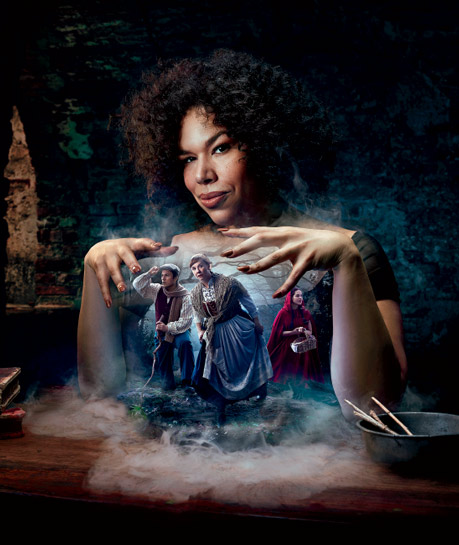 Director Gary Griffin kicks off Writers Theatre’s 2019/20 season with award-winning musical Into the Woods, Stephen Sondheim’s rebellious take on the classic fairy tale. Writers Theatre is launching into their 2019/20 sea- son with panache, calling on Gary Griffin, one of Chicago’s most esteemed and versatile directors, to breathe new life into the perennial favorite Into the Woods. Tackling a musical with such name recognition and pedigree is no easy feat: premiering on Broadway in the fall of 1987, Woods was a runaway hit, garnering several Tony Awards, prompting subsequent U.S. and world tours, and even a Meryl Streep-led Dis- ney feature film in 2014, which was nominated for multiple Gold- en Globe and Academy awards.

Often described as both smart and subversive, Woods remixes the stories of some of the most recognizable storybook characters, Little Red Riding Hood, Jack (of Beanstalk fame), Rapunzel, and Cinderella. It’s a story of adventure, of family, with some witches’ curses for good measure, all set to music by the incomparable Stephen Sondheim.

This will not be Griffin’s first time at the proverbial rodeo when it comes to Sondheim’s work. During his tenure with Pegasus Theatre on Chicago’s north side, the director was joined by the iconic composer and lyricist on a staging of Saturday Night in the late 1990s. It began a lifelong camaraderie between the two.

From there, Griffin moved to the Chicago Shakespeare Theater, serving as their Associate Artistic Director before stepping down in 2017. “Musicals and Shakespeare have a lot in common, the poetry, the heightened language,” Griffin explains. During his tenure, he directed several Sondheim works, including A Little Night Music and Sunday in the Park with George. During that time, the Rockford, Illinois-native also made his Broadway directorial debut with The Color Purple, in 2005.

When Michael Halberstam, Writers Theatre’s Artistic Director, approached Griffin with the idea of adapting Woods for their stage, they together posed the question, “What do these stories mean to
us now?” In taking a new look at the material, Griffin discovered, “The show is really mischievous, but it also has really fascinating and important things to say about community and responsibility.”

Griffin is particularly thrilled about his cast, including Halberstam as narrator, and Writers Theatre’s inventive staging, a must in reimagining a well-trod tale such as this. “We have an amazing cast—that’s when you really get to direct, when you have people making strong choices who allow you to see the characters in fresh ways,” he says.

The biggest task was scaling the production appropriately to make it fit like a glove for the space: “We want to make the audience feel as though they’re in the woods, not watching the woods. To intensify the intimacy, we’re doing the production in the round. The audience will be right alongside the cast, so close they can take in the texture of the costumes.”

“Especially if you think you know the show, we hope to lead you into a new discovery,” Griffin shares. “There are some fun surprises in store.”