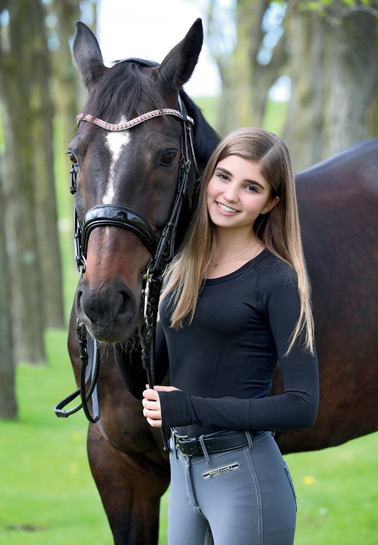 Lake Forest’s Bia Leffingwell trains in the art of dressage.

When Beatrix (Bia) Leffingwell says she was raised at “the farm”—“the farm” being Tempel Farms in Old Mill Creek, Illinois—she means it literally. “When my parents first left the hospital with me after I was born, we went straight to the barn, not home,” she says.

Many years prior to that, in 1958, the 15-year-old’s paternal great grandparents, Tempel and Esther Smith, imported 20 rare, endangered Lipizzan white stallion horses from Piber, Austria after a year of negotiations with the Austrian government, there- by founding the first full-scale Lipizzan stud farm in the United States. Now, Tempel Farms boasts the largest privately-owned herd of Lipizzans with more than 80 horses and is one of the few places in the world where Lipizzan horses are bred, trained, and performed on the same property.

In fact, 2019 marks the 60th anniversary of the birth of the first Lipizzan foal at Tempel Farms and is also the 37th performance season of its signature 90-minute program of synchronized movements, athleticism, and harmony between horse and rider set to classical music.

“Tempel Farms has always been well-known for our cute baby horses,” says Leffingwell. “We’re calling 2019 the year of the baby because we’re celebrating the arrival of eight Lipizzan foals this season. I love the segment in the show with the babies. It’s hysterical to watch them run around. But it’s basically a 10-man job to get them where they need to be!”

The birth of the rare horses symbolizes hope for the future of the Lipizzan and shows Tempel Farms’ longstanding commitment to preserving the living history of the 400-year-old breed. And it remains a family affair: Leffingwell’s grandmother and great aunt are “in charge of the whole thing,” her second cousin Esther Buonanno directs Tempel Lipizzans, and her father manages Tempel Farms. Of the grandchildren, Leffingwell explains, she’s the most involved with riding.

Though, to say Leffingwell is “involved with riding” significantly downplays her accomplishments. She’s nationally recognized in the Olympic sport of equestrian dressage and is a 2016 Champion of the National Dressage Pony Cup, 2017 Reserve Champion in the National Championships of the USDF Children’s Division, and is one of the youngest in the country to receive the 2018 Silver Medal Award from the United States Dressage Foundation.

What she does is different, though, than what you’ll see at a Tempel Farms’ performance.

“Competitive dressage is a completely different sport,” Leffingwell explains. “It’s more modern and effortless, and it’s based on elegance. You have to look like you’re doing nothing when you’re riding, even though you’re trying to get through a brutal test. The horse has to look like this beautiful majestic creature that is not subject to gravity at all. It turns into an art form and is all about the way you present your picture.”

Leffingwell’s mother was formerly a dressage trainer and had two students compete at the 2004 Olympic Games, and Leffingwell says she wants to “be like her mom” and describes her moth- er as her “biggest supporter.” Leffingwell has considered becoming a trainer, following in her mother’s footsteps, or a breeder, or a horse salesperson in the future but, for now, she has her sights set on a medal (or two).

“I know that I want to do this for the rest of my life,” she says. “The national recognition was reassurance for me that what I’m doing is my passion and now I have goals for different titles I can earn. I’ve always wanted to go to the Olympics, which I know

is something everyone wants, but I think I can do it if I put my mind to it.”

First, though, she has to qualify for the North American Youth Dressage Championships on the Juniors Team via the Global Adequan Dressage Festival this winter season. That means Leffingwell spends upwards of three hours at the barn every day during the school year and will now take just one day off per week in

the summer for additional workouts. She rides two horses, Luke Skywalker, 19, and a new addition, Nymphenburg’s Sylvester, 11. Because of Luke Skywalker’s age, this year might be his last for intense competition, so Leffingwell plans to ride and train with both and see how far she can take them.

All that said, Leffingwell is still just 14-years-old, so she also plays on her school’s varsity field hockey team and loves to “work out, relax by the pool, and spend time with her family, friends, and dogs.” Sounds like the average American teenager, aside from the Olympic Gold we know is in her future.