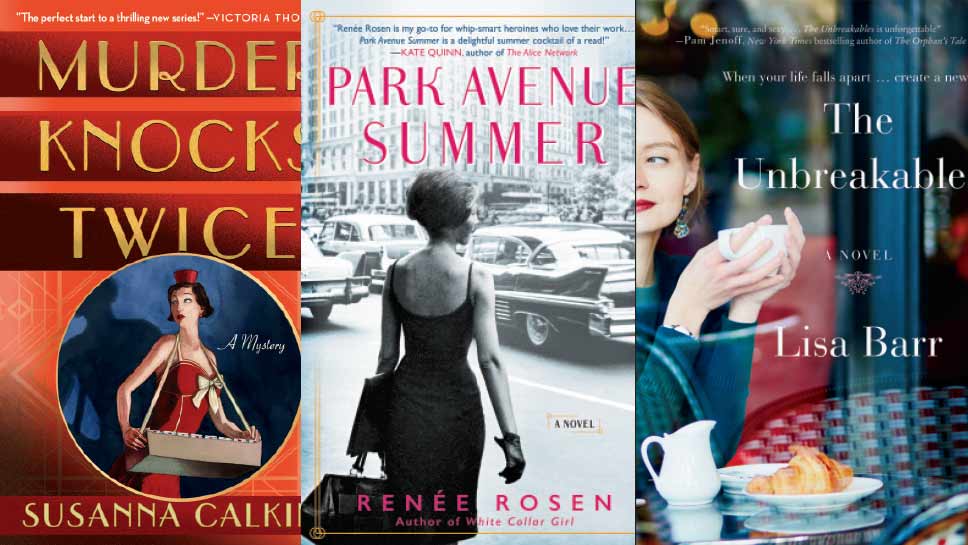 The first mystery in Calkins’ captivating new series takes readers into the dark yet glittering underworld of a 1920s Chicago speakeasy—The Third Door. Cigarette girl Gina Ricci is enchanted by the harsh, dangerous world’s sleek socialites, rowdy gamblers, and the brooding photographer. Whispers swirl about Gina’s predecessor, who mysteriously died and the photographer, Marty, warns her to be careful. When Marty is brutally murdered, Gina is determined to track down his killer. What secrets did Marty capture on his camera—and who would do anything to destroy it? As Gina searches for answers, she’s pulled deeper into the shadowy truths hiding behind the Third Door.

A famous actor is shot within hours of returning to his small hometown in southern Illinois. The investigation into the shooting reveals that the actor had written a screenplay about growing up there, one that could destroy families, careers, and the reputations of some of its beloved citizens. By the end of the week, secrets and lies are exposed, a local hero is dead, and the least likely suspect is jailed for the crime, challenging the small-town sheriff’s perception of justice. It’s a shocking tale with multiple twists and turns, in an all-too believable premise.

Alice Weiss leaves her small midwestern town to chase her big-city dreams and unexpectedly lands the job of a lifetime working for the first female editor-in-chief of Cosmopolitan magazine, Helen Gurley Brown. Nothing could have prepared Alice for the world she enters. While pressure mounts at the magazine, Alice struggles not to lose sight of her own dreams as she’s swept up into a glamorous world of five-star dinners, lavish parties, and men who are certainly no good.

THE LAST PIRATE OF NEW YORK: A GHOST SHIP, A KILLER, AND THE BIRTH OF A GANGSTER NATION
Rich Cohen

Handsome and charismatic, Albert Hicks had long been known in the dive bars and gin joints of the Five Points, the most dangerous neighborhood in maritime Manhattan. For years he operated out of the public eye rambling from crime to crime. His criminal career reached its peak in 1860, when he was hired on an oyster sloop. His plan was to rob the ship and flee as he’d done before. But the plan went awry and the voyage turned into a massacre—leading Hicks to his last desperate flight. Long fascinated by gangster legends, Cohen tells the story of this notorious underworld figure, from his humble origins to the wild, globe-crossing, bacchanalian crime spree that forged his ruthlessness and his reputation, to his ultimate incarnation as a demon who terrorized lower Manhattan, at a time when pirates anchored off 14th Street.

A delicious, captivating novel about a woman from Chicago who jets off to France after her “perfect” marriage collapses, putting the broken pieces of herself back together while rediscovering her own joie de vivre—a lust for life, art, and passion. Her journey begins after the worst birthday ever, but perhaps that horrific evening might just be the gift of a lifetime.

An engaging novel about how love, friendship, and family find a home at the Printed Letter Bookshop. One of Madeline Cullen’s happiest childhood memories is working with her Aunt Maddie in the quaint bookshop. But by the time Madeline inherits the shop, family troubles and her own bitter losses have hardened her heart toward her once-treasured aunt—and the now struggling bookshop. Madeline intends to quickly sell the shop but when her professional life takes an unexpected turn—and a handsome gardener upends all her preconceived notions—she questions her plans and her heart, and begins to envision a new path for herself and for her aunt’s beloved shop.

All available at the Lake Forest Book Store and Winnetka’s The Book Stall.