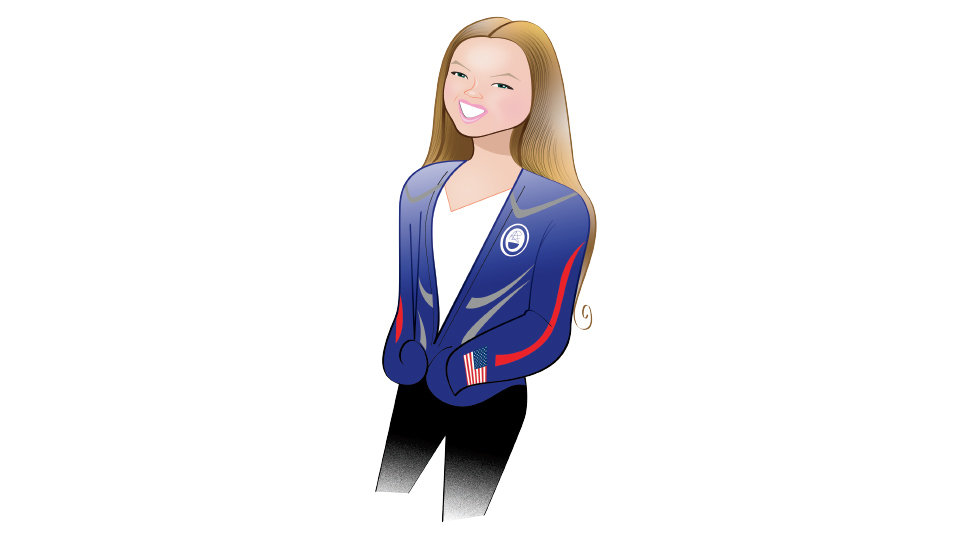 Lake Forest’s MaryGrace King is a swimming phenom. At only 14, she is breaking records in the field, while also making her mark as a gifted writer, top student, and, potentially, successful computer engineer. A bright future lies ahead for this incoming high school freshman—an Olympic hopeful. ILLUSTRATION BY ROBERT RISKO

Fourteen-year-old MaryGrace King has her sights set on Paris. The year? 2024. No, not for a college exchange program or future family vacation—the teenager is gearing up for next year’s Olympic trials, hoping to hit the world stage four years later. A dedicated swimmer since the age of 6, King is primed to achieve this ambitious goal. Top-10 in the state for almost every event in the sport since she was 9 years old, the talented athlete continues to get stronger with every year.

This type of elite athlete status does not come with an easy schedule. With a national IMX ranking of 34 in her age group, an IMX zone ranking of 4, and number one ranking in the state of Illinois, MaryGrace stays competitive through rigorous practice. During the school year, practice runs from 5:30 to 8:30 p.m. after a full day of classes. Over the summer, she is in the water four hours a day, with an hour of strength training in between.

MaryGrace has been swimming under coach Michael Lawrence at the Lake Forest Swim Club—former home to Olympian gold medalists Conor Dwyer and Matt Grevers—since the beginning, and with Andrea Jane Block (AJ) at Lincolnshire Swim Club, the latter her “summer squad.” Distance events, such as the 400 IM, are her main focus, as well as the 800 and 1500 free categories, and open water swims. She rarely misses a practice.

MaryGrace considers both coaches to be mentors and also looks to the career of fellow swimmer Katy Ledecky for inspiration: “She has always been a role model to me. It’s so cool to see other women being recognized just as much as the guys, especially since she’s a distance swimmer like me.”

But MaryGrace—known to all simply as “MG”—is not just a swimmer, but a well-rounded young woman: a straight-A student, member of the National Honor Society, and student council at the School of St. Mary (she’ll start at Lake Forest High School this fall as a freshman). For now, she counts University of Wisconsin at Madison and Stanford among her college picks for 2023, computer engineering her potential major.

Out of the pool, she is also a talented musician and singer—a self-taught ukulele player and co-emcee of her school’s talent show—and an avid reader and writer. MaryGrace will participate in an application-only writing workshop this summer at Lake Forest’s Ragdale, one of the largest interdisciplinary arts communities in the country. Church is also an important part of her life—she serves at the altar most Sundays.

Giving back is also a priority for the soon-to-be high schooler. Though helping combat the issue of homelessness is the main cause she fights for, MaryGrace has volunteered in the past for Feed My Starving Children and has helped organize fundraisers through school for charities like Water For Life. This summer, she will lend her time to GLASA, the Great Lakes Adaptive Sports Association, through assisting swim lessons for individuals with disabilities.

While MaryGrace looks up to her two older stepbrothers, younger sister Madison, 9, is decidedly following in her sister’s smooth wake, already breaking some of her big sister’s records in the under-10 category. “It’s cool to watch them work together,” says mother Sandi.

MaryGrace, however, is not just a role model for younger generations, but for all of us: her dedication, balance, humility, and grace should inspire anyone at any age. This summer, we can all take a cue from the talented teen to follow our dreams and move forward fearlessly, no matter how deep the water. As she says, “It will all pay off in the long run if you’re trying your best.”