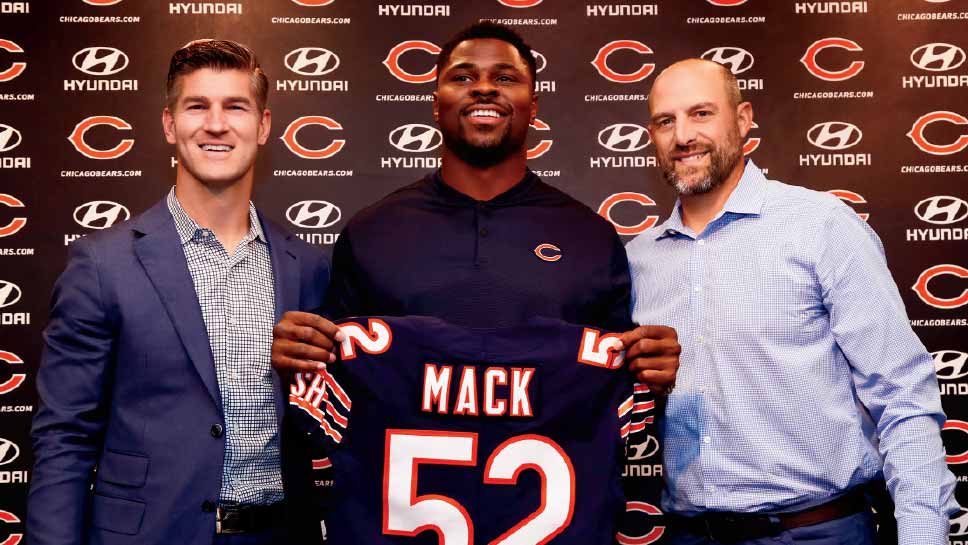 Chicago Bears head coach Matt Nagy—a Lake Bluff resident—lifted a starving, rabid fan base with his creativity and congeniality in his first year as an NFL grid boss. PHOTOGRAPHY COURTESY OF THE CHICAGO BEARS

An 8 1⁄2-by-11-inch sheet of paper was Matt Nagy’s canvas in his youth. He did not use it to doodle. He did not use it (that would come later) to draw up football plays, some of them super serious, others wildly innovative. The grade-schooler and future Chicago Bears head coach attacked the canvas at various locations, home and away, with a pen in his native Pennsylvania.

Nagy signed his name on the piece of paper once, twice, three times, four … until he ran out of room and had to flip the sheet to continue his artwork.

“I caught my son Tate doing the same thing, practicing his autograph several times, just the other day,” says Nagy, a father of four sons (with wife Stacey) and now a Lake Bluff resident. “I looked at his signatures on his piece of paper, shook my head and told him, ‘Too clean.’ ” 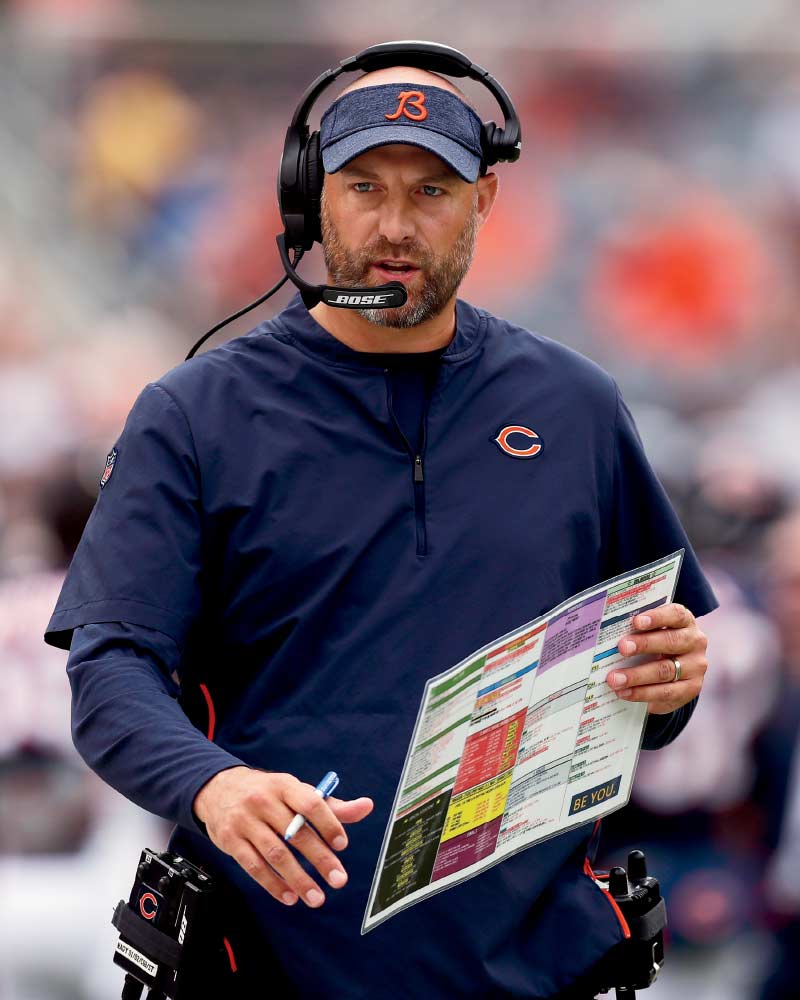 The honor left Nagy a tad embarrassed and disappointed.

“The trophy,” he says, “should have had ‘Coaches of the Year’ on it, not ‘Coach of the Year.’ Two letters; it was missing two letters. My assistant coaches had a lot to do with the season we had, with our success, with our appearance in the playoffs. I’m big on ‘we,’ always have been. It’s all about ‘we.’”

Matt Nagy kicked off his Bears coaching career with a 1-0 record—more than eight months before Chicago’s 2018 season opener in Green Bay. Nagy won, rather handily, his introductory press conference at Halas Hall in Lake Forest. Stacey attended, as did the couple’s Sunday best-dressed boys (Brayden 14; Tate 12; and 10-year-old twins Jaxon and Jett). Nagy, behind a microphone and 39 years old at the time, came across in January 2018 as … Matt Nagy—affable, genuine, engaging, funny, professional, transparent. You meet Nagy for the first time and he makes you feel, almost instantly, like you’ve known him for decades. That’s a gift. He delivers it, often. In any setting.

“I’m a ‘people person,’” Nagy says. “I’ve always been that way. I’ve always been drawn to personalities. I love them all, the personalities of family members, of my friends, of my friends’ parents. My ‘people person’ manner, I got a lot of that from my mom [Gail Stouch, of Lebanon,
Pennsylvania]. She taught me to be myself and to be honest around people, to respect people.” 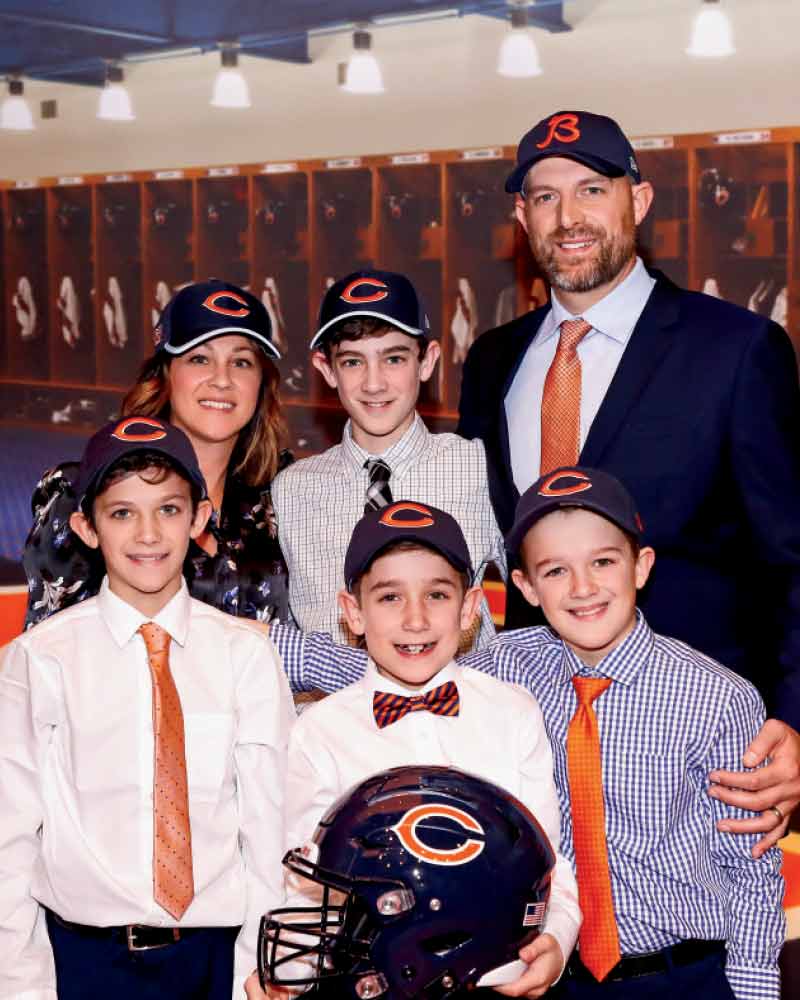 Matt and Stacey Nagy fell in love with the people along the North Shore well before they had unpacked their first box following the move. The City of Broad Shoulders sits south of the Suburbs of Warm Arms, the arms continuing to embrace the Nagy family at every turn. Nagy—a self-dubbed “sports junkie” while growing up in Manheim, Pennsylvania—has wanted to shoot two rounds of golf on the same day at a “cool golf course” for years, a quest that appears to be doable, given the striking links near Lake Michigan.

“The area where we live and work reminds my wife a lot of Wayne, right near Philadelphia, where we lived for a while,” says Nagy, who climbed from Philadelphia Eagles intern in 2008 to Eagles offensive quality control coach in 2011, before beginning a five-year coaching run (quarterbacks coach, followed by offensive coordinator) with the Kansas City Chiefs.

“The shops here are great, the train station, and the people … the people here, I must say, are awesome, super awesome. We love the food, too, and the restaurants, though we haven’t hit them all yet. We also think it’s great how you can get to many places on a bike.”

It takes Nagy 9 to 10 minutes to travel from his Lake Bluff home to Halas Hall. The man is a Bear, entrenched already, his team having become relevant again under his leadership, the conversation at the water cooler on the mornings after Bears games having resurfaced as a popular topic again. The same man was a Baron at Manheim Central High School, a Blue Hen at the University of Delaware and a Dragon, Cobra, Force, and a Destroyer for various stretches in his AFL career.

Matt Nagy, Chicago Bear. Get used to it.

What he enjoys being more than anything else today? A father.

“I am never happier than when I get to watch my sons play sports,” Nagy says. “I’m perfectly content when I’m near right field, sitting alone, watching and cheering. Baseball, basketball, other sports, you name the sport, I want to be there for them. Brayden, I have to brag, is a really good golfer.

“I got some really good advice about being a father from my former colleague [David Culley, now the Baltimore Ravens’ wide receivers coach]. He told me it’s all about your presence as a father, not the presents you give your kids.”