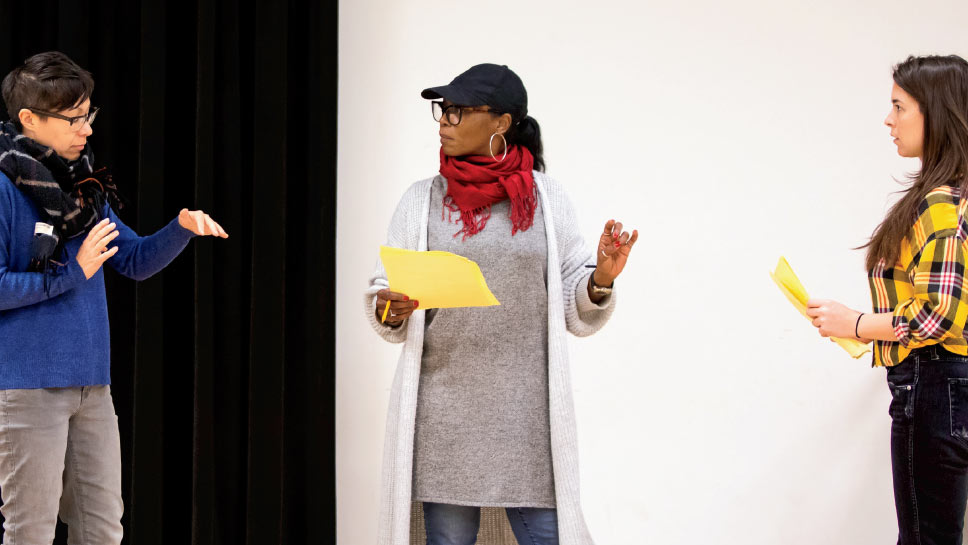 Landladies is the next in a long line of world premieres that makes up the history of Northlight Theatre. PHOTOGRAPHY BY ROBIN SUBAR

From the tender age of 5 years old, Northlight Theatre Artistic Director BJ Jones has always known a good story when he heard one.

“I remember seeing a production of Camelot when I was young and I remember leaving the theater completely energized,” recalls Jones, a two-time Joseph Jefferson Award winning actor and a three time nominated director who is currently celebrating his 20th year at Northlight. “The beauty after being here for so long is that I know the Northlight audience and I know what they will react to. I have sat in the dark with them thousands of times.”

Having directed the world premieres of shows such as Relativity, Stella & Lou, The Outgoing Tide, and Rounding Third, Jones knows the importance of finding new stories to introduce to the Northlight audience. Now in its 44th season, the organization has mounted over 200 productions, including more than 40 world premieres.

And the next one in that long line of world premieres is
Landladies, which will run at the much-loved theatre through April 20. The show features the talents of actresses such as Shanesia Davis playing the role of Marti and Leah Karpel playing the role of Christine.

“It tells the story of two women, a self-made building owner and a single mom, living in Milwaukee and looking to climb the next rung on the ladder both socially and economically,” says Jones of the show written by Sharyn Rothstein and directed by Jess McLeod. “The characters have notes of commonality between them and it’s a very character driven story. And while the storyline on the surface sounds depressing, there is also a lot of heart and humor within the story. It’s a story of a little miracle.”

Jones pauses, and then continues on with his thought.

“Every world premiere is different.” he says. “We are not a factory. It’s not like we make cookies.”

Jones lets out a hearty laugh, but behind the joke speaks an undeniable truth of the philosophies that lay within the core of Northlight Theatre.

“We like to do things that are very topical,” says Jones. “Our recent production of Nina Simone: Four Women has been a very big hit for us. To see how diverse our audience is for this show is amazing to me. Having this newly diverse audience and watching them leap to their feet at the conclusion of our performance … that kind of spirit within these walls is gratifying. That’s why we do it.”

Indeed, welcoming Landladies into the history of Northlight is a highlight for Jones professionally.

“For me, Northlight has always been and still maintains its storefront theatre roots,” Jones explains. “I take great pride in helping to find the next young star and giving life to his or her stories.”

It is also, too, quite a highlight for him personally.

“It’s been such a privilege to live the life I have lived and see shows like these succeed,” Jones says with emotion. “I mean, my father worked as an accountant and my mom was a housewife. To be given the opportunity to do what I do here at Northlight is amazing to me. My life is a miracle and a blessing and I wake up everyday knowing that.”

Northlight Theatre is located at the North Shore Center for the Performing Arts at 9501 Skokie Boulevard in Skokie, 847-673-6300, northlight.org.