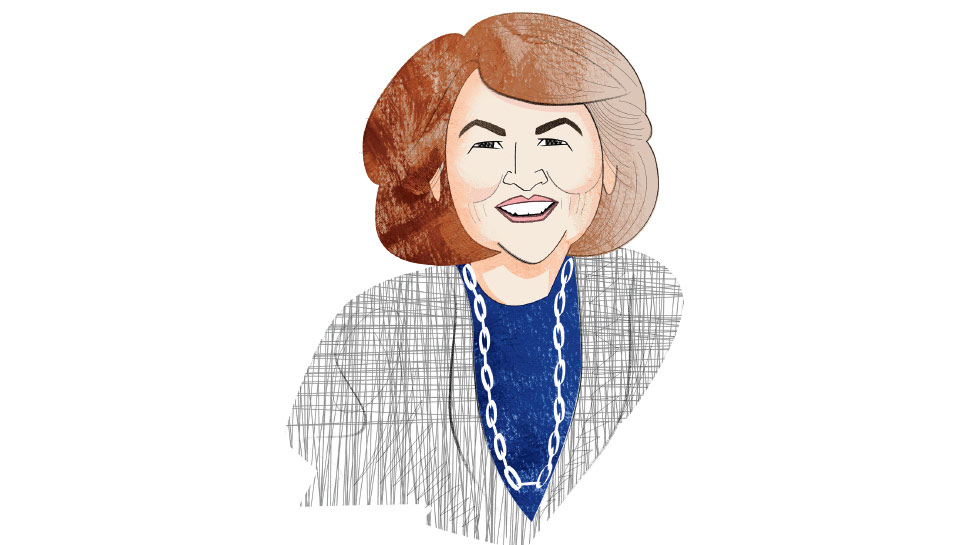 In celebration of the 10th anniversary of the Illinois Holocaust Museum & Education Center, we asked survivor and Board President Fritzie Fritzshall to share her story of perseverance, taking a stand against injustice through the creation of this important institution. ILLUSTRATION BY ROBERT RISKO

Born in Klucharky, Czechoslovakia, Fritzie Fritzshall, was deported by train alongside her family to Auschwitz–Birkenau extermination camp upon the fall of her small village to Nazi soldiers. She was only 13 years old.

There she was separated from her mother and two brothers, who were sent to the gas chambers. Fritzshall herself was in line to enter the chamber when she was removed and forced into a truck that drove her to a nearby slave labor camp.

Toward the end of the war, men and women from camps all over occupied Europe were gathered together into what is now known as the Death March. As they were herded through towns and across roads like cattle, Fritzshall remembers the people who turned away and pulled down their shades, pretending not to see or hear what was happening.

Along with a friend, she escaped, foraging in the forest for whatever they could, until they spotted the Russian army and were liberated. From there, Fritzshall returned home to find the house she was raised in destroyed. She had no money and no food, only the clothes on her back.

Soon she was contacted by her father, who had been living in the United States. He sent letters and American money through the mail to her. Clothes soon arrived from an American restitution organization, and sometimes chewing gum, which Fritzshall had never seen before.

In order to reach America, she had to be smuggled out, first to the Sudetenland then on to Sweden, England, and finally New York and Chicago. Her father’s Armitage Avenue apartment was too small to fit both him and a teenager, so she moved in with her father’s brother, his wife, and their three children in Skokie, sometime around 1947.

And it was there she stayed. So when neo-Nazis threatened to march on her city roughly 30 years later, Fritzshall and her fellow survivors knew they could not stand idly by. They joined forces to found the Holocaust Memorial Foundation of Illinois, open to the public and designed to “combat hate with education.”

This gave way, in 2009, to the Illinois Holocaust Museum, a massive 65,000-square-feet of space, designed by renowned architect Stanley Tigerman, dedicated to remembrance and teaching students, educators, and the community the dangers of prejudice, ignorance, and intolerance through state of the art installations, exhibitions, lectures, and other programming.

“What this museum does every day is teach about the past,” Fritzshall shares. “It is a reminder to stand up for what you believe. To never be a bystander. And to always remember.”

• The Take a Stand Center and Survivor Stories Experience: guests can experience groundbreaking interactive interviews with Holocaust survivors made possible through holographic technology.

• Memory on Unearthed: beginning in September, visitors will get a rare glimpse of the images of the Lodz Ghetto taken by famed photojournalist Henryk Ross.

• One Saturday and one Sunday per month, visitors can take an architectural tour followed by a live survivor talk.

• In celebration of the anniversary, the 10th day of every month will be free for visitors.

• “Our museum has some of the most wonderful volunteers—we have 400-strong, including docents, from all walks of life and all over the area.”

• Weekly cultural programming for the public, including films, authors, and musical performances.

• See what over 500 students per day see during their engaging school field trips.

• You will leave uplifted, feeling part of a community and motivated to take a stand.