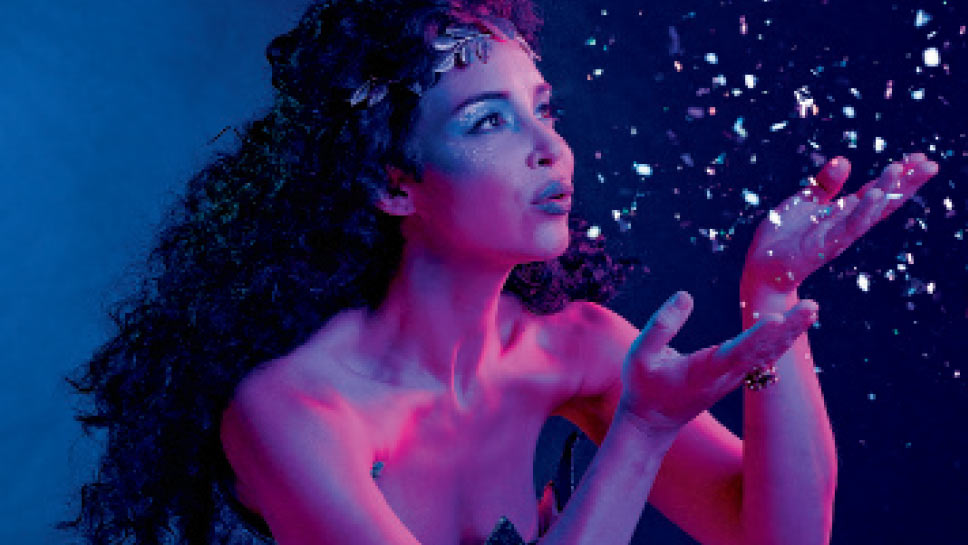 A triple-threat of the stage, sound, and page, Alexandra Silber has roles from Broadway to the West End, a Grammy nod (and live performance), and two published books under her belt. This winter she shines as Titania, the Fairy queen, in Chicago Shakespeare’s riveting new run of
A Midsummer Night’s Dream.

Growing up in the Detroit area, coming to see theater in Chicago was a big part of Alexandra Silber’s life. As an introverted child dealing with her father’s cancer diagnosis, Silber learned that acting was a productive way to work through big feelings.

As a teenager, she played Annie Sullivan in The Miracle Worker, first in Detroit and then at Interlochen, the themes of suffering and healing relating heavily to her own life and father’s battle. “I realized, even at 16, how important approaching acting from an authentic, connected place was, and how powerful the work is when it’s deeply personal.”

Silber’s father passed away when she was only 18. “I never really got to say goodbye, but the theater allows you to breathe life in and experience things in a new way—it creates alternate universes.” This was especially pronounced during her long run as Hodel in Fiddler on the Roof on the West End (she later played Tzeitel in its Tony-nominated Broadway revival)—the impact of that role inspired her book After Anatevka: A Novel Inspired by Fiddler on the Roof, followed by White Hot Grief Parade, a memoir about losing her father.

Many more prestigious roles followed, including Maria in West Side Story. The recording of this presentation, accompanied by the San Francisco Symphony, led to a live performance at the 57th Grammy Awards alongside Cheyenne Jackson and a nomination.

But it was during Silber’s junior year of high school, when she saw A Midsummer Night’s Dream, directed by Joe Dowling, that the stage was set for her current role. This time around, it will be Silber performing the dual role of Titania and Hippolyta in Dowling’s acclaimed interpretation of the Shakespeare classic: “It feels so full circle now, as an adult actor, to be a part of this production.”

Running through January 27, 2019, this reimagining of the production that inaugurated Chicago Shakespeare Theater’s very first season, will weave together original music—a wild blend of styles as varied as jazz and doo-wop—humor, and the visionary staging the theater has become known for.
“This won’t be the typical pastoral scene you’re used to,” explains Silber. “The design and concept of the fairy world is going to be fun, subversive and slightly dark.”

“I’ve always dreamed of being some part of the Chicago theater world—it’s internationally known as a crucible of creativity and innovation. Everything important that’s happening creatively is happening here.”

She adds, “And as a Midwesterner, I’m just excited to come home.”

For production information and ticketing, visit chicagoshakes.com. To learn more about Silber, and to purchase her books, visit alexandrasilber.net.