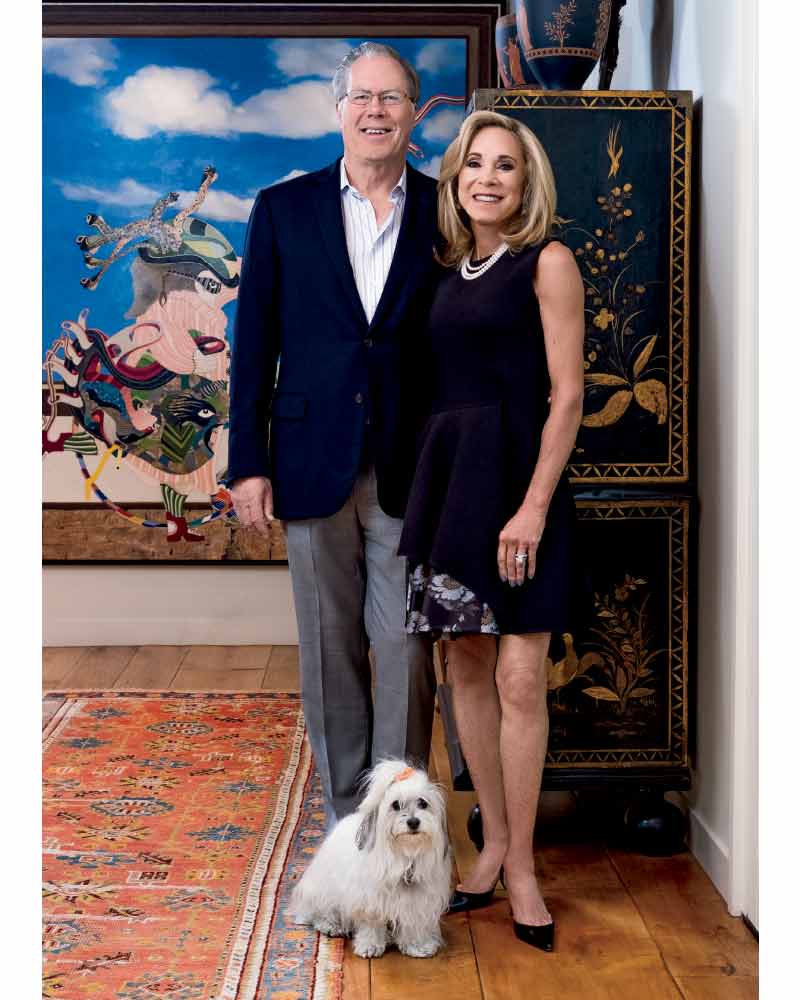 The Japanese term ukiyo-e translates to “paintings of the floating world”—a world where life’s pleasures are savored and enjoyed; a world free of life’s brutalities. The floating world found its concrete expression in the vibrant walled entertainment districts established in every major Japanese city during the peaceful Edo period. Within these districts, the restrictions of a rigid class system were cast aside. As they enjoyed bustling teahouses, theaters, and brothels, the classes mixed while reveling in conspicuous consumption. Over the span of three centuries, these scenes were beautifully captured by ukiyo-e artists.

The Weston Collection owes its origins to a chance encounter. “I first encountered ukiyo-e in 1995 during an exhibit of some of my Japanese lacquer pieces,” Roger Weston recalls. “The display cabinets were full but the walls were bare so ukiyo-e scrolls were hung to dress the space up. I was captivated by the scrolls’ precise yet delicate strokes, their vivid colors, and their sheer artistry.” 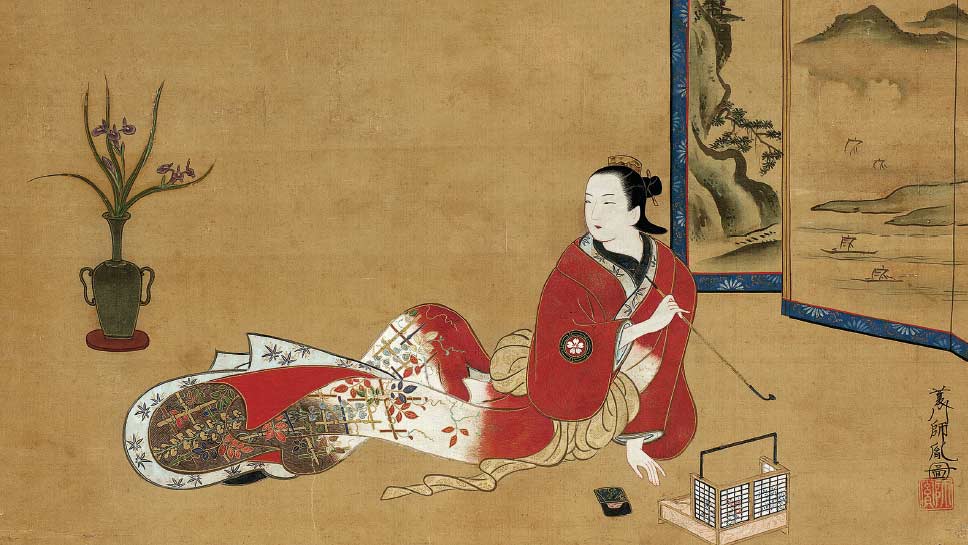 The Weston Collection owes its singular reputation to Roger’s keen appreciation of history and his exacting standards of quality. “I love history so I approach collecting from a historical perspective. When viewing this exhibit, you will be able to see the ukiyo-e movement from its very beginning to its very end,” Roger explains. “The way Roger goes about collecting reflects his love of learning. He wants to understand an entire genre and then tell the whole story as a teaching tool,” observes Janice Katz, the Roger L. Weston Associate Curator of Japanese Art at the Art Institute of Chicago. As the ukiyo-e movement began in the 17th century and spanned over 260 years, pieces often suffered the ravages of time. “I only acquire paintings in excellent or very good condition because it is these pieces that best communicate the artists’ skills to the viewer,” Roger says. He was thrilled to recently discover an ukiyo-e treasure that had been lost for nearly 80 years. Last seen at a 1936 Tokyo auction and formerly owned by a 19th century Japanese baron, Ryukyuan People Dancing and Playing Musical Instruments captures a lighthearted moment. As ukiyo-e paintings most often depicted glittering cosmopolitan scenes, this painting’s depiction of life on the Ryukyu Islands, now known as Okinawa, make it especially important.

The hallmark of the Weston Collection is its bijinga or paintings on paper or silk of beautiful women. The women’s elaborate hairstyles, often secured with delicate tortoiseshell pins and combs, illustrate the evolution of fashion and beauty ideals over the centuries. These tonsorial secrets are uncovered for museum visitors in a movie specifically commissioned for the exhibit. “The movie showcases the talents of a ninety-year-old woman, who is one of the last remaining masters of traditional hairstyling for the geisha community,” Katz describes. “She recreates three hair styles depicted in the exhibit’s paintings using a modern-day geisha as her subject.”

A spectacular example of bijinga is 100 Women, which visitors will find in Room Five of the exhibit. While its twenty-four frames depict women of all social classes, the most intriguing frames reveal the intimate moments of Japanese courtesans. In one frame, a courtesan grimaces as she removes a tattoo from her arm while the women around her read, prepare tea, and wash away the last traces of elaborate makeup. “Utagawa Toyokuni I, the artist, has conceived very complex, very vivid scenes of Edo-period life,” observes Katz. “Seeing these women with their elaborate hair styles and breathtaking fashions in these incredibly detailed settings brings this long ago world to life.”

Some of the exhibit’s ukiyo-e paintings are graced with lines of calligraphy; delicate lines that cascade down like a shower of cherry blossoms. Recent generations could only appreciate the calligraphy for its technical beauty because the meaning of the text had been lost. Now, as a result of painstaking research by the scholarly team behind the Painting the Floating World exhibit, the layered poetic meanings within the calligraphy have been unveiled.

“Our main goal was to illuminate these passages as best we could. We didn’t want any part of these paintings to be hidden from our viewers,” Katz remarks. Yet, as Katz elaborates “translating and transcribing inscriptions of this age, especially with their word play, is a task only a handful of people are up to undertaking. Thankfully, Mami Hatayama, the Weston Collection’s curator, along with another scholar based in London took on the task of making sure the bulk of inscriptions were translated. It really was an enormous task. These scholars had to put themselves into the mindsets of poets in Edo-period Japan who were creating these verses, often as inside jokes, for their literary-minded friends.” 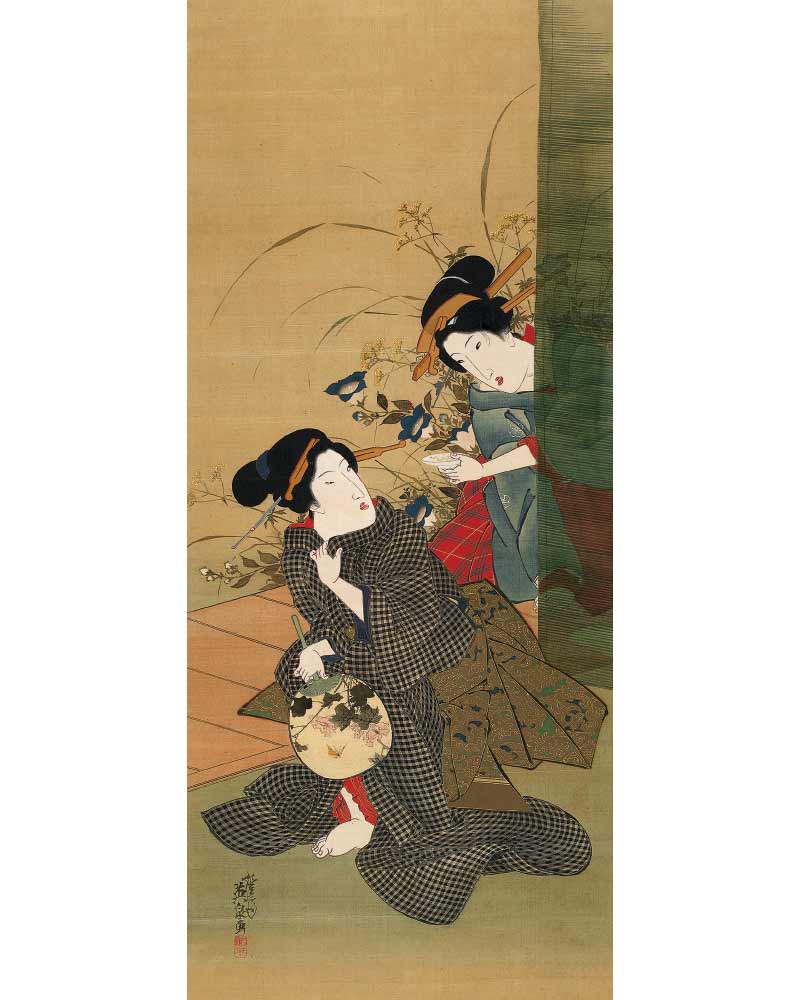 In the past, when pressed to select favorites among his collection, Roger had always deferred saying he “could not choose because they are like my children.” In celebration of the exhibit’s opening, Roger has chosen to share his three favorites with Sheridan Road readers. At first glance, the three favorites seem more dissimilar than similar. Woman Arranging Her Hair by Nishikawa Sukenobu depicts a woman enjoying a solitary moment as she dreamily brushes her hair at day’s end while Two Women and Autumn Plants by Keisai Eisen captures the playful interaction between two friends. The vertical planes of the prior two paintings contrast sharply with the strong horizontal lines of Seated Woman Enjoying A Pipe by Hishikawa Morotane. All three paintings, however, are remarkable for their ability to create a connection with the viewer. A connection Roger describes “as making you feel as if you were just a few feet away, rather than centuries removed.” A connection worthy of a favorite.

These favorites and more can be found in an exhibition that unfolds chronologically across eight rooms in the Art Institute’s Regenstein Hall. The location is especially fitting as Roger and his wife, Pamela, are deeply connected to the Art Institute; a connection fostered during their childhoods. Roger visited the museum’s galleries regularly as a child with his mother, an art teacher and member of the North Shore Art League. As the eleven-year-old winner of an Art Institute contest, Pamela was able to paint her own paintings as she sat in the museum’s storied Impressionist rooms. Both have assumed important leadership roles within the museum: Roger as Chair of the Committee on Asian Art; Pamela as Chair of the Sustaining Fellows Program Committee. As benefactors of the Roger L. and Pamela Weston Wing and Japanese Art Galleries, the couple have had a major impact on the experiences of both the Art Institute’s visitors and its members. “As major supporters of Japanese art, Pam and I have been honored to further the Art Institute’s goal to increase Western exposure to Asian art,” Roger reflects. “Broadening understanding of Japanese art and creating an appreciation of its complex layers gives purpose to my collection.”