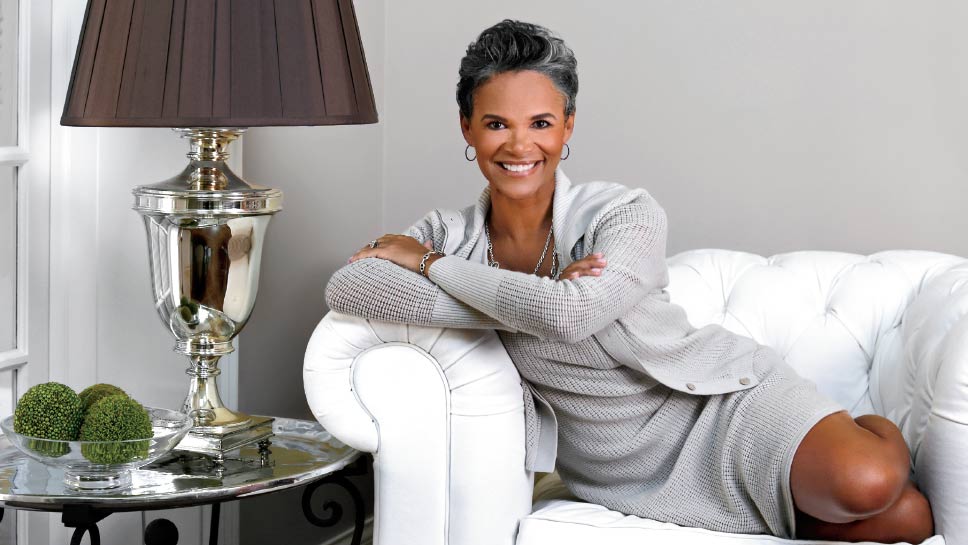 The idea for Feel Good Undies, as many very good ideas do, came quite naturally. Twenty-six year Lake Forest resident and company founder Cheryl Mankoff, a recent breast cancer survivor, wanted to give good back. Volunteering at the Coachella Valley Rescue Mission near her winter home in Palm Desert, California, Mankoff was following director Darla Burkett on a tour through the mission.

“We came to the donation room which was full of jackets and blankets, hats and mattresses—the typical things you’d see donated,” recalls Mankoff. “And next to that room, was the laundry facility where there happened to be a woman and her child who were washing a load of intimates. At that moment—and I don’t quite know what made me ask, I turned to the director and said, ‘You have all of these amazing donations, what is the one item that you really need most?’ And the director said just one word: ‘Underwear.’”

“It makes sense when you think about it,” says Mankoff. “People donate all kinds of gently used clothing and material goods and furniture to the needy, but hardly anyone wants to—or thinks to donate intimate apparel.”

While most people might have filed this information away, and eventually forgotten about it, Mankoff couldn’t stop thinking about the need. “I just kept turning that statement over in my mind,” she says. “So, when I got up the next morning, I decided to call around to shelters and ask the same question: ‘What’s the one item you need the most?’”

Calls to shelters in Chicago, Los Angeles, and New York confirmed that she was on to something. “It wasn’t just California—it was nationwide. Directors at every single one of those shelters said the same thing: ‘The item we need the most is underwear,’” she recalls.

“So, I decided to do something about it.”

That something is Feel Good Undies, the only e-commerce intimate apparel company in the United States that donates one pair of gorgeous, high-end underwear to shelters for every customer pair purchased.

Launched in November 2017, the company has already donated 1,000 pairs of underwear to the Coachella Valley Rescue Mission in Indio, California, and has goals to eventually donate to every homeless shelter from coast to coast.

That’s no small task, Mankoff allows, as there are tens of thousands of shelters across the country—3,000 in the city of Chicago alone.

“I get calls from shelters every day,” says Mankoff, “More than 200 have already asked me to please consider donating Feel Good Undies. So, I just keep adding them to the queue.”

Meetings with the mayor’s office in Los Angeles opened doors for Mankoff to work with a nonprofit there that specializes in warehousing and distribution of donated items. She plans to pay that forward, meeting with the powers that be in as many U.S. cities as she can.

Each pair comes packaged in a beautiful box with the trademarked orange “Feel Good … Do Good” smile, and, a thank you card highlighting the shelter that benefitted from the consumer’s purchase. The smile could be Mankoff’s own. A former model with the Diane Johnson Agency, Mankoff’s smile brightened runways, commercial print ads, billboards, and editorial pages for decades. She was also Oprah Winfrey’s number one petite-sized model, for Winfrey’s fashion shows. But in fact, the smile was born out of a visit Mankoff had with a shelter resident.

“A really nice gentleman—and I mean a gentle man, shared his feelings about being on the streets. He wanted people to understand that when you see someone like him on the streets, a simple smile and acknowledgement means more than anything. A genuine smile from someone makes him feel that he has a little self-worth for that moment! So that is why I have the big orange smile on my logo.”

Designing the underwear, Mankoff says she sought and bought every variety she could find that had some design detail, fabric, structure or make that she liked, and then worked with her manufacturer.

“I’d say, I like this element of this pair, and that of another pair, and then we incorporated all of the best elements to come up with our product line.”

Fashioned from Micro Modal, a bamboo fiber fabric that becomes softer with each wash, the underwear has a no-roll waistband and comes in a solid black color. (Additional colors and possibly prints, may come soon.)

“My son Ian, a Division 1 golfer was my test model,” Mankoff laughs. “He wore them carrying his golf bag for 36 holes in 100 degree heat. And he said they were the most comfortable underwear he’d ever put on.”

Because they are so well suited for active wear, Mankoff will be marketing Feel Good Undies at the Conway Golf Club and other country clubs on the North Shore and is open to the idea of selling through boutiques and on college campuses. “But my main focus, because I want to reach as many people as possible in order to get as many pairs of underwear as possible to the shelters, is e-commerce,” she reiterates.

Because she must run her business at very close tolerances in order to keep the buy-one-give-one model stable, Mankoff is exploring some creative marketing methods. She has already developed relationships with student ambassadors at the University of Chicago, Harvard, Northwestern, UCLA, USC, University of Wisconsin, and Washington University, and is establishing more planned partnerships with schools. She’s also looking at the possibility of sponsorships with celebrities who have been homeless at one point in their lives but are now successful.

“The response I have from my customers when I see them out and about is just simply the best! It is not unusual for someone to show me their orange smile and tell me how they are feeling good and want to share their smile. Or they will ask me with a huge smile, ‘Are you feeling good, because I’m feeling good!’ My mission is to make a meaningful difference for the dignity of the needy across the country by finding a way to make it easy for people to simply give back and Feel Good … Do Good!”