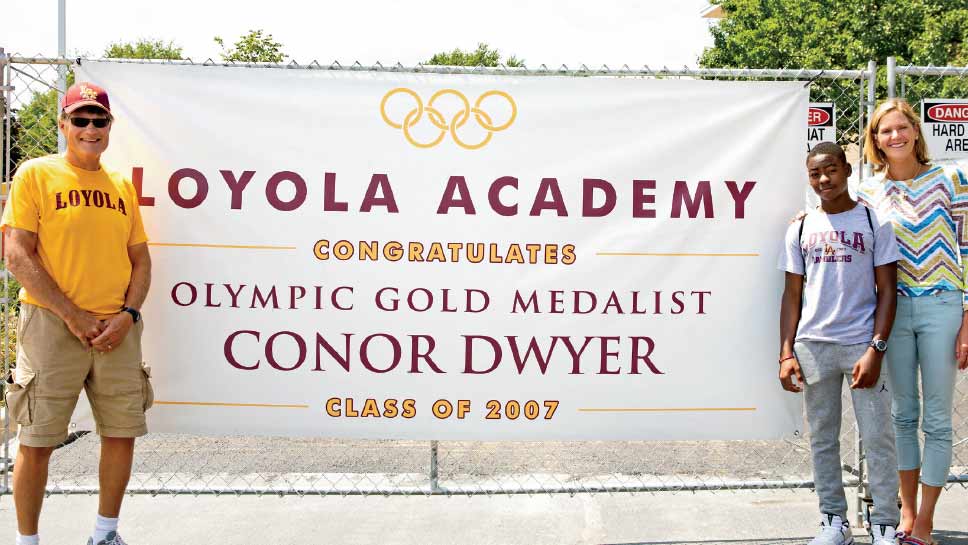 Like countless young people in the world today, Malik Aro never learned how to swim as a child. Originally from Nigeria, the water was a scary place for the young man, who was able to attend Loyola Academy thanks to the school’s Tuition Assistance Endowment program.

When he was a freshman at the renowned school, Aro was enrolled in a Learn to Swim class and was making great strides until one fateful day, when his attempt to go to the deep end of the pool resulted in him having to be rescued by his teacher and coach Stanley Breitzman.

And yes, that’s the moment when he could have quit.

But much like his fellow classmates, Aro continued on. And thanks to the encouragement from Loyola O’Shaughnessy Program teacher Joan Dowdle, Aro did get back into the water and ultimately took swim lessons with Dowdle’s cousin Jeanne Dwyer, the mother of Loyola alum and Olympian swimmer Conor Dwyer. And now, as he prepares to enter his sophomore year at the school, Aro is loving the water more than ever before.

“This is the perfect example and a true symbol of just what our students are made of,” explains executive vice president at Loyola Academy Dennis Stonequist. “These phenomenal kids are always striving to better themselves in every way possible, and we support them in that effort by always dedicating ourselves to educating the whole person.”

Loyola’s Tuition Assistance program benefits nearly 24% of the school’s approximately 2,000 students, awarding nearly 3.9 million dollars per year. And it is these students along with the rest of the enterprising student body who always have a way of looking toward the future of their school, a future that will now include a completely brand-new pool facility. The John D. Norcross ’54 Aquatic Center, set for completion in fall of 2019, will include a 40-yard stretch pool with a moveable bulkhead perfect for swimmers of all skill levels.

The aquatic center will be dedicated to the memory of former swimming, diving, and water polo team member John D. Norcross, who left a multimillion dollar estate gift to the school to complete the project after his passing in 2014.

“There has been an air of pep in everyone’s steps around here lately,” says Stonequist. “It really is quite a moment in time for all of us. There is such a pride for every student when it comes to watching this project come to fruition. From the drum line to the honor students, everyone finds themselves in that pool at one time or another.”

With the completion time for the new facility still over a year away, the students at Loyola will utilize a number of area pools including the YMCA in Evanston and Our Lady of Perpetual Help in Glenview.

“A lot of very nice people have stepped up to help us and once the center is completed, we can’t wait to throw a community-wide celebration for everyone to enjoy,” he says

And as much as he looks forward to the new facility, Stonequist says that the memory of the prior pool will long live on.

“I spent four years swimming in that pool as a student and thirteen years coaching in that pool,” he says quietly. “And all the kids who learned to swim in that pool and who faced some of their greatest fears… well, it’s overwhelming to think about to say the least.”

For more information about Loyola Academy, call 847-256-1100 or visit goramblers.org.