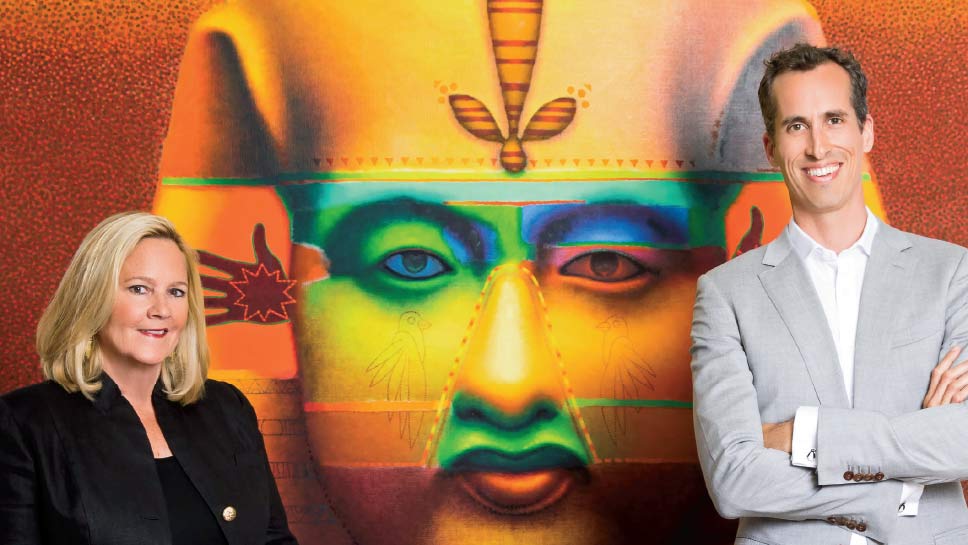 There’s an art to the practice of a craft and in the cutthroat world of professional auctioneering, Leslie Hindman Auctioneers founder Leslie Hindman is the master. She found her start under Catharine Hamilton when Sotheby’s opened its first United States branch office in Chicago in 1978. “I’ve been around awhile,” jokes Hindman.

A few years later, in 1982, Hindman would launch her namesake brand, now globally recognized, and then reopen Leslie Hindman Auctioneers in 2003 after being sold to Sotheby’s in 1997. It has since become the largest fine art auction house in the Midwest and one of the largest in the country with seven offices nationwide (Atlanta, Denver, Milwaukee, Naples, Palm Beach, Scottsdale, and St. Louis) in addition to Chicago.

So, it stands to reason that Hindman announced the appointment of Thomas Galbraith as CEO this June (Hindman will continue to serve as chair of the board) following a private equity investment that positions the firm for aggressive growth in the coming years.

“Leslie has built an incredible team here with talented people who are passionate about their field of expertise and who are thoughtful client service professionals,” says Galbraith. “Very occasionally in life, one is lucky enough to be presented with an opportunity that, while risky, has the potential to rewrite the playbook. I’m so excited about bringing these talents to a larger audience through growth online and off, regionally and through market expansion. We want to be the largest local auction house.” 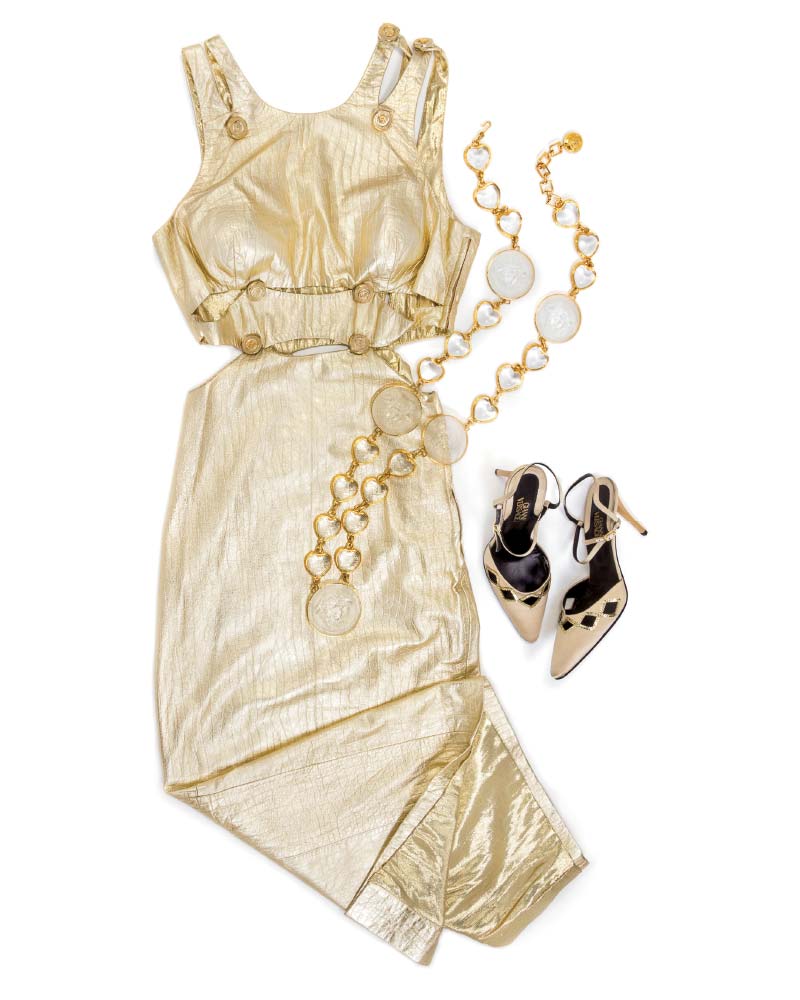 Highlights from The Genius of Gianni Versace: A Collection of His Iconic 90’s Designs. Auction Friday September 21.

The hope is that Leslie Hindman Auctioneers will continue to expand into new markets and categories. Currently, jewelry, contemporary art and prints, and drawings are their largest departments. They plan to further expand coins, modern design, contemporary glass, and other departments, as well as offer more online-only avenues for beginning collectors and curated sales.

“Technology is the future in all industries,” explains Hindman. “We’ve been moving toward more online-only auctions for a long time now, and Thomas brings a great depth of knowledge in this area. His consulting firm [The Petraeus Group] has provided growth and start-up strategies to numerous innovators in our industry. Thomas was managing director of Paddle8 and prior to that, director of global strategy for Artnet. He was also interim CEO of Twyla, a Google Ventures-backed start-up.”

Under his leadership, the firm seeks accelerated growth and innovative ideas, much like the many they’ve already implemented. The firm is a founding partner of Bidsquare, a live auction platform formed by six leading auction houses, and also owns a proprietary online bidding platform, LHLive, in addition to LHExchange, an e-commerce site specializing in high-end designer furniture and decorative arts.

But in addition to growing their online presence, the firm will also be opening in a number of new markets. “It’s probably best not to tip our hat, but we’re considering Texas as an initial option, as well as other Florida and Midwestern locations,” shares Hindman. 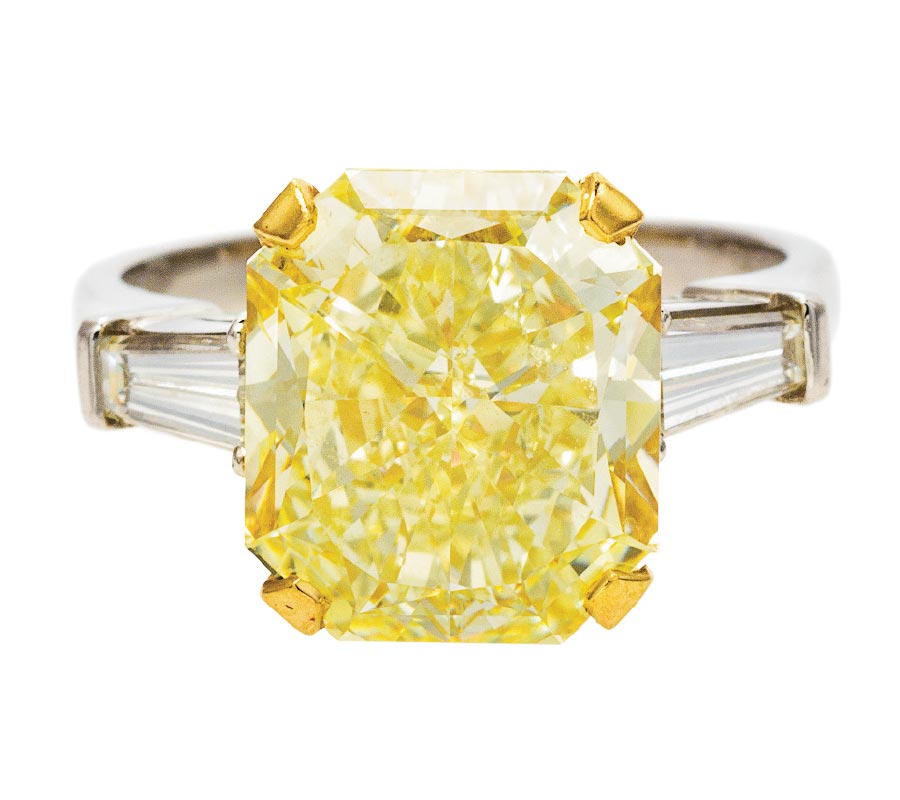 A fancy yellow diamond and diamond Graff ring sold for $161,000

First, though, they’ll be selling a comprehensive collection of 1990s Versace this fall. “It recently arrived in Chicago and is fabulous,” says Hindman. “There are over 350 items, many from the Versace runway and ad campaigns, of which very few were produced. The collection is from the early ‘90s when the design house was still operating as Gianni Versace before his death in 1997. It’s incredibly special and over-the-top, not something to miss!”

So how does one get their hands on a piece of this collection, or on a piece in one of the 60+ auctions the firm handles annually? Hindman tells buyers to set a top price above which they will not bid. “It’s important not to get carried away with the bidding, whether you are bidding online or in the auction room,” says Hindman. “And it is very hard to do. We’re all competitive by nature.”

Hindman has conducted many high profile auctions, including sales of memorabilia from the historic Comiskey Park and Chicago Stadium; property from the Caribou Ranch and Recording Studio; and the personal property from renowned estates as Arthur Rubloff, Mrs. Robert R. McCormick, the Potter Palmer families, and Dole heiress Elizabeth F. Cheney. For Hindman, it’s the single-owner auctions that are most rewarding insofar as marketing a collection that someone has lovingly built over their lifetime.

“There are tons of fun and exciting stories but since opening in Palm Beach, we’ve been privileged to handle some pretty iconic collections connected to the history of the island,” says Hindman. “One of our first single-owner auctions in Palm Beach was property from the estate of Lilly Pulitzer. Both the collection and those who traveled nationwide for the exhibition and auction were characteristically ‘Lilly.’ It was a great splash into a new market but also a special tribute to such a wonderful life.”

Hindman also likes history so she’s fascinated by the firm’s books and manuscripts department, specifically recalling a pre-fire map of Chicago printed in 1857 that sold last year and a recently handled collection of over 400 manuscripts from figures such as George Gershwin, Pyotr Ilyich Tchaikovsky, Joseph Stalin, Benjamin Franklin, and George Washington.

“Last year, we hired Gretchen Hause, who recently reunited with Francis Wahlgren since he joined our firm as an executive consultant,” says Hindman. “They worked together at Christie’s for seven years, and Francis has been in the books industry for over 20. I’m excited to watch that department grow!”

Next up for Hindman, though, is travel. “I love to travel and always have,” she says. “I’m excited to have a bit more time to travel now and have trips planned this summer to France, Southampton, Alaska, and Italy.” As one would expect, each destination is known for its rich cultural history. Alas, there’s no rest for the master.