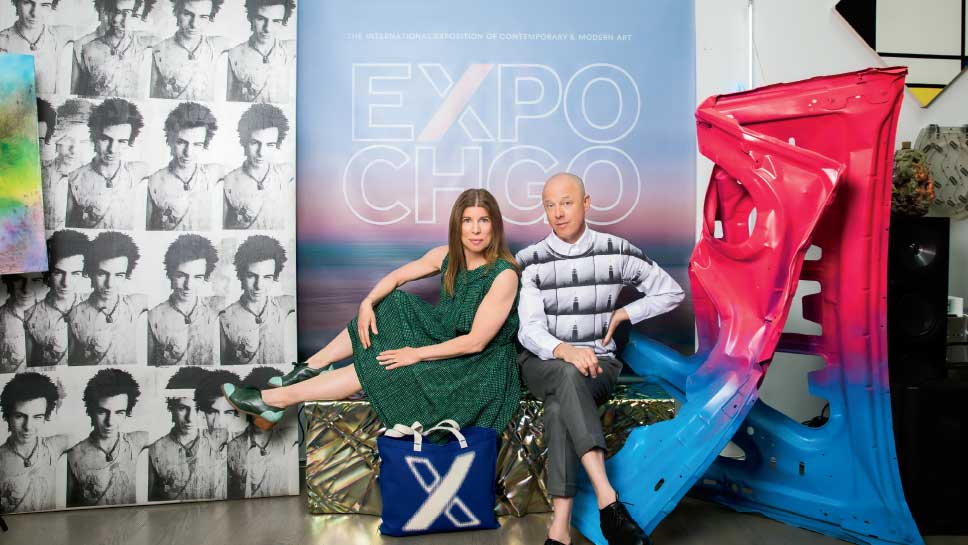 For four days each September, Chicago is immersed in a different kind of “Bright Lights, Big City” hustle and bustle, when the art world and The International Exposition of Contemporary and Modern Art, EXPO CHICAGO, takes command at Navy Pier. The buzz is hard to escape as buses and billboards fill the streets and skyline with promotional signage. Collectors may breeze in and out of town, yet the behind-the-scenes work that has put this show, now celebrating its seventh anniversary, on the map, continues all year long. Local businesses like JNL Graphic Design and its proprietors Jason Pickleman and Leslie Bodenstein, work closely with Tony Karman, President and Director of EXPO CHICAGO, to attract a worldwide audience of connoisseurs, as well as galleries, such as Lévy Gorvy of New York and London, to the renowned fair. Here, these top players in the field, share a sneak peak of the planning, preparation, and place, that make EXPO CHICAGO a top contender in the art marketplace.

JNL Graphic Design was started in 1992 and has been in its current location, a de-commissioned post office in Chicago’s River North neighborhood, for the past 18 years. The studio is run by husband and wife team, Pickleman and Bodenstein, who marry their passion for artwork from their personal collection alongside that of commercial projects. “I think this is one of the reasons our clients come to us,” says Pickleman. “Our packaging for Skinny Pop, for example, took its bold typographic cues from Andy Warhol’s Brillo Boxes.” The studio has an extensive roster that includes a coffee table book for the Field Museum celebrating its 125th anniversary; a fall events guide for the Poetry Foundation; a book for the Prada Foundation in Milan with the artwork of Theaster Gates; and, a 400-page book for the Chicago Transportation Authority highlighting all of the public artwork within the train stations throughout the city. In his spare time, Pickleman runs Lawrence & Clark, a collection-based gallery (open on Saturdays and by appointment) located at the intersection of those two streets, that he describes as “an experiment to see what the art I had collected could do outside of my home and office.” Some works may or may not be for sale, depending on the day and Pickleman’s mood. And, while the experience has helped this self-described impulsive collector make connections that he might not have otherwise noticed, it has widened his perspective “to the courage that artists have to let their works go out into the world.” Something the duo diligently safeguard in their facilitation of displays at EXPO CHICAGO. 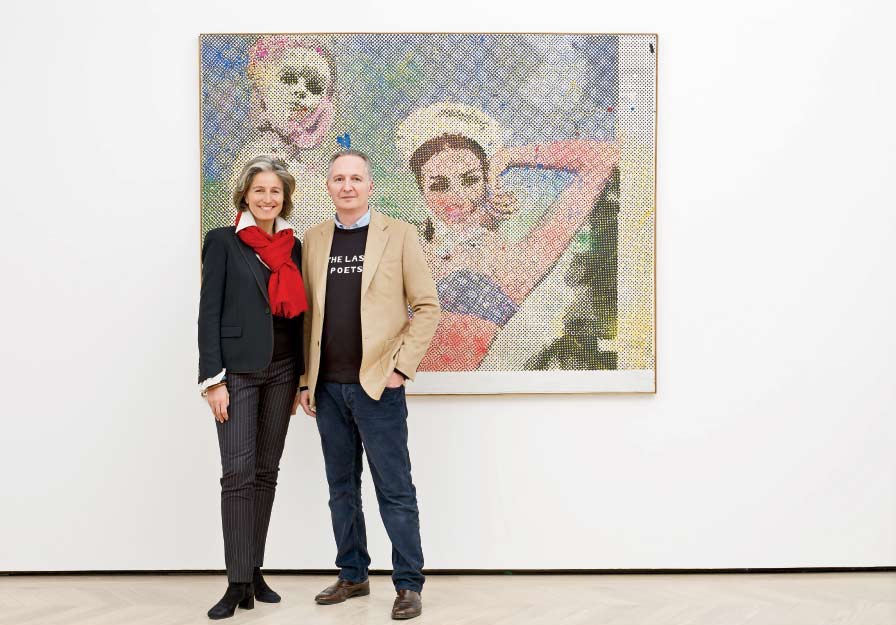 How did the relationship between EXPO CHICAGO and JNL begin?

Pickleman and Bodenstein: Our relationship with EXPO CHICAGO started at the very beginning; Tony Karman knew of our previous work on Chicago art fairs throughout the ‘90s. Back in 1993, there were three competing contemporary art fairs, all happening at the same time. Art Chicago was the clear standout, and our design work (a silhouetted figure as seen from the back looking into a sea of yellow) for that fair has become iconic. So, when Karman decided to re-invent the Chicago exposition, our studio was a natural fit.

What is your experience with Chicago collectors?

Pickleman: There are many levels; I know collectors that spend millions, and I know collectors that spend pocket change to bolster their art buying pursuits. Chicago is a great city to discover artists within the very early stretch of their careers. Sterling Ruby and Rashid Johnson are two artists whose work I purchased during their first gallery shows. Collectors in Chicago, in general, are SO generous. They open their homes and offices for tours and events all the time. I was just at a collector’s loft and we ended up dancing between a Baselitz and a Gottlieb!

What is the creative EXPO CHICAGO process and how has it evolved?

Pickleman: Almost immediately after one exposition ends, Tony Karman and I are already talking about the visuals and positioning of the next year’s edition! Early in the run of the show, we featured the vaulted ceiling of Navy Pier. There are few spaces in Chicago that match that sense of extended space. After that, we drew inspiration from local artists: Kerry James Marshall, Judy Ledgerwood, Tony Tassett and Nick Cave gave us free rein to photograph their working studios, and those images became the basis for two years worth of identity work. After that, Tony and I started to again think about space. Instead of the interiority of the artist studio, we thought about the great expanse of space that frames Navy Pier: namely, Lake Michigan. Lincoln Schatz is an artist I’ve known for over 30 years (Leslie grew up with Lincoln in the same Mies Van der Rohe building beginning way back in 1969!). I would see him every morning on the lakefront taking photos of the water’s horizon line, where the water meets the sky. He takes a photo every day; always the same composition. I thought this was such a great metaphor for our EXPO CHICAGO. 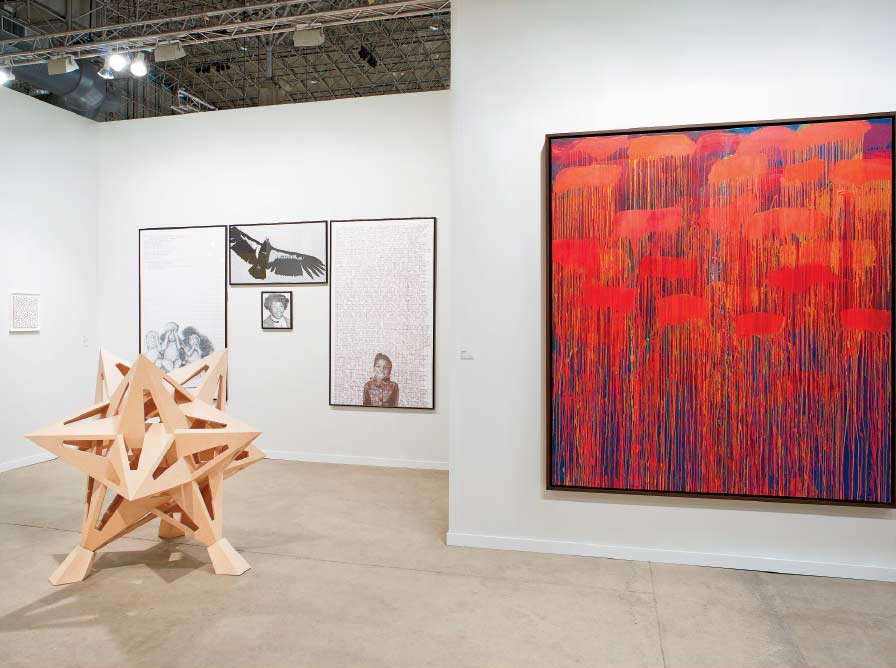 “The Exposition continues to grow, not in size but in stature,” says Karman, “truly shaping the future of EXPO CHICAGO and our local, regional and global impact.” That reach now includes two additional high-profile names, Gavin Brown’s enterprise and Lévy Gorvy, the latter run by Dominique Lévy and Brett Gorvy, both former colleagues at Christie’s Auction House, where prior to the partnership Gorvy was Chairman and International Head of Post-War and Contemporary Art. A former journalist, Gorvy has developed a new following on Instagram (@brettgorvy) with his daily poetic posts linking artworks to words. As with art fairs, social media provides a detour from the traditional brick-and-mortar constraints for displaying art. It is that outside of the box spirit, noted in a previous collaboration with DePaul Art Museum for a performance of Senga Nengudi’s “R.S.V.P.” Activation, that Lévy Gorvy embraces and where Chicago has proven a welcoming venue.

Gorvy: Chicago has a very personal significance for me—as the hometown to my wife’s (art advisor Amy Gold) family, we visit often and have an apartment here. 2017 was the first year Lévy Gorvy participated in the Fair, and we were thrilled by the reception that we received from collectors, curators, and a very enthusiastic public. In particular, we were happy that works by Pat Steir, Carol Rama, Senga Nengudi, and Dan Colen found new homes in the Midwest.

What sets the Chicago art scene apart from others?

Gorvy: The city historically has been such an important place for forward-thinking collectors with ties to museums in the region. We are there to reconnect with the older collectors, and also to inspire a new generation—and we look forward to our return this year. It is a true privilege for Lévy Gorvy to participate in EXPO CHICAGO.

Buy what you love, not for investment?

I agree with that sentiment. If an artwork speaks to you and moves you, you’ll know…the interaction is, and should be taken, as no different than a feeling with any other important relationship or important decision. With that in mind, I recommend that you connect with the gallerists to learn about the artist, their story and the genesis of a work of art. Learning and discovering is the best part. That’s the true investment.

What’s the best way to navigate EXPO CHICAGO or any art fair, for that matter?

When you arrive at an art fair, it can be a lot to take in. You’ll receive a map, outlining aisles and aisles of incredible galleries. Don’t feel like you have to see it all…zoom in on what attracts your eye, regardless of price. It’s not about quantity, it’s about quality, and EXPO CHICAGO especially is full of galleries with thoughtfully presented booths. 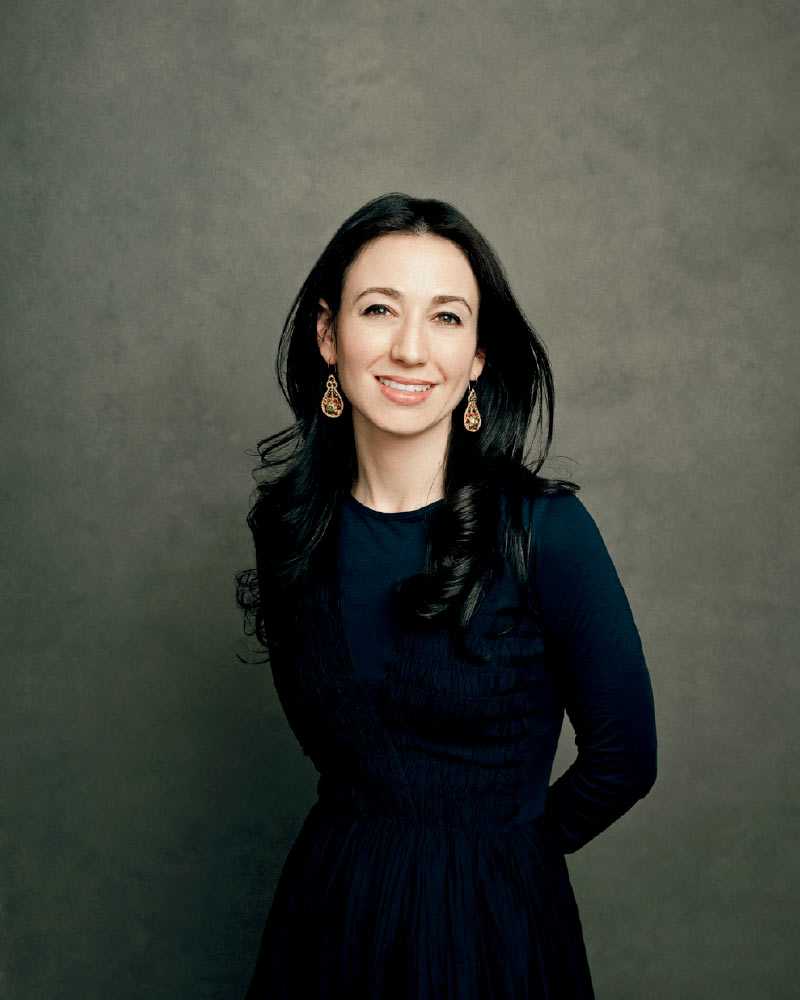 There are many reasons! For one, unlike many fairs, EXPO CHICAGO is manageable and digestible—you can do a full lap in the morning, and then take the time and return to works that caught your eye later in the day. Chicago has always been a hub for visionary collectors and the next generation of collectors we meet at EXPO CHICAGO has that same spirit, they are engaged and keen to learn. Lévy Gorvy has had a really positive experience presenting primary artists in Chicago and sharing their work and stories. Taste levels are high, and the energy is very enjoyable.

Opening night Vernissage is lots of fun to see and be seen, but quieter moments on the second or third day of the fair often allow for more time to converse in the booth with the gallerists—that is why we are all there so definitely don’t be shy and make the effort to ask questions. Do be sure to visit Lévy Gorvy’s booth—we love fairs for the opportunity to open new dialogues with new audiences.