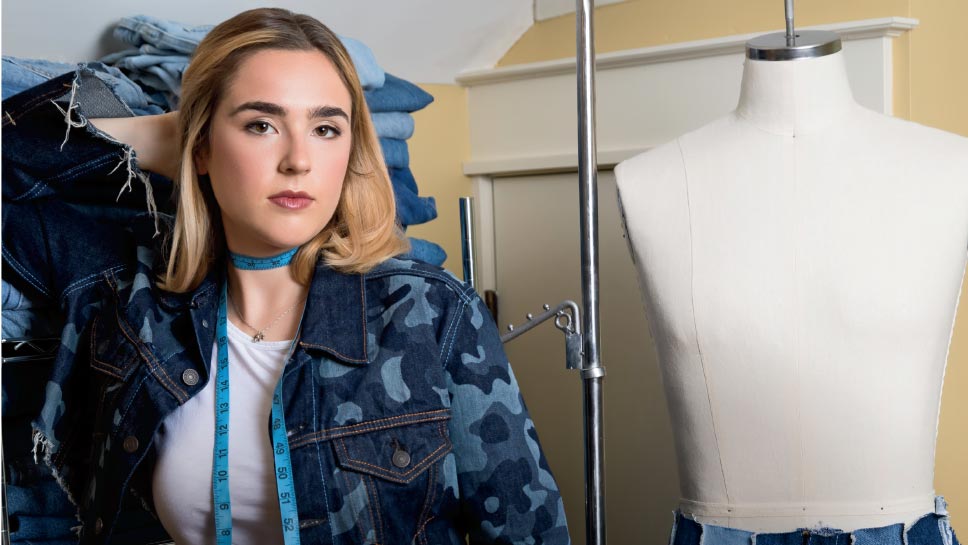 Navigating our current political moment is something many people grapple with every day. Some have become more politically active by knocking on doors and volunteering for campaigns while others use social media platforms to organize activism, or merely shout into the void. Artist and designer Gabriella Meyer is taking a different approach to this dilemma: designing clothes.

Denimcratic is a line of custom casual-wear from puff coats and boleros to hats and bikinis. The unifying thread is that Meyer crafts every piece from re-purposed denim creating unconventional forms that fly in the face of normalcy while celebrating and encouraging the desire to be seen and heard.

This young designer’s vision evolved from her early ventures in political cartooning for her college newspaper The Daily, as well as her education in interdisciplinary art at the University of Michigan. She studied animation and fiber art and began making clothes in her studio for immersive art installations. Even though her professors criticized her work for being “more fashion than art,” friends and peers started wearing the pieces and she thought “maybe I’ve got something here.” 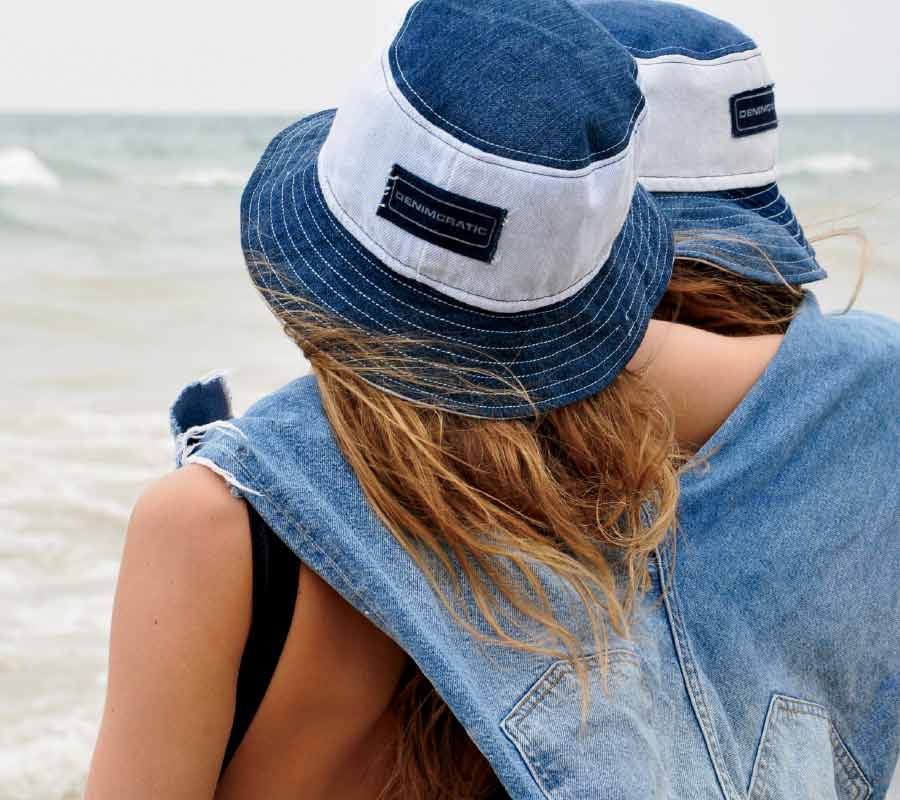 She began collecting cast-off denim, wanting to spotlight sustainability in fashion while also considering the material as one with a strong cultural history in the democratization of fashion. Looking at the blue-collar workers of early American industries and how their utilitarian garb evolved into something stylish and comfortable has been a big influence on Meyer’s designs: “What I’ve wanted since the beginning is to utilize recycled material not only for the environmental impact but to be able to add a storytelling component. These are jeans that someone used to wear, they’ve given them away because they no longer have use for them, and I’m turning it into something entirely different and making it desirable.”

Meyer’s designs are transformative. Denim fabrics span every shade of blue, and her pieces often utilize that full range to create bold, eye-catching patterns and gradients from light to dark. But Meyer’s imagination doesn’t stop at patterns. True to the philosophy of fashion being democratized, the unique custom cuts are for the most part gender neutral and available for all body types. Early campaign images show models of all shapes, sizes, and colors, unified by these playful norm-challenging articles like a uniform worn by members of a postmodern revolution. 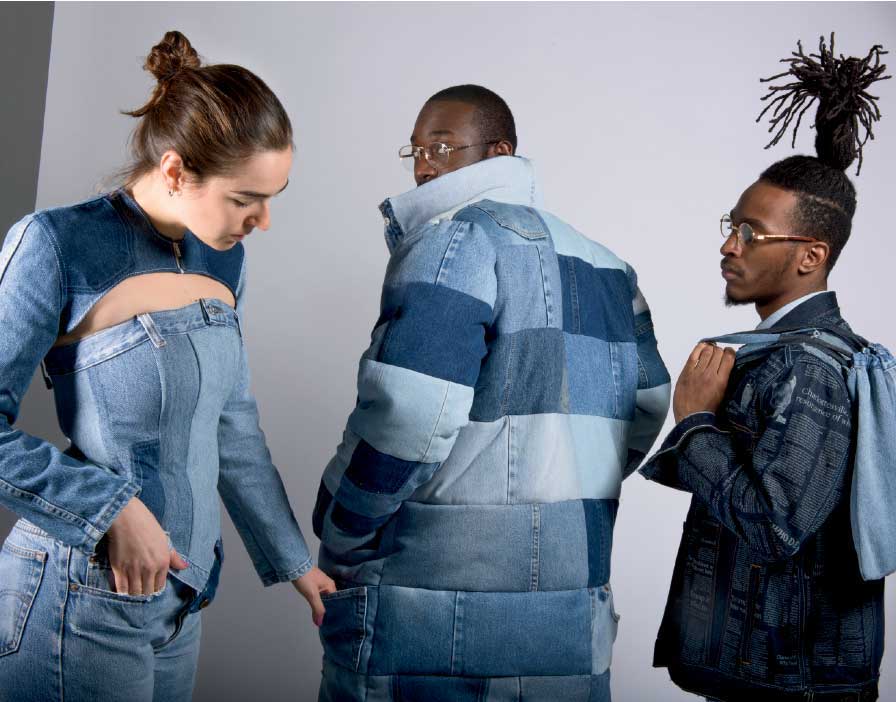 Gabriella Meyer in corset, guys in a puffer coat and a coat from her new line “We Wear the Pants.” Photography by Madeline Eckert

Toward the end of college, while working for a designer who ran her own latex design company, Meyer picked up some skills in laser cutting and engraving. This technique allowed her to incorporate patterns in the denim like text pulled from newspaper reports on sexual harassment as seen in her new line “We Wear the Pants,” a collaboration with Marta Goldschmied. This capsule line, recently highlighted in The New York Times style section, follows more traditional cuts but each one is papered with text that by virtue of its content is just as, if not more confrontational than the patchy oddities of Denimcratic. 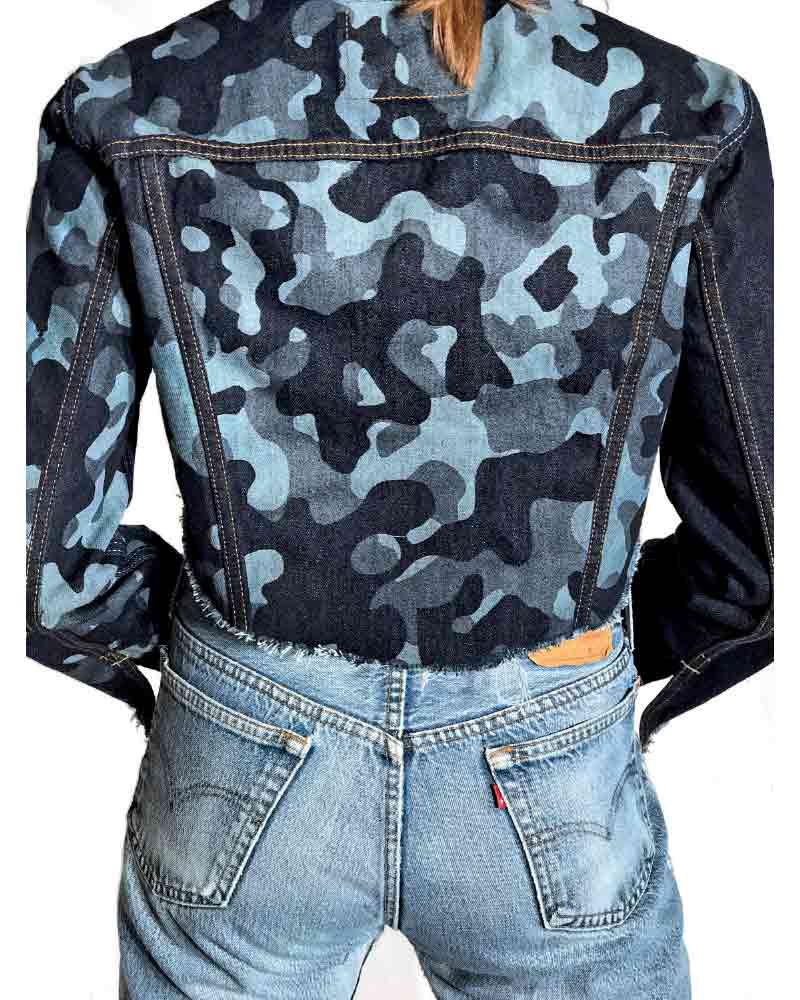 In a time when bodies have become so politicized, it is no surprise a fashion line could become a flashpoint. Instead of trying to deny the fact that politics has permeated the most mundane aspects of our lives Denimcratic invites the public to make a statement about this condition. How accessible this opportunity is to those who may wish to make that a statement is still a question that has drawn some heat for Meyer and her collaborator on “We Wear the Pants.” The price tag means the designs are not easily available to low-income earners who are often the ones most affected by the issues of our time. However, the cost is commensurate with their zero-impact material sourcing and laser engraving techniques. Ten percent of sales will also go the National Women’s Law Center, an organization that advocates for legislation in favor of women’s rights and equality.

Time will tell the impact of these designs on our political discourse but until then Gabriella Meyer will stay true to her convictions and continue to take on the world with her bold designs and creative vision.