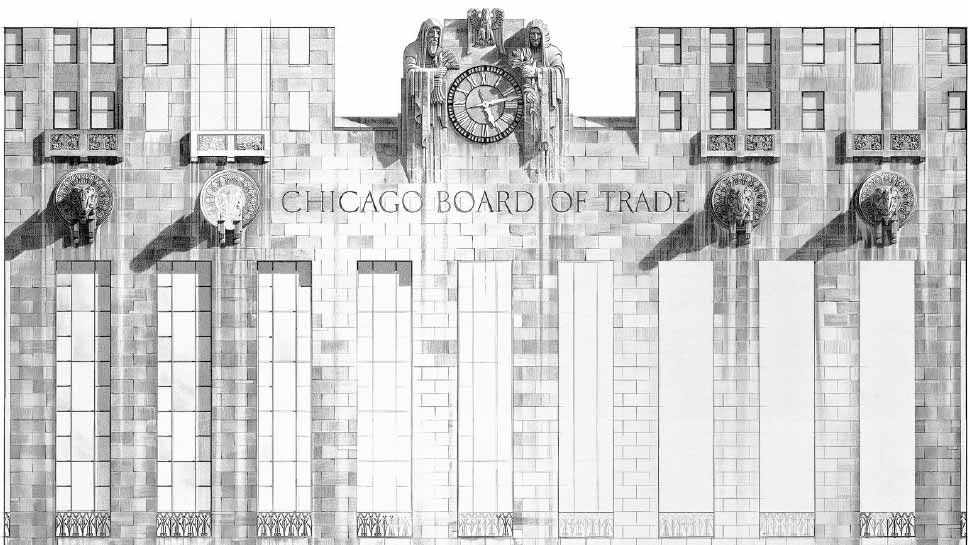 When Wilmette’s Jack Nixon graduated from art school with a degree in graphic design, his father asked him if he would draw the house of one of his friends.

“I did as my father asked and the illustration turned out beautifully,” remembers Nixon, who draws only in pencil. “It made me wonder if I might be able to turn that type of work into a business.”

After taking out an ad in the local paper, Nixon began receiving commissions from numerous North Shore homeowners for sketches of their houses.

“Although I was very busy, I realized that drawing original works I could publish was how I could make money as an artist,” Nixon says. 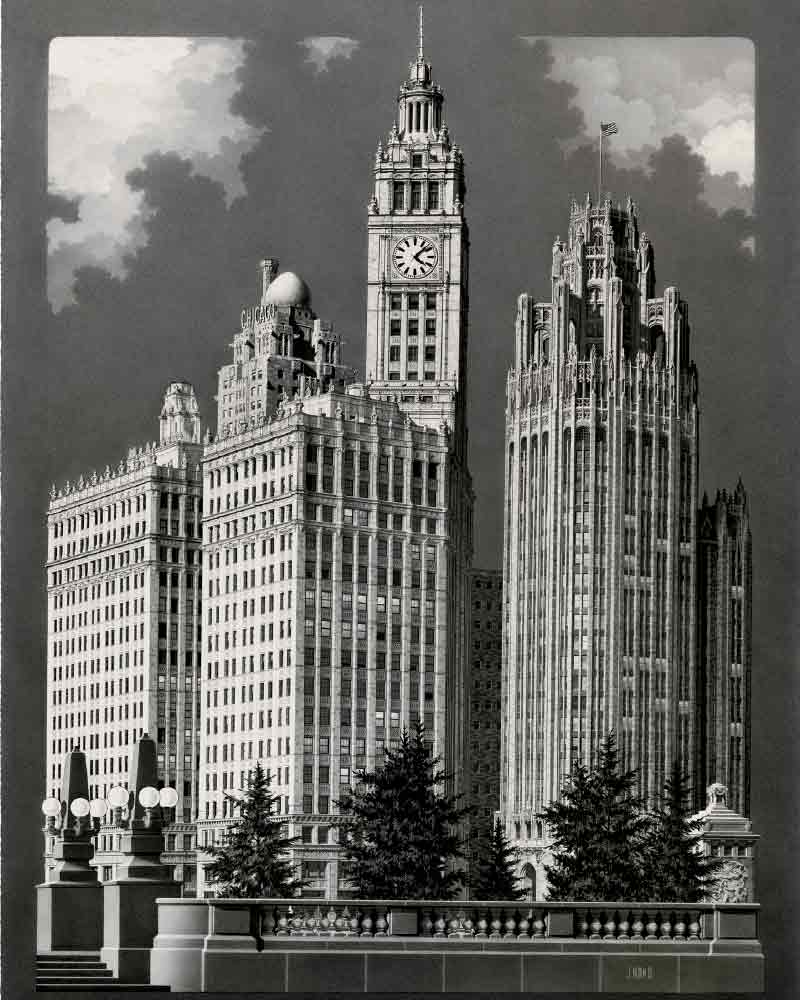 Study in Light and Form: The Wrigley, Tribune, and Medinah Spires

It wasn’t long before Nixon received a commission to draw Lake Forest’s downtown Market Square, an architectural marvel designed by Howard Van Doren Shaw that is credited as the first planned shopping center in the United States.

“Market Square was my first published print,” he says. “It was 1987. It took four months to complete and I loved every minute as I am an architect at heart.”

Nixon’s love for the design details in Lake Forest’s town square led him to turn his sights to Chicago. “It’s funny that even though I grew up in Wilmette, I rarely ventured into the city. When I started to explore Chicago for my art work, it was like seeing it for the first time.” 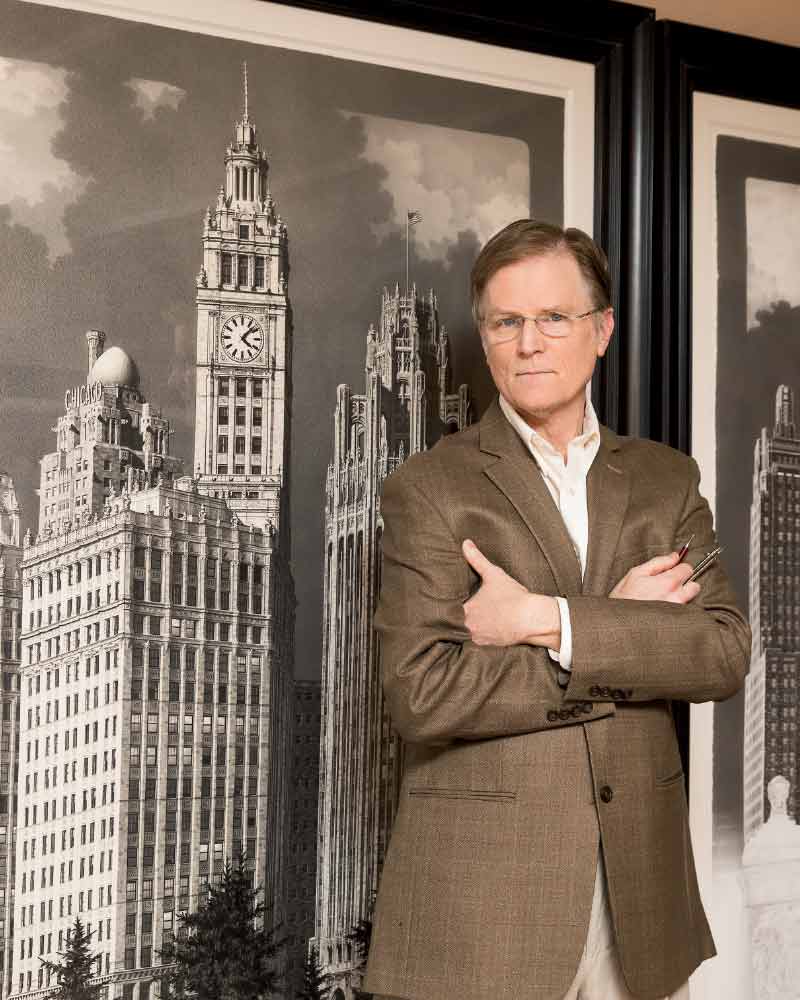 In the late 1980s, Nixon began to sketch what would become his life’s masterpiece, Studies in Light and Form: The Chicago Seven and the Michigan Avenue Bridge Sculptures. This six-piece suite of drawings is a large, 35-foot modular art installation depicting the many architectural and sculptural splendors appearing on and around the southern entrance and southern foot of Chicago’s Magnificent Mile. Nixon also handmade each frame that showcases his work. His exhibit made its first debut in Winnetka in October 2017. 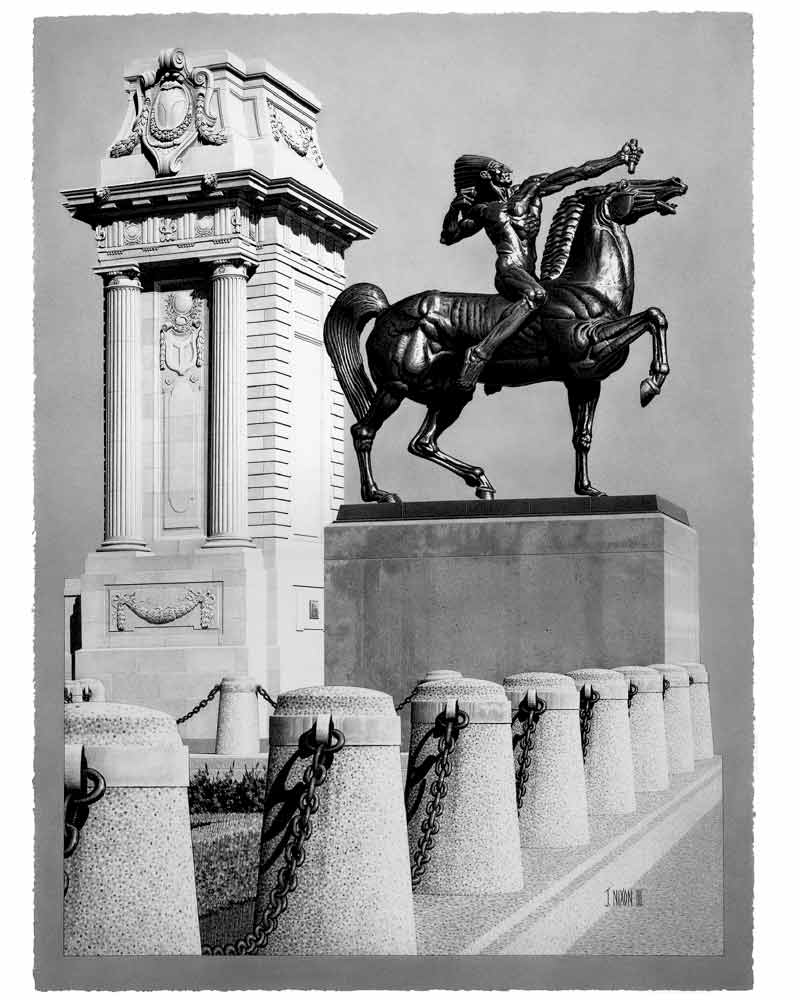 What is most awe-inspiring about Nixon’s work is his level of detail. It’s so complete that the illustrations look like photos—not drawings. From the shading on the brick and stone exteriors of the buildings to the definition of the light in the landscape’s background, Nixon left nothing to chance.

“I only worked on one piece at a time,” says Nixon of the collection that took more than 8,000 hours over 25 years to complete. “I gave up my days, evenings, weekends with friends, the chance to earn a real living, even sacrificed my marriage to complete this work. I just believed so sincerely that someone had to do this—that Chicago deserved it. The process took so long because when I finished my first drawing, The Wrigley, Tribune, and Medinah Spires, I was afraid that I wouldn’t be able to draw again at that level. It kept me from moving forward until I realized I had no choice but to finish what I consider to be my life’s work.”

Nixon’s hope is that Study in Light and Form will be the centerpiece of a 2020 architectural retrospective at the Chicago Cultural Center that will be celebrating the 100-year anniversary of the dedication of the Michigan Avenue Bridge.

“I’ve been holding on to these pieces for 30 years because I want them to stay in Chicago,” Nixon says. “I keep dreaming that a patron will find his or her way to my studio, purchase the collection, and then donate them to the Art Institute. That would be my dream come true. That all of my pieces remain together, in our city’s most beautiful art museum.”