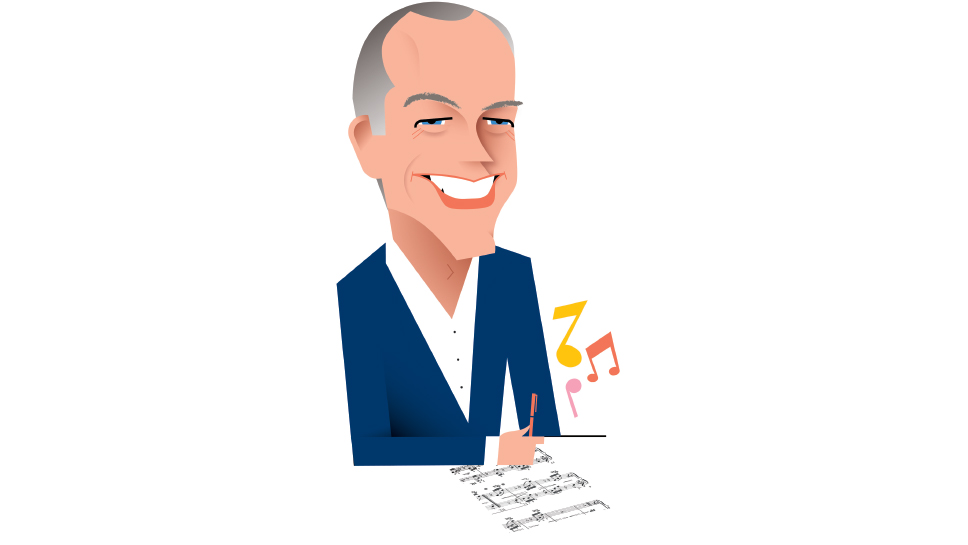 Stephenson started his musical journey as a young boy who fell in love with the trumpet, later earning a trumpet performance degree from the acclaimed New England Conservatory of Music. What followed were years as a professional trumpeter. In 2007, relocating to Lake Forest, Stephenson’s focus changed from trumpet performance to composition, a move encouraged by his wife Sally and ignited by his deep passion for the art of composition. Sheridan Road sat down with Stephenson to discuss the musical path that led to his role as composer.

Building His Career One Musical Note at a Time

“My very earliest memory is seeing my older brother’s trumpet on our orange couch—it was the 1970s—and I was nine. I quickly took a liking to the instrument, had some private lessons, and began attending the Interlochen National Music Camp as it was then called. This changed my life. I subsequently attended Interlochen for seven summers, and then also attended the Arts Academy there for my last three years of high school. One of the first things I recall—while I was just 10 years old, sitting in the junior orchestra at Interlochen—was playing Gliere’s “Russian Sailor’s Dance.” I was struck by how a piece of classical music could be so rocking! It was the same theme essentially throughout, varied, and always increasing in speed and excitement, and I thought to myself: ‘I had no idea classical music could be this fun.’ I was hooked. As I child, I often listened to CSO recordings, and always dreamed of becoming a trumpeter in the world-famous orchestra someday. That dream did not occur, but writing for the orchestra is even better!”

From Trumpeter to Composer…

“I joined the Naples Philharmonic as a trumpeter in 1990, at the age of 21, just after graduation from the New England Conservatory. One of our jobs in the orchestra was to play concerts at all of the local middle schools. After participating roughly 100 times, I started to look for new music to play that would be fun for the kids. One of my colleagues suggested we arrange (i.e., re-write) something more popular for them to enjoy. For some reason, I shot up my hand and said ‘I’ll do it.’ I did the work, and the kids loved it—but even better, my colleagues enjoyed it, too. Eventually, I started arranging for our orchestra—at the request of our Pops conductor, the highly regarded Erich Kunzel. After quite a bit of orchestral arranging, I decided to try my hand at writing original material. It was merely a hobby at first, while I was still playing trumpet professionally. It grew and grew, word began to spread, and in 2007, at the age of 38, I decided to make the transition from performer to full-time composer. We moved to Lake Forest, and essentially started over.”

“When I am home I always start my day composing—8 a.m. to noon I’m usually at it pretty hard. Then a break for lunch, a bit more rapid-fire composing for an hour or two. At 2 p.m., I have a standing coffee date with my wife. This happens every day, and we both look forward to it. I wrap up with related work to finish the day by around 5 p.m. We both try to be home—when I am not traveling—so we can enjoy dinner as a family.”

“Sally and I have four children: Deanna, Maddie, Kate, and Wesley. The older two are in college (George Washington and Boston University respectively; the latter studying composition), and then a junior at Lake Forest High School, and an 8th grader at Deerpath Middle School. Our house can be rather loud and music is a big part of it. We have a grand piano, which three of us use regularly.”

“My work will be premiered with the Minnesota Orchestra in June. Other orchestral works with the Quad City Symphony and River Oaks Chamber Orchestra (Houston) next year. Potentially a third symphony is coming up, in addition to several works for university bands, and other soloists/chamber music (throughout the country). I am about to have a CD released by Chicago-based Cedille records, and was also recently recorded by the famed “President’s Own” Marine Band in Washington, D.C. I’m always looking for opportunities in more theatrical avenues, such as an opera and/or ballet, so fingers are crossed there. I’ll also be doing more conducting as well, which I enjoy quite a bit. And of course, there is the world premier of my work at the CSO to be conducted by Riccardo Muti in the orchestra’s 2018/2019 season—a dream project! ”

For more information about Jim Stephenson and his projects, visit composerjim.com.