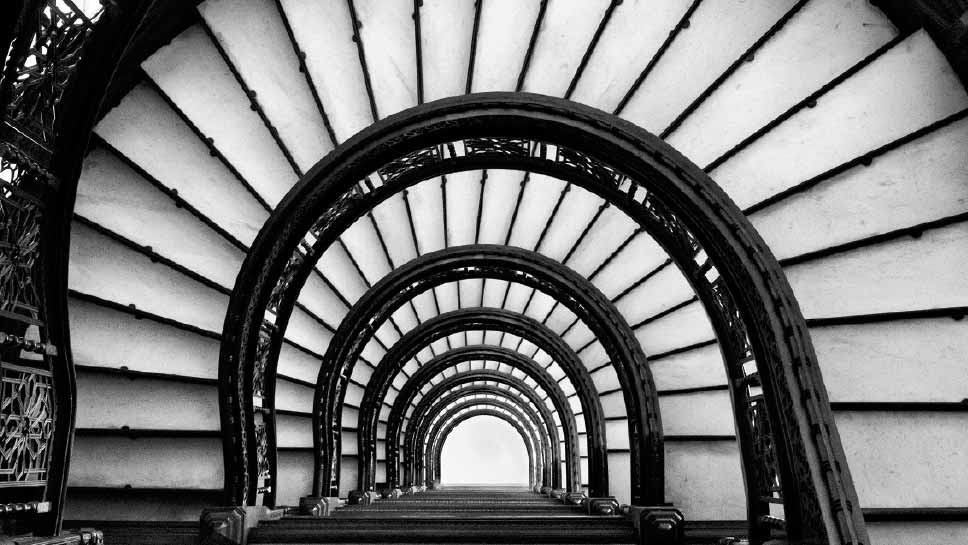 Paintings referencing the medical milieu have sparked intrigue throughout centuries and across continents. Dutch artist Vincent Van Gogh’s late 19th century Portrait of Dr. Gachet, the artist’s own physician, set a worldwide auction record at Sotheby’s in 1990 that is still held today. American painter Thomas Eakins’ The Gross Clinic, depicting a teaching surgeon mid-operation, was completed for Philadelphia’s 1876 Centennial Exhibition but ultimately rejected for its realism. Artist and subject, like doctor and patient, is a personal relationship. For three North Shore medical professionals, all collegial friends, their scientific practices have been greatly influenced and enhanced by their artistic pursuits. 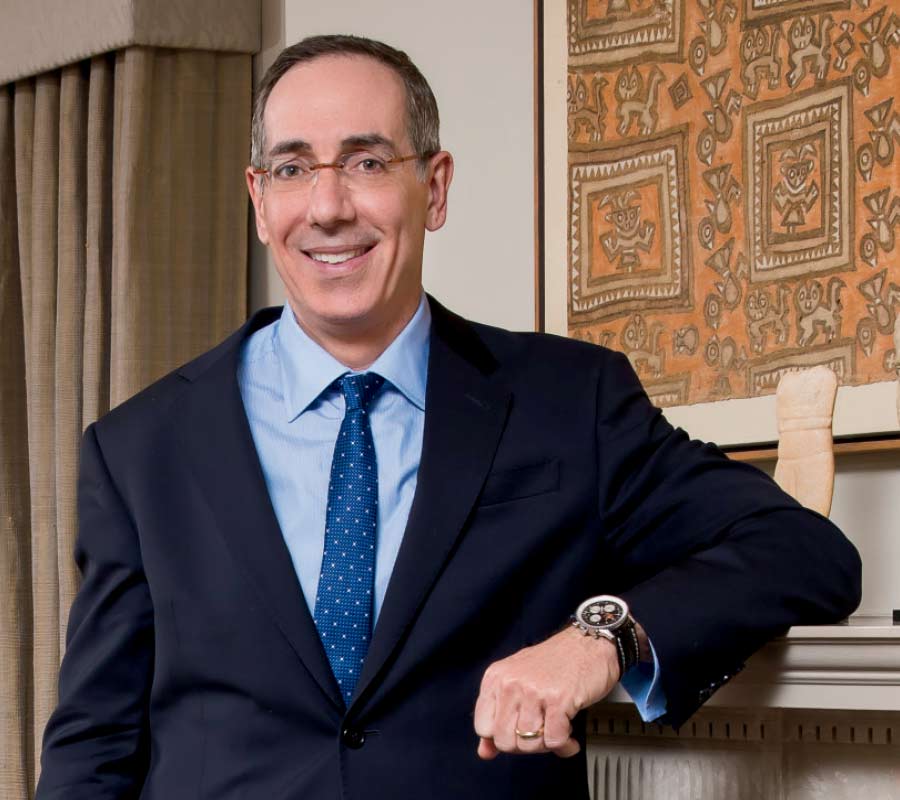 Dr. Mark Landau, a Cosmetic and Reconstructive Dentist, learned photography at a young age from his father, a clinical microbiologist, in their basement darkroom. “I had a gallery showing during college with photographs of my grandfather all taken along the Chicago River,” shares Dr. Landau, of early interactions with the medium. Attending dental school at Northwestern and then a subsequent residency in cosmetic and implant dentistry, lent itself to photography “but that was of cosmetic cases,” notes Dr. Landau. It was then that he realized aesthetic dentistry would be a perfect blend of his interests, and even used his own images to publish a book (still available worldwide) in the specialty. 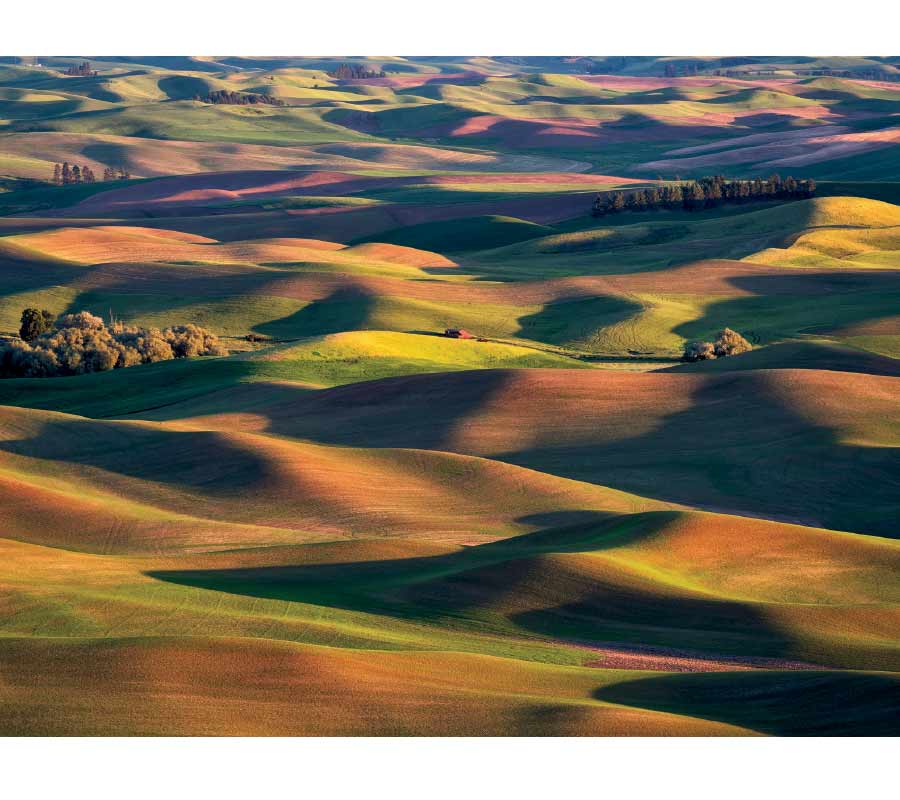 Then, not so long ago a patient, who is also a painter, noticed Dr. Landau’s photographs on the walls of his office and suggested he submit some for a gallery showing at The Art Center Highland Park. He did and was accepted for a one-person feature last July. “I sold several works and that was very gratifying,” says Dr. Landau. He takes many photographic trips annually to locales known for landscapes such as the Grand Tetons, Yellowstone, and the Palouse in Washington State where Red Barn documents his consistent returns to capture the colorful array of rolling hills. For architecture, however, sweet home Chicago remains his favorite. “Sometimes you only have 30 seconds to set-up the shot and take a picture,” comments Dr. Landau, as was the case with the elegant staircase of the Rookery Building in Rotation. Dr. Landau sources the same quality in technicians and treatments for his photographs as he does for his patients, using a Rhode Island printing resource that is renowned for representation in the Smithsonian and many other museums. “The process of composition, design, and color matching in photography are aligned in the artistry that I apply to creating smiles,” says Dr. Landau, “The crossover, to me, never ceases to amaze.” For more information, visit marklandauphotography.com. 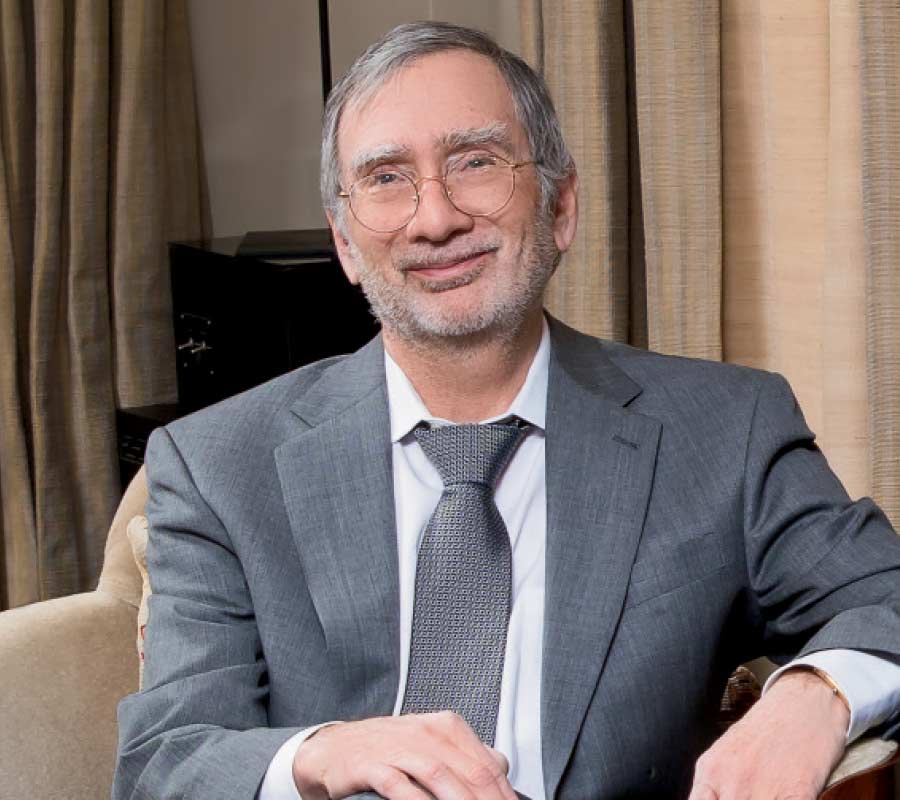 “Rush University used to have an ‘artist of the month’ exhibition in one of the main hallways” recalls Dr. Lawrence Layfer, a recently retired Rheumatologist and Emeritus Professor at Rush Medical College. He remembers the excitement of his first sale from that venue, “I framed the check and still have it on my wall.” While creativity originally stemmed from his undergraduate studies at the Iowa Writers’ Workshop, inspirations with pen expanded to pastels after seeing a painting demonstration on television and deciding to give it a try. That was thirty years ago, when Dr. Layfer, along with his daughter (now the author of this article), enrolled in a local course. He participated in various group shows at the time and jokes when two paintings were once stolen off a wall, “I felt I had arrived as an artist!” Soon, work and family life got busier, the instructor moved away, and Dr. Layfer’s tools were put into storage. Fast forward to an iPhone and a read through singer Tony Bennett’s book on art and music with paintings from his travels, and Dr. Layfer was re-inspired and began following a similar regimen of using his photos of people and places, and to sketching daily. 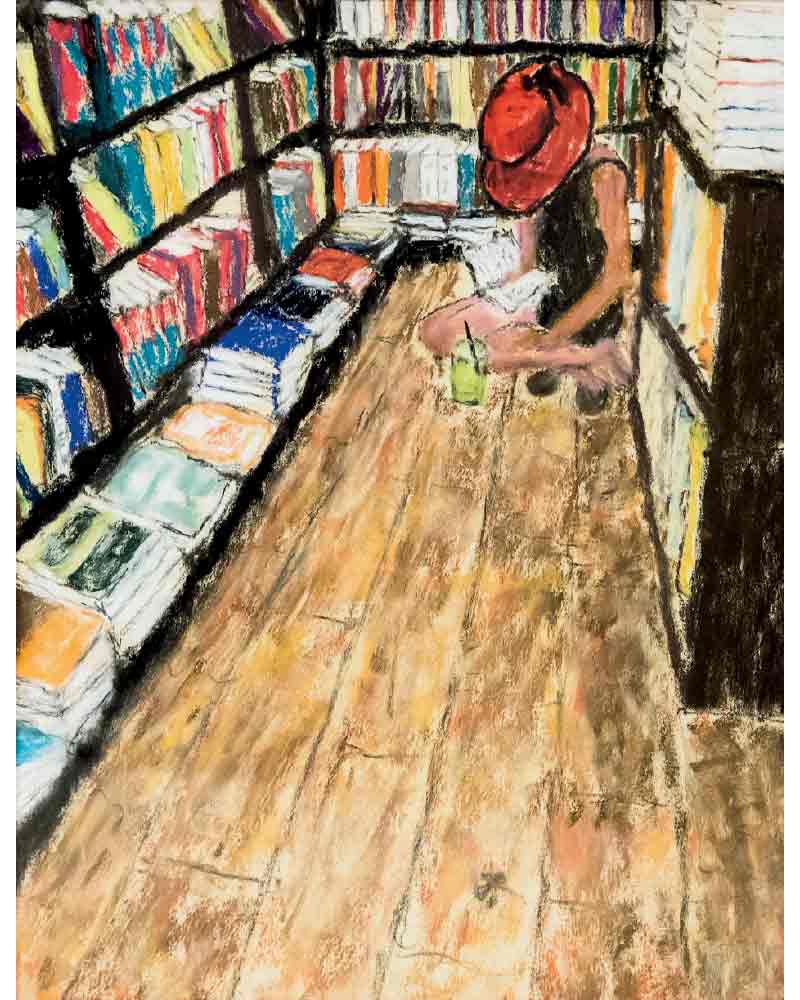 Afternoon in the Bookstore

“My drawing ability is for me the skill that matters most,” explains Dr. Layfer, “the figures in a painting are understood by how they relate to their surroundings, like a patient with an illness, that interaction is critical.” Sharing experiences without betraying confidentiality of identity, a necessity in his field, also translates to Dr. Layfer’s oeuvre. Afternoon in the Bookstore is from an image taken abroad where he was struck in the unusualness of a formally dressed woman, wide brim hat and all, casually sitting with a drink on the shop floor surrounded by book stacks. In Night Prayer, a new work from an old picture of his son at the Western Wall, posture and profile alone portray the deeper emotion associated with the scene. Dr. Layfer currently takes classes at the Evanston Art Center and The Art Center Highland Park, and last spring joined a pastels workshop taught in Hebrew with graduate students at Bezalel Academy of Arts and Design in Jerusalem. “I’ve found art to be a connector,” says Dr. Layfer, “it always seems to enable me to break down certain barriers and reveal a bit about myself to others while inviting the same in return.” 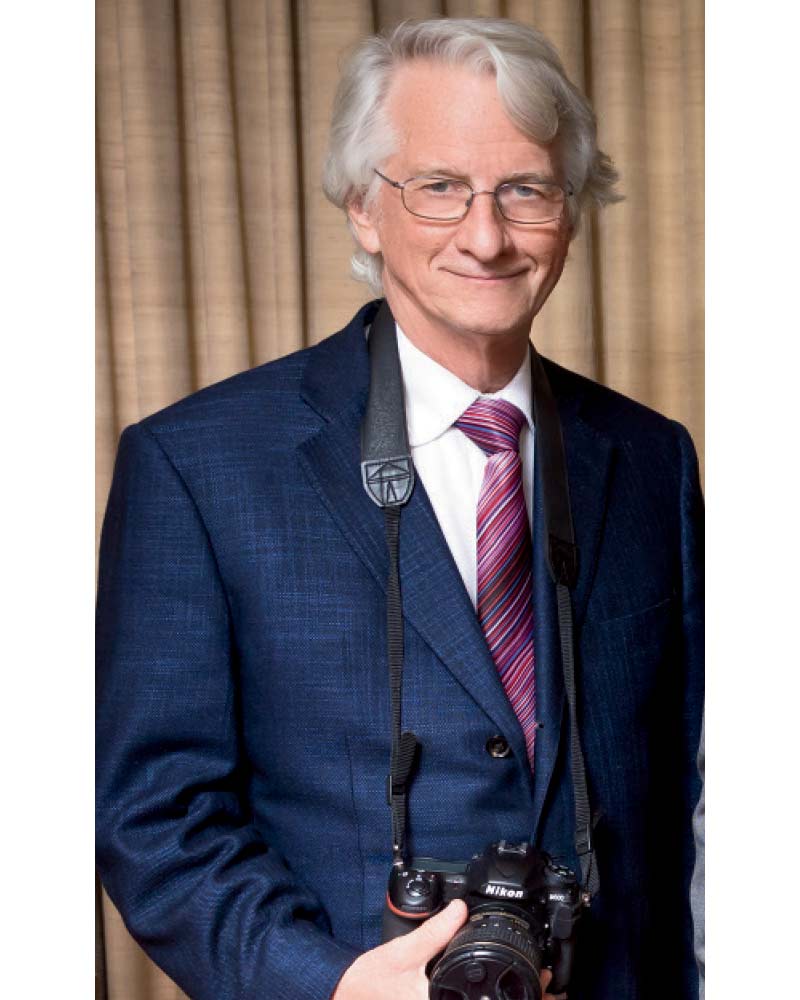 From the sunrises in Belize and Buddhist monks of Bhutan to birds in his North Shore backyard, Dr. Michael Lewis, an orthopedic surgeon with Illinois Bone and Joint Institute, has embarked on a photographic journey with his eye and his passport. A native of Texas, it was as a student at Brandeis University where his attention to art history was piqued and then further cultivated during his U.S. Air Force service in England. Days off found him with camera in far-flung locales like Nepal, or searching for much of the fine art that comprises his collection today. “It was actually a portrait thought to be Queen Elizabeth I that is responsible for my marriage,” reveals Dr. Lewis, crediting his good fortune of finding the painting and meeting an equally interested patron in his wife, a teacher on the base, both the same day. Self-trained, Dr. Lewis has displayed his portfolio in galleries around the United States, on a website, and in three books, the latest entitled One World: A View of Seven Continents (with proceeds donated to the Himalayan Cataract Project), with previous publications leading to signings at both the Book Stall in Winnetka and Barnes & Noble in Old Orchard. 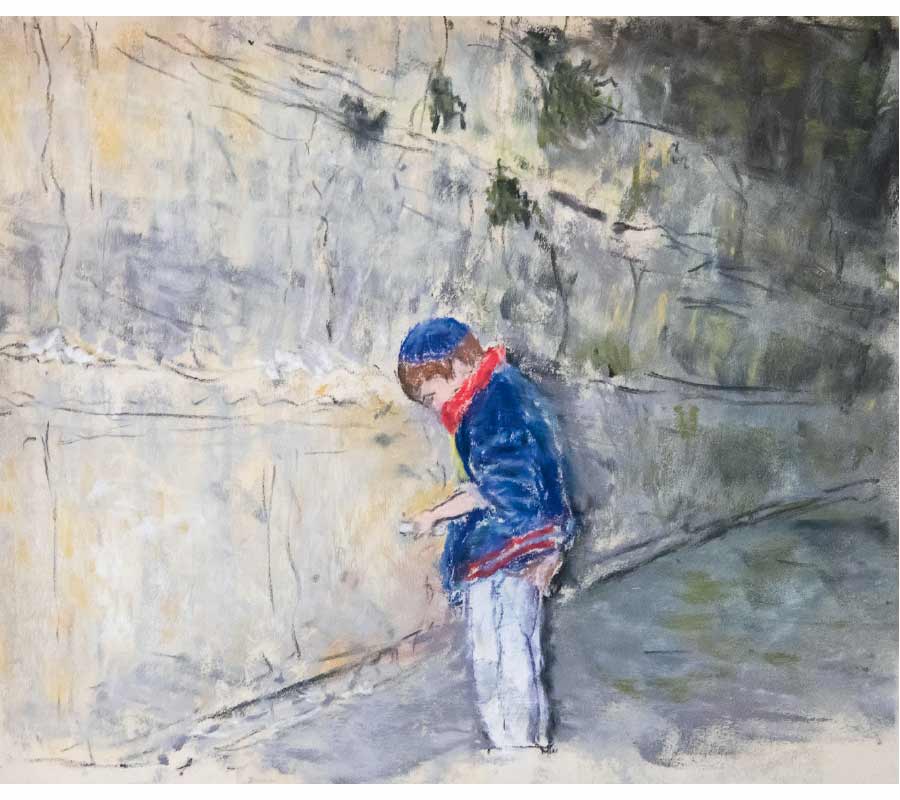 For Dr. Lewis, medicine and photography are about establishing mutual trust and sharing intimate moments. His photographs aim to find similar special engagements as in the adoring relationship between Grandmother and Grandchild in Cape Coast, Ghana or the feeling of solitude within splendor in Titania Zaouria Mosque in Fez, Morocco. As for technology, old-fashioned film may lack the instant gratification of digital, yet for this former Chicago Bulls doctor (two Championship rings are other treasured possessions) one of his best “shots” was a face-to-face Zebra and Cattle Egret in Zambia. “I had to wait until we returned home to develop the film,” notes Dr. Lewis, “but it was worth the suspense.” For more information, visit michaelslewismd.com. 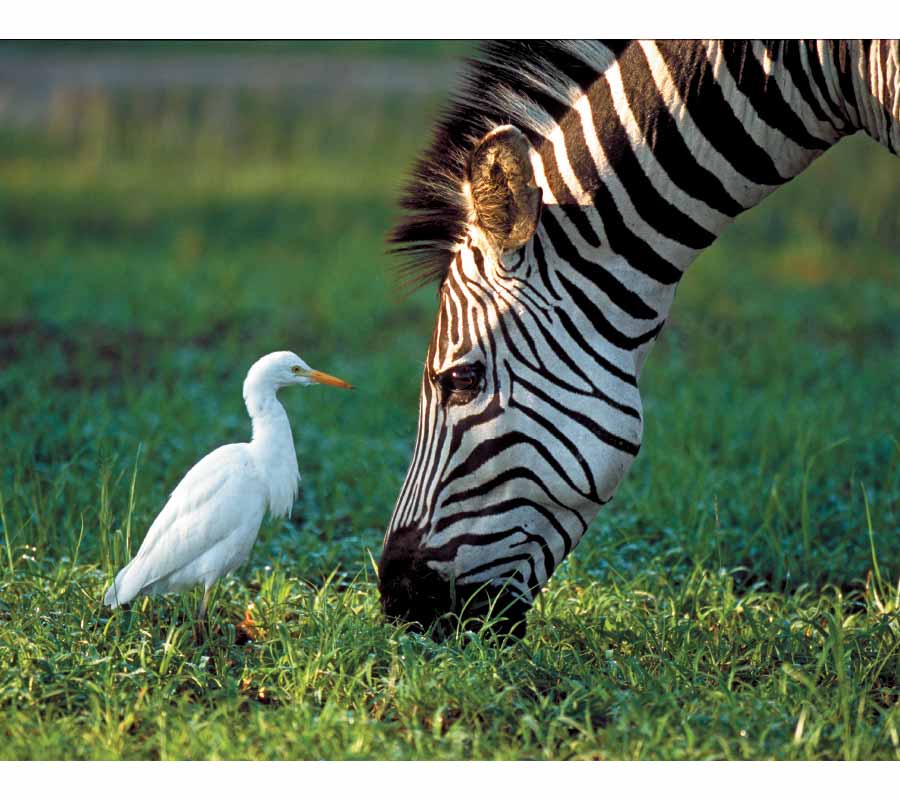 By stroke or by snapshot, these doctors have found ways to incorporate parts of their surrounding nature into the nurture of their care provided. A late orthopedic surgeon from Rush, Dr. Jules Shapiro (an impetus for this story), was a prolific sculptor detailing every element he knew of the hand into beautiful bronze and stone castings. That ability to abstract new forms from fundamentals is what essentially defines any respected diagnostician. And, the value of taking such an approach resonates as well in the lives and livelihoods of Dr. Landau, Dr. Layfer, and Dr. Lewis. It is no wonder the Hippocratic Oath references medicine as an “art.”