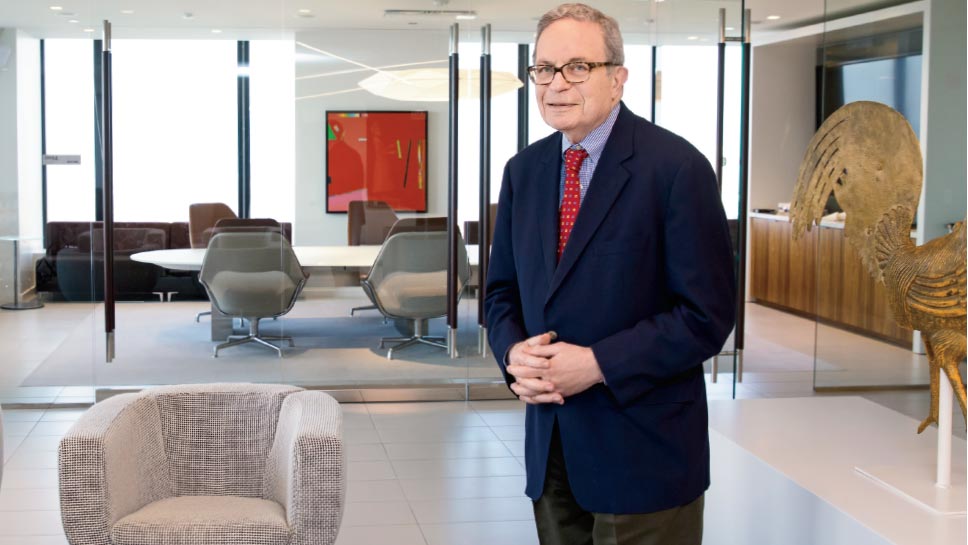 Highland Park’s Don Lubin of Dentons—the world’s largest law firm—gives us a glimpse into his illustrious law career spanning over 60 years and creating an everlasting impact on the city and the shore. PHOTOGRAPHY BY ROBIN SUBAR

Last December, William Stevens, an Atlanta partner and senior counsel to Dentons was the beneficiary of the inaugural Lubin Award. The honor recognized Stevens’ commitment to his clients, the firm, and the community, where he serves on several boards and contributes pro bono work for the local Habitat for Humanity chapter. Stevens has not met the award’s namesake, Don Lubin, but his reputation precedes him.

“I’ve heard his name mentioned many times, always in a sense of awe and reverence,” Stevens said in a phone interview. “Clearly he is a superior lawyer, but my impression of the role he has played in the firm is as the glue, promoting the values of the firm, that we (as ambassadors of Dentons) are all in this together, and we’re all in it for the common good.”

Lubin, a Highland Park resident, has been with the firm for some 60 years from its humble Chicago-based origins as Sonnenschein Nath & Rosenthal. He is 84, and he still comes into the office daily. Retirement is not on his to-do list. It’s the people, he explains; his partners at the firm and the clients with whom he still enjoys working.

Like many lawyers of a certain age, Lubin credits the Army-McCarthy hearings broadcast on television with sparking interest in a legal career. “When I graduated from the University of Pennsylvania, I had to think about what I wanted to do with my life,” he says. “Lawyers were featured prominently on television and I thought that looked like a neat profession. Turns out that whatever I saw on TV had nothing to do with the law I practice.”

Two pivotal life events brought the Brooklyn native (he attended James Madison High School, whose alumni include current Senate Minority Leader Chuck Schumer, Senator Bernie Sanders, and Supreme Court Justice Ruth Bader Ginsburg) to Chicago. He accepted a job offer from Sonnenschein, and he married a Chicago woman, Amy Schwartz, to whom he has been married to for 62 years.

Over the decades, Lubin has mentored many lawyers and CEOs. It is his way of paying it forward. He cites three men as great influences in his life. Two were partners at the firm, Bernie Nath and Sam Rosenthal, and the third was his father-in-law, Kevie Schwartz, an entrepreneur. “Each was intelligent, hard-working, and philanthropically oriented to do good deeds for others,” Lubin reflects. “They each got deep satisfaction from the work they did.”

Those are the type of people he seeks to mentor; hard workers who balance their work ethic with doing for others.

Lubin made becoming involved in the community a priority when he moved to Highland Park in 1960. He joined the board of the Parent Teachers Association (“They had difficulty recruiting men,” he says), for which he did everything from grappling with the issue of teachers’ salaries to playing Mr. Pick-a-Pocket at Spring Fair fundraisers. He was recruited to the boards of three institutions that were integral to the community, Highland Park Hospital, the Ravinia Festival, and the First National Bank of Highland Park. Lubin later became chairman of the Hospital and Ravinia Festival.

Lubin spread the gospel with his clients. When he was just five years out of Harvard Law School, he became Ray Kroc’s personal attorney. It was the early 1960s, and Kroc was poised to take McDonald’s public. Inspired by another of his firm’s clients, Bob Adler, the family whose name is affixed to Chicago’s Planetarium, Lubin broached the subject of philanthropic endeavors to Kroc. “Bob asked me, ‘What is Ray Kroc doing for charity?’” Lubin recalls. “I said that Ray never really had any money to speak of, but now that he had gone public, he had become wealthy. Bob insisted to me that lawyers have a responsibility to the general public to make sure that their clients are taking care of the community philanthropically.” 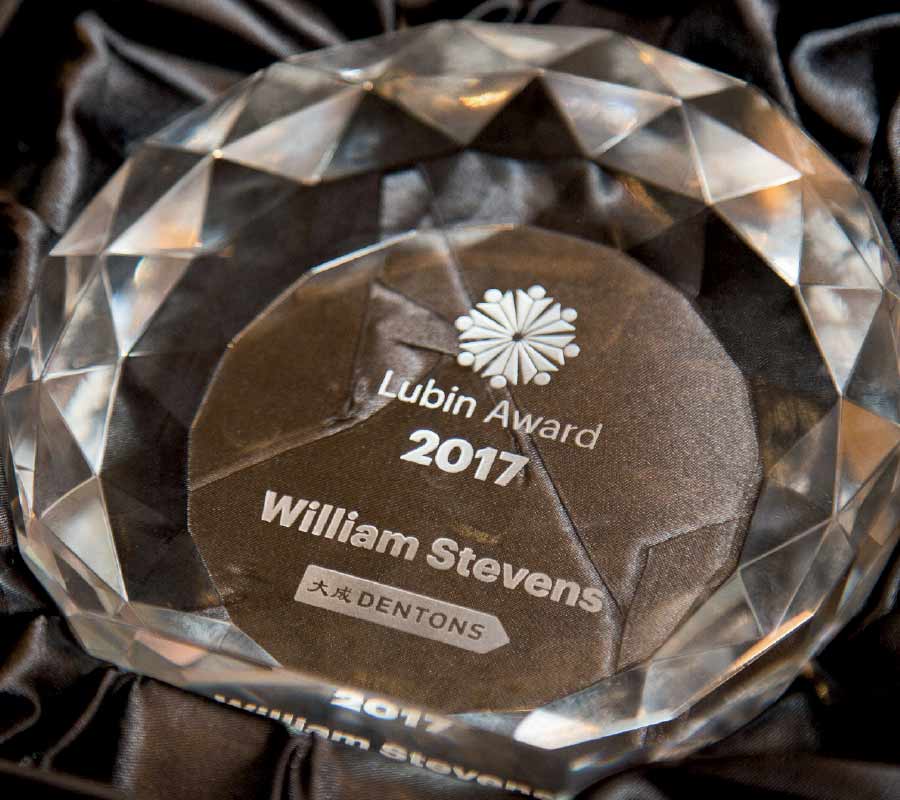 Lubin considered what Adler told him, and at his next meeting with Kroc, resolved to bring up the topic. “I gathered up all my courage and I said, ‘Ray, have you been thinking of charitable giving now that your financial position permits it?’ He asked me how much I thought he should contribute. I held my breath and said, ‘What about $1 million to various Chicago organizations?’ He said, ‘1 million dollars?’ I thought I was done for, but he turned to his wife and said, ‘We can do more than that.’”

Kroc charged Lubin with compiling a list of organizations to which Lubin recommended he donate. Among them were several hospitals, including Northwestern, Michael Reece, and Children’s Memorial. “It was a pleasure making that list,” Lubin says with a laugh.

It was during Lubin’s association with Kroc that Kroc struck out in a bid to buy his beloved Chicago Cubs. Lubin facetiously calls it the biggest disappointment of his career. “Phil Wrigley was the Cubs’ owner at the time, and Ray sent emissaries to inquire about buying the team,” he recalls. “Wrigley said he wasn’t interested. I had dinner with Ray, and I asked, ‘What about the White Sox?’ He said he was not interested in owning an American League team. He said to forget about it, and that killed me.”

The biggest disappointment turned into one of the highlights of his career when Kroc was successful in buying the San Diego Padres in 1974. “We hit the jackpot when the Padres played the Cubs in the 1984 playoffs,” he says. “But there was a little difficulty in cheering for the Cubs; my sons were Padre batboys.”

Lubin takes immense pride in playing a founding role in establishing the Ronald McDonald House Charities, for which he served as a trustee for almost 40 years, stepping down from the board only last year. “It’s one of the most gratifying things I’ve done in my career,” he says.

Yet another is the establishment of the Legacy Charter School, a pre-K through 8 institution in Chicago’s Lawndale community. The occasion was Sonnenschein’s 100th anniversary. “A few of us thought we should do something more than having a dinner,” Lubin says. “We wanted to do something to say, ‘Thank you’ to Chicago and to give something back. We created this charter school as a gift to the city.”

The school recently moved into its new building. It educates more than 450 children and has been given a high-performing “Level 1” rating by Chicago Public Schools.

Lubin is honored that an award was created in his name. His more than a half-century career has been one great personal satisfaction. “I’ve been fortunate in that I enjoy very much what I am doing,” he notes. “A lot of people became a part of my life that I wouldn’t have known otherwise.”

And he continues to be an inspiration to others. William Stevens considers it an honor to be the recipient of the first Lubin Award. “I’m happy to have my name mentioned in the same sentence,” he proclaims.