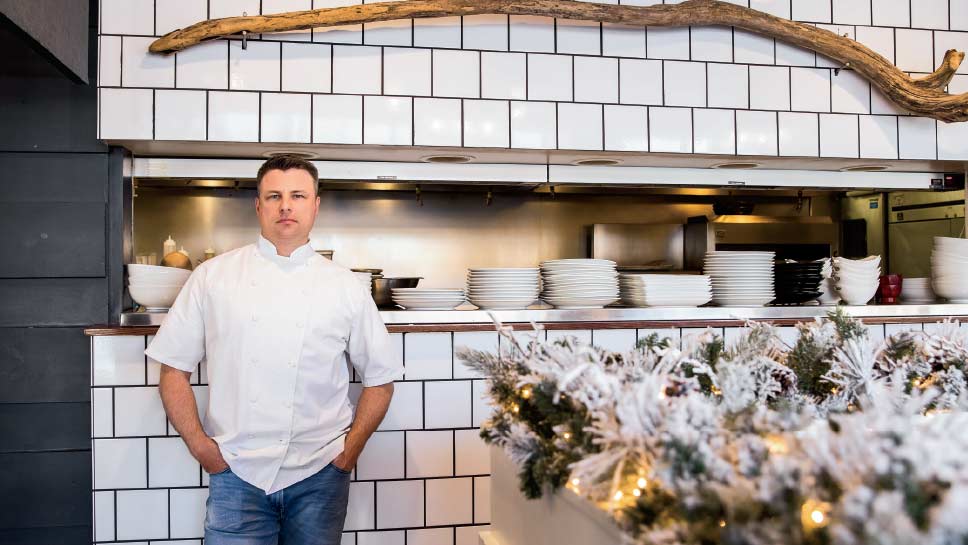 Chef John des Rosiers tells us the stories behind some of Inovasi’s delicious offerings. PHOTOGRAPHY BY ROBIN SUBAR

John des Rosiers, chef and proprietor of Inovasi, arrives at our table in his crisp white chef’s coat with a welcoming nod and a firm handshake. This is just after he gave us an incredible culinary tour of his menu. Some dishes we chose; some he chose; all were unique to the Inovasi experience and absolutely exquisite. Our experience of each dish is concluded with a quote from des Rosiers himself.

A plate of Culatello is the first thing to arrive, tissue thin slices of ham aged for two years in Italy. It looks like prosciutto, but tastes so much more buttery and decadent. “There is no ham like it. The process of making it is passed down from generation to generation in families. There’s only a small number of people who know how to make it authentically. The drying process moves it from room to room with different precise humidities and temperatures over a number of months that sets the ham on how it will age from then on.” 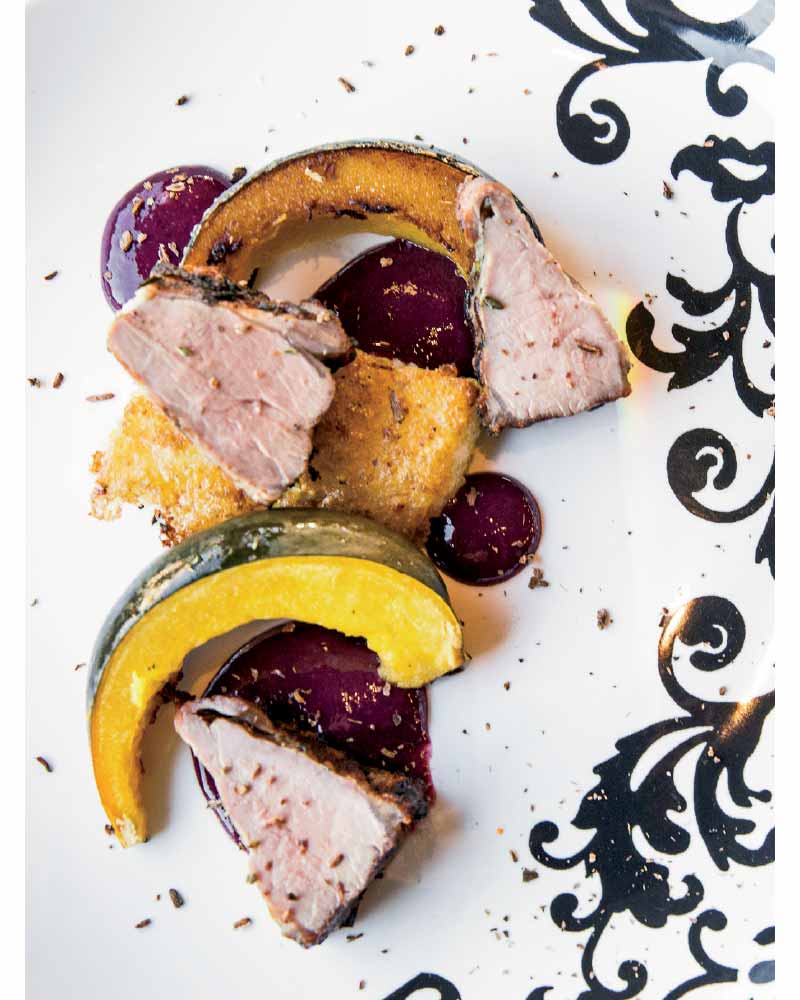 The sushi menu is a brand new addition to Inovasi. Sushi Chef Tou Vang sent the Spicy Ahi Tuna roll our way. Although it came with soy sauce and wasabi, the roll didn’t need any kind of adornment. It was crisp and delicious with a slow building heat from a thin layer of smooth Japanese wasabi inside the rice and a drizzle of housemade jalapeno mayo on top. “We spent five months looking for the right chef and the right ingredients. The rice comes from one farm and the soy sauce comes from one guy in Japan, and we get fresh fish in every day. I wanted to show people who are used to the sushi around here, that there is a different way to do it. We just want to make really great sushi.”

We were absolutely floored by the New England Cod Chowder. The cream from the driftless region of Wisconsin is ambrosial, infused with the flavor of bacon, perfectly prepared potato, and fresh, flaky cod. “One of the things that makes real chowder great is filling it with bright, fresh ocean seafood, and also making it right when customers order it. When somebody orders the chowder, it takes 12 or 13 minutes to make from scratch, really great fresh cream, great cod, great white wine, homemade bacon, sweet onions. It only has five or six ingredients, but they’re great ingredients.” 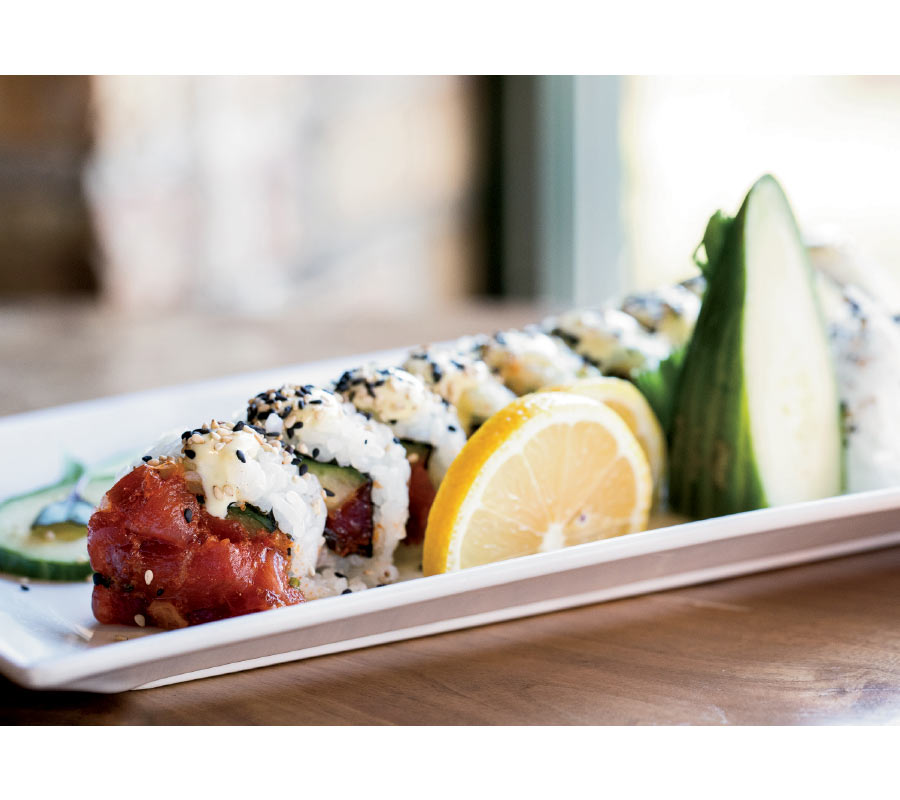 A dish comprised of locally grown vegetables originally called Winter is Coming… took the moniker Winter is Here… around December, and continues to stubbornly wear it through February. Although we can’t wait for it to warm up so it can be renamed, the combination of whipped squash, roasted carrots, smoked pumpkin seeds, fried cherry tomatoes still on the vine, and crispy baked cheese was wholesome and warming. “I wanted to do a dish of vegetables that store well over the winter. I like smoky, savory things so a little bit of smoke on the pumpkin seeds. The tomatoes are grown year round in greenhouses in western Illinois. He’s got 80 acres of greenhouses. For the first six years the restaurant was open, we never had tomatoes from the end of October until June. We threw a party when we found these tomatoes.”

The Texas Style Brisket is the real deal. Underneath the smoky blackened exterior waits incredibly tender meat paired with creamy Wisconsin polenta daubed with goat cheese and the tang of bourbon shallots. “All of our beef comes from CDK farms. It’s dry aged 28 days. We marinate it for a couple days, smoke it for 20 hours, and that’s it.” 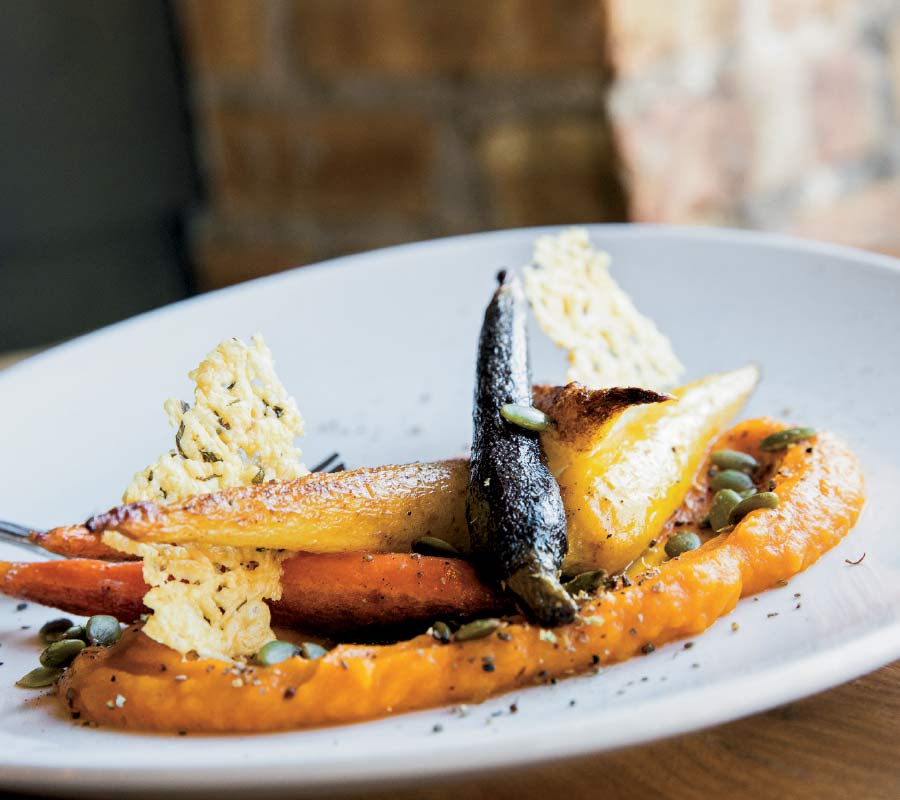 The Sioux Style Grilled Lamb is a new arrival to the menu. It’s rich and juicy with a sweet Wojapi mint sauce that brings a lovely blackberry flavor to play against the succulence of the meat. The sides are as much about texture as authentic flavor pairing with roasted squash and crispy hominy and grits. “I had a customer recommend this book called The Sioux Chef. It’s a great book. Traditionally, we’ve done Japanese, French, and Italian techniques with everything being locally grown. I thought—‘What’s more local than Native American cooking?’ That dish is as close as we can replicate to what they would have made.”

For dessert we were the guinea pigs for a brand new dessert item: housemade vanilla ice cream topped with 12-year old balsamic vinegar aged in cherry wood barrels and topped with a sprinkling of pistachios. There’s a sharp, sweet balsamic sting that perfectly complements the ice cream in a way we never would have anticipated but were immediately addicted to. “Unexpected, different, but it makes sense the more you eat it. This is how they do it in Italy, except with gelato. I bought five different types of balsamics in Italy aged in different woods. We have another dish coming to the menu with the juniper wood balsamic.”