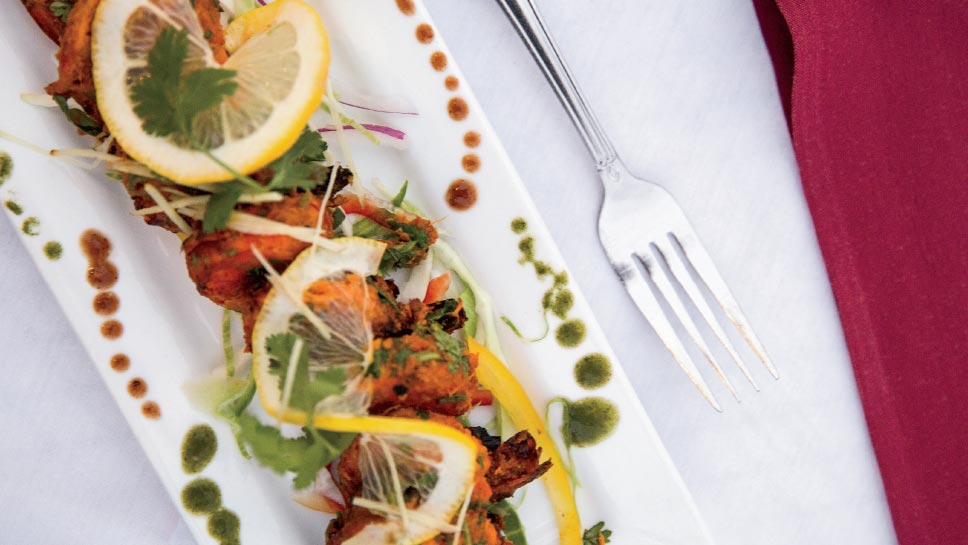 Whether sticking to the classics or broadening your horizons, ClayOven Tandoor has a massive menu of delectable Indian favorites. PHOTOGRAPHY BY ROBIN SUBAR

Be prepared: This menu is huge. After getting a good look at the sheer wealth of options, it’s no wonder that so many people decide to come to ClayOven Tandoor for the delicious lunch buffet. It’s a good way to narrow things down while sampling quite a few of their offerings.

The first thing we noticed is how bright and inviting the space is. With huge vaulted ceilings, light clapboard walls, tiffany glass lamps, and white table cloths, everything is comfortable and cozy. A display wall running the length of the room is lined with small statues of Buddha and potted trailing greenery. The lively laughter of a private party echoed from the adjoining dining room and added to the festive atmosphere.

The complimentary table offering at the beginning of the meal is crisp papadum flatbread with three dipping sauces. The bread is paper thin and flecked with seeds, the perfect crunchy vehicle for a spicy and fresh cilantro and mint dip, a fruity and tangy tamarind dip, and a refreshing and salsa-like pickled onion chutney dip.

We’re as guilty as anyone of sticking to some of our tried-and-true favorites when we go to an Indian restaurant. But we wanted to branch out and broaden our Indian food horizons, so we asked our server for some of his personal favorites and what he thought were some excellent traditional dishes. 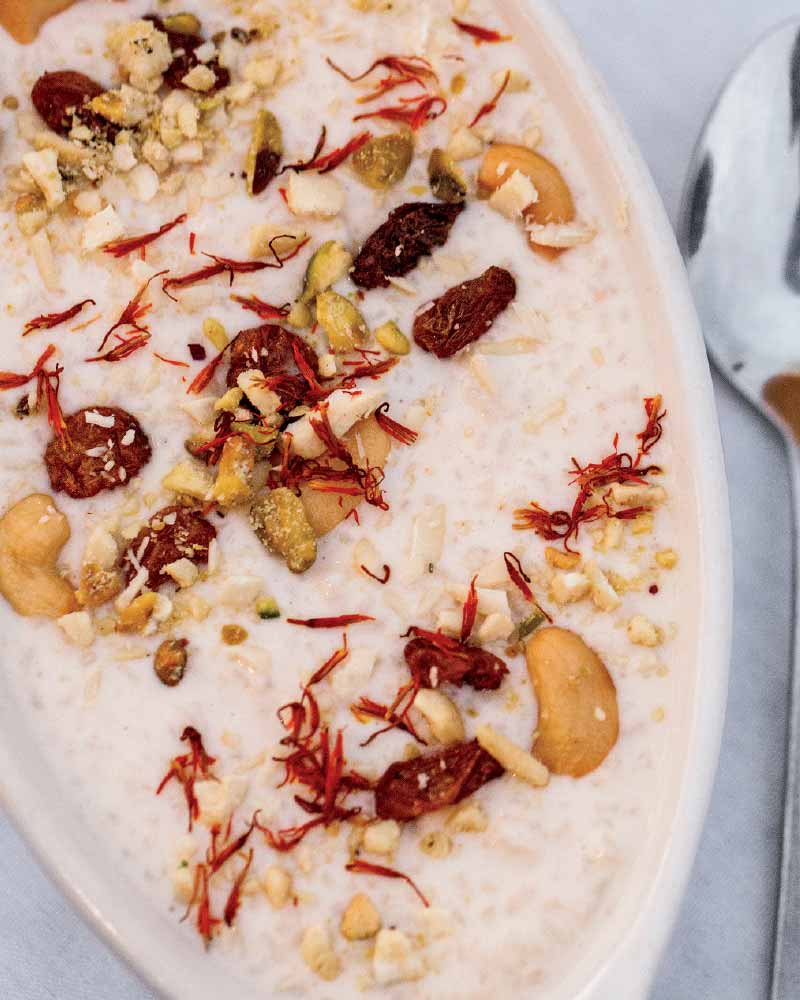 First, from the appetizers, we sampled the Paneer Tikka, mildly seasoned cubes of cottage cheese grilled in the clay oven. Each cube rides a slice of grilled onion and grilled red pepper and is topped with a small sprig of mint. The cheese is deliciously dense in texture, and with the accents via the grilled vegetables, it makes for a subtle intro to Indian flavors.

The Tandoori Shrimp arrives lined beautifully down a white platter on a bed of sliced bell pepper, red onion, mint leaves, and lemon. The rich blend of Indian spices coating the shrimp complement the seafood flavor in a way that nothing else can quite match. The initial bite is densely flavorful, a spicy aspect sets in before the flavor of fresh shrimp rises throughout the palate, and it finally resolves in a nice cilantro chaser.

Medhu Vada was a dish we’d never encountered before, but were very glad to add to our Indian repertoire. They’re fried donuts made out of spiced lentils and rice covered in flecks of onion and swimming in a spicy sauce. The crunchy exterior and soft, tasty interior give these the comforting feel of potato samosas, but the sauce adds a deeper flavor that intensifies as you eat it.

Moving into the entrees, the Lamb Roganjosh is a dish that creeps up on you. It’s very much like a cross between a curry, in terms of its flavors, and a stew, in regards to its tender meat and warm comforting appeal. We can see this dish being especially tempting in the winter weather. There’s also a subtle spice factor that starts to build pleasantly at the back of the throat the longer you eat it. 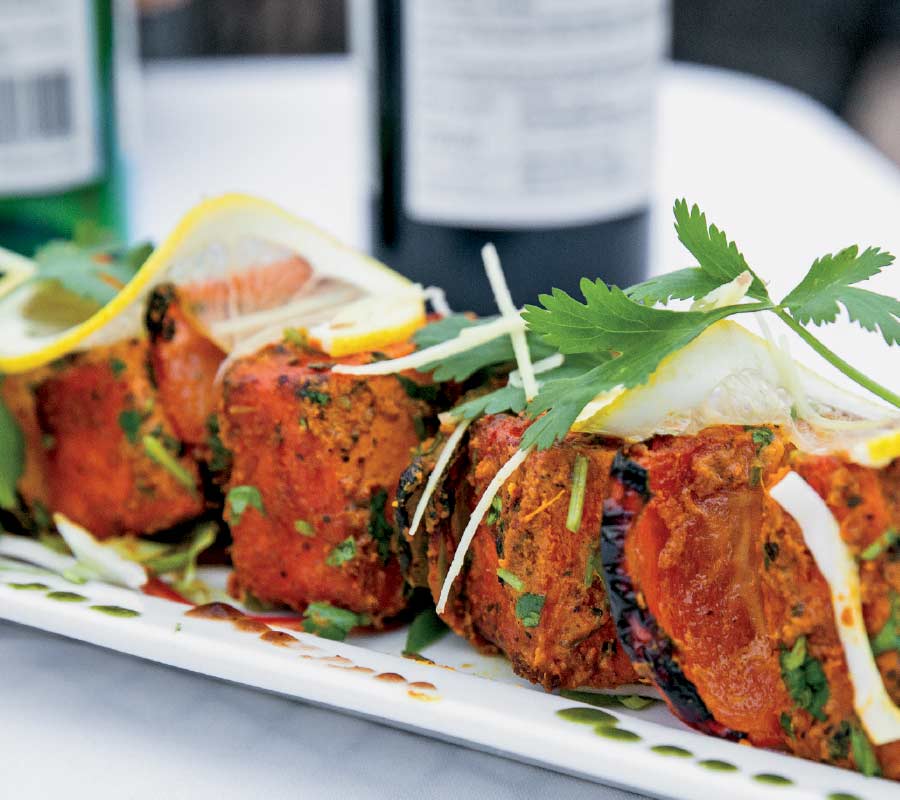 Just like the Lamb Roganjosh, the Chicken Chettinad is served in a charming copper bowl called a handi. The longer the food sits in the handi at the table, the more infused with rich delicious flavors it becomes, steeping like tea. The Chicken Chettinad is much less subtle than the Roganjosh. Cubes of chicken are cooked with poppy seeds, cloves, cardamom, and grated coconut, but what you most experience is a quickly building heat. If you’re a spice lover, like us, then this is one you’re going to want to try. After a few bites, the heat builds high in the chest and the hiccups start. Delicious.

As good as the entrees are on their own, they were both elevated by the fresh naan bread. Both regular and garlic versions made it to our table, fresh from the sides of the hot clay oven and glistening with a layer of brushed-on butter. Whether you’re eating it as a palate resetter between bites or tearing off pieces to wrap bite-sized chunks of saucy meat, the naan was one of the highlights of the evening.

For dessert, we shared a ramekin of Kheer, cardamom-flavored rice pudding. It’s rich and cooling­—the perfect combination following the Chicken Chettinad. It shares the texture of tapioca or dense rice pudding with tasty pistachio chips scattered over the top and the aromatic flavor of cardamom mixing with a vanilla sweetness in every bite.