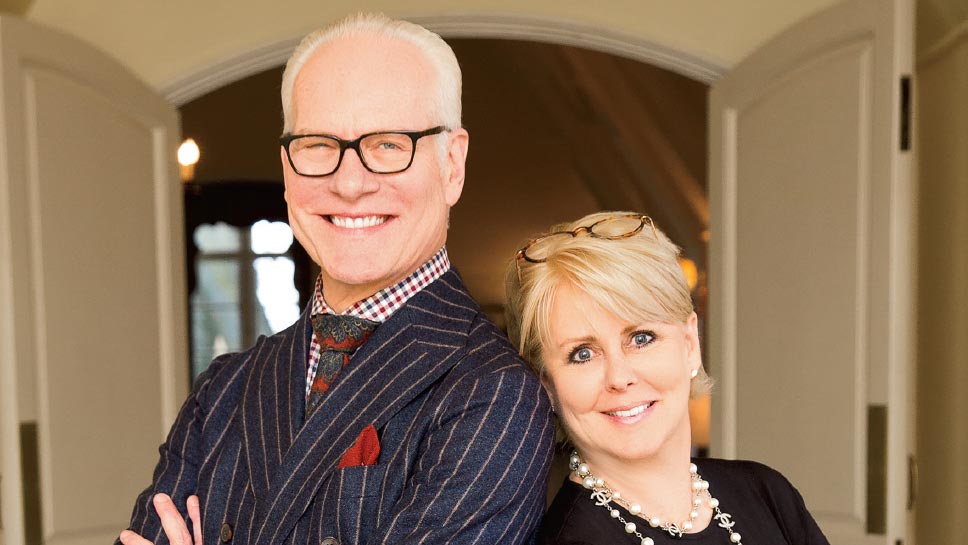 Anyone who cheered for Lake Forest’s Peach Carr when she appeared on Season 8 of television hit Project Runway got a front row seat to a beautiful friendship blooming between her and host Tim Gunn. Last fall at Carr’s invitation, Gunn spoke and signed books at an event benefiting the new Northwestern Lake Forest Hospital.

“Peach is so incredibly special to me,” says Gunn. “We had an instant connection on the show that has lasted all of these years. I’m one of her biggest fans.”

Gunn and Carr first met in 2009 when she auditioned for Lifetime TV’s runway series. “When Tim saw my samples, he told me that I wasn’t quite yet ready,” Carr remembers. “It was the best advice I could have ever gotten. I came back the following year and I was ready to go.”

Dubbed as “country club chic,” Carr was worried how her aesthetic would translate in New York City, where the show was filmed.

“When they tell you how to pack, they’re very clear in their instructions about wanting you to stay true to who you are,” explains Carr. “I’m preppy. I have the Bermudas, the big monograms, the loafers—that’s who you see. When they were casting, they knew from the beginning who they were getting.”

Gunn was stopped in his tracks during Carr’s audition when she described her clothing as “mullet-ware,” business in the front, party in the back. “A signature Peach Carr design has an element of surprise, a little something unexpected usually in the back of the dress. It might be a big button or a bow, but my designs always leave people talking,” she says.

Fast forward 16 seasons and Project Runway is still attracting audiences. “Honestly, I never thought we’d make it to season two,” laughs Gunn. “I thought it would end up being one of those experiences that I talked about at cocktail parties. It’s a dream come true that the show has had such staying power.”

Although the humble Gunn is unlikely to admit this, much of Project Runway’s success is due to his authentic mentoring of the new cast each season and his genuine care and interest in the success of each designer.

“Every season we have a whole new group of designers—different DNA, different backgrounds, and they energize me,” says Gunn. “I taught for 29 years and every semester I’d have these very diverse groups in my classroom. Project Runway is a lot like my classroom used to be. I love it.” To date, Project Runway has graduated more than 200 designers and this season, with Gunn’s support, the show’s models varied in shapes and sizes and the ratings went up by 15 percent.

“Tim is the real deal,” adds Carr. “The nice person you see on television is the real Tim Gunn. We can go a year without speaking and then pick right up where we left off. He’s one of the best men I know.”

True to himself, Gunn is not a fan of trends. So if you ask him what the must-have item is for spring 2018, he’ll turn the question around on you.

“Before you go out and shop, do a closet inventory,” says Gunn, the former chief creative officer at Liz Claiborne. “What do you wear all of the time? What will enhance this? What pulls at your heart strings? If something is pulling at your heart strings, go get it. When you’re a slave to the trends, you become a fashion victim. It looks like you’re trying too hard. It’s okay to be aware of trends as long as you’re dressed for the lifestyle that best suits you.”

Carr continues to show her collection in fashion shows around the country. She has recently launched a line of dresses for women who don’t typically wear a size 2 or 4. And, her handbags continue to be one of her bestsellers.

As Gunn left Lake Forest on a blustery October day, we were left wondering if he and Carr would collaborate on a future project.

“Life has serendipitous paths,” he says. “You never know where it’s going to take you.”