The first time I saw a Joshua Jensen-Nagle photograph was at my friend Valeria’s house in Milan. It was an Italian beach scene, the bright dots of beach umbrellas and tiny, also-bright dots of people twinkling like colored Christmas lights over white sand that merged with the froth of white waves. “Isn’t it fun?” asked Valeria. “I just love his photos. They make me so happy. I want to step in and play in them!”

“Yes,” smiles Anne Loucks, owner of Anne Loucks Fine Art Gallery in Glencoe, who has represented Jensen-Nagle in Chicagoland for eight years now, and has more than 25 of his pieces in her collection, an excellent array, given Jensen-Nagle’s popularity worldwide. “I see that reaction so often. People are really drawn into Jensen’s works. They have this dreamlike quality to them that suggests a place you have been or can relate to. Each one compels you to make your own associations. They have such a nostalgic, memory-inducing feeling about them.”

Hearing this, Jensen-Nagle smiles. “That’s very nice to hear,” he says, “I’ve always sought to allow people to bring their own experiences to my work, allowing them to connect with the pieces on a personal level.” And, he adds, “because I’ve always used my life experiences—my past, to create these works, they are infused with dreams and memories of my own youth. For many of these photographs, the “lens” I am shooting through recalls a time of coming-of-age, such a joy-filled season. I think that comes through in the work, and people relate to that.” 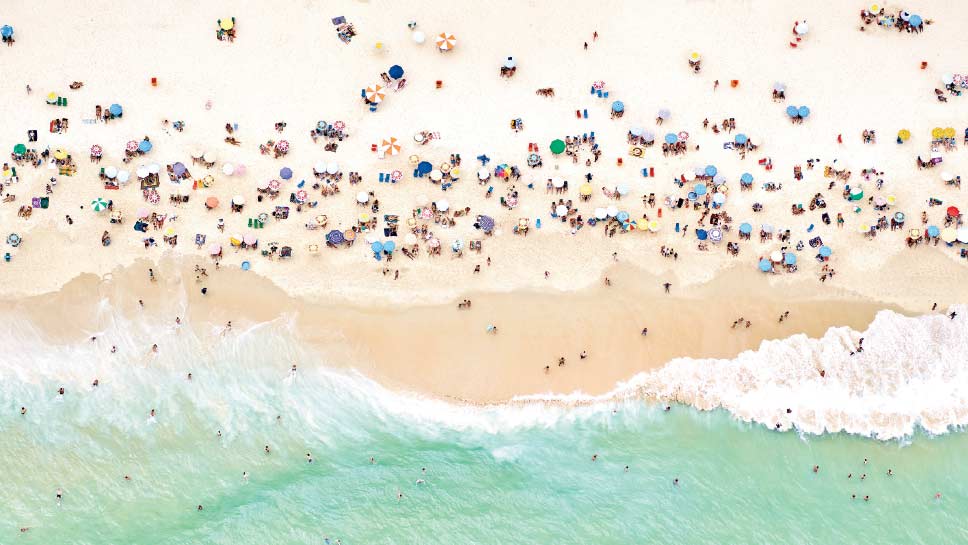 The photo artworks of Joshua Jensen-Nagle invoke a world of dream and memory. 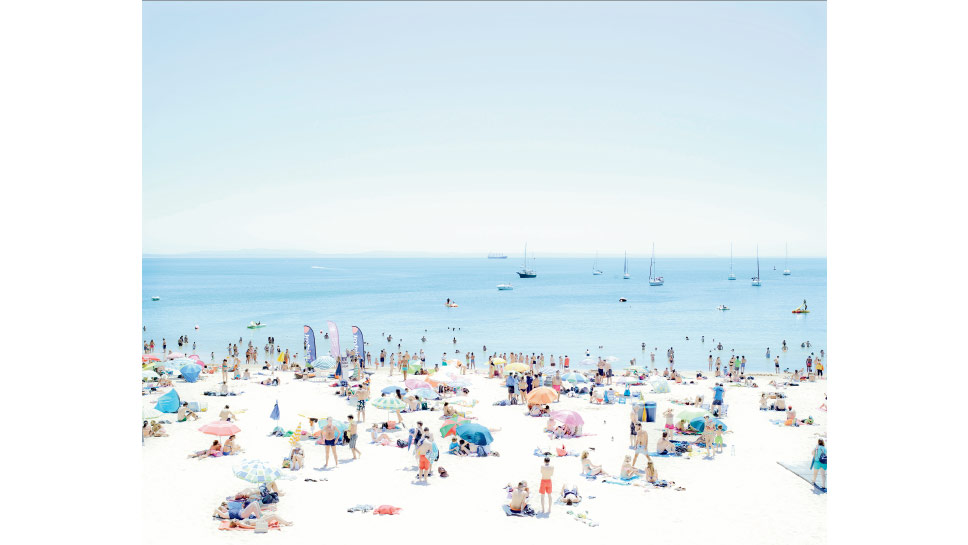 Raised in New Jersey, and relocated to Toronto for college, Jensen-Nagle spent childhood summers on the oceanfront at his grandfather’s cottage and began photographing beach scenes by the time he was 15. Studying photography at Ryerson University in Toronto, his early photographs were of city landscapes he could get to from campus. “But it took me a long time to find my own vision,” he says. “So much of what was happening then was conceptual or commercial and I just didn’t see where I fit in.” When he was a senior, Jensen-Nagle happened on a posthumously-published book of polaroid photographs by Walker Evans. “And I was just blown away! They were all shot with a SX-70 camera and the dreamy, soft quality of the images and color palate was incredibly beautiful. I had to experiment with this, so, I ran out to every pawn shop and thrift store until I found one.”

Jensen-Nagle used the SX-70 camera heavily for eight years, shooting a widening array of landscapes, beaches, mountains, and European vistas, creating his signature style, and experimenting to achieve different effects along the way. All of the works are large-scale because, from the start, Jensen-Nagle wanted the pieces to be “as large as paintings, more impactful—something you could stand back and really take in.” 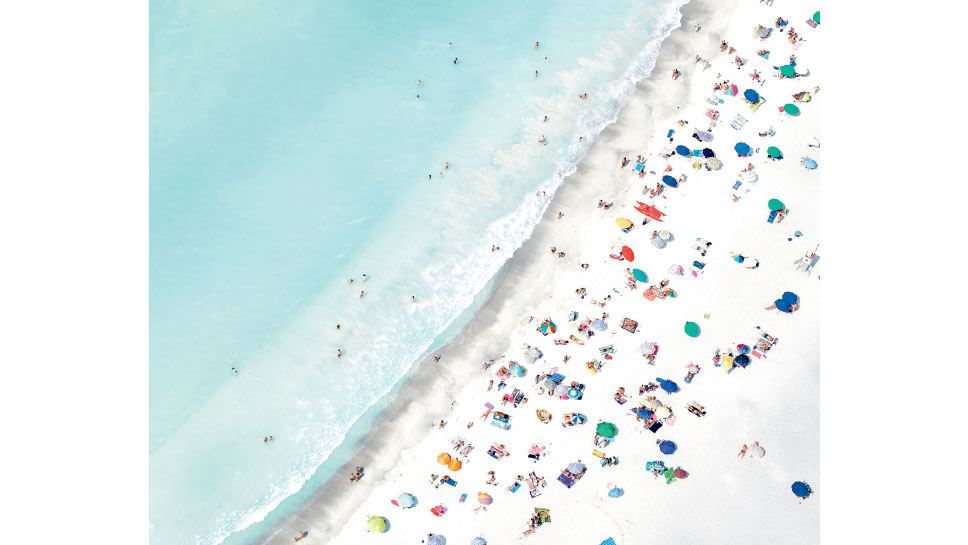 Early works—such as Jensen-Nagle’s 2009 “Thinking of Hockney” (which can be viewed at Loucks’ gallery) were more experimental, manipulated with paint, even dunked into fish-tanks of colored water, or photographed behind a shower of glitter, or in a room filled with smoke.

In more recent years, Jensen-Nagle has been shooting with digital technology, achieving his trademark milky dreamlike quality through printing methods and mounting techniques such as face-mounting the images to Plexiglas.

Three years ago, he also began shooting some of the images from a helicopter, satisfying his urge, “to shoot from a higher and higher vantage point, and with more control and efficiency than you might get by using a drone.”

Jensen-Nagle agrees that most of his work does have a whimsical, “happy” feeling about it.

But his newest body of work—photographs of glaciers which should make their way into galleries this summer—will have an added poignancy to them. 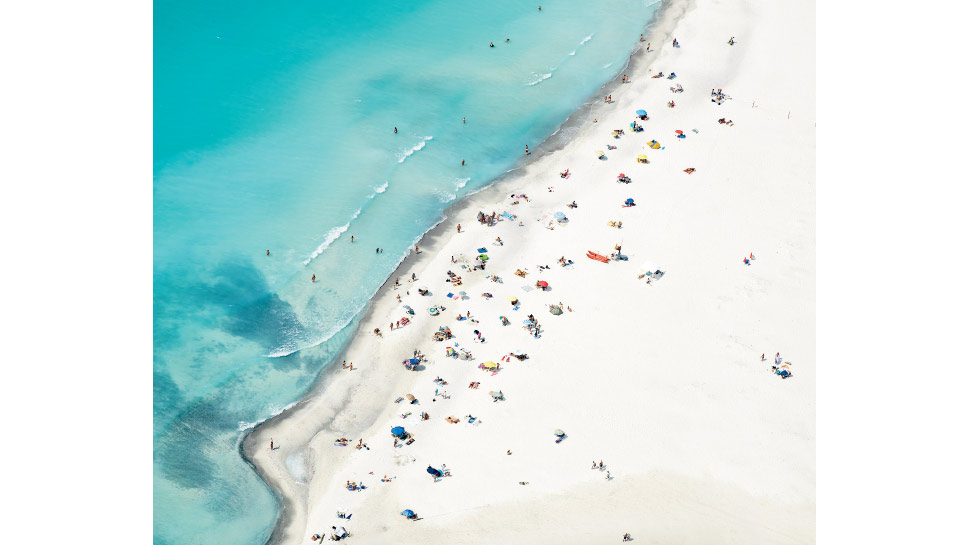 Drifting Over The Italian Riviera

“So much of my life has centered or revolved around beaches,” Jensen-Nagle explains, as he stands in his kitchen booking a flight to Argentina where he will be photographing glaciers next week. “It occurred to me that all that is happening with glaciers will ultimately, and intimately, affect beaches. If/and as glaciers disappear, so, too will beaches. It just made sense to me that I had to explore this connection photographically.”

Anne Loucks Gallery will be featuring Jensen-Nagle in the new group show “Photo 17: Alternative Perspectives” also including works from photographers David Burdeny and Maggie Meiners, December 1 through January 23. The opening reception is planned for December 2, from 5 to 7 p.m. For more information about Anne Loucks Gallery and the exhibition, visit loucksgallery.com.