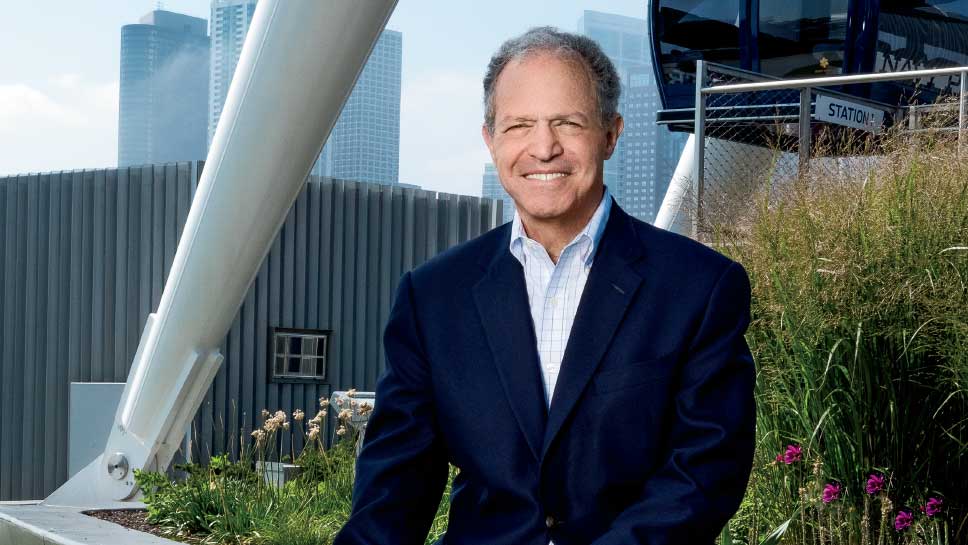 In 2013, Chicago Mayor Rahm Emmanuel approached William Brodsky about assuming the role of Chairman of Navy Pier. Brodsky, a New York transplant to the city, responded to his long-time friend, “I don’t know what you’re talking about.”

Five years later, Brodsky has undergone a transformation almost as dramatic as Navy Pier’s itself. “For someone who wasn’t as familiar with Navy Pier,” observes Marilynn Gardner, the President and CEO of Navy Pier, Inc., “he has clearly developed an unmatched passion for all that we are doing. From day one, he has stated that everything we do we’re going to do it right, and not cut corners.”

What they are doing is realizing the Centennial Vision, an evolving and far-reaching redevelopment framework unveiled in 2011, and devised to bring “the People’s Pier,” which opened in 1916, into the 21st century with new amenities, new programs, and new public spaces. “It is our mission to ensure that Navy Pier continues to inspire discovery and wonder, and that it is accessible to everyone as originally intended,” Gardner says.

Brodsky, who for 16 years served as the Chairman and CEO of the Chicago Board Options Exchange, did his due diligence while considering the mayor’s invitation (it was not a mayoral appointment). “What I knew about Navy Pier,” he jokes, “was the Chicago Shakespeare Theatre and attending charity dinners in the ballroom.”

Brodsky worked on Wall Street for 14 years before being recruited by a search firm to move to Chicago in 1982 to join the Chicago Mercantile Exchange as Executive Vice President and Chief Operating Officer. “It was the most challenging decision of our lives because I didn’t need the job, and we didn’t know anyone here,” he says. The challenge, though, spurred him to do it.

The family put down roots in Highland Park. “Because of the schools,” Brodsky explains. “My wife is a school teacher. My three sons were not thrilled we were moving so we picked an area comparable to where we were.”

Originally unfamiliar with Navy Pier, Brodsky now recognizes and promotes Navy Pier as the jewel in Chicago’s tourism crown. Last year it attracted just over nine million visitors, a record for the site. “I didn’t understand the concept of Navy Pier being ‘the People’s Pier,’” he recalls. “I started going with my wife, Joan, to see how people were using the facilities.”

What impressed him, he notes, was that visitors from every community and from all walks of life could come to the Pier for “a welcoming, safe environment.” Unlike the city’s world-class museums, he notes, there is no admission fee.

While the Ferris Wheel and the summer-month free fireworks shows on Wednesday and Saturday evenings are the Pier’s signature attractions, Brodsky immersed himself in its other wide-ranging offerings, including a gamut of eateries ranging from fast-food to white-tablecloth restaurants and the recently reopened IMAX theatre, to the more than 200 free artistic and cultural programs offered throughout the year.

“You can even bring your dog,” he adds enthusiastically. “The more I got involved, the more I committed to realizing the Centennial Vision.”

Brodsky sees his role as Chair of Navy Pier as a facilitator of Gardner’s and the Board’s vision. Navy Pier Inc. was spun-off in 2011 from the Metropolitan Pier and Exposition Authority (MPEA) as an independent not-for-profit. Beyond $115 million in seed money from the MPEA, the newly-formed Navy Pier Inc. board is charged with raising funds for the first major rehabilitation of Navy Pier since 1995, when the iconic Ferris Wheel was installed.

“My job is to make Marilynn look good,” Brodsky says. “Unlike her, I am not full time. I have no office at the Pier. I don’t receive a salary. I am a volunteer. I help with the strategic and financial decisions. We are not in maintenance mode; we are in a building mode. The goal of Navy Pier is not to make money as much as to have enough money to never run into deficit, and to have enough money to continue to improve things. Nothing is static. When they need me, I help raise money. I’m there to support them.”

Gardner says that Brodsky was instrumental in securing key financial gifts, including $20 million from the Polk Bros. Foundation as well as $5 million from People’s Energy. “He drove the organization to pursue financing for the Centennial Wheel (an all-seasons upgrade of the former Ferris Wheel that opened in May 2016),” she says. “He has such an understanding and vision for how to secure funding. He’s been an amazing partner.”

Gardner anticipates that the Centennial Vision framework projects can be realized within the next five years. Reflecting on his first term as Chair, Brodsky cited several redevelopment highlights of which he is most proud, including the completely renovated South Dock, and the installation of Polk Bros. Park, designed by architect James Corner, and which serves as the gateway to Navy Pier and features performance spaces.

He calls the new Ferris Wheel “spectacular. It’s state of the art, with completely enclosed, air-conditioned and heated cabins. My wife, Joan, isn’t big on heights, but she’s been on it ten times already.”

Last September saw the ribbon cutting for the Yard, a new third stage at Chicago Shakespeare Theater. The 33,000-square-foot expansion, which cost a reported $35 million, has a flexible design that could accommodate a theatre-in-the-round staging or a more traditional seating configuration. “It’s the first (of its type) in the world,” Brodsky explains. “I predict this will get international architectural acclaim.”

But Brodsky nor the Board are resting on their laurels. There is more on their to-do list, including a renovation of the outdoor Plaza space and renovation of the indoor Crystal Garden into a more versatile performance space. A private developer will soon commence construction on a hotel to be located on the eastern end of the pier.

“This is not a caretaker situation,” Brodsky notes. “Each step is a project onto itself.”

“It’s been rewarding to see William and his family—his wife, in particular—have really become passionate advocates for the Pier,” Gardner says. “They do spend time here. They bring guests here on a regular basis. They are clearly proud of what we are doing and they share that with anyone and everyone with whom they encounter.”

It’s not all glamorous. “We’ll be taking a walk,” Brodsky relates, “and Joan will give me a list of little things to take care of. She noticed that the garbage pails needed to be emptied quicker. Now they have a little electronic device that sends a signal when they are full.”