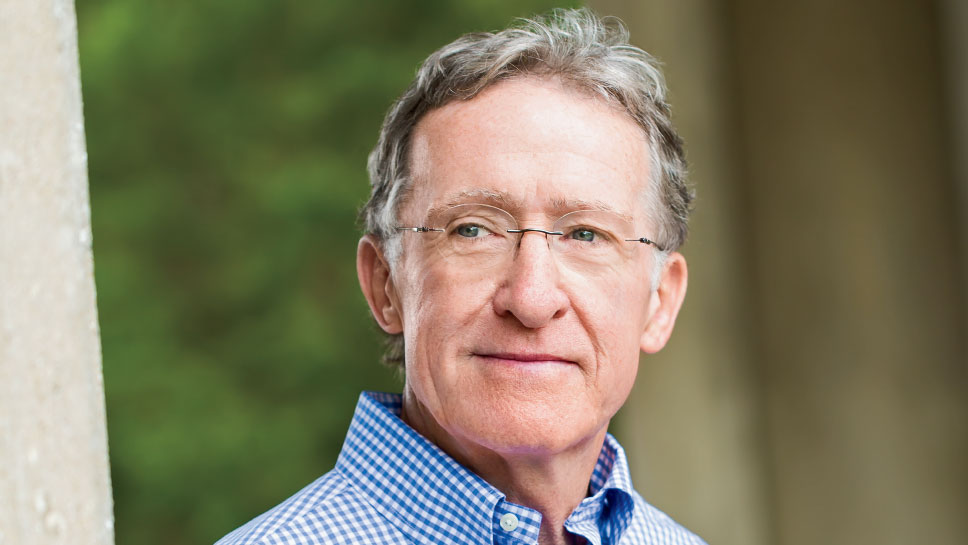 Former Today Show correspondent and Winnetkan Mike Leonard has made a career of telling the extraordinary stories of ordinary folks. Now, he shares his. PHOTOGRAPHY BY ROBIN SUBAR

Mike Leonard is a big believer in universal abundance—that the universe holds the answers to all of our questions if we’re open to finding them. And, he has a lifetime of unbelievable coincidences and near-miraculous experiences to back up this theory.

One quick Google search of Winnetka’s Leonard will turn up hours and hours of video feature stories he wrote and produced for the Today Show and other NBC news programs in his 32 years with the network. In his tenure, Leonard criss-crossed the country and the world, reporting on athletes, celebrities, and everyday people. So it’s difficult to believe that this impeccable writer and confident storyteller once found himself sitting in the back of a high school classroom wishing to be anywhere else.

“This morning I was walking up my driveway and I spotted the first acorn of the season,” Leonard says. “I had this momentary panic that fall is almost here and school must be starting.”

Leonard likely suffered from dyslexia that was never diagnosed, making it nearly impossible for him to read. But with a D-average, a fifth year of high school under his belt, and some stellar hockey stats—Leonard applied to college.

“I had no idea what I was doing, really,” Leonard says. “No kids from Chicago were playing D1 hockey. I just knew I wanted the chance and the Ivy League schools had the hockey programs. I applied to all of them, clueless at how my application must have come across in those admissions offices.”

About to give up, Leonard’s father suggested he apply to Providence College in Rhode Island. “Providence came to mind because my dad knew someone when he was a kid who played ball there and he liked him.”

Leonard was initially rejected. His dad then remembered knowing a priest he served with during World War II who was connected to Providence. He called him—even though it had been decades since the two had been in touch.

“I was walking through the airport when I heard my name announced over the loud speaker to pick up one of the courtesy phones,” Leonard remembers. “It was the athletic director from Providence letting me know that they were accepting me on academic probation. It was something out of a movie. It felt like everything around me stopped.”

Leonard played four years of Division 1 hockey and hoped to to play professionally. When he didn’t make a professional team, he found himself at a crossroad. Then he recalled an evening from high school when he saw a relatively unknown Bob Dylan playing at Ravinia.

“I wandered away from our group because I was curious about this skinny musician and his guitar,” recalls Leonard. “His lyrics were poetry to me. I was so mesmerized because for the first time I was understanding stories that I hadn’t been able to read. It was that night I realized my calling. I was going to do something creative—I didn’t know what that was. But I often say that you have to build a home to get to. Now, I finally had something out there on the horizon for me and I needed to start moving toward it.”

The only person Leonard told about his epiphany was his then-girlfriend, now wife Cathy—someone he’s known since the seventh grade.

“I once heard Bob Dylan interviewed and they asked him about the word ‘destiny’ because it appears so frequently in his music,” Leonard says. “When Dylan was asked if he felt destined, he said ‘no,’ but that he knew that his story had a different ending than anyone in his town had written for him. Dylan didn’t tell anyone of his dream because he thought it was too fragile, if someone had known of it, they might have tried to kill it.

“For me, it was the same thing. If I had told anyone other than Cathy that I wanted to do something creative, a kid with bad grades who hadn’t ever done anything creative before, they would have blown that candle out in a second—probably out of love—and encouraged me to do something more practical,” he notes.

“When I was in college, I wrote Cathy a letter every single day for four years,” he says. “I knew I was a communicator. I knew I could tell a good story. That practice of writing everyday, not being graded, helped me get better.” Leonard also used a movie camera he bought his senior year in college to compose stories using only pictures.

Leonard began to actively search for his creative home while living in Phoenix. By then married to Cathy with toddlers at home, Leonard held odd jobs to pay the bills. “It was a tough time,” he adds. “Cathy was in the hospital having just given birth to our third child Kerry. We didn’t have any insurance and the hospital said they needed $500 before they would let Cathy and Kerry come home.”

Unsure of what to do, Leonard confided to a friend. A few hours later, a white envelope with $500 was left in his mailbox. This same friend suggested Leonard consider doing something on television.

“I didn’t have anything more than home movies that I began shopping around to the local television stations,” he says. “I was rejected by all four networks. Finally, the public television station gave me a break. They hired me for $40 a week. It sounds ridiculous that I had a wife and three kids and took a job that only paid $40 a week, but I had to. It’s what I’d been working for.”

Soon, Mike was hired away by a local network affiliate. “I was doing sports, but I was doing it in a way people hadn’t seen before,” he says. “I wanted people like my wife who weren’t that interested in sports to like the stories I did.”

Just a little over a year into this job, Leonard was called in to meet with the owner of the television station. An NBC executive from New York had been vacationing in Phoenix and caught Leonard’s broadcast. He wanted him to become a correspondent for the Today Show. “The problem was that I had promised the station owner that I would work for him for two years,” he says. “But my boss insisted that I take the network job because this type of thing never happened.”

Leonard and his family moved to Winnetka where Leonard would file his stories for the Today Show for the next three decades.

“If I had the Waze app when I was 17 years old and it could have shown me what was ahead, I would never have taken that road. It was too scary,” he says. “I never would have believed that this kid who was too afraid to speak in class would someday give a live speech in front of 10,000 people, or speak to five million people on television. There is no way. Thankfully, we don’t have that ability to look into the future. Instead, we have to go out there and fight inch by inch. My limitations became my strengths.”