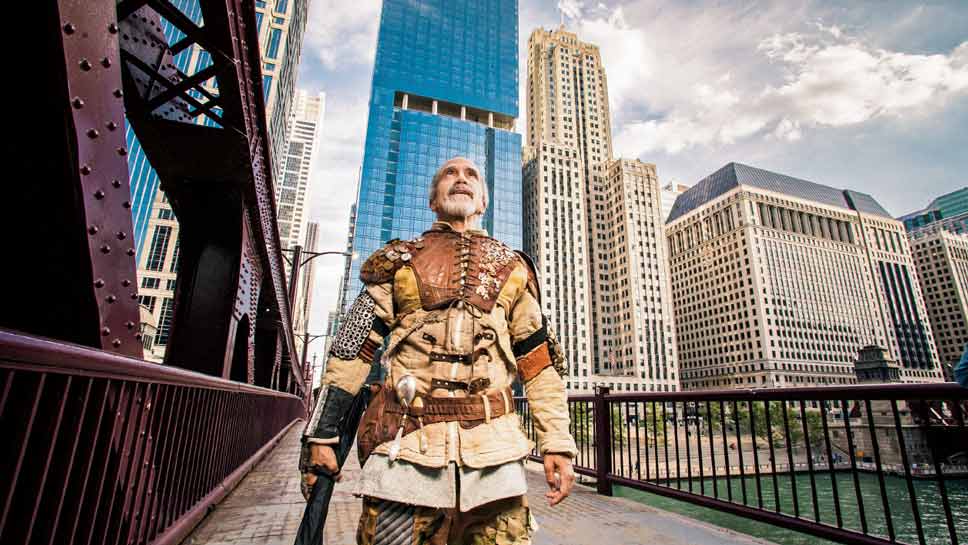 Henry Godinez brings Miguel de Cervantes’ iconic character to life in Writers Theatre’s Quixote: On the Conquest of Self. PHOTOGRAPHY BY JOE MAZZA

Henry Godinez set out on three quests in preparation for the titular role in Quixote: On the Conquest of Self, now playing at Glencoe’s Writers Theatre: diving deeply into Cervantes’ classic novel, letting his hair go wild to take on the appearance of the woebegone knight, and building endurance for the intense production.

“Claudio’s work has always been very physical,” Godinez says, referring to the play’s director, Claudio Valdés Kuri. “We have been undergoing rigorous physical training with the Actor’s Gymnasium. In addition to working hard on the text, we have to train our bodies just as fiercely.”

As an avid cyclist who regularly bikes Sheridan Road, this physicality is surely second nature to Godinez. The Cuban-born actor, director, and professor, who has lived in Evanston for the past two decades, has been a tireless contributor to the Chicago theater scene since he first moved here in 1984.

Godinez, who initially got into theater as a freshman in high school, began his acting career under Chicago greats Bob Falls and Barbara Gaines. Switching gears into directing, he co-founded Teatro Vista in 1990 to bring Latino productions to Chicago audiences. The company did a co-production with the Goodman, with Godinez joining their Artistic Collective in 1997, directing their adaptation of A Christmas Carol for six years.

He also served as the director of the Goodman’s Latin Film Festival. It was in this championing of Latino artists and audiences that he first came across Quixote: “I saw Claudio’s production in Mexico City. When I met with him, he proposed getting it translated and staging it at Writers Theatre.”

It comes as no surprise to Godinez, now a professor at Northwestern University, that Writers Theatre and the North Shore have become such burgeoning spaces for theater. “The ecosystem of Chicago theater has always been its patrons, and much of that patronage comes from the North Shore. It was a natural progression to support the creation and expansion of an excellent theater company in their own community.”

In this spirit of expansion, Godinez is thrilled to bring Latino projects to Writer’s Theatre as part of his mission to bring together Latino and non-Latino audiences. Familiar with straddling two cultures, with being “both,” he is eager to share this experience with audiences. “These themes are universal. This discussion enriches us all. My goal is for all of us to reflect on our experiences as human beings and, hopefully adapt and evolve in a way that is stronger and more inclusive.”

Quixote is about the iconic character finding himself alone and out of context; he is no longer in the novel, his world, but in the present. He dips in and out of the source material, the pages of the novel, with the help of the audience. “He comes to the realization that he is not necessarily a victim of his author, not a captive, but that the idea of him lives beyond the novel; beyond Cervantes.”

What survives is the idealism, the beliefs that make him who he is—serving the common good beyond himself. “The journey of the play is that it doesn’t have to end. We get to choose the breadth of our kindness. It’s about personal responsibility; seeing the evil in the world and knowing it’s up to each of us to make the choice to combat it.”

Quixote: On the Conquest of Self runs September 17 through December 17. For more information, visit writerstheatre.org.