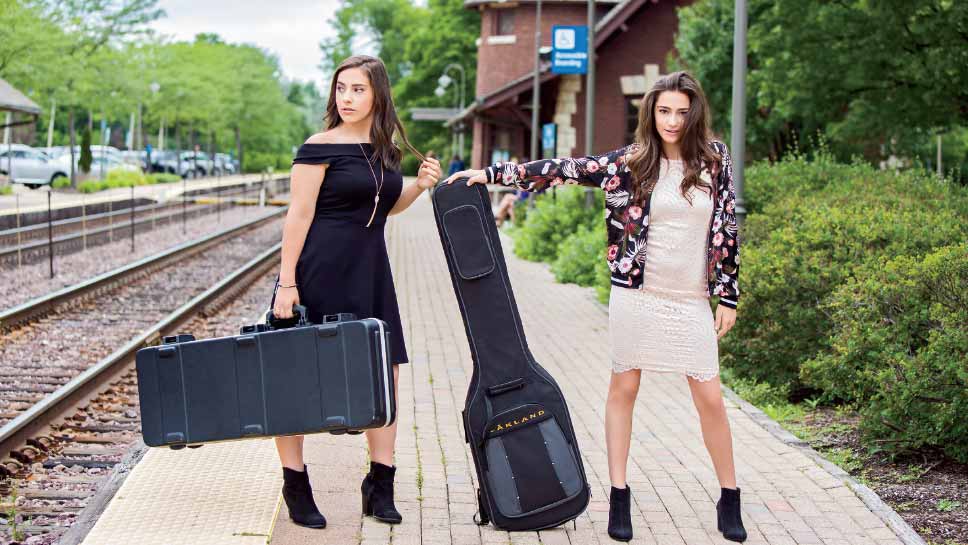 Rising pop superstars MARTINA and CARLY SPIRO talk their whirlwind success and prepare for star-studded performances in and out of the North Shore. PHOTOGRAPHY BY ROBIN SUBAR

September means falling back into routine for most. However, for 15-year-old Glencoe natives Carly and Martina Spiro, fall offers a nonstop schedule.

The girls took up piano at the Music Institute of Chicago at age four. Martina began teaching herself guitar and drums via YouTube videos and they both began learning music production. Singing and songwriting came naturally to the pair when they picked up the hobby at age 11. But, this was all just a matter of fun.

This changed when instances of bullying inspired the twins to co-write their first hit “Make Me Happy.” After recording the song at an Evanston School of Rock summer camp, the producer gave the girls a one song record deal. Before long, the song was heard on WGN Radio, inspiring many to reach out to the girls for their talents and story.

What came next? Parental approval. After begging their parents to take them to New York for a month, Carly and Martina were thrilled to have the support to go after their newfound dream. And yet…

“We got there and we realized we knew nothing,” shares Carly. “We knew we were going to perform; we just had to figure out how.”

They didn’t let this roadblock stop them.

“We went online and looked up every open mic in Manhattan. In that first week, all of them asked us back to do our own show. We went from no shows to shows every night.”

They stayed in New York for another month, performing at iconic spots like the Bitter End, the Sidewalk Café, and Birdland. Their whirlwind of performances included multiple events for Broadway Against Bullying with the cast of Wicked, playing with Lady Gaga’s trumpet player, and once back home, giving a presentation for TedxIIT in Chicago.

Today, the twins write and produce with talents from New York, Nashville, and LA and can eloquently explain the vibes of each vibrant location like natives. In both the writing and performing process, they play off each other’s energy.

“Pop is just what we write. It’s what comes out,” says Martina. “In terms of our sound, we really appreciate and are influenced by so many artists. But, our sound is us. We don’t want to be like anyone else. We believe we are truly original.”

Clearly, thousands of fans have picked up on the girls’ commitment to this unique sound. In June, a Lake Forest resident rented the Gorton Community Center’s 300-seat auditorium for Carly and Martina to perform as a benefit for LEAD, a substance abuse prevention organization. Both girls cite this packed and energized performance as one of their all-time favorites.

For these stars, the best is yet to come. Their schedule includes electric events such as the Unicorn Carnival at Coney Island with Disney star Alli Simpson and The Voice contestant Darby Anne Walker on September 17 and performing at the Big E with American Idol winner Nick Fradiani on September 30.

“My favorite performances haven’t happened yet,” says Martina. “We’re playing bigger shows every time. The shows we’ve played have been really cool, but as we keep going the shows keep getting better.”