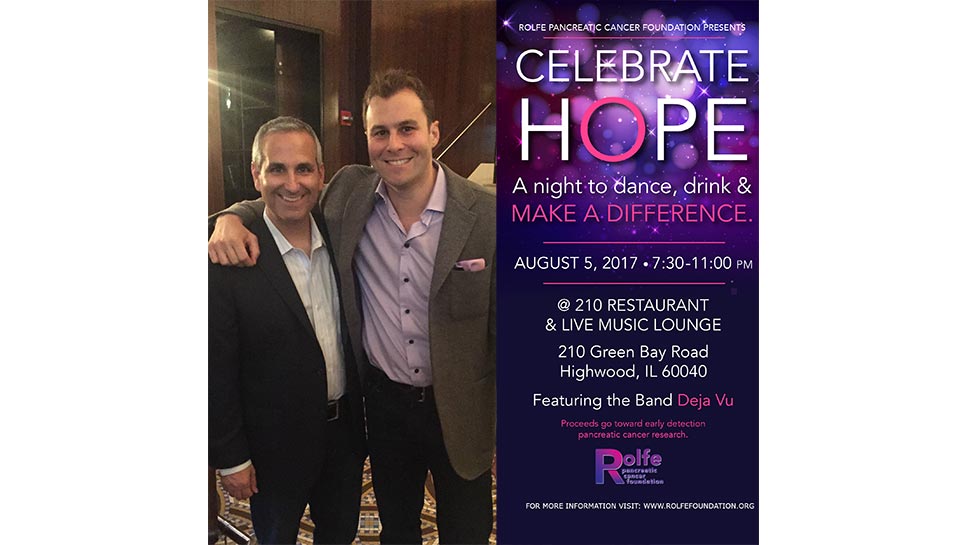 On Saturday, August 5, The Rolfe Pancreatic Cancer Foundation is kicking off an inaugural event at 210 Restaurant & live Music Lounge, “Celebrate Hope: A Night to Dance, Drink, & Make A Difference.” Co-chaired by Brian Blitz and Rachel Zucker-Sheinkop, this event will bring together the Rolfe Foundation and members of the North Shore communities to raise charitable dollars in support of early detection pancreatic cancer research. From 7:30 to 11:00 p.m., enjoy live music from the band Deja Vu, cocktails, appetizers, and a raffle while coming together for this amazing cause.

It is stories such as those of patient Derek Faust and his doctor Matt Adess which inspired this event. The two men, who first met in middle school in Highland Park, never imagined they would meet again under doctor/patient terms. Adess is the medical director of the Kellogg Cancer Center at Highland Park Hospital. “Of all of the GI cancers I treat, pancreatic cancer is definitely the most difficult,” says Adess. “This is why an effort is being made to make the diagnosis earlier and improve the treatment for patients who do have a chance of long term success.”

For Faust, the diagnosis came as a surprise as it does for many who face the same disease. “I had been experiencing discomfort in the abdomen for around six weeks which coincided with stress at work,” Faust explains. “I was certain I had an ulcer.”

After furthering testing, Faust became a pancreatic cancer patient at 41 years old. He was told that surgery was not an option and was given a year and a half to two years to live. Despite this original diagnosis, Faust beat the odds and became eligible for surgery after twelve rounds of intense chemotherapy over six months. “After healing from surgery, I went through 28 sessions of radiation with an oral chemotherapy. On November 23, 2016 (the day before Thanksgiving), I completed my last treatment,” shares Faust, who today has no cancer present in his body.

It is the work of doctors such as Adess who make stories like Faust’s possible. While Faust claims that he could not have beat this disease without his powerful foundation of friends and family, he also acknowledges his incredible medical team. “I am lucky to have been pointed in the right direction,” says Faust. “Matt Adess looked me in the eyes before starting chemotherapy and told me he was going to get me to surgery. He was right.”

For Adess, Faust is a true inspiration. The advancements in pancreatic cancer treatment have moved slower relative to other cancers, yet patients such as Faust do not let this discourage them. “There are people and situations that stick with you during your medical career that can make you a better physician, but more importantly a better person,” says Adess. “Derek has been absolutely amazing throughout this whole process.”

Both Adess and Faust understand the importance of foundations such as the Rolfe Foundation and of events like Celebrate Hope. For Faust, the Rolfe Foundation offered numerous resources within days of his diagnosis. “The Rolfe Foundation has been successfully shining a spotlight on the need for early detection and the event on August 5 will help raise money to further this cause,” Faust says.

In Adess’ eyes, the disease should be a cause of particular interest for the North Shore community. “I think that this is a very important event for our community. I have seen more cases of pancreatic cancer diagnosed in friends and parents in the last few years,” says Adess. “It is vitally important to continue the mission of early detection and better treatment so our community can have the best care and the best possible outcomes.”

Despite these statistics, stories such as Faust’s remain to inspire and provide hope for the many patients suffering from this disease. Joining the Rolfe Foundation at Celebrate Hope on August 5 means working together to beat pancreatic cancer, starting with advancing treatment for patients like Faust.

“Celebrate Hope: A Night to Dance, Drink, & Make A Difference” will be held on August 5 at 210 Restaurant & Live Music Lounge in Highwood. Tickets are available for $125. For more information, visit rolfefoundation.org.