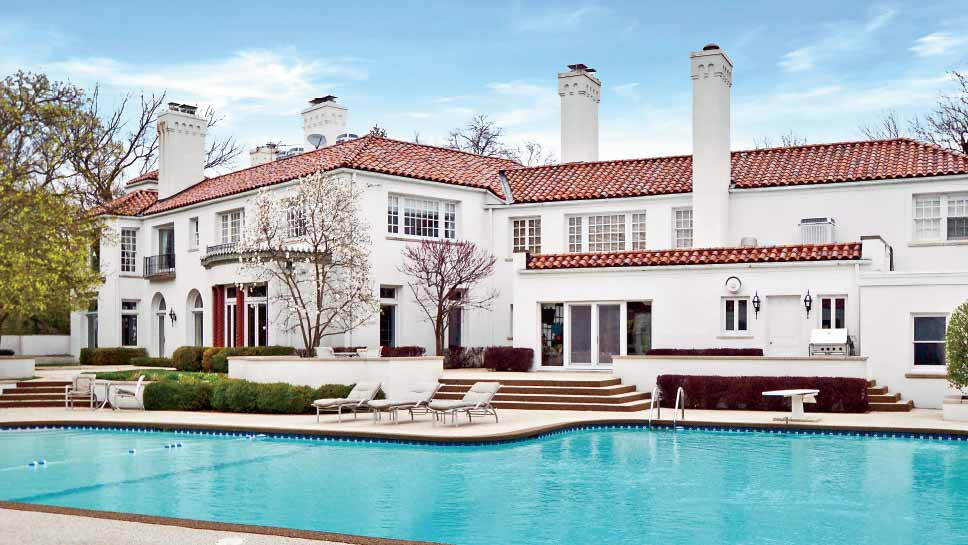 Designed by Chatten & Hammond—celebrated residential and commercial architects, both of whom lived in Winnetka—the house was featured as early as 1923 in photographs at the Chicago Architectural Exhibit at the Art Institute of Chicago.

The design team’s notable works also include the Ayres Boal Block in Winnetka in the Tudor Revival Style, the Columbus Park Refectory and Boat Landing, and later, along with prominent architect Dwight Perkins, the firm designed the Northwest Tower (1929), an Art Deco skyscraper in Chicago, and the Lawson YMCA (1930).

James Gifford Kellogg and his wife, Pauline Hull Kellogg—the first owners of 80 Locust—led a well-known Chicago family and owned many investment properties in Chicago, as well as a summer home in Lakeside, Michigan. The Kelloggs raised three children in Winnetka, who first lived in their prior home at 1214 Ash Street, also designed by Chatten & Hammond.

A Cornell graduate, James Kellogg, along with his brother Leroy, inherited the Kellogg Switchboard & Supply Company, founded in 1897, concurrent with the expiration of the patent for Alexander Graham Bell’s telephone. Their father, Milo, held more than 150 patents and invented the Divided Multiple Telephone Switchboard. 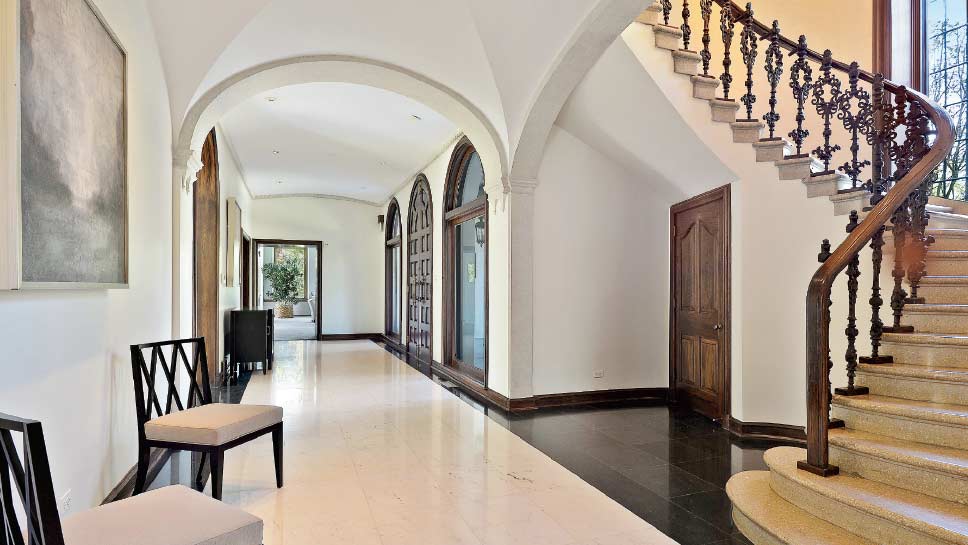 The company, best known for switchboard technology, manufactured art deco telephones. Both James Gifford Kellogg and his son, James Hull Kellogg, served as Chairmen of the company, which became ITT Kellogg in the 1960s and later evolved into Cortelco Systems Holding Company.

Pauline Kellogg, an artist and active Chicago philanthropist, hosted benefits, luncheons and weddings at her home. In 1940, she served as president of the Winnetka Garden Club, during the time the Club was recognized at the Navy Pier Flower Show. A lifelong artist, Kellogg exhibited three paintings at Chicago’s Hubert Ropp Studios in 1936, along with other notables including Mrs. Stanley Field, Mrs. Edward Swift, Jr., Mrs. A Watson Armour, III and Mrs. George Pond.

The current owner carries on the Kellogg tradition of entertaining. “This is a family home. For the 34 years we lived here, it was ‘the’ home where everyone congregated—family, friends, my children’s friends, their parents, you name it,” she said. The nearly 15,000 square-foot property—including the home, pool pavilion, and 4-car heated garage—was a welcome destination for celebrations of all kinds.

“We have had a lot of fun here. My dining table seats 24 to 36 for private dinners—and we had lots of them,” she continued. “There were three lovely weddings here, including my own.”

Echos of family lightheartedness can be felt throughout the spectacular home, including a chef’s kitchen, with a smart, casual eating area overlooking the pool and pavilion, a beautiful setting to accommodate summer parties and football Sundays, hosted at the house by her husband, a noted “Young Turk,” from the Chicago Mercantile Exchange. 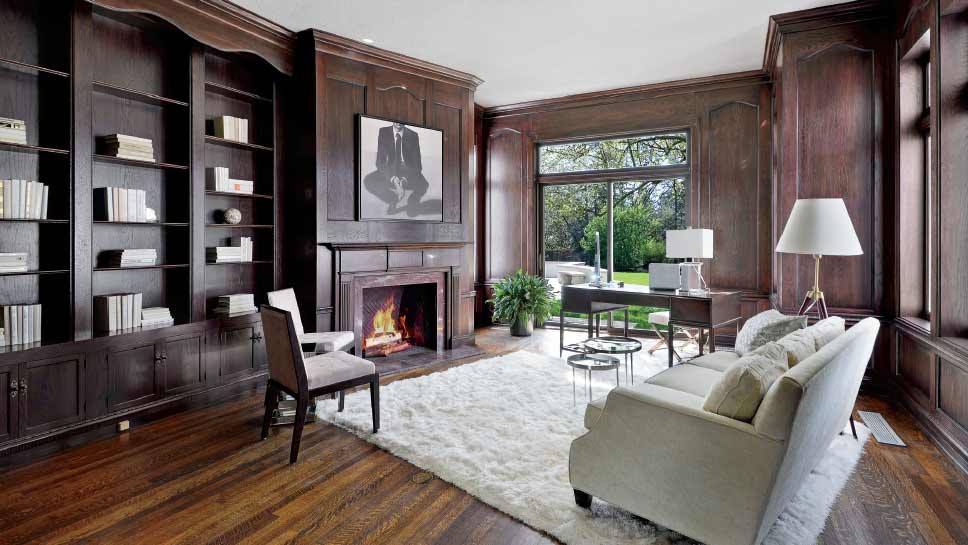 Sport was followed by festive brunches prepared by the current owner – four pounds of bacon, four dozen eggs, bagels, fruit, and pastries were the order of the day, to feed the dozen or so “regulars” who played on the nearly three acres of land, the largest parcel in the Woodley Road association.

The dramatic and delightful entrance to the home, with archways beckoning visitors, opens to a sweeping spiral staircase, featuring ornately carved metal balusters. The stucco walls and windows with elaborate wrought iron grilles and balconies foreshadow dramatic flourishes found throughout the home. 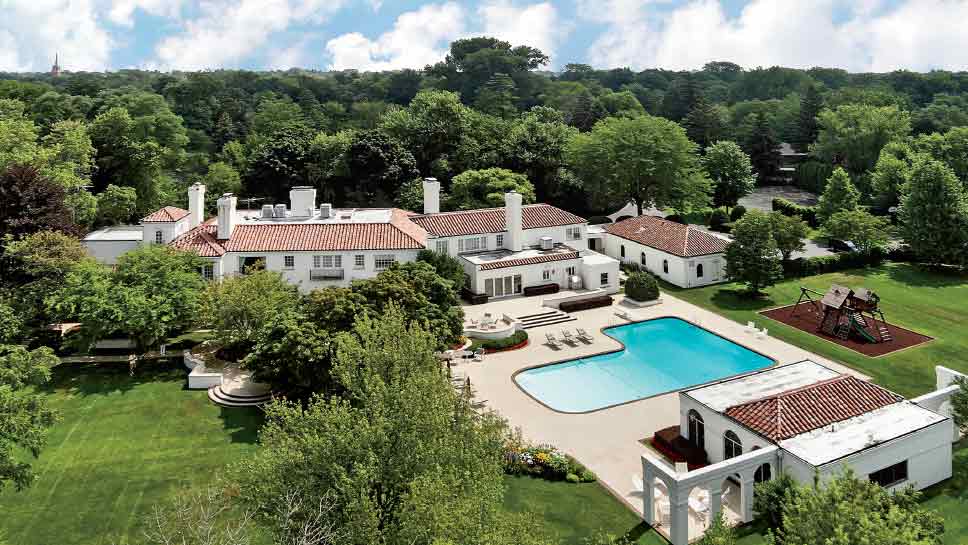 The home, with seven well-appointed bedrooms, five full baths plus three half baths, and beautiful views of the property, offers rare and coveted privacy. A highlight: the “Two-Story” Room, featuring a Juliet balcony overlooking the home’s sumptuous family/great room, offers a light-filled refuge to come together. “No matter where the party started, we ended up right here,” said the owner.

Looking ahead: “If a young family fell in love with this house, and enjoyed it as much as we have, that would be wonderful,” she concluded.