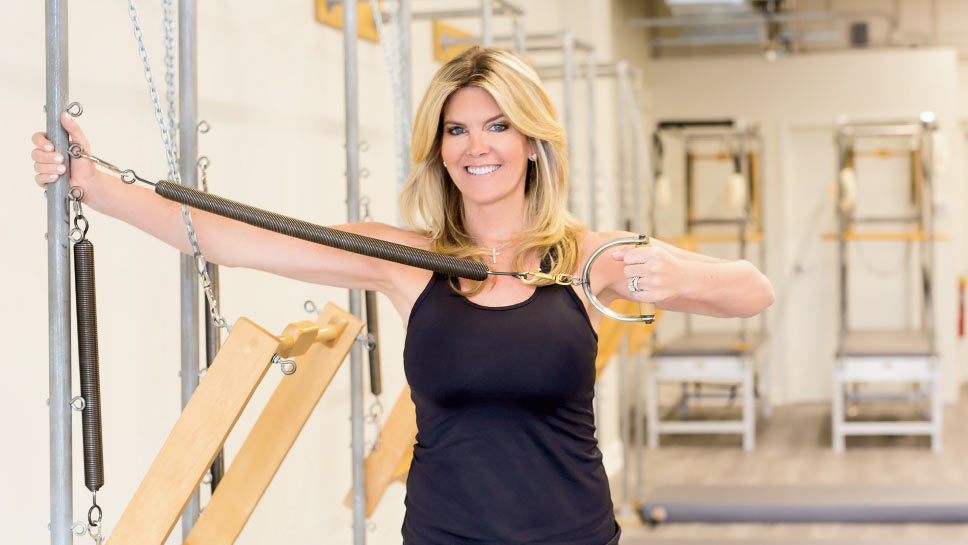 Ever wonder what’s in a name? Lake Forest entrepreneur Kristen Wolf asked this of herself when naming her fitness studio Superior Pilates.

“I always tell my team that we need to ‘be superior,’” explains Wolf. “This means that we need to offer our clients the best equipment, the best training, and an overall attitude of being your best self. Superior isn’t just a name for us—it’s a lifestyle we want to help our clients achieve.”

Wolf, Superior Pilates owner and instructor, began her athletic career as a ranked tennis player on the WTA tennis tour. It was while she was playing tennis that she had her first Pilates experience, and she quickly learned first-hand about its unparalleled benefits for physical fitness.

“I had been a competitive athlete for years and no one had ever told me what Pilates could do for my body,” she says. “Pilates lets you target and train the tiniest of muscles in your core that can make a difference in how you perform athletically—and in life.”

After Wolf retired from the professional tennis circuit and was studying at Northwestern University, she found a studio that taught the original Pilates method and began her training. She was tested and certified in New York by Romana Kryzanowska, Joseph Pilates’ protégé, after undergoing a rigorous 12 months in the training program.

Wolf then went to work, teaching Pilates in Evanston and Chicago—taking note of how she would set up a studio should she ever open one herself. Then 10 years ago, she found just the location in Chicago’s River North neighborhood and opened her first Superior Pilates, where all instructors were certified in the original Pilates method, Romana’s Pilates, and all equipment was built by Gratz—the company that built the original Pilates equipment 70 years ago and that still builds to the original specifications of Joseph Pilates.

“Pilates can make a difference to everyone, no matter their age, gender, or athleticism, women who are pregnant, and those whom have just had a baby,” she says. “I have so many clients who start by telling me that they are uncoordinated. I’m amazed at how quickly they impress themselves with the coordination they gain by practicing Pilates.”

Wolf, who also trains professional athletes, emphasizes that Pilates is not just for women. “It’s fun to train pro athletes because they are so in tune with their bodies,” she says. “It’s always rewarding to watch Pilates enhance an athlete’s game on the field.”

When Wolf moved back to her hometown of Lake Forest two years ago with her husband and three children, Wolf began to consider “what if” Superior Pilates opened on the North Shore. “My city clients used to call Superior Pilates their little oasis. I loved the idea of having this type of studio easily accessible to North Shore clients.”

Wolf closed her Chicago studio in April and is now devoting all of her energy to bringing Superior Pilates up north in its new location, just down the way from the West Lake Forest Starbucks. “We look forward to people learning more about us and how Superior Pilates can make a difference in their lives as a whole.”