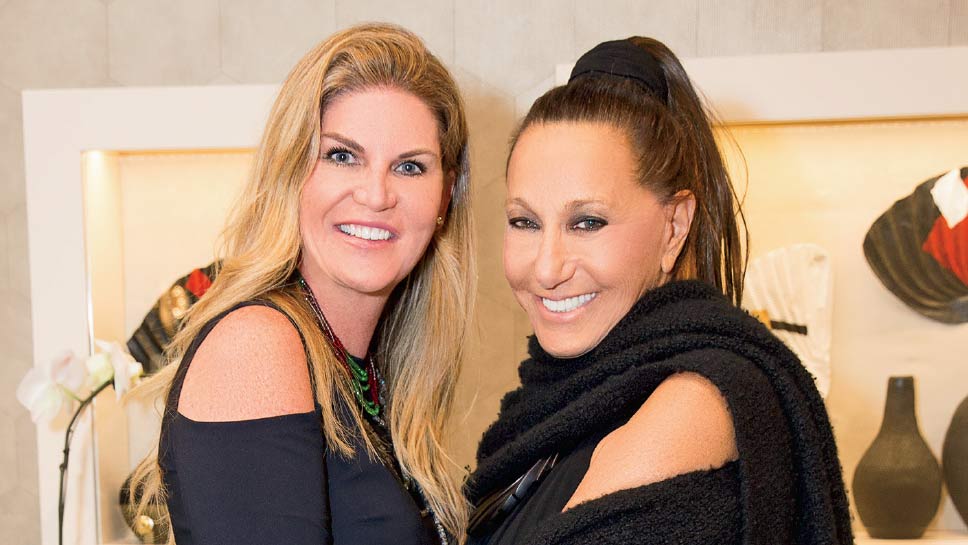 On a recent cold and rainy April afternoon, I sat with Donna Karan — the Donna Karan — on a velvet sofa at neapolitan in Winnetka. The situation had every potential to be intimidating. I loved her memoir, My Journey, which chronicled her turbulent childhood and charted Karan’s meteoric rise to become one of the most influential designers of our time. But could the lady herself be as funny, as open as the book? As I quickly discovered, when seated next to Karan, there was a warmth even the blustery weather could not dampen.

If you ever wondered whether fame and fortune have gotten the best of this self-proclaimed “awkward Jewish girl from Long Island,” banish the thought. She asked every person who sat down with her to share their story and inscribed each inside cover of her book with details of what she learned from talking and listening to them. After hearing a few of us have 11-year-old girls, she immediately pulled out pictures of her 11-year-old grandson while exclaiming “he is the best, isn’t he darling?” With this gesture, Karan showed herself to be so much more than a world-renowned designer and business woman and proved she is the ultimate bubbe and a shadchan in the making.

Self-effacing, funny, and unabashedly honest, talking to Karan felt nothing short of catching up with your best friend. Just like any friend, she had a serious side as well. When asked about the final chapter in her book, she responded with a raw honesty that illustrated the all too real pressures of “doing it all.” While she was finishing her book in late 2015, Karan was also secretly negotiating her departure from her namesake label of 30 years. “The last chapter was the hardest thing to do, bar none. I mean, BAR NONE. I was in the middle of negotiating leaving the company so I had to write the chapter as if I was still there. But I knew that I wasn’t going to be. So I wrote a fake chapter, and then they kept saying, ‘Donna the book’s due, the book’s due.’ I said ‘I’m not gonna be able to make it on time. We’ve got a little issue, issues I’m trying to deal with,’ and you know, nobody knew. Nobody knew what was going on and I couldn’t tell anybody. So the day the agreement was signed and settled, that was the day I gave the book in. It was like the last of what I had in me.”

Karan is legendary for the “cold shoulder” design she introduced to the fashion world some 30 years ago. She writes that it is the perfect design because the shoulder “never ages or gains weight.” Asked about this, she excitedly clapped as she said “That’s right! My shoulder and my under cheek are not the same. This is why the turtleneck happened with the cold shoulder. Things wrinkle and change. But you never gain weight on your shoulders!” At this point, I couldn’t help myself and said eagerly “I’ve got it on, the cold shoulder! I had to wear one in your honor because it is such an iconic piece, and today people say the cold shoulder and don’t appreciate that it was you who designed it!” “Yeah, I did it,” she responded pointing to herself as a broad smile crossed her face.

When I stripped off my blazer to show her my shirt, Karan jumped up and exclaimed, “OK, we need to do a cold shoulder picture. Let’s get together, we’re twinning here” as she wrapped her arm around my waist to pose for our shot. Standing there I looked at the long line of others anxious to spend a few moments with her and there was no doubt in my mind Karan would embrace each of them as she had me. I gathered my things and headed into the freezing rain – I couldn’t help but notice my shoulders didn’t feel the cold at all.