Pamela Sue Fox has taught enough girls to tap, kick, pirouette, and boogaloo to turn the entire North Shore into a Busby Berkeley dance number. Up to 5,000 girls over the years, she guesses. Though SNAP, her dance studio in Wilmette, has not turned out a Rockette or a prima ballerina assoluta yet, several girls who began dancing there are majoring in dance, and one has an offer from an emerging company when she graduates. Others have been admitted to exclusive summer programs with Alvin Ailey, the Milwaukee Ballet and Joffrey Ballet companies, and the Interlochen School of the Arts.

A dance teacher and choreographer at various studios over the years before starting SNAP in 2011, Miss Pamela—the genteel sobriquet by which she is referred to by students, parents and the community—was born into show business, albeit in a wholesome, Midwestern sort of way. Her grandfather worked for Paramount Pictures arranging test screenings in Cincinnati in the 1940s and ’50s, and her mother was a singer and dancer who even delivered singing telegrams for a while. Pamela recalls performing as a very young girl with her mother in small shows in and around Cincinnati. 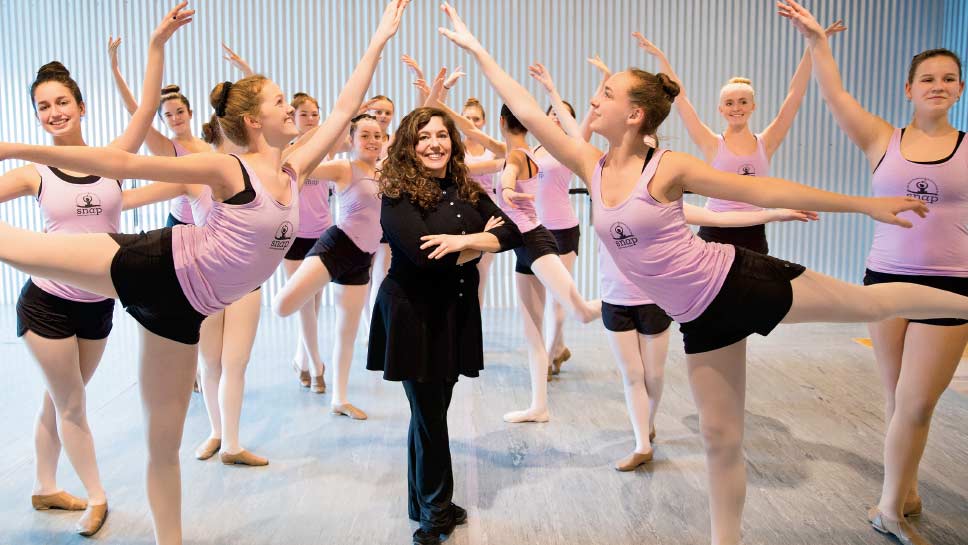 Wilmette’s Studio North Academy of the Performing Arts fosters a community and family built on dance. PHOTOGRAPHY BY ROBIN SUBAR

Kind of like the Pamela and Mom Cabaret Hour?

“Exactly!” She answers, laughing. “I’ve spent my entire life training in music, dance, and the theater, and I never had a doubt that I wanted to work in the performing arts.”

She performed professionally throughout Chicago and, she says, “I fell into teaching all over the North Shore, and I fell in love with Wilmette,” and the feeling is returned by students and their families.

“SNAP is a great studio,” says Stacy Hillyer, mother of Lauren (13). “Lauren’s learned that it takes persistence and hard work, and I think that has translated to school, too. If she has a math problem, she will hit that thing with the stick until it makes sense, and I think that comes a lot from what she’s learned from Miss Pamela.”

DeDe Glicken is the mother of Sami (17), Ari (13), and Taylor (10). “Miss Pamela is concerned with not only how they are doing in dance, but how they are doing as a person. She always wants to hear. She always asks questions and is genuinely concerned, and she is like one more person looking out for our kids. She’s a mentor, and we love that about her.”

Both students and parents refer to family when talking about SNAP and Pamela. Elizabeth Smith, a freshman at Loyola Academy, says, “Miss Pamela has impacted me as a person by demonstrating passion not only for the arts, but for each of her students. I have developed as a person through the relationships I’ve developed with my SNAP.”

Claire Zoller and Victoria Werth are both students at New Trier High School. “When you dance with people you become a family,” says Claire. And Victoria says, “Dance is a sport, but it is also an art, and it allows me to express myself artistically and emotionally. Miss Pamela emphasizes the importance of supporting each other and serving as role models. SNAP really is a home away from home.”

SNAP is preparing for their second Progressions Dance Festival in March. A dance concert organized by Pamela, it features dances by other studios and schools, including the Dance and Music Academy in Glenview, Mohler Dance Academy in Bloomingdale, Design Dance and the Joel Hall Dancers Youth Company in Chicago, and New Trier High School.

Pamela has shepherded kids through other dance competitions for almost 15 years, but she was troubled by a change she saw. “Not only is it financially almost impossible to do because it’s so expensive, but the focus has turned from making art to creating dances that will win,” she notes.

“I’m an artist first, and a technician second,” she continues. “Doing competition dances is fine and fun and part of the process, but really, we’re in this to learn the art, to excel at our art, and create art. So, I wanted to give the kids an opportunity to participate in something that was no pressure, where they could dance with other companies and share the stage with them, and enjoy themselves and share something with the community, as well.”

She loves Wilmette. “The generosity, the community focus, the way that people bond together. We, the kids, and the parents here are creating awesome art every day. Every day that I come here there is so much energy and focus and enthusiasm. I would expect that anyone who works in the arts, like me, would do this out of love and not for money. I know I would.” 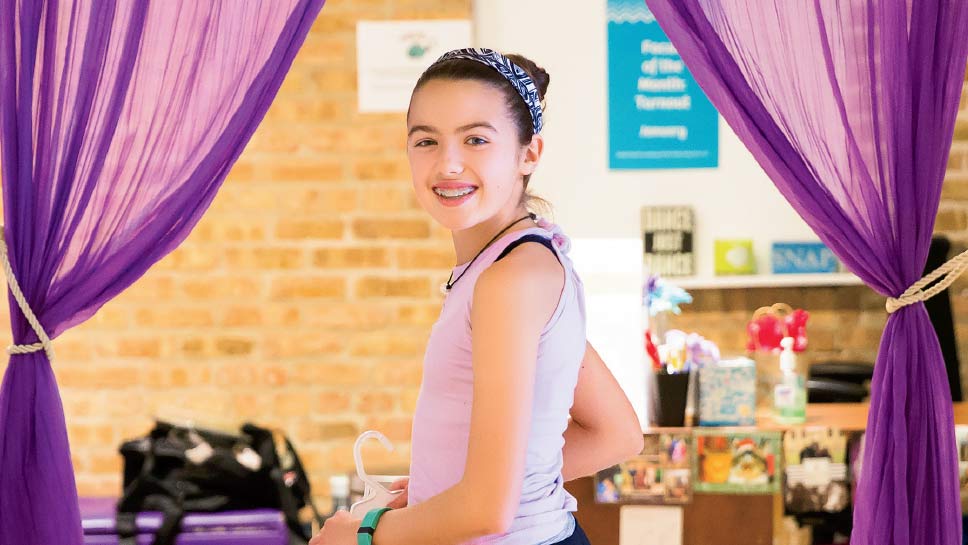