As a busy mom to three young boys, Glencoe’s Nicole Gordon found it difficult to push forward in her career as a working artist when she and her husband decided to call the North Shore home three years ago.

“You know how it is,” Gordon explains warmly. “Life can get so crazy. I kept thinking to myself that I’d start painting again when our house was finished, or when the kids started school. But the truth was that I needed to find peace in the chaos and let that inspire my work.” 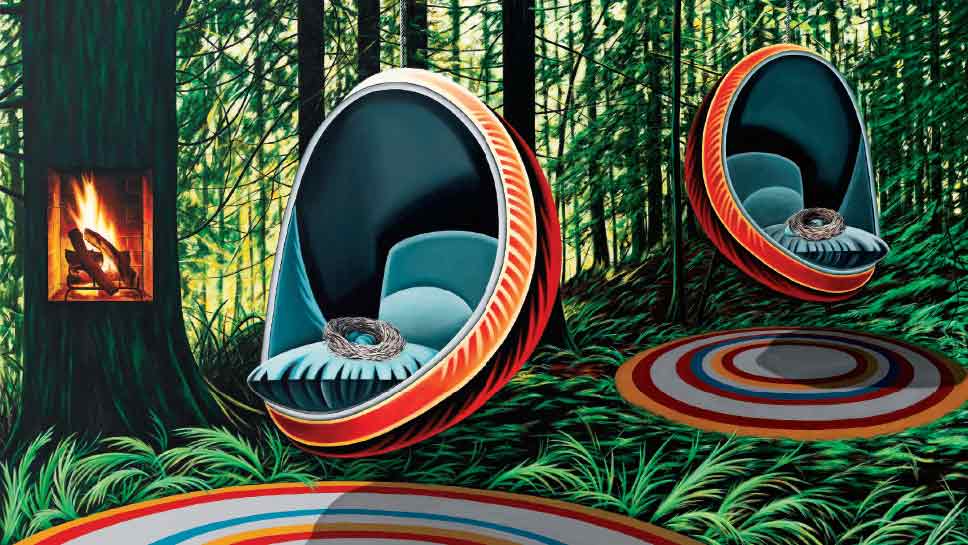 The frenetic pace of Gordon’s life set the stage for her most recent exhibit, Magnified, which was shown last spring at the Linda Warren Projects Gallery in Chicago. This exhibit set a series of exciting things in motion.

“I’ve never been much of a marketer,” says Gordon, a characteristic many artists might claim. “But someone from Hi Fructose Magazine saw Magnified and decided to feature my paintings in a 10-page spread. Then, I was contacted by a Spanish fashion designer called Armuseli—to create clothing items using my paintings. The current momentum is pretty amazing.”

The well-spoken, yet modest Gordon is now engrossed in her latest body of work that is scheduled to show in July at the Corey Helford Gallery in Los Angeles, one of the premier galleries of New Contemporary art. “While Magnified was about finding peace in the chaos, I’m flipping that idea and imagining what life would be like if we were given more space for quiet and reflective thought,” she says. “The narratives are the fantastical wild and crazy worlds that we can create for ourselves when we’re alone. Finding quiet, being reflective, and viewing the world creatively.”

This next solo exhibit of Gordon’s, yet untitled, will include 15-20 pieces at the gallery’s request, integrating a figure into each situation—typically in the form of a child.

“I’m very concept-based and series-based,” Gordon explains. “Typically, I have an overall concept for the entire series. Then, I find imagery that really resonates with me and fulfills that. I spend a lot of time creating the compositions. Sometimes I’ll create five, six, or seven compositions before I start painting them.”

Gordon keeps an ongoing database of imagery that she’s constantly referring back to. For this new body of work, she’s selected amusement parks and rides (many of them long-since abandoned) and things that mesh with pop culture iconography to convey her narratives. She’s drawing from experiences one has as a child and sometimes mixing them with something more sinister. One element that repeats throughout Gordon’s work is a teacup, reminiscent of the Walt Disney Mad Hatter Tea Cups ride. “The spinning teacup ride is something so joyful and so innocent, but also so terrifying and sickening,” Gordon says. “I think it is something most people can relate to visually.”

A third of the way through this new effort, Gordon is finding her color palette to be a bit darker and richer than past collections. “I might take a landscape and invert all of the colors so it’s not what you expected to see. My color selection is very dictated by a mood that I might be in or a path that I’m enjoying,” she says. “You’ll also notice that I’ve painted all of the figures in my paintings in black and white so they appear as ghostly figures. I want people to wonder if this is imagination, or reality, or just a dreamscape. It makes the narrative more obscure and more open to interpretation.”

Even as Gordon works up against an aggressive summer deadline, something she is driven by, she finds herself easily working on multiple paintings simultaneously and referencing female surrealist artists from the past.

“I recently realized that here I am, a female artist, and although I often reference a lot of art and art history in my work, I haven’t given a nod to many female artists in the past,” she says. “Part of it is that the female artists aren’t typically in your line of sight. So I started to do some research, specifically female surrealists, because I consider my work a contemporary take on surrealism.”

A standout for Gordon was Dorothea Tanning, an artist who made a name for herself for many decades throughout the 20th century, dying at the age of 101 in 2012. “I was a huge fan of Tanning’s in college and found myself recently reexamining her work. She has this amazing quote ‘Keep your eye on your inner world.’ That really is what this whole new body of work is about for me—not looking elsewhere for direction on where to forge your path. You have to find that direction and inspiration from within.”

Gordon will incorporate an installation art piece as part of her show in July, as installation art is such a significant part of the work she creates. “I had this idea to have a full-scale teacup that people could sit in and feel as if they’ve walked into one of my paintings,” she muses.

In spite of the growing demand for her work, Gordon finds the time when she is actually putting brush to canvas—whether the painting be large or small—to be therapeutic and meditative. “I don’t think I’m unlike many artists in that I have this almost compulsion inside of me to make art. It fulfills something that is unexplained and it’s here for me whenever I need it.” 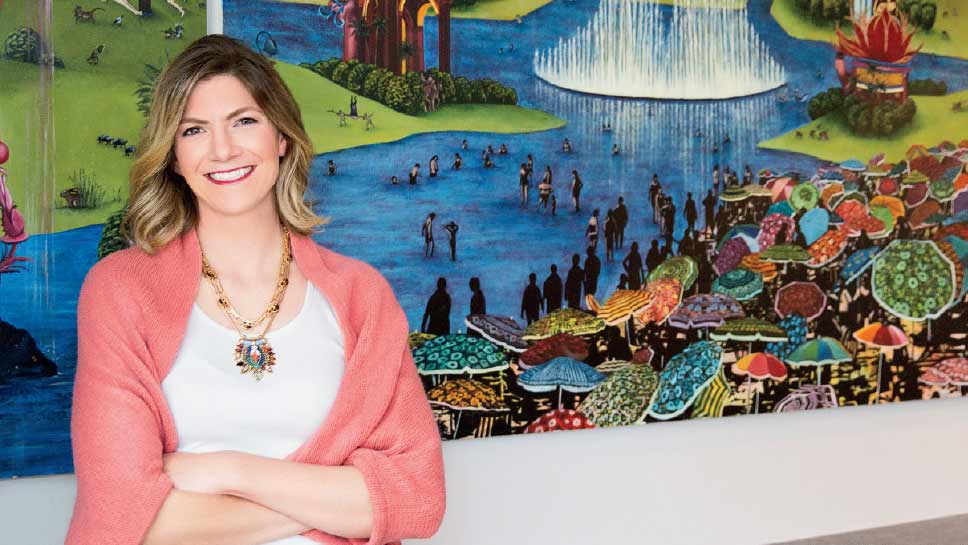 Nicole Gordon with her painting What Happens Here Stays Here 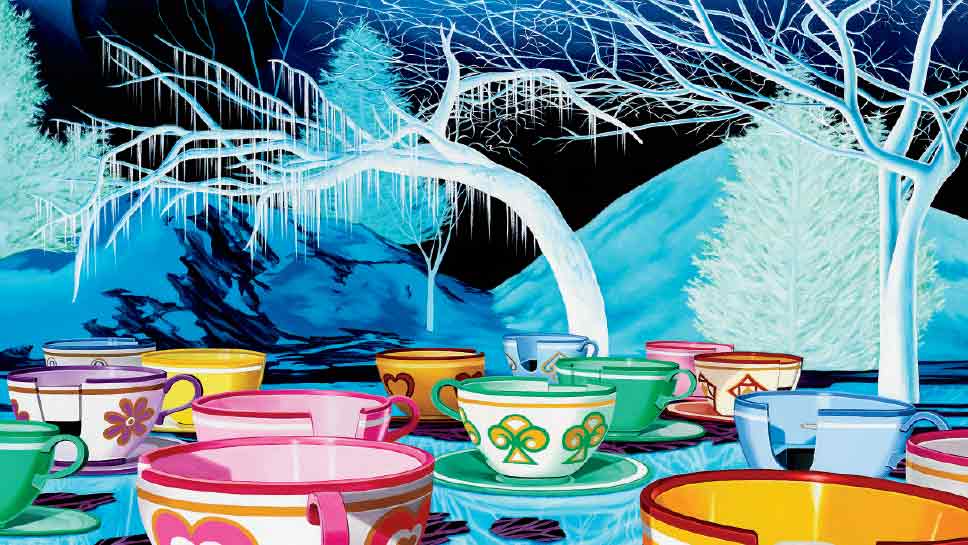