Stepping through the door of Boltwood is like stepping behind the curtain. Chef-owner Brian Huston has curated his space to reflect the ethos of his farm-to-table menu. From the wide-open industrial space of the dining room, with exposed ductwork and polished concrete floors, to the bustle of the kitchen staff visible in the open kitchen, you can see all the care and attention that goes into the fresh, delicious dishes before they arrive at your table.

Emphasizing seasonality, each menu is dated and has a space dedicated to listing the names of the farmers and vendors Boltwood uses. Another indication that our chef for the evening emphasizes fresh, local ingredients is a menu that employs symbols and punctuation, like the first dish we ordered off of the Snacks menu, la quercia ham + burrata cheese, grilled pears, plum mostarda and pine nuts. 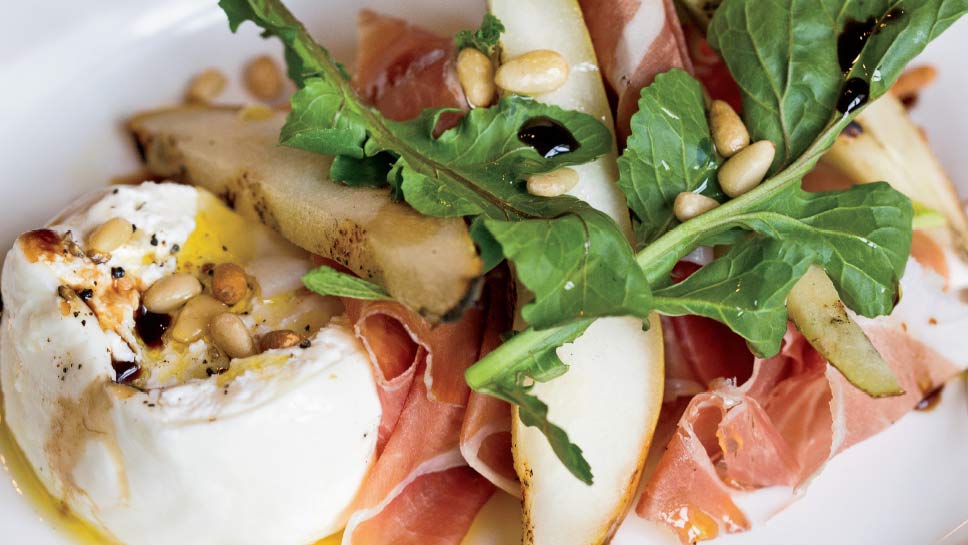 The headliner, the ham from Iowa, is incredibly flavorful, sliced prosciutto-thin, and piled atop the ingredients that follow the plus sign. A petite pillow of burrata cheese provides a creamy center with a salty sting that really stands out against the sharp arugula, pine nuts, mostarda, some red onion, and grill line-emblazoned sliced pear segments. Amazingly, every single ingredient is active within a bite. Though each flavor is bold and distinct, they combine expertly to create an inspired, unified plate.

Moving into the Meat & Fish menu continued the Boltwood kitchen’s run producing perfect, picturesque grill marks, this time displayed on the grilled swordfish. The fish was melt in the mouth tender and had absorbed a delectable smoky quality from the grill. Underneath it was a red pepper muhammara sauce that introduced a Mediterranean vibe and currants reduced to add a mild vinegar sting. A side of roasted cauliflower contributes a textural heft to the plate and emphasizes the delicacy of the swordfish.

Next, we dove into the half chicken + winter squash with an almond-pink peppercorn dressing, a very surprising take on chicken. Relying on an amazing infusion of sharp peppercorn flavor, this is a chicken presentation that courts a red wine pairing. Underneath a layer of delicious, crispy skin you find an incredibly succulent chicken that’s spicy, rich, and substantial. The winter squash is roasted and finished on the grill and marinated in the chicken’s juices, making it tender, pulling out some of the sweetness, and adding an earthy undertone to the dish. It’s a very inspired, welcome reinvention of chicken.

When we asked our waitress if there was an item to beat from the Vegetables section of the menu, she said that the crispy potatoes + garlic schmaltz were everyone’s favorite. That sentiment extended to our table as well. These potato wedges have a tantalizingly crispy exterior, like a broasted potato, with the potato skin still on and a smattering of chopped scallions mixed in. The dipping sauce has a mild garlic bent but gives a wonderful creamy counterpoint to the salty potatoes. These may be addictive.

The selections under Sweets & Cheese spawned a spirited dinner table debate, with items like chocolate Bavarian rice krispie bar and apple crisp with ginger yogurt, but we ended up going for the budino butterscotch pudding. Served with a thick layer of heavy whipping cream over a warm blanket of caramel sauce, this is a decadently sweet dessert with a crisp, caramel oatmeal wafer standing like a sail to add a brackish counterpoint.

One last note on the origin of the restaurant’s name. Huston grew up in Evanston before honing his cooking style at restaurants all over the US and Europe. When he returned to open the doors of his own establishment, he chose a name associated with the freshman wing of Evanston Township High School, Henry L. Boltwood School, to symbolize his own new beginning. 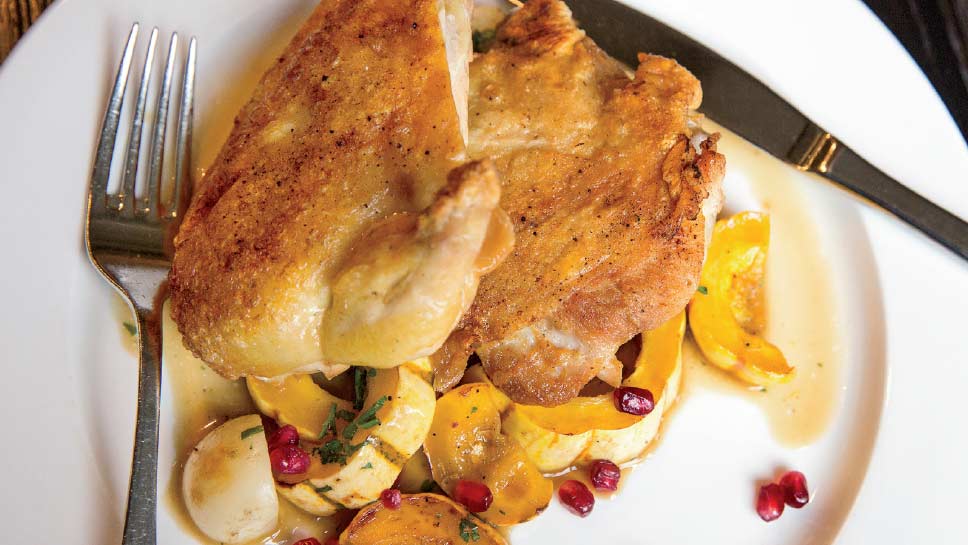 Half chicken + winter squash with an almond-pink peppercorn dressing 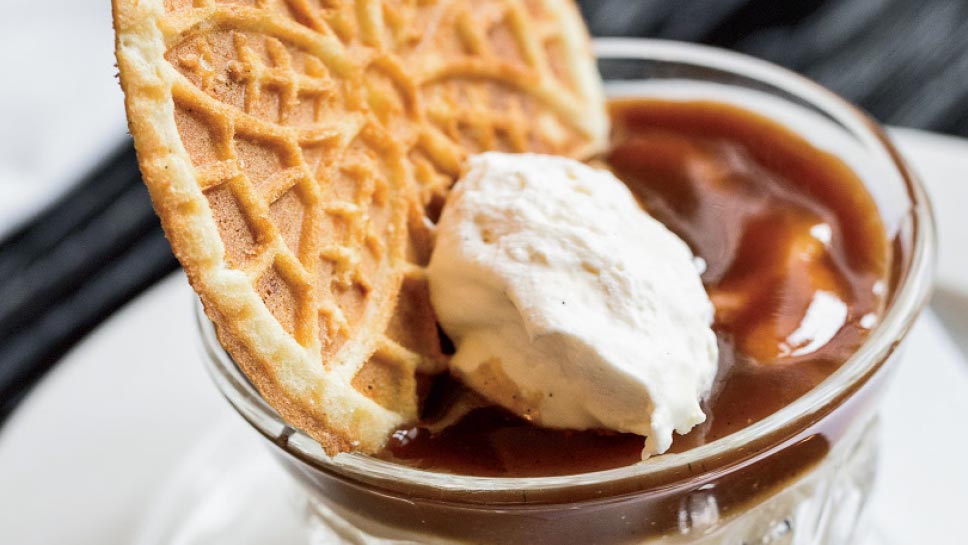