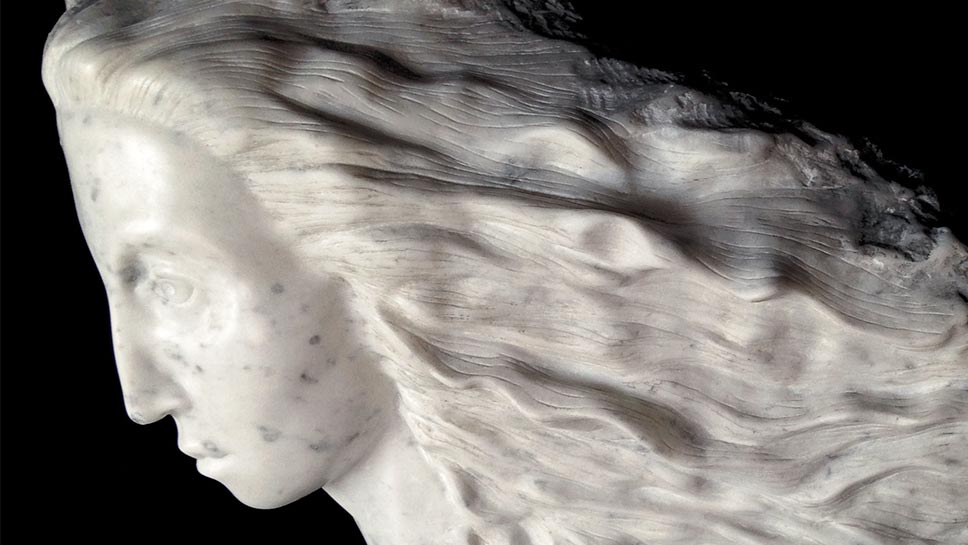 When I met Chicago based sculptor, painter, and playwright, Jyl Bonaguro, she was getting ready to move into her new studio and awaiting a 3,400-pound shipment of statuario marble from Italy. As one of the rst tenants to move into a newly renovated creator space on West Diversey, Bonaguro will now have access to a loading dock and forklift to accommodate the mammoth marble deliveries required in her work.

As one of six siblings growing up in St. John, Indiana, (third generation Italian on her father’s side), Bonaguro recalls “we were raised as if we were only Italian, even though we were Americans of mixed heritage which included Polish and Slavic. My father prided himself, too, in that his four young girls were all raised like boys.”

Bonaguro, now 40, had a childhood full of possibilities. Her father, an orthodontist, and her mother, first a nurse and then a stay-at-home mom, encouraged her to become the only girl player on the boy’s soccer team. This basic premise of not accepting limits set the stage for what would become Bonaguro’s fearless approach to creating art. In both her sculptures and in her plays, we find work hinged on questioning assumptions about female identity and equality between the sexes.

Starting out as a painter, Bonaguro’s love for working across disciplines was always present. At age 6, she wrote her first poem. In high school, she took two college figure drawing classes at the School of the Art Institute of Chicago (SAIC) for pre-college credit, and was formally educated in art, design, and creative writing as an undergraduate at Loyola University.

“As a little girl, at our lake house in Michigan, I kept a drawer of stones worn smooth by sand and water,” Bonaguro said. As a sculptor, her relationship with stone manifests itself in a variety of ways, not the least of which is in her good-natured obsession with the Asian concept of the philosopher’s stone—the belief in the ancient wisdom and healing properties of stone.

This past summer, Bonaguro’s quest for the perfect stone sent her on a journey to Pietrasanta, Italy to train in stone carving and to search the same quarries that provided marble for Michelangelo’s David. “I’m a self-taught marble carver, and after a year and a half of working by myself on my first marble sculpture series, Remnants, I was amazed to visit this area filled with stone carvers with incredible amounts of knowledge and history,” she says. “My goal is to carve a marble female gure at the same scale (over 15-feet tall) of Michelangelo’s David.” Bonaguro’s figure will be based upon the goddess Athena, and named “Modern Athena,” symbolizing female strength, beauty, and wisdom.

Bonaguro finds similarities working in mediums as divergent as sculpting and playwriting and says that both become narratives with a similar need to tell a story. “In each case, I am presenting someone with an object or words to interact with.” Dedicating certain hours of the day to each type of work, “I like to write at night. For sculpture I need strength and daylight for such labor intensive work, so it makes sense to do it 9 a.m. to 5 p.m., when I am less physically tired,” she adds.

Bonaguro counts many North Shore collectors as clients. Highland Park art collector Rick Fenton notes, “In Bonaguro’s sculpture, the real or life-like subject matter becomes surreal. I’ve never seen another artist who translates the human form into works of art that can leave you as breathless.”

In her latest sculptural project, Bonaguro is creating a Wing Series in marble. The first in the series was exhibited at Aqua Art Miami 2016. The wings themselves become an exquisite consideration of the traditional limits of stone, as if they might be preparing to step off their base into flight. It seems Bonaguro and her work defy limitations.