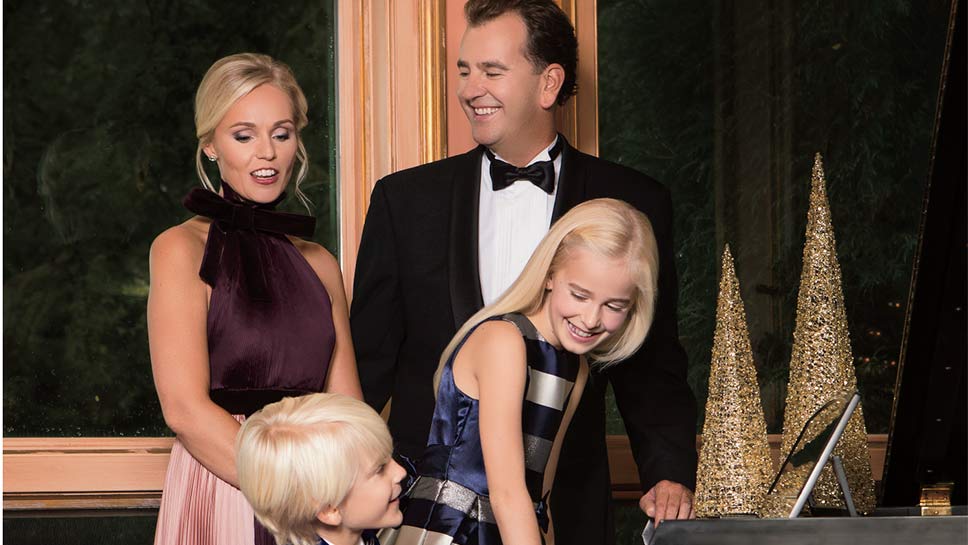 One family shares holiday traditions gleaned while living in some of the world’s most beautiful cities. PHOTOGRAPHY BY MICHAEL DAR

Linda Sterckel will always remember the Christmas she spent with her family in Montreal. “We had nearly seven feet of snow that year, and all of our family flew in to celebrate with us,” she recalls.

That holiday visit was especially meaningful to the Sterckels—as it was the first holiday spent in Montreal after relocating from the Netherlands, where she and her husband hail from and had previously spent their holidays. It was also the first year they realized they might need to have a chat with their two children about Santa Claus—a tradition different than that of the Netherlands’ Sinterklaas, or Saint Nicholas.

“This is a really big Dutch tradition,” says Sterckel, who notes her anticipation each year as a child when she would put out milk and carrots for Sinterklaas and his horse. “The story my parents told me is that he comes from Madrid to the Netherlands on a boat, and every year he chooses a different harbor so that he can visit all of the children.”

And while the stories of Santa Claus and Sinterklaas seem similar enough (they both have beards, bring presents, and enter the house through the chimney), there are enough differences in the stories, too, from the character’s place of origin and body type (one is a little thinner than the other), to the dates—the latter visits a bit earlier in the month, on December 5. “The more countries you move to, the harder it becomes to explain the differences in these traditions to our children,” notes Sterckel.

Still, the family does a remarkable job of keeping up. To date, they have lived in more than four cities beyond the Netherlands—Montreal, Rome, Paris, and now, Lake Forest—and have participated in the traditions of each. In Rome, that meant visiting Piazza Navona, the Spanish Steps, and St. Peter’s Basilica to see the many nativity scenes on display, and indulging in one of Sterckel’s favorite holiday treats: Panettone, a traditional Italian Christmas bread made with currants. They also enjoyed seeing the town’s spectacles of Befana, a folklore character of an old woman who delivers gifts to children throughout Italy on January 5, the eve of Epiphany.

In Paris, the Epiphany is also known as La Fête des Rois, or Three Kings Day—a favorite for Sterckel’s children because of the iconic Galette des Rois that it entails. “They’d go to school and have this cake that had a bean hidden in it,” she explains. “If you get the slice with the bean, you could be King or Queen for the day—they loved it!”

Their first Christmas spent in the City of Lights was one of Sterckel’s favorite holiday memories. “We invited my husband’s parents to have dinner with us on the Eiffel Tower, and it was incredible,” she says. “We hadn’t celebrated Christmas in a long time together with family in the country we were living in—it was very special.”

Beyond that first year in Paris, the family made the trek back to the Netherlands each Christmas (a four-hour drive from Paris and a two-hour flight from Rome), where they would spend the first day with one side of the family, and the second day with the other. The following year, they would switch up the order. “For us, a normal week in the Netherlands might mean driving 2,000 kilometers just to see all of our friends and family,” says Sterckel. “It’s a lot of planning, but it’s important to see everybody.”

When it came time for New Year’s Eve celebrations, the family would return to Paris or Rome, bringing with them the traditions of the Netherlands to their newly inhabited cities. One year proved to be particularly noteworthy. “I remember the first time we had our Dutch friends over for New Year’s Eve in Paris, and they brought fireworks because there are fireworks and parties everywhere in the Netherlands on New Year’s Eve, whereas the streets in Paris and Rome were always so quiet,” says Sterckel. “A week after we set them off we saw an article in the paper saying it was illegal to do so—so we never tried that again!”

This year marks the first year the family will spend Christmas in Chicago, and according to Sterckel, it might be her most unforgettable one yet. “My husband told me this year is going to be the most memorable Christmas we’ll spend together because he’s going to surprise me—but I have no idea what he’s doing!” she says. In the meantime, she’ll plan what she can. “I want to host a nice dinner, and I might make a turkey because I’ve never done that,” confides Sterckel, who is also penning an Italian cookbook at the moment.

And while she once considered the Netherlands to be home for the holidays, Sterckel is now recognizing the feeling as being much closer than that. “Home is where the four of us are,” she says. “We’ve moved to so many places, so it’s really just about when we are all together. That’s where home is for me.”